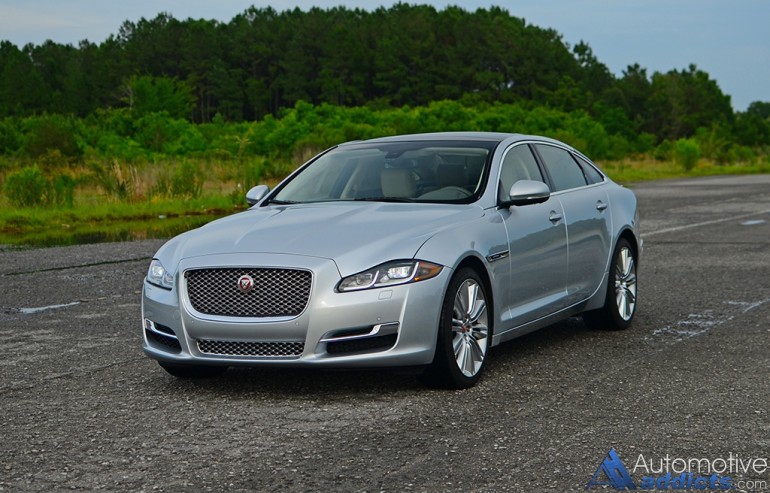 Jaguar vehicles are undeniably special in their indicative British roots and unique design aesthetics. In the full-size luxury sedan segment, there are only a few top-of-the-food-chain vehicles that come to mind that appease a select number of consumers who indulge in living in the lap of luxury. Fortunately, Jaguar has just what it takes in their latest XJ, which is refreshed to once again to fit the proper mold of a top-tier full-size luxury sedan.

>> Get the best price on the Jaguar XJL from a network of local dealers now. <<

Picking a fight with the Germans in the full-size luxury sedan arena is no easy feat. Though, Jaguar enters the ring as somewhat of an underdog but has a fair chance of concluding the fight to walk away with earned respect. It’s not to say that the 2016 Jaguar XJ falters against its direct competitors, it’s only to recognize a unique approach to counterpunch the BMW 7 Series, Audi A8, and Mercedes-Benz S-Class. 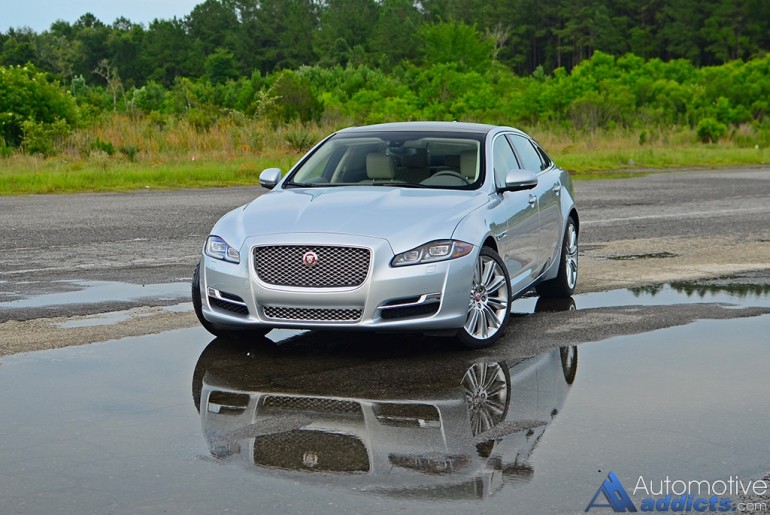 In my latest exploit in the driver’s seat, the 2016 Jaguar XJL Supercharged has graced the Automotive Addicts garage getting a thorough workover. Sporting the brand’s 5.0-liter Supercharged V8 putting out 470 horsepower and 424 lb-ft of torque to power the rear wheels through an 8-speed automatic transmission, the Jaguar XJL Supercharged trim in my possession is quite the road hog bathed in English lavender and dressed in a British spy tuxedo. If you want to understand why Jaguar chose to supercharge the engine over turbocharging, check out drifted.com’s excellent turbocharger vs supercharger article. While the new 2016 XJL in its long wheelbase form doesn’t have the athleticism that James Bond would prefer, it does, however, have substance to appease those in a hurry make it to the Opera on time in stately fashion. 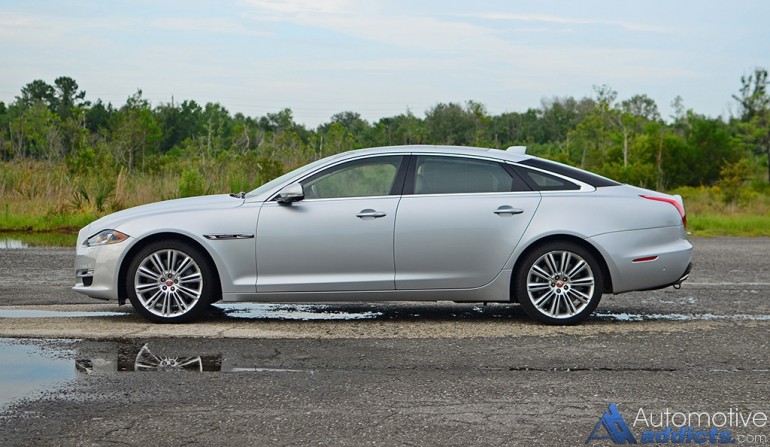 Reaching 60 mph from a stop in 4.5 seconds, the 2016 Jaguar XJL Supercharged V8 has finesse, keeping its large mass mostly civilized for legal road maneuvers and effortless highway cruising with a careful eye on local State Troopers. The new XJL does what you want, mostly. Most of its ease of driving is attributing to the lightweight aluminum construction, nearly emitting an illusion of a heavy mass due to its bubbling but good looking curvaceous exterior proportions. While the Supercharged V8 is a serious statement for a purring Jaguar, it is more than enough to have a little fun with such a large vehicle. In its rear-wheel-drive configuration (AWD not available on XJL Supercharged V8 trim), the back 20-inch tires beg for traction. Body roll appears to be quite noticeable, even with the subtle Dynamic mode enabled where the active dampers attempt to firm up the rebound. Otherwise, ride quality is superb for a suspension system that doesn’t use an adjustable air setup. The XJL eats up bumps and road imperfections without upsetting the balance. Overall, the elongated body retains a supple ride quality. 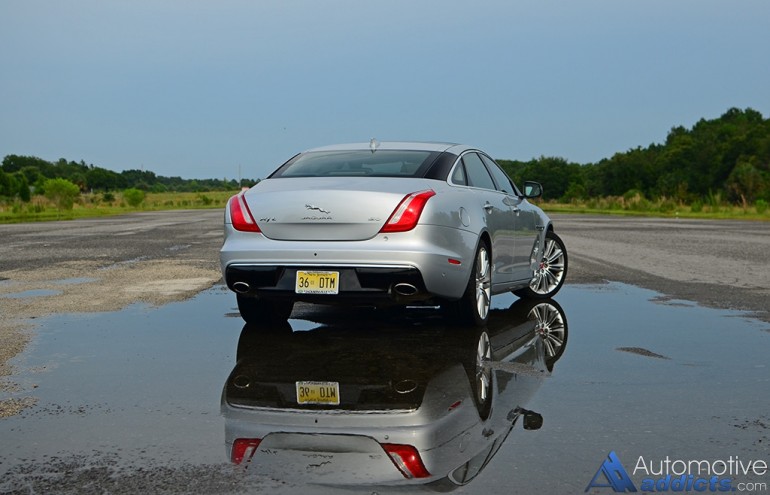 Fuel economy for the 2016 Jaguar XJL Supercharged V8 remained mostly consistent during my week long escapade of making several commuting trips to another office and a limited amount of highway travels. I saw a steady overall average of about 17.4 mpg for the entire week. EPA estimates for the 2016 Jaguar XJL Supercharged fall right along with my figure, getting 15 mpg city and 23 mpg highway. I will say, the XJL Supercharged gets rather thirsty when you push it hard – at times I saw my worst figure of about 14.2 mpg. That wasn’t much affected by the startling engine start/stop system that proves to be jarring when it activated on what appeared to be an aggressive mission in stop-and-go traffic. The system was probably the most un-luxury-like part of the new Jaguar XJL, prompting unsuspecting passengers asking if there is something wrong with the vehicle. 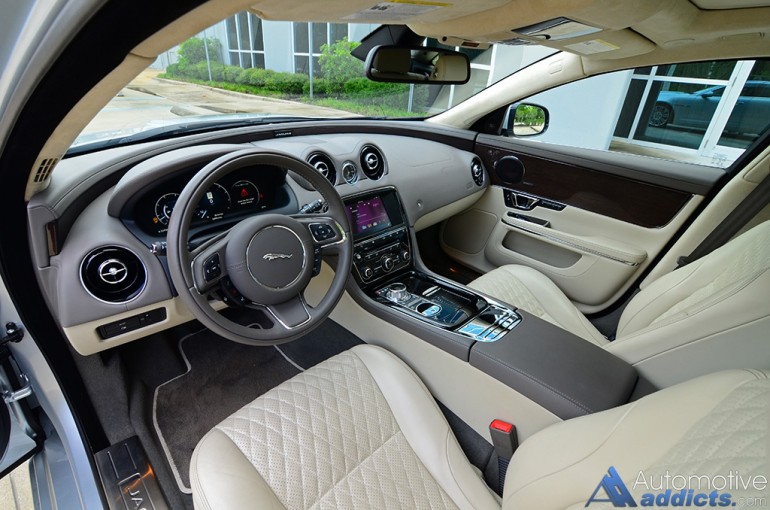 Jaguar attempts to pull out several stops for its luxury-laced appointments in the cabin. Just about every surface, with the exception of the metals and wood trim, is wrapped in leather. The carefully sculpting of its dashboard flowing in circumvented fashion over the front air vents reminiscent of jet engines add to the unique character of the XJL. There isn’t much mistaking the Jaguar XJL for anything else inside and out as it divulges its singular purpose of providing a lavish and spacious seating area for up to five adults. Up front in the Jaguar XJL Supercharged, as part of its long wheelbase Supercharged trim level, the quilted and perforated leather seats have ventilation and heating, as well as a massage feature. The exquisite details throughout the cabin, and beautiful stitching of the plentiful leather-wrapped surfaces all coincide with a simple yet plush theme emanate nothing but luxury. Interior room is generous, and the seating positions, highly adjustable through the 14-way power front seats, are inviting. Opening up the power trunk lid accessed over 15 cubic feet of storage. Out back, the ventilated and heated outboard seats each has power sunshades for the door windows with a rear window power shade and dual climate controls. To fit the motif of a long-wheelbase variation of a luxury cruiser, the XJL can be optioned with Premium Rear Seat Package that adds a massage function, fold-out tray tables, power seat adjustments, and a dual 10.2-inch LCD entertainment screens. 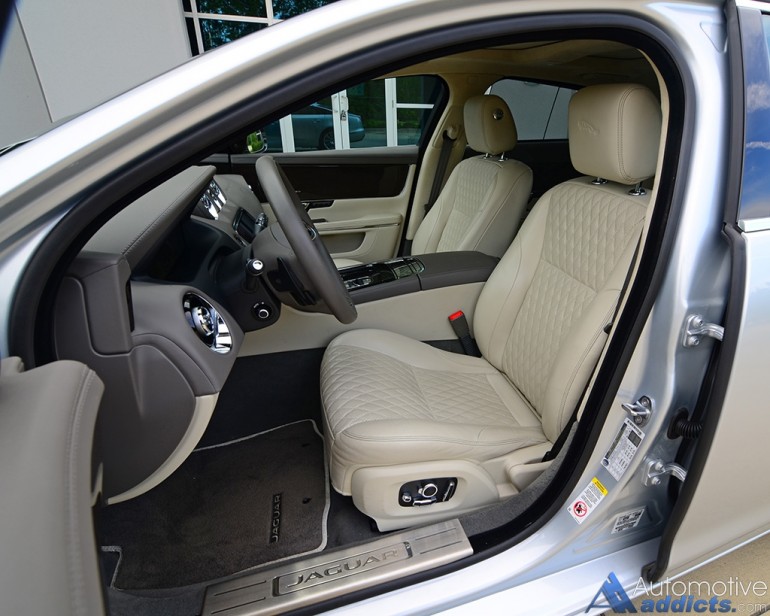 The contemporary design and implementation of Jaguar’s latest feature sets and infotainment system continue to be a mixed bag. While most of the instrumentation is clear and concise to most, the infotainment system remains to be a disappointment where it looks as if the recent update didn’t deliver fully. It’s like using Microsoft Paint to edit and apply a photo filter to your Instagram photos, there’s a lot lost in translation here. While the older infotainment system had its bad marks for an antiquated feel, the newer unit only applies a few additional colors to the full scope of a system hindered by remaining several years behind its competition. The functionality is there for the most part to make essential function inputs for controlling the excellent-sounding optional 20-speaker 825-watt Meridian audio system, Bluetooth phone integration, climate system, and a GPS navigation unit that doesn’t allow destination entry through voice control. Moreover, the smallish volume knob is difficult to grab with it being inset too far into the dash. While I would somewhat omit these shortcomings in a sports car, the Jaguar XJL is something that deserves the proper chops in the area of its infotainment system for its luxury duties. The updated digital gauge cluster attempts to take away the pain of the infotainment unit with a full display of the navigation map, which is a nice change from viewing the virtual gauges – so there’s that. 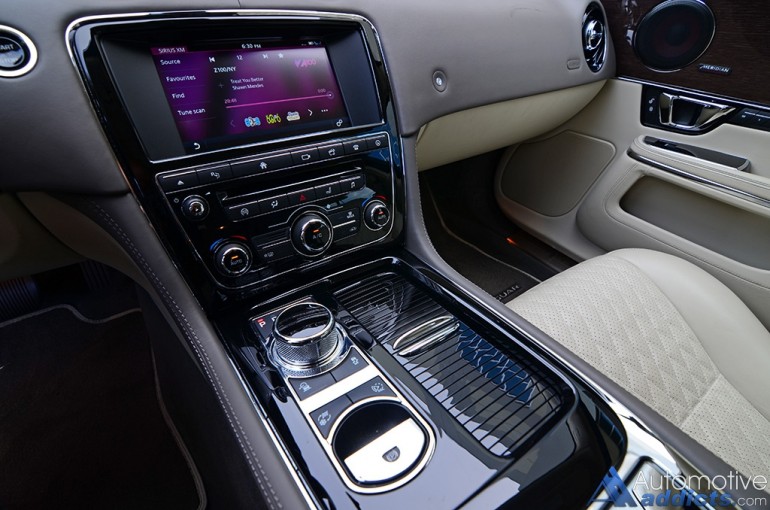 In full disclosure, the time spent with my 2016 Jaguar XJL Supercharged test vehicle I experienced a few infotainment system hiccups that didn’t help my overall perception. The issues were mostly with the backup camera system, which offered a 360-degree view at any speed as part of the optional Parking Assist Package. The system would apparently lockout certain views or not work at all leaving me to utilize the parking sensor display and audible feedback when backing into tight spots or out of parking spots. Though, the cross path traffic detection worked as did the blind spot monitors when driving, which are nearly essential features for piloting such a large vehicle. 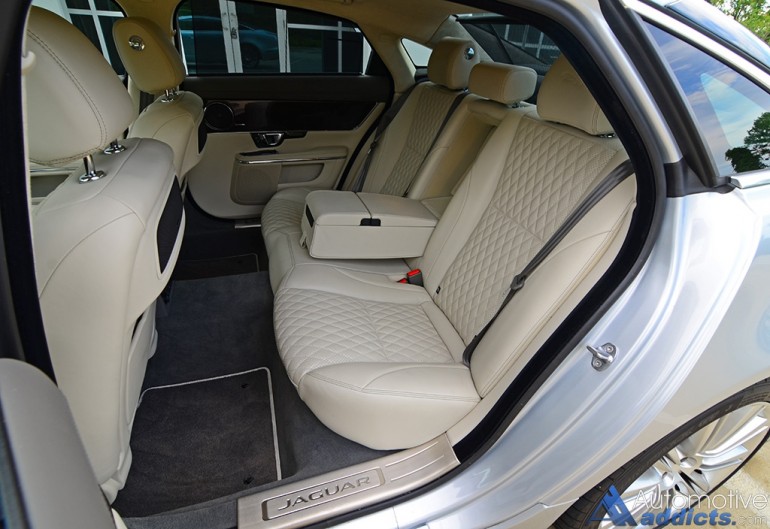 Jaguar’s presence in the luxury world is well established, and that can be reiterated many times over just by the sleek and road-hungry demeanor of the newly refreshed 2016 XJL. Featuring its updated looks with the daring eyes of the new face of Jaguar in its updated LED headlights and daytime running lights, the XJL is deserving of its admission price starting at $95,000 for the Supercharged V8 long-wheelbase variant. My nicely-optioned 2016 Jaguar XJL Supercharged settled on an as-tested price of $102,713 including a $995 destination charge, right on target for the coveted segment that Jaguar has decidedly retained enjoyment in driving.

>> Get the best price on the Jaguar XJL from a network of local dealers now. <<