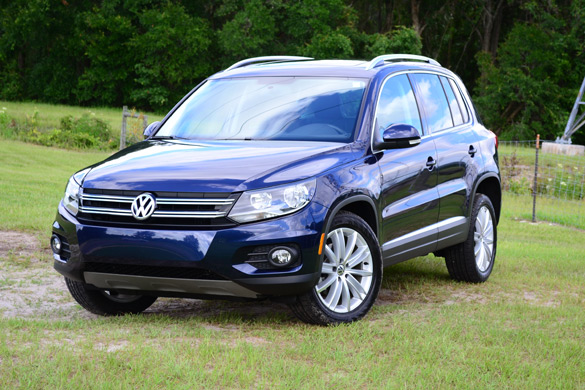 The new 2012 Volkswagen Tiguan, refreshed for this year, embarks on a journey to find its place in a growing compact SUV segment. With many contenders in the game, the new VW Tiguan proves to be a worthy competitor with an excellent engine and an inward perception of value.

When it comes to practicality, some SUVs fall short in an effort to satisfy the hunger for other aspects of a sporty wagon. Practicality can easily become an oversight when an SUV serves up dishes best served on an open highway platter without saving room for desert. In a way, the VW Tiguan makes a compromise in cargo space but opens up an infinite amount of headroom and uncommon segment features in its place. Tall people, such as myself, will have no qualms about a lack of space in the new Tiguan. However, when toting around your luggage or other cargo, you may give a second thought to taking the Tiguan on long hauls. 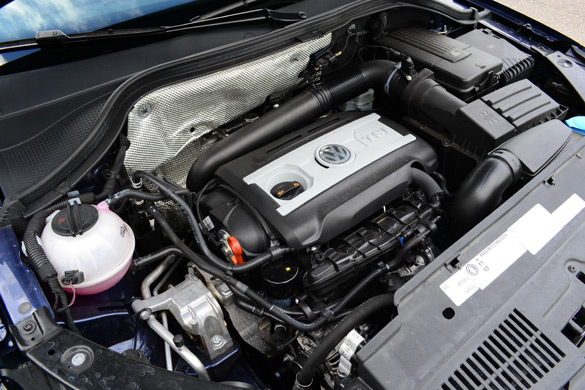 Powered by a favorite of mine, also found in the sporty VW GTI, is the 200 horsepower and 207 pound-feet of torque 2.0-liter 4-cylinder turbo engine. This engine is perfectly matched for the new Tiguan eagerly serving the duty of scooting the 3,400 pound compact SUV around without much drama. With the engine mated to a standard 6-speed manual transmission, it gives enthusiasts a bow, while a 6-speed automatic transmission, optional on S trim and standard on SE and SEL trims, directs power to the front wheels or all four via VW’s optional 4motion all-wheel-drive system. 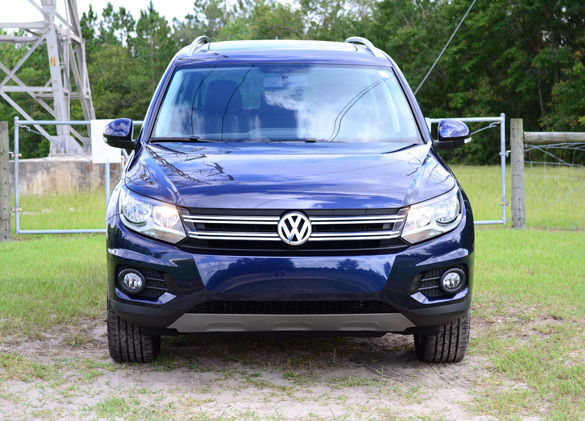 The new 2012 VW Tiguan receives an exterior style refreshing in addition to new options for the top-of-the-line SEL model, such as Xenon headlights, LED daytime running lights and sporty 19-inch alloy wheels. Additionally, the 2012 Tiguan receives automatic transmission tweaking, which I found annoying, to ultimately increase fuel economy. A new LE trim was also added to the line for a total of 4 trim levels, S, LE, SE and SEL. My new 2012 VW Tiguan SE front-wheel-drive trim with sunroof and navigation falls around the middle of the trim scale. 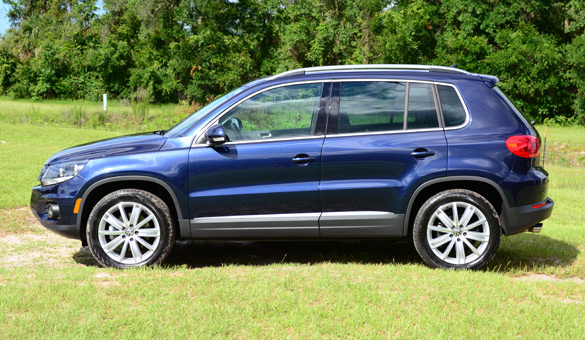 With the state of today’s economic conditions and the price of gas, you really cannot expect a compact SUV to sell well if it does not get good gas mileage. With that said, VW has boosted fuel economy figures by 2mpg in the all-new 2012 Tiguan. Thanks to a remapping of the transmission’s shifting points, the new Tiguan is able to get 22mpg city and 27mpg highway in the front wheel drive automatic transmission setup. Propelling all four wheels through the 4motion all-wheel-drive system, the Tiguan 4Motion (available on S, SE or SEL trim levels) get 21mpg city and a comparable 27mpg highway.

Although some competitors have touted better mpg numbers, the new Tiguan is still a move in the right directly having better fuel efficiency than last year’s model. To achieve the better fuel consumption figures, the 6-speed automatic transmission received reprogramming that tends to shift into a higher gear much earlier, sometimes a bit too early in my opinion. By shifting early under light loads, the RPMs sometimes drop to an unreasonable level causing unwanted drivetrain vibrations. The annoyance is extremely noticeable. It is almost as if you are driving a manual transmission and decided to accelerate at full throttle from 30 mph while in 5th or 6th gear. Thankfully, you can simply put the transmission into the more responsive sport mode to alleviate this issue, but it may cost you a bit extra at the pump due to the computer keeping the lower gear more frequently. The transmission’s sport mode does tend to be the cure-all when driving the new Tiguan in the city. It virtually eliminates the transmission consistent tendency to down-shift at the slightest bit of acceleration. 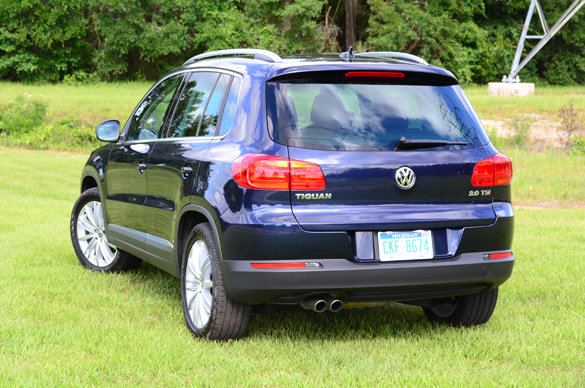 In acceleration test, the new 2012 Tiguan managed to 0-60mpg run in 7.8 seconds and held a modest 0.80g on the skidpad. Ride comfort is good for a small SUV where the Tiguan softly dampens bumps, and gives the driver a confident and stable ride on the highway. During acceleration out of turns, my front-wheel-drive Tiguan managed to consistently break the inside wheel loose. Traction control only intervened a couple seconds after the fact of laying down a short pad of rubber from the single inside front wheel. Surprisingly, torque steer was not an issue, possibly because one front wheel would spin before it had a chance to actually grip the pavement under heavy acceleration. Although we probably won’t see it offered, a limited slip diff would do wonders for the new Tiguan. 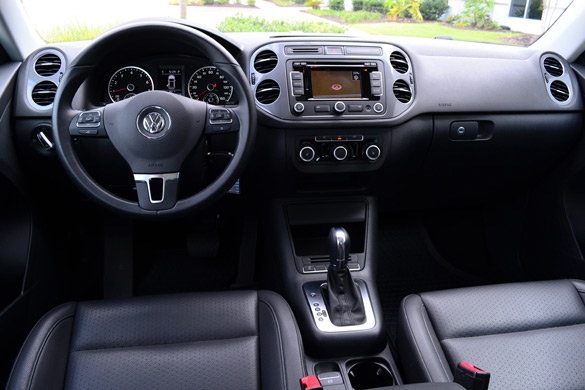 The new 2012 VW Tiguan’s interior remains unchanged from last year. The dashboard boasts a premium style from the soft-touch materials and leather-wrapped steering wheel (standard on LE, SE and SEL trims) to the metal trim pieces and touch-screen navigation/audio system. The leatherette vinyl seats are well-proportioned and somewhat perforated, but can be a bit harsh during hot summer days or cold winters. Stepping up to the Tiguan SEL trim will add softer and more agreeable leather upholstery. Perhaps VW could offer a cloth seating option, which would be the more delightful choice for the lower trims instead of sticky vinyl.

The seating position of the new 2012 Tiguan is well suited for tall or short adults. Considering the Tiguan has a high roofline, over 39-inches of headroom, tall drivers will feel right at home just like I did. A standard tilt and telescoping steering wheel and a manual height adjustable driver’s seat adds even more versatility to the seating position. 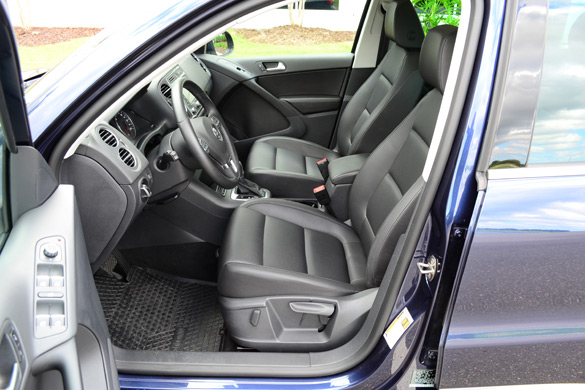 The 60/40 split-folding rear seat has a cargo pass-through in the middle, in addition to being able to recline and slide fore and aft. The rear-seat reclining and sliding features are not commonly found on compact SUVs, conceivably making up for the shortage of cargo behind the seats. In all, the new 2012 Tiguan is able to comfortably seat 5 adults, but without much extra cargo space to spare. 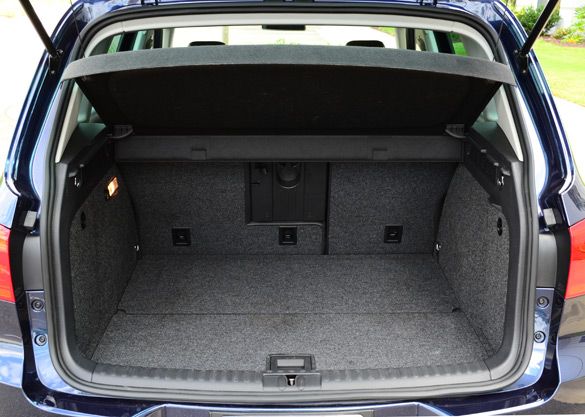 Coming comfortably equipped, my Tiguan SE front-wheel drive trim with navigation and sunroof, included a touch-screen navigation/audio system proving to be user-friendly through simplistic menus and redundant controls. Also included, was a large tilt and sliding panoramic sunroof with a power mesh-like sunshade. Other notable standard features, as part of the SE trim, include cruise control, Bluetooth phone connectivity and streaming audio, satellite radio, partial power driver’s seat (powered seat-back & lumbar), iPod cable, heated front seats, heated windshield washer nozzles and reclining/sliding rear 60/40 split-folding seats. Pricing for the new Tiguan easily reaches north of $30,000 as does my SE trim test vehicle with an as-tested price of $31,345 including $820 destination charge. A base 2012 VW Tiguan S FWD starts at just $22,840 while the SEL 4Motion trim could reach upwards of $36,000. Paying over 35 grand for a compact SUV can be a hard pill to swallow. However, the Tiguan does have a slight edge on premium offerings in a small package not available on its direct competition.