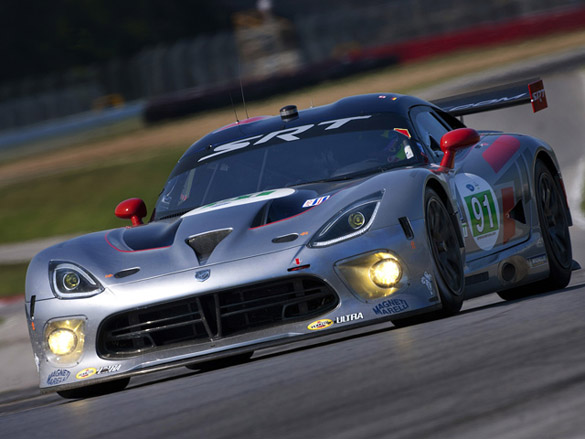 SRT brand CEO and President, Ralph Gilles, was on hand with the SRT team at the Mid-Ohio ALMS race to support Kuno Wittmer and Dominik Farnbacher piloting the number 91 Forza Motorsports Viper GTS-R to finish 10th place. A second Viper GTS-R, sponsored by Pennzoil Ultra, placed 12th. Both cars ‘performed flawlessly’ as Wittmer put it in the exclusive video below.

Gary Johnson, SRT Motorsports Road Racing Manager said, “Our first goal was to get through the race without any major problems. We accomplished that. In fact, we were making progress throughout the race. The cars were getting better. Today’s race gives us an opportunity to know where the issues are and where we need to focus.”

Racing fans will take pleasure in the Viper returning to ALMS and plainly feeling at home amongst other high-performance race-breed vehicles. SRT Motorsports and Team Viper will now prepare for the upcoming 4 hour Road America race in Wisconsin on August 19th. We all look forward to hearing that distinctive 8.4-liter V10 engine slithering around the track in ALMS races to come.