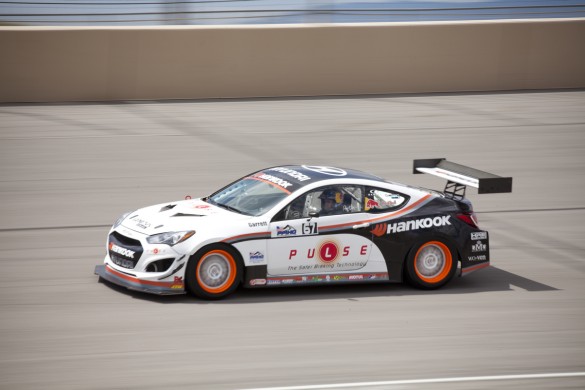 Now that the the 2012 Pikes Peak International Hill Climb has been run, the mountain has crowned a new champion and, as expected, a new record time. Rhys Millen, driving a specially prepared Hyundai Genesis Coupe, ran the course from start to finish in 9:46.164, breaking Nobuhiro ‘Monster’ Tajima’s previous record by some five seconds.

Fans of the race will be quick to point out that Millen’s record was achieved on a completely paved course, while Tajima achieved his on a mix of asphalt and dirt. As Motor Authority reports, Tajima didn’t even complete this year’s run in his electric-powered Monster Sport E-Runner, as a mechanical or electrical issue sidelined him mid-run.

Millen ran the even in the same car he campaigns in Formula Drift, though it was set up differently for his run up the mountain. The rear-drive coupe was developed jointly between Hyundai and Rhys Millen Racing, and is said to make around 700 horsepower and 700 pound feet of torque from its V-6 engine.

Don’t think that Millen had an easy go of it, either. Rain and snow flurries made traction hard to find, and the organizers were eventually forced to move the finish line below the summit as conditions worsened.

While it’s still nearly a year away, teams are already planning for next year’s event. Tajima will be back to reclaim his crown, and we expect to see even more competitors running (even faster) electric cars.