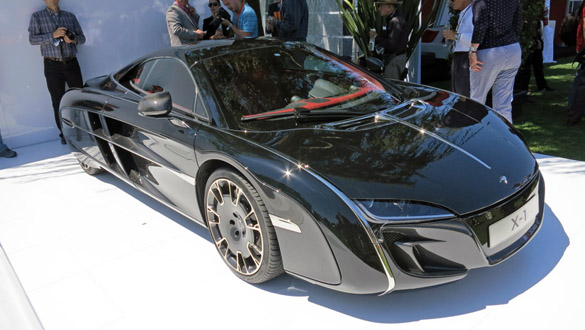 McLaren’s Special Operations program (MSO) brought a one-off X-1 Concept, reportedly built for an Arab MP4-12C, McLaren F1 and Mercedes SLR owner, to the 2012 Pebble Beach Concours d’Elegance. The McLaren X-1 Concept is a creation that came to full fruition after a total of 2 and half years of work, well before the MP4-12C was officially launched. The X-1 Concept’s body is constructed from carbon fiber. Other construction bits include nickel-finished solid aluminum bits while reserving the MP4-12C’s mid-engine, rear drive platform.

The McLaren X-1’s estimated valued is around an astonishing $7 million. McLaren claims to have the capacity to work on such a vehicle, as many as two projects at one time. There is no doubt that this is a distinctive vehicle, which more than likely sparked many interesting conversations on the Quail Lodge at the 2012 Pebble Beach Concours d’Elegance.