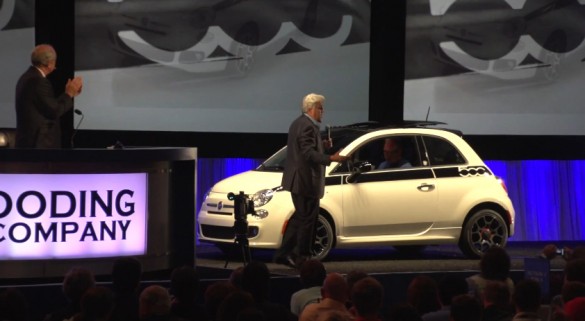 Last weekend’s Gooding & Company Auction at the Pebble Beach Concours d’Elegance saw all kinds of exotic and collector cars cross the block. None, however, was more important than a 2012 Fiat 500 Prima Edizione donated by comedian and uber-car-guy Jay Leno.

While the Fiat’s low serial number and second-in-the-country delivery status add to its collectibility, its the charity supported by Leno that was the big draw. Proceeds from the sale of the car went to Fisher House, an organization that houses families of wounded soldiers during the often-long recovery process.

Guests at the auction included Leno, Secretary of Defense Leon Panetta and Army Chief of Staff Ray Odiero. Bidding opened at $50,000, but immediately jumped into the six-figure range. Perhaps more significantly, donations for Fisher House began pouring in to the auction; when the hammer dropped, the car sold at $350,000, but a total of $600,000 was raised for the charity.