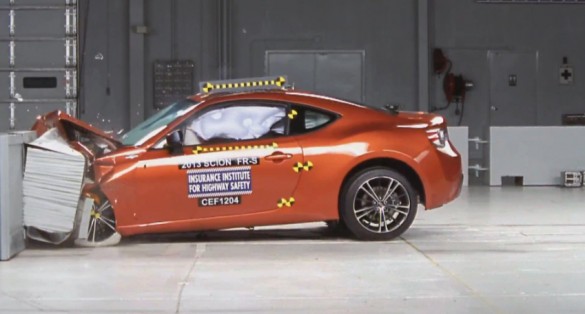 If you think that small, lightweight sports cars can’t be safe, think again: the Insurance Institute for Highway Safety (IIHS) has given both the Scion FR-S and its fraternal twin, the Subaru BRZ, a Top Safety Pick award. Earned by achieving high marks in frontal offset crash, side impact, rear impact and roof strength testing, a Top Safety Pick award recognizes automaker achievements in safety engineering. It also helps automakers sell cars, since safety has become a primary shopping point for many new car buyers.

Also earning Top Safety Pick status in the latest round of testing were the Honda Civic-based 2013 Acura ILX sedan and the 2013 Ford Escape crossover, which did significantly better in roof strength testing than its predecessor.

If you’ve ever wondered what it would look like to drive a Scion FR-S into a barrier at 40 miles per hour, or how your head would fare in a 30 mph side impact, wonder no more. Thanks to the IIHS, we’ve got the footage from its crash testing schedule, and it’s enough to convince us that even safe cars are dangerous to stack. We don’t recommend you try this at home, either.