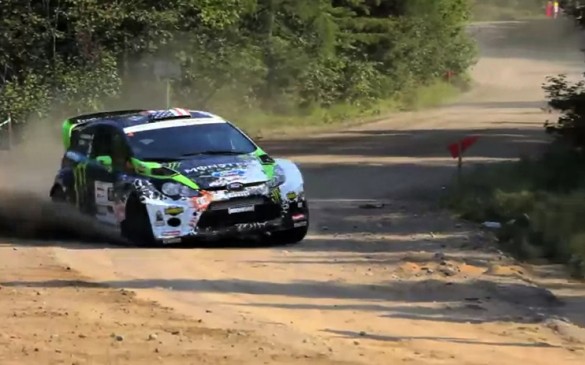 Ken Block hasn’t exactly dominated in World Rally Championship competition, but we’re willing to give him the benefit of the doubt. After all, how many other WRC drivers have to run a shoe and clothing empire, come up with ever-more-insane Gymkhana videos and perform regularly at events like the X-Games before thousands of adoring fans?

Mr. Block and his co-driver, Alex Gelsomino, still know a thing or two about going stupid-fast on surfaces that would have most of us sticking to third gears and early-apexing corners. Recently the pair competed in the Canadian Rally Championship’s Rallye Defi for the first time since 2009, taking top honors by a margin of three minutes and twenty seconds. Critics are quick to point out that Block and Gelsomino were driving a WRC-Prepared Ford Fiesta, built with little regard to details like budget or expenses. We’d counter by saying that every series has rules on modifications and horsepower, so Block and Gelsomino must have been within those rules in order to compete.

Whether you’re a Block fan or not, the driving in the this two-and-a-half minute video is impressive, and it makes one wonder just how much better you need to be to win at the top levels of the sport, in WRC. We love our track days, but sliding a car sideways on gravel at triple-digit speeds towards a group of spectators isn’t our idea of a good time.