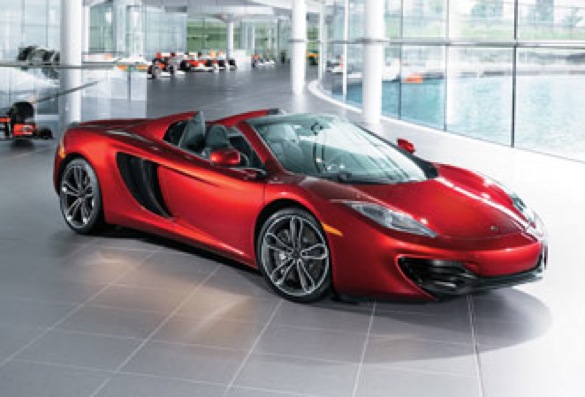 Each year, high-end retailer Nieman Marcus publishes a list of fantasy gifts, aimed exclusively at one-percenters who embrace extravagance or convenience over value. The “Fantasy Gift” list generally includes a car, marked up to near-absurd levels and distinguished by custom paint and a few unique accessories. On the plus side, buying through Nieman Marcus generally gives the ultra-wealthy a chance to be the very first on their block with a new-and-otherwise-unattainable set of wheels.

This year is no different, as Nieman Marcus is offering shoppers the chance to buy a McLaren MP4-12C Spider, sprayed in Volcano Red and equipped with a set of McLaren fitted luggage. Buyers also get a business-class trip to the U.K., a tour of the McLaren Technology Center and a private dinner with McLaren’s chairman, Ron Dennis. The price for all this holiday cheer? A mere $354,000, which sounds like around $100,000 more than the cost of an equivalent MP4-12C Spider, delivered later in the production cycle.

To be clear, it’s not all about profit for Nieman Marcus. For each McLaren sold, the retailer will donate $3,000 to Big Brothers Big Sisters, and you’re not likely to get a meeting with Ron Dennis just by putting money down on a 12C Spider. For those with a large enough bank account, this could represent the holiday gift of a lifetime.