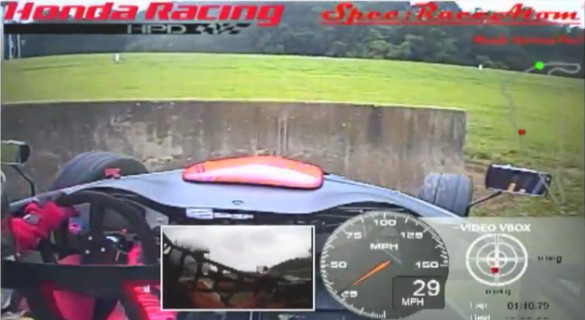 Just before the moment of impact

There are certain unwritten rules in motorsports that have existed since two guys in horseless carriages decided to have a go to see which one was faster. Prior to a race, for example, you’ll do whatever it takes to help your competitors, including the loaning of tools, parts, donuts and coffee. During a race, you don’t pass until you see the green flag wave, and you never pass under a yellow flag. While you should always do what you can to save your race car, rule number one is that you never stack a borrowed race car.

As Autoblog explains, this video was captured during practice for an Ariel Atom spec race at Virginia International Raceway’s North Course. We’d be the first to tell you that VIR is a challenging track to learn, made more difficult by traction-robbing elevation changes. The good news is that there’s plenty of run-off area, meaning that mistakes generally aren’t as costly as they’d be at a track like Road Atlanta.

We say generally, since there’s an exception to every rule. We can’t say for sure what happened to the driver in this video, but it appears as if he lost traction when the car unweighted after cresting a hill. His steering wheel was going in the proper direction, but the front tires failed to get that particular memo. Judging from the skid marks in the corner, more than one driver made this same mistake.

Though it looks like the driver had plenty of time to collect the car, racing tires don’t offer up much grip on grass, and race cars are mysteriously drawn to concrete barriers. We’re not sure how much damage the Atom sustained, but the driver walked away unhurt, except for his pride. On the other hand. since it was his brother’s car, holiday gatherings will likely be a bit awkward for the next few years.