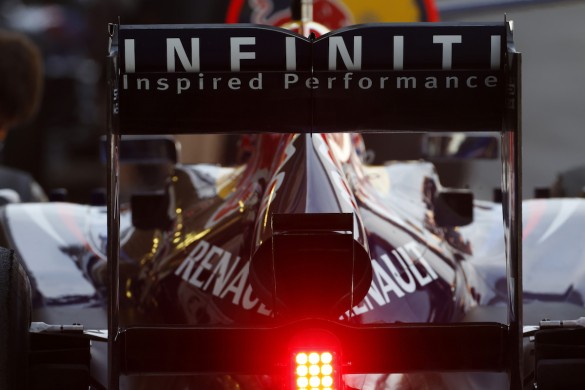 Infiniti will be even more prominent on the Red Bull cars in 2013 – image: Infiniti

On the same day that Red Bull Racing earned its third consecutive Formula One Constructor’s Championship (and driver Sebastian Vettel took home his third Driver’s Championship), Infiniti has announced it will become a title sponsor and major technical partner beginning in 2013. The team will now be named Infiniti Red Bull Racing, with drivers Sebastian Vettel and Mark Webber returning for the 2013 season.

The move strengthens the relationship between Infiniti and Red Bull Racing, begun in 2011. Backed by Nissan, Infiniti will help Red Bull Racing develop required Energy Recovery Systems, mandated by the competition rules for the 2014 season. In exchange for its engineering support (and, we presume, a bigger bundle of sponsorship dollars), Infiniti will get greater exposure, especially in the all-important Chinese market.

Don’t expect a switch to Infiniti (or Nissan) engines any time soon, though, since developing a competitive F1 engine generally takes years of effort. Engine supplier Renault is already allied with Nissan globally via a 13-year-old strategic partnership, so there would be little benefit to making changes in this area.

Look for Infiniti Red Bull Racing to debut its RB9 chassis in February of 2013, with the first race of the 2013 F1 season, the Australian Grand Prix, scheduled for March 17.