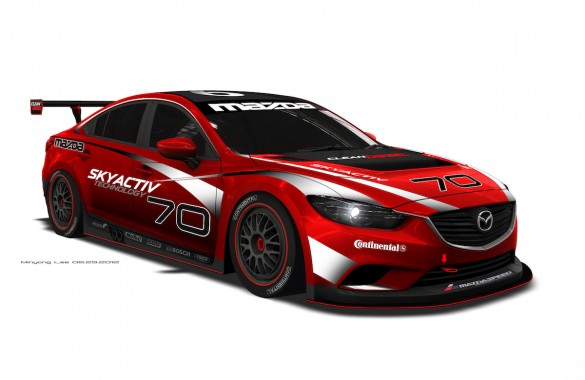 Mazda’s new Mazda6 sedan will begin hitting dealers in early 2013. While the styling update and new Skyactiv four-cylinder engine would be news enough, the Japanese automaker announced yesterday that it would be bringing the Skyactiv diesel variant of the car to these shores in the second half of 2013 as well. That makes Mazda the first Asian manufacturer to import a non-commercial, clean-diesel vehicle into the United States.

Mazda is still finalizing the Skyactiv-D engine with the EPA, so output figures aren’t yet available. In traditional Mazda form, however, the manufacturer will look to prove the car in competition, even before it’s available to consumers.The Mazda6 Skyactiv-D will make its racing debut in the Grand-Am GX class at January’s Rolex 24 endurance race in Daytona Beach, Florida.

Mazda has worked with SpeedSource to develop the car, and the diesel engine has already met the team’s goals for performance (over 400 horsepower) and durability (over 50 hours), while using a surprising percentage of production Mazda components. Even the block of the 2.2-liter engine started life as a stock piece.

The Mazda6 diesel represents the first-ever diesel racer in the Grand-Am series (though they’ve been raced for years by Audi and Peugeot in the rival American Le Mans Series), and Mazda hopes the car will earn the company’s 24th class win at the Rolex 24 race.