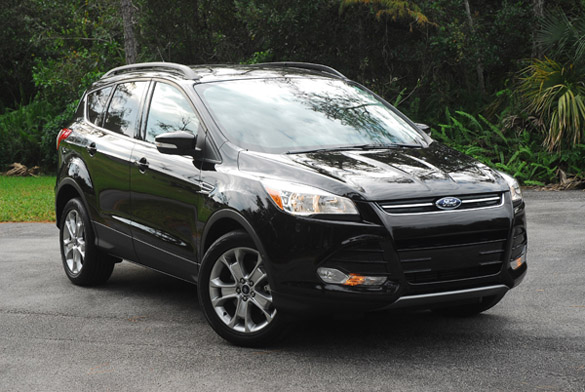 The all-new 2013 Ford Escape sport utility vehicle not only features cutting edge sleek design and new segment-busting technologies, it also features a powerful 2.0 liter GTDI EcoBoost I-4 engine, smooth shifting six-speed automatic, fully independent suspension, modern and upscale interior, a slew of standard safety features plus fuel economy topping any vehicle in its class.  Versatile vehicle features new hands-free technology-including a power liftgate with motion technology similar to video games’ and an upgraded MyFord Touch system that makes connecting with digital devices on the go even easier.  The all-new Escape offers three engines, which provide efficiency with sacrificing power.  I tested the powerful 2.0 liter gasoline direct injected turbo EcoBoost I-4 engine.  The Ford Escape, America’s best-selling SUV, raises the bar even higher with the all-new model that includes 11 new exclusive features and fuel economy projected to top any vehicle of its kind on the market today.  Sixty percent of Americans shopping for a vehicle this year will look at either a midsize sedan or small SUV, making Escape part of one of the most cross-shopped and fastest-growing segment in the auto industry. 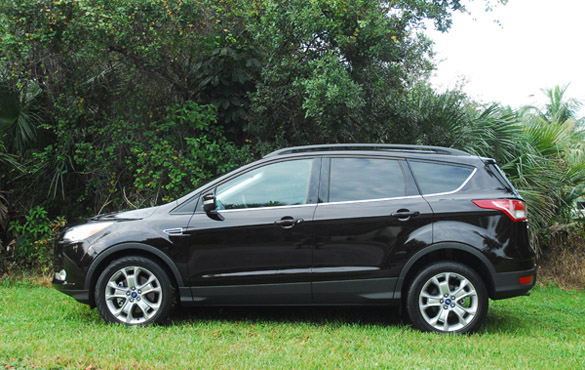 An array of new clever technologies adds to the new Escape’s versatility, helping make life easier for its owners.  They include an available hands-free power liftgate that brings new technology to the SUV market and is enabled by motion technology used in today’s video game systems.  A gentle kicking motion under the center of the rear bumper activates, unlocks and raises the liftgate when the driver has the Escape key fob.  This allows quick and easy access to the cargo area without needing to set down packages or dig out keys.  The same process closes the hatch; SYNC with MyFord Touch offers multiple ways for customers to manage and control information through voice commands, menus accessed through controls on the steering wheel, touch screens, buttons or knobs.

Upgraded system includes a new look, marking phone, navigation, entertainment and climate controls even easier to use; parallel parking the Escape virtually stress-free with active park assist.  With the press of a button, the system detects an available parallel parking space and automatically steers the vehicle into the space.  Drivers control only the gas and brake pedals; maneuvering parking lots and traveling open roadways becomes even safer and less stressful with Escape’s sensor-based BLIS (Blind Sport Information System) with cross-traffic alert.  BLIS sounds an alert when a vehicle is detected entering a blind spot.  Cross-traffic alert warns if traffic is detected approaching from the sides, such as when Escape is leaving a parking space in reverse; the all-new Ford Escape is the first Ford SUV to combine class-exclusive technology to automatically slow the vehicle when it’s cornering too fast (Curve Control) or help accelerate through a turn (Torque Vectoring Control) a new intelligent 4WD system helps deliver outstanding handling on pristine pavement and in adverse conditions as well, along with excellent traction off-road.  Using advanced software and sensors, the new intelligent 4WD system analyzes date from 25 external signals, including wheel speed, accelerator pedal position and steering wheel angle, assessing road conditions and driver input 20 times faster than the blink of an eye.  The system uses all the sensor inputs to turn the vehicle in the direction that you want it to go.  Intelligent 4WD builds on the pre-emptive actions by adding and subtracting torque as needed through an electromagnetic clutch.  The 4WD system seeks to correct understeer and oversteer more quickly and improves traction and handling.  The 4WD system, when engaged, works seamlessly with no driver input needed. 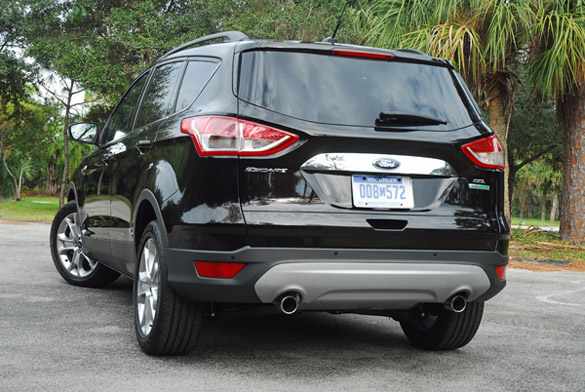 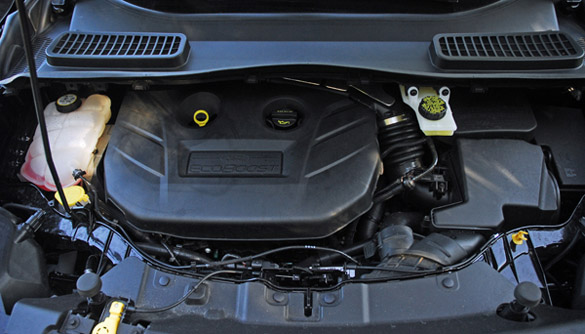 In Escape, EcoBoost engines are mated to a specially calibrated six-speed SelectShift automatic transmission turning the front wheels or the optional 4WD.  This standard gearbox allows drivers who want more hands-on experience to manually control gear selection from a switch on the left-hand of the shifter.  Not the best place to put it but the drive in automatic is so smooth and powerful that I never used it.  This new gearbox features a new torque converter for improved driving feel, silky smooth shifts and even better fuel economy.  Engineers also installed revised gear ratios for a balanced driving feel in all situations.  The standard engine is the updated 2.5 liter with 168 hp and 170 lb.ft. of torque giving the new Escape a comprehensive lineup of four-cylinder engines.  It also is matched to a six-speed SelectShift automatic transmission.

Also aiding fuel economy is Escape’s sleeker design.  The new model is nearly 10% more aerodynamic than before, plus the new Escape’s active grille shutter system, which is on all models with the 1.6 liter and 2.5 liter EcoBoost engines, reduces wind resistance.  Grille slats stay open when extra engine cooling air is required, such as low-speed stop-and-go driving.  When cruising on the highway at steady speeds, the grille slats automatically close to improve aerodynamics and fuel efficiency. 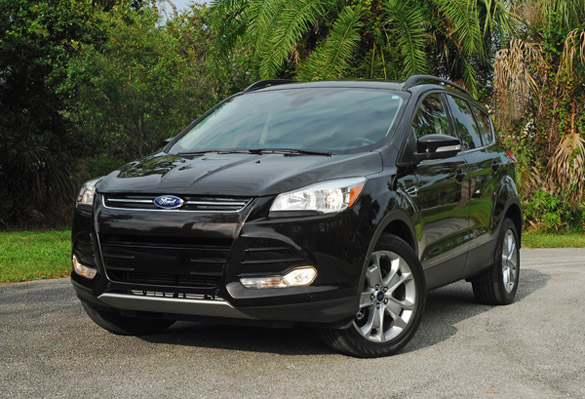 Like an athlete poised in the starting blocks, Ford’s all-new Escape is set to spring beyond previous ideas of what an SUV looks like to create a sleek utility vehicle, visually communicating improved efficiency in fuel consumption and cargo storage.  Up front the characteristic trapezoidal grille is divided into three sections, creating a bold new face of Ford.  Strong cat’s-eye lamp clusters and lower foglamps light up the night. The slim upper grille opening emphasizes Escape’s wide stance.  The three dimensional hood focuses on and the highlights the Ford oval.  Strong shoulders forms, pronounced wheel arches and a rising beltline with a hockey stick chrome strip combine to define Escape’s muscularity.  The fast windshield angle and design lines emphasize a sleek, lean and athletic feel.  The new dynamic roofline defines the new innovative, efficient silhouette including the deep side extensions that give the truck a hunkered down look.  The rear fascia features wrap-around lamp clusters, a spoiler on top of the wide and high-opening liftgate, step-out bumper and dual exhaust tips with polished stainless steel finishers.  Filling the flared fenders are big 18X7.5 in. cast aluminum wheels wrapped with Continental P235/50R18 in. Conti-Pro Contac tires for enhanced traction and a smooth quiet ride.

The independent suspension gives the all-new Escape a smooth and controlled ride on smooth or rough pavement.  Up front is a MacPherson strut setup with a thick 24mm stabilizer bar to keep body lean to a minimum.  The control blade rear suspension features a 18mm stabilizer bar to further keep rear body lean to a minimum when driving on curving roads at speed.  The rack & pinion electric power assisted steering system had a good feel for the road with quick reaction to my steering wheel inputs.  It really gave me the feeling that I was part of the total driving experience.

Quickly and safely slowing the new Escape down from speed are large, power-assisted, four-wheel discs brakes.  Up front are 12.6 in. vented discs clamped with a large single-piston calipers, and 11 in. solid discs clamped with large single-piston calipers in the rear.  Standard ABS, traction control and electronic stability control assures you that you are in control during hard and severe braking situations. 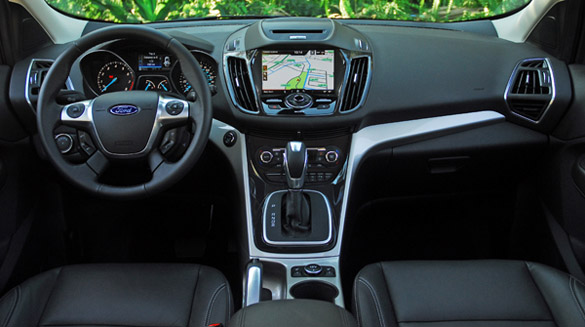 The interior is brand new and very pleasing to the eye and hands.  The doors open wide to let you view a dual cockpit front seating area with leather trimmed seats.  The front buckets are comfortable and very supportive with 10-way power for the driver’s side.  All of the touch points are soft and made of quality materials.  Chrome and aluminum trim are found throughout giving the interior a more luxurious look.  The instrument cluster features a large speedometer and tachometer with small gas on board and engine coolant temperature gauges using blue needles.  All switches, dials and buttons are within easy reach for use and have chrome trim.  The rear seats feature dual vents from the rear of the center console, map pockets behind the front seatbacks, a pull-down armrest with dual cupholders and feature 60/40 split fold-flat seats to enlarge the cargo carrying capacity of the all-new Escape.

The interior is very quiet thanks to Ford’s use of new materials such as expandable foam baffles in the A-B-C and D-pillars and front fenders that help keep out unwanted road and powertrain noise.  Newly designed and developed mass dampers are strategically placed crucial in suspension components to help reduce noise inside the cabin.  Other key chassis component improvements such as stiffer front and rear subframes, plus decreased vibration and harshness that can be heard and felt by the driver.  An additional level of door system sealing around the body-side’s perimeter along with an enhanced design window sealing system help eliminate wind leak.  An extensive sound package treatments used in carpet, dash panel, and interior trim panels reduce transmission of sound into the passenger compartment-resulting in reduced levels of interior noise.  Overall body structure stiffness increases 20% to help reduce interior road-noise levels.  One implementation example includes structural adhesive sandwiched between the layers of the rear quarter panels.  Finally, I had the new panorama Vista sunroof with fabric mesh deflector providing quieter performance with the roof open. 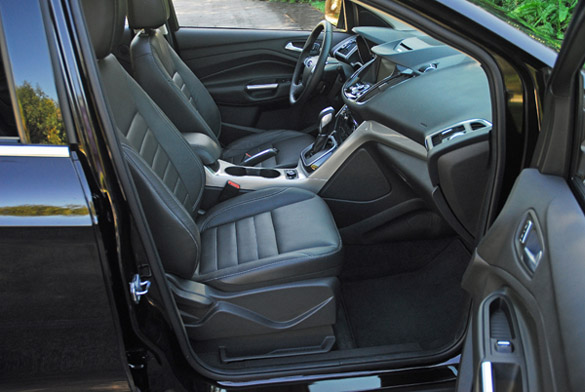 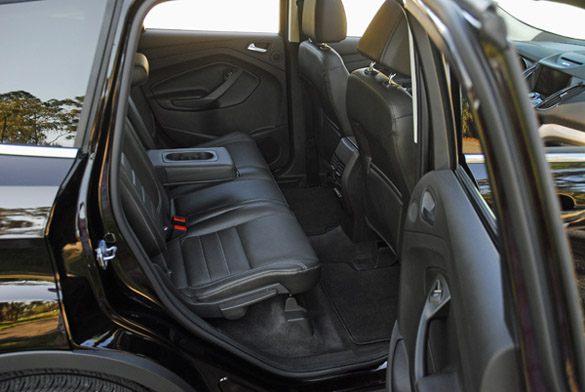 The all-new 2013 Ford Escape SEL FWD SUV is one of the best small sport utility vehicles that you can buy.  It has new razor sharp styling, great versatility for a growing family or active singles or couples, a comfortable and very up-to-date technological interior, fun-to-drive dynamics and very safe.  It gets high marks in all important reasons to choose this as your next small SUV.  Escape the ordinary in the all-new 2013 Ford Escape SUV.