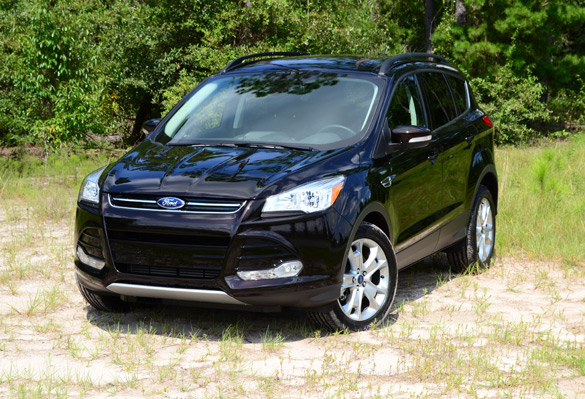 All new for 2013, the Ford Escape gets a complete redesign to slightly imitate the sporty design of the new Ford Focus. Within the crossover segment, the Ford Escape has been a major player providing ample room for 5 passengers, cargo, efficiency and slight utility for those daring enough to get a little rugged. The all-new 2013 Ford Escape takes each aspect of the Escape, first introduced 2001, to improve upon virtually every aspect for the 3rd generation model.

Adopting a complete new design, the new 2013 Ford Escape is hardly recognizable and thought by some to be a larger Ford Focus but zoned in on the compact crossover market. Being that the crossover segment is highly competitive, with offerings from virtually every major auto manufacturer, the new 2013 Ford Escape offers consumers a long list of options, high-quality interior materials, the latest version of Ford’s MyTouch infotainment system and a trio of efficient 4-cylinder powertrains to choose from. 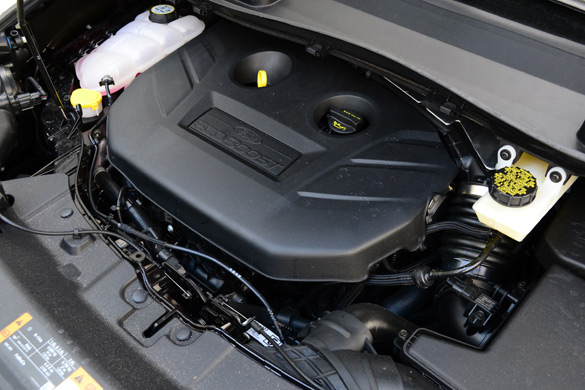 The new 2013 Ford Escape, sharing its platform with the new Ford Focus, is no longer perceived as boxy or the less respected stepsister to the Explorer. The new Escape brings fresh styling and a competitive edge to the game with a 2.8-inch longer wheelbase and a 1.3 inch wider body than the outgoing model. A total of four trim levels grace the new Escape lineup, offering a little something for consumers who may be on the fence about larger or small crossovers. Starting with the S trim, the new 2013 Escape gets a 2.5-liter 4-cylinder engine with 168 horsepower and 170 ft-lbs. of torque. Fuel economy figures for the base model come in around 22 mpg city and 31 mpg highway. Interestingly enough, my test vehicle’s SEL trim, one step from the top-line Titanium trim, gets 22 mpg city and 30 mpg highway from its optional 2.0-liter 4-cylinder turbocharged EcoBoost engine packing 240 horsepower and 270 ft-lbs. of torque. 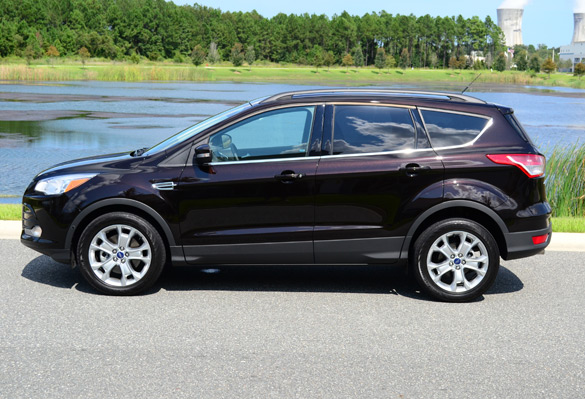 The SE and SEL have the option of the 2.0-liter EcoBoost engine in place of the standard 1.6-liter EcoBoost. For the mid-range, the new Escape SE trim gets a turbocharged EcoBoost 1.6-liter 4-cylinder engine producing 173 horsepower and 184 ft. lbs. of torque as standard equipment yielding an estimated 23 mpg city and 33 mpg highway, which is the best fuel efficiency out of the three engine choices. All engines are mated to a 6-speed automatic transmission. An optional all-wheel-drive system can be had on the SE, SEL or Titanium trim. The base S trim gets 17-inch wheels. The SE and SEL get 18-inchers while the top of the line Titanium trim opts for stylish 19-inch wheels. 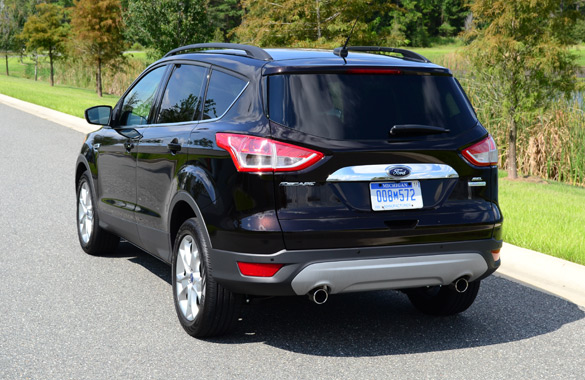 My first driving impressions of the new 2013 Ford Escape are very reminiscent to a midsized sedan in the realm of power and some handling qualities. The new Escape feels light on its wheels at times and proves to be stable at highway speeds. Under hard acceleration, the 2.0-liter EcoBoost engine thrusts an abundance of torque to the front wheels with a little torque steer and modulation of the traction control to keep the front wheels from spinning. The flat torque curve of the EcoBoost engine keeps the new Escape on a level playing field when it comes to throttle management and easy of driving during times that power is immediately demanded. Steering response is somewhat isolated form road feel, although, on twisty roads the Escape is predictable at best. The 6-speed automatic transmission keeps the EcoBoost engine near its sweet spot and never really gets lost hunting for the proper gear. Ride quality is good and somewhat sporty due to the low-sitting body for a crossover vehicle. 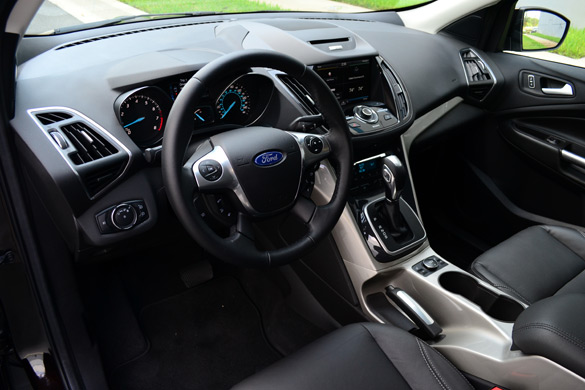 The interior appointments of the new 2013 Ford Escape are quite inviting. The layout is great, and front passengers will notice a higher level of quality in craftsmanship of the materials, even if they are plastics. Several soft touch plastics were used along with a bright instrument cluster and a central MyFord Touch LCD color screen.  For the new Escape, the MyFord Touch system has dedicated push-buttons for the ac and heater controls as well as the audio system. The latest version of MyFord Touch in the new Escape may have received some ‘changes’, but it still tends to suffer from slight glitches and screen hangings. Possibly the biggest downfall of the new 2013 Ford Escape, is its MyFord Touch system’s slow response and inconsistencies. The interface as a whole is well thought out to combine Bluetooth phone integration, climate control settings, audio system controls and GPS navigation. The inconsistencies have even found their way into the operation and viewing of the GPS navigation system’s map. Using a feature like auto zoom seems to take several seconds to load a different zoomed perspective of the map most times. Surprisingly, the system does use an SD card for the mapping software, but still tends to be a little on the slow side. I am not even sure using the SYNC voice system makes things any more responsive, although, SYNC is very clear and concise about your optional voice commands. 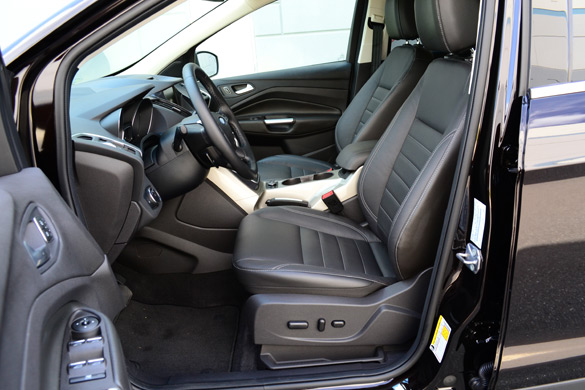 The padded dashboard, physical buttons for controls (instead of touch-sensitive buttons found on other MyFord Touch equipped vehicles) and alterative ac/heater vents, all add to the interior being inviting for front occupents. The heated front leather seats in my new Escape SEL trim are generously padded and have a lot of surface area with decent bolstering support. The rear seating area, with reclining seatbacks, is roomy for a compact crossover. Someone with a 6-foot frame would not have issues finding a comfortable seating position in the rear of the new Escape.

For the new 2013 Ford Escape, a long list of options put it up against luxury crossovers. Even though my 2013 Escape SEL 2.0 EcoBoost FWD was only ‘comfortably’ equipped with just over $6,000 worth of options, a new Escape Titanium AWD can reach nearly $38,000. The base pricing of the new 2013 Escape is very attractive, but with an options list as long as the 105.9-inch wheelbase, the new Escape is no longer such a bargain when loaded up. 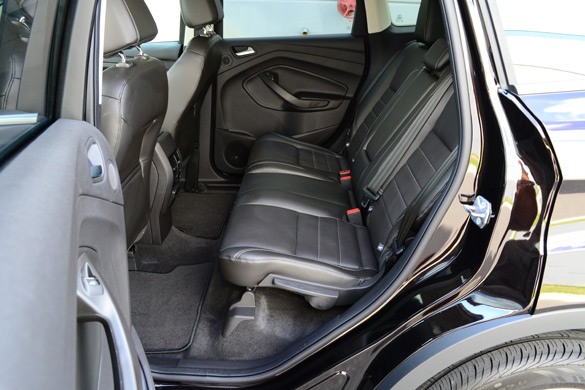 Of course you tend to have the urge for the list of options to include the high-tech features, such as the innovative “hand-free” power liftgate. The new hand-free liftgate allows you to keep your key in your pocket and kick with one foot under the rear bumper to automatically open the rear liftgate. You may have seen this demonstrated on a TV commercial recently. I must say, it works just as advertised, just be sure to back up slightly so the liftgate does not hit you in the face.

Other notable high-tech gadgetry available on the new Ford Escape, is the rear parking aid sensors and backup camera with cross-path detection. The system is excellent for those who have some issues with joining the rear bumper to immovable objects from time to time, in addition to crossing vehicles that you may not see when backing up. Even though the MyFord Touch system has its peculiar qualms, it does provide the driver and passenger with some form of extra connectivity to the vehicle to not only assist the drive with navigating a destination, but also “easily” accessing many vehicle functions. If only the system were a little more responsive. 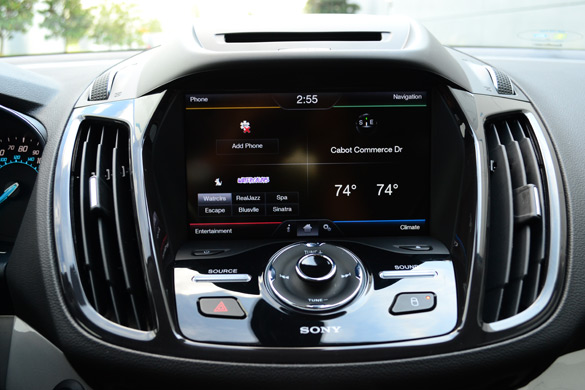 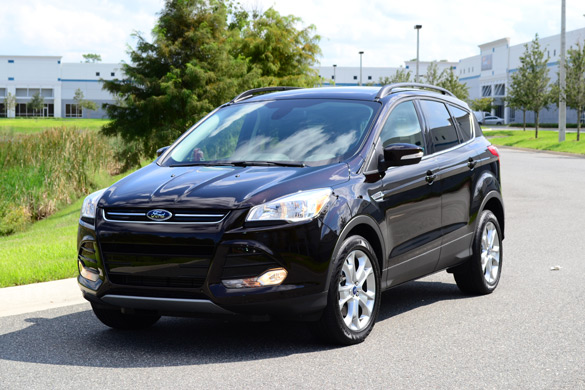 The new 2013 Ford Escape is a reasonable compact crossover with many available configurations and options to appeal to a wide range of buyers. The attractive base prices of all trim levels, with the S trim starting at just $22,470, makes the new 2013 Escape a highly sought-after crossover. The competition remains stiff but after spending a week in the new Escape, I am assured that it will fare well in the years to come with the newest 3rd generation 2013 Ford Escape.