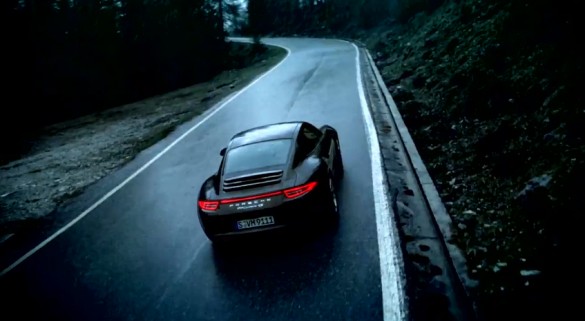 Filming a modern car ad is an incredibly complex task that usually involves a production crew, a specially equipped camera car, permits, road closures and the kind of logistics normally involved with mounting an attack on the north face of Mt. Everest. When you try to capture four seasons in a single six-day shoot, the difficulty level climbs exponentially.

To show off the all-weather prowess of the new Porsche 911 Carrera 4, the German automaker wanted footage of the car in all types of weather conditions, from dry and sun-lit roads through fog, rain and even snow. The shoot involved seven locations, ranging from coastal roads through forests and mountain passes. Since Mother Nature doesn’t always cooperate with filming, artificial “weather” was brought in, and the crew went through nearly 5 million autumn leaves, over 2,600 gallons of rain and nearly 38,000 cubic feet of artificial snow. There was a fog machine, too, as well as a pair of helicopters and a specially-equipped Mercedes M Class camera rig.

The end result is a series of videos showing the new 911 Carrera 4 and Carrera 4S models working their magic across a broader range of conditions than most owners will ever experience. Sure, the all-wheel-drive 911 models are capable of getting you though winter (when fitted with winter tires, of course), but no one in their right mind is going to submit a $100,000 plus car to the harsh realities of a Northeast winter. Besides, that’s exactly why Porsche builds the Cayenne SUV.