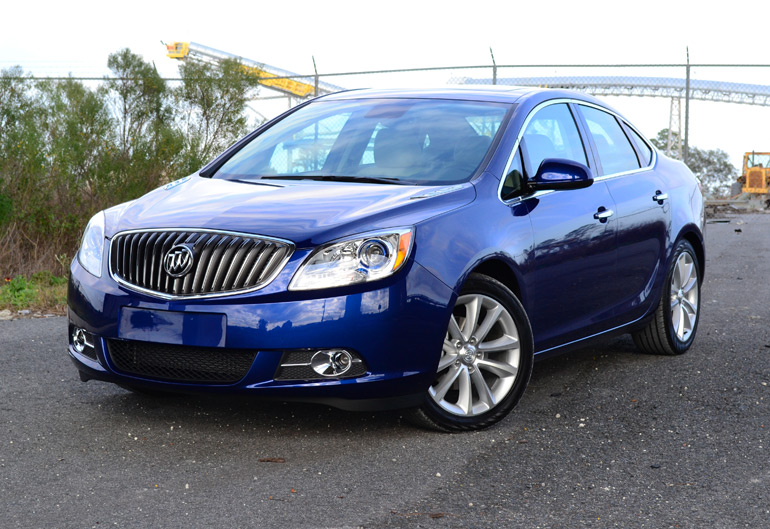 The traditional definitive thought of a Buick continues to be redefined as new vehicles such as the all-new 2013 Buick Verano add somewhat of a sports appeal to compact entry-level luxyr sedan package. The all-new 2013 Buick Verano, first introduced as a 2012 model, continues on its journey as an attractive entry-level luxury sedan offering up a comfortable ride and an economical yet powerful drivetrain.

I had the opportunity to spend some time in the all-new 2013 Buick Verano turbo. Enthusiasts will surely be astonished to know that my vehicle, a new option for 2013, was equipped with a 250 horsepower 2.0-liter turbocharged 4-cylinder engine mated to a 6-speed manual transmission. That is a 70-horsepower jump from the base Verano’s engine, further reiterating the notion of Buick not being a lackluster antecedent vehicle. Though, having 250 horsepower and 260 ft-lbs. of torque surging around 2,000 rpm, the new 2013 Buick Verano is still a subdued vehicle with many soft edges in the handling department – something its target demographic may still appreciate. 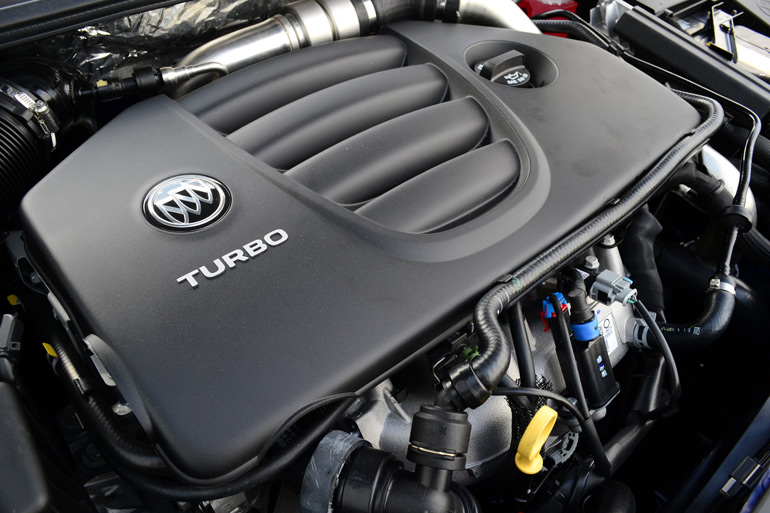 The new 2013 Verano offers 4 different trim levels starting the base model then moving up to the Convenience Group, the Leather Group and the Premium Group. The 2.0-liter turbo 4-cylinder is part of the Premium Group trim, also adding sport pedals, spoiler and dual chrome-tipped exhaust. 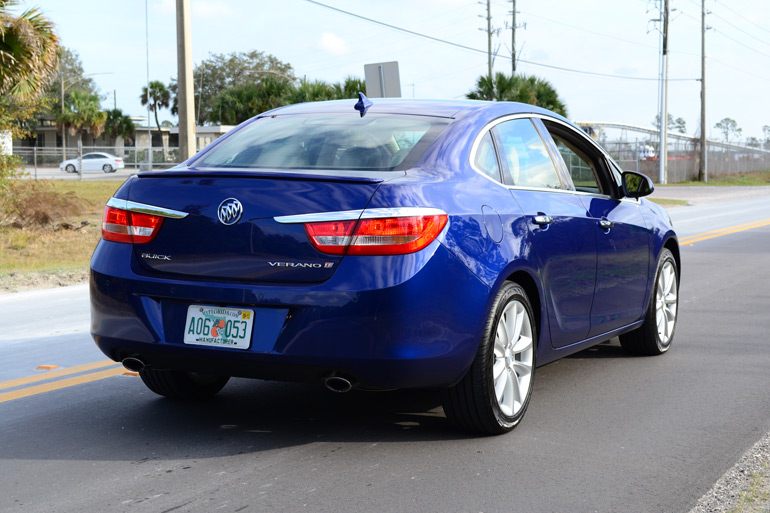 Driving the new 2013 Verano turbo 6-speed, only offered in the Premium Group trim level, fits the ideal touring sedan scenario. The 6-speed manual transmission has a bit of an indirect feel to it and long throws. The 2.0-liter turbo 4-cylinder is poised to manage the job of propelling the new Verano to 60 mph in just 6.6 seconds. Though, some of that oomph comes at a price of the relatively soft suspension during acceleration. Though, being a front wheel drive car with a turbocharged engine, torque steer is kept to a minimum. 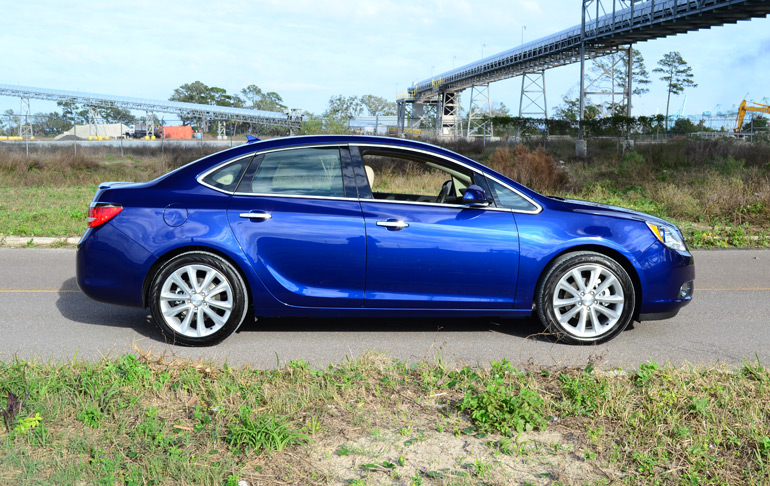 The body balance, unfortunately, is a bit upset with the ample 260 ft-lbs. of torque, which comes on a bit late into the rev range. I found that the Verano’s turbo powermill, has a short attention span. Basically, the midrange is where all of its athleticism is expunged. Until you hit 2,500 rpm things are a bit dull. Then, on the high end, the engine starts to meet its power-demise around 5,800 rpm all the way to its 6,500 rpm red line. In the end, the Verano Turbo 6-speed manual requires a bit of extra work from the driver to keep the engine at bay.

Possibly, the short power band could be a good thing for enthusiasts who really engulf themselves into quickly rowing through the gears often. On the other hand, this could be a bad thing for more relaxed drivers, but that is what the standard 6-speed automatic transmission option is for. 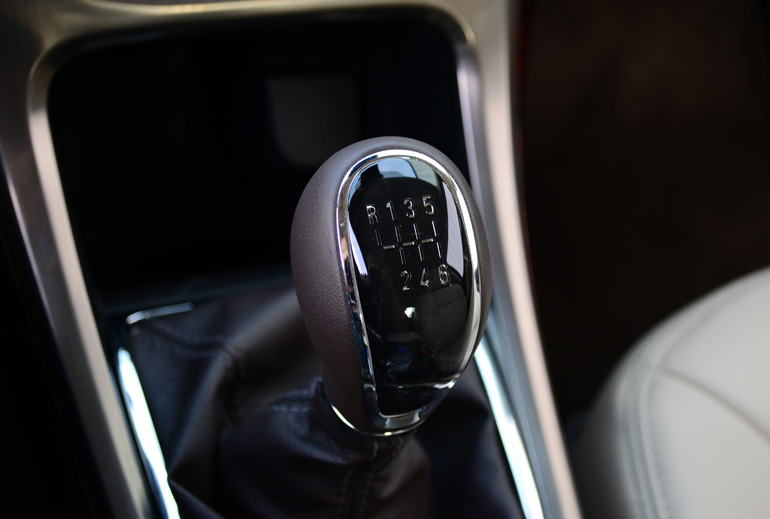 Buick’s character has changed over the years with a new-found contemporary styling to the exterior. Still, Buick vehicles are easily recognizable but now have a sporty flare about them that tends to blend them into the main-stream more so than ever. The 2013 Buick Verano has that appealing ‘almost-sporty’ style going for it. The exterior body panels, despite sharing many chassis components with the Chevrolet Cruze, gives the Verano its own unique character apart from the rest of Buick and GM’s line of sedans. Having standard 18-inch alloy wheels shod in 235/45 Continental rubber along with the Premium Group’s rear spoiler, only add to the Verano’s exterior appeal. Not to mention, the 18-inchers aid in the ride quality, what is otherwise a soft suspension that absorbs most small imperfections in the road. 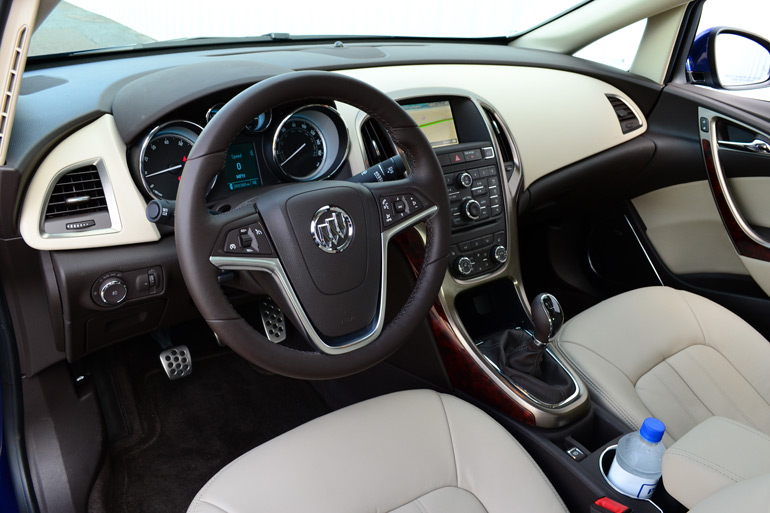 Inside of the new 2013 Buick Verano is a familiar interior layout, characteristic of other midsized sedans from GM. Though, the Verano takes a slightly different approach with is gauge cluster and center LCD touch-screen, much of which is unique to Buick. Button layout is good with many soft-touch areas and good fit and finish. Much of the instrument panel and layout of the interior can be somewhat of a mixed bag when you find wood trim, aluminum sport pedals and about 3 other color variations throughout. It is a good contrast but does not really help explain the Verano’s character, at least from the inside of the car. 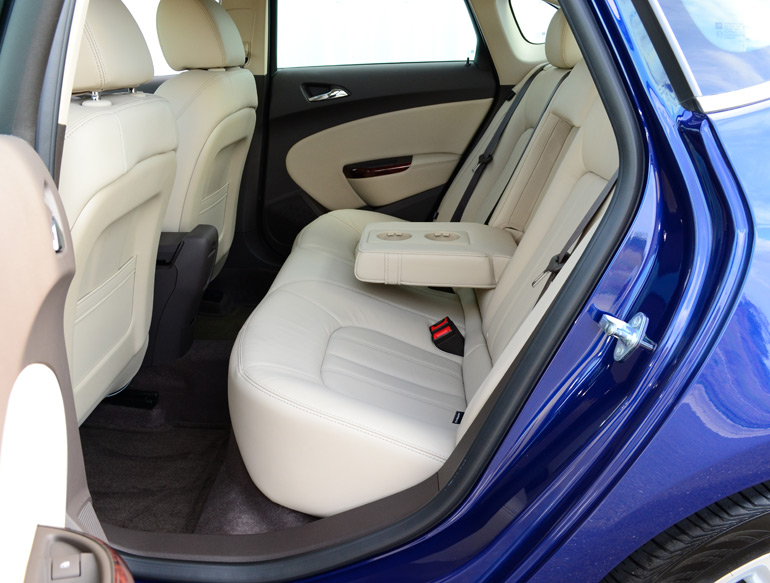 The front seating positions are excellent and the soft leather seats are somewhat supportive. Rear seating is a bit short on legroom but has a good height for passengers who may be 6-feet tall. Anything over may not want to ride in the back.

At the heart of the new 2013 Buick Verano, selecting the Premium Group with is turbocharged engine is surely the ticket to having a complete package. The standard 2.4-liter 4-cylinder engine with 180 horsepower and 170 pound-feet of torque, leaves the Verano somewhat incomplete. I can say with a certainty that the 2.0-liter Turbo engine makes the Verano a seriously attractive package for the mild enthusiast. Not to mention, gas misers will be happy to know that the turbo 4 has a matching EPA estimated 21 mpg city to that of the 2.4-liter engine. Highway mileage is 30mpg highway in the turbo-4 and 32 mpg highway in the 2.4-liter. Still, that is only a slight difference, but you must consider the additional 70 horsepower and 89 pound-feet of torque. That alone is a deal maker for the lighthearted enthusiast.

Pricing on the 2013 Buick Verano is kept competitive when pitted against few compacts and midsized sedans in an entry-level luxury class. A base Verano can be had for $23,080 plus destination charge while my loaded up Verano Turbo Premium Group 6-speed manual carries an as-tested price of $31,685 including an $885 destination charge. The options included on my 2013 Verano Turbo included a power sunroof and upgraded audio system with navigation, in addition to the Premium Group’s add-ons featuring the 2.0-liter turbocharged engine.