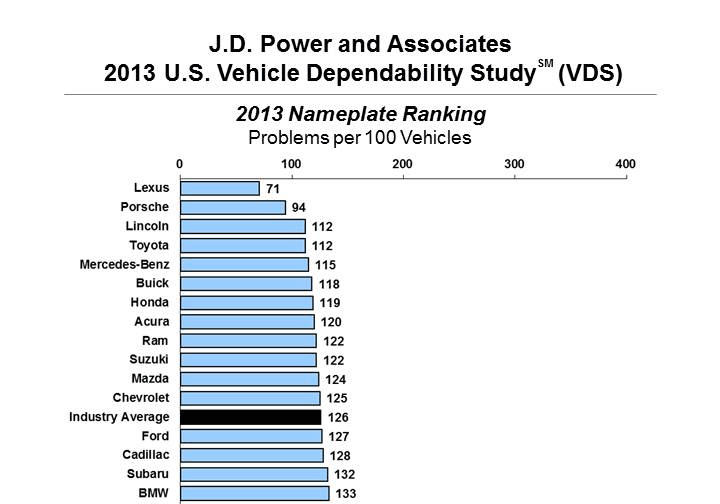 There have been some movers and shakers in the automotive industry lately not only in terms of innovation and design, but also in the dependability spectrum. Every year J.D. Power and Associates release a Vehicle Dependability Study (VDS) ranking problems per 100 vehicles for all makes and for a short list of individual models taking top spots for specific vehicle segments.  Having a 2-year variance, the 2013 VDS report spills the data on 2010 model year vehicles represent the direction automakers are headed within the number of problems per 100 vehicles reported by consumers.

For the 2013 VDS Lexus and Porsche continue to lead the way as they did in the previous year. Looking down the list you may take notice to some serious moves, one in particular being Ram moving up an astonishing 20 spots from the 2012 VDS report. Other notable changes include Infiniti, Mazda and Ford moving up the list from previous years.

For individual models within their respective segments, Toyota takeing a majority stake with a top spot in 7 out of 18 vehicle segments. General Motors managed to capture top placement in four categories.

The study, now in its 24th year, measures problems experienced during the past 12 months by original owners of three-year-old vehicles (those that were introduced for the 2010 model year). Overall dependability is determined by the number of problems experienced per 100 vehicles (PP100), with a lower score reflecting higher quality.

In 2013, the dependability of models that were new or substantially redesigned for the 2010 model year averages 116 PP100, compared with 133 PP100 for models that were unchanged from the 2009 model-year–also referred to as carryover models. This is the first year that there are fewer reported problems for all-new or redesigned models than for carryover models since the study was redesigned in 2009. Models that were refreshed in 2010–those with generally minor changes to the interior or exterior–average 111 PP100 in the 2013 VDS.

“There is a perception that all-new models, or models that undergo a major redesign, are more problematic than carryover models,” said David Sargent, vice president of global automotive at J.D. Power and Associates. “Data from the 2013 VDS suggests that this is not the case. The rapid improvement in fundamental vehicle dependability each year is more than offsetting any initial glitches that all-new or redesigned models may have.”

“The continuous improvement in long-term dependability means consumers should have more confidence in three-year-old vehicles, whether they are keeping their current vehicle or shopping for a used car, truck, crossover or SUV,” said Sargent. “This means there are a lot of dependable off-lease vehicles in the used-vehicle market. It also means that owners who keep their vehicle beyond the manufacturer’s warranty period are able to have greater peace of mind that vehicles are becoming increasingly more dependable. That said, it is virtually certain that new vehicles being sold today will be even more reliable in three years.”

“It’s one thing to ask consumers if they intend to buy another vehicle from the same brand, but it is much more impactful to know what happens when they actually buy their next vehicle,” said Sargent. “By combining our consumer research with trade-in data, we see a clear correlation between dependability and loyalty.”

Highest-Ranked Nameplates and Models
Lexus ranks highest in vehicle dependability among all nameplates for a second consecutive year. Among models, the Lexus RX has the fewest reported problems in the industry at just 57 PP100. This is the first time in the history of the VDS that a crossover or SUV has achieved this distinction. Rounding out the five highest-ranked nameplates are Porsche, Lincoln, Toyota and Mercedes-Benz. Chrysler Group LLC’s Ram brand posts the greatest year-over-year improvement from 2012–by 52 PP100.

J.D. Power and Associates offers the following tips for consumers regarding vehicle dependability:

The perception that all-new or redesigned models can’t be as dependable as those that have been on the market for a year or more is not accurate. Just because a model is new to the market or has been recently redesigned doesn’t necessarily mean it won’t be as reliable. In fact, dependability of all-new and redesigned models is at a record high, according to 2013 VDS data.
Dependability of three-year-old models is at an all-time high. If you can’t afford a new vehicle, or simply don’t want one, you should feel confident when buying a certified pre-owned (CPO) vehicle. Whether buying a CPO vehicle or not, be sure to check quality, appeal and dependability ratings of models you are considering on jdpower.com.

Improvements in vehicle dependability have been made by both domestic and import brands, and the gap between the two is narrowing. Perceptions of dependability should not be based purely on vehicle origin–consumers should research a variety of sources in order to make a decision consistent with the current reality of the market.

The 2013 Vehicle Dependability Study is based on responses from more than 37,000 original owners of 2010 model-year vehicles after three years of ownership. The study was fielded between October and December 2012.

Find more detailed information on vehicle dependability, as well as model photos and specifications, by reading articles and reviewing brand and segment dependability ratings at http://www.jdpower.com/dependability

About The McGraw-Hill Companies
The McGraw-Hill Companies (NYSE: MHP), a financial intelligence and education company, signed an agreement to sell its McGraw-Hill Education business to investment funds affiliated with Apollo Global Management, LLC in November 2012. Following the sale closing, expected in early 2013, the Company will be renamed McGraw Hill Financial (subject to shareholder approval) and will be a powerhouse in benchmarks, content and analytics for the global capital and commodity markets. The Company’s leading brands will include: Standard & Poor’s, S&P Capital IQ, S&P Dow Jones Indices, Platts, Crisil, J.D. Power and Associates, McGraw-Hill Construction and Aviation Week. The Company will have approximately 17,000 employees in more than 30 countries.