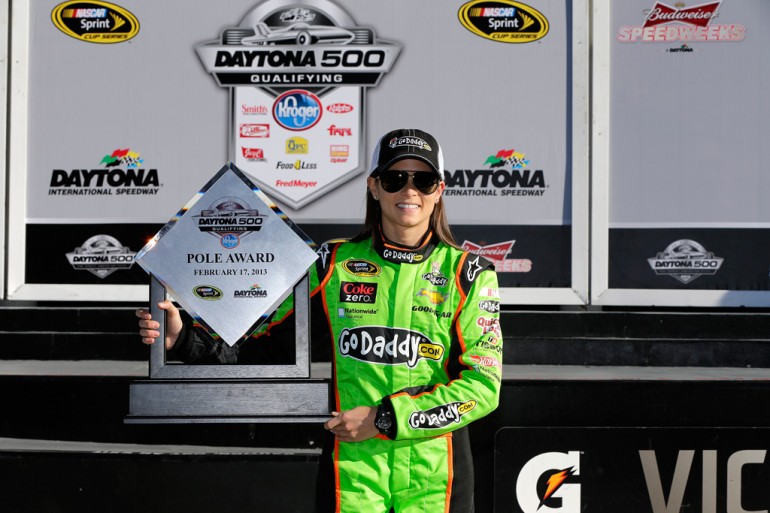 Love or hate the marketing machine that is Danica Patrick, there’s no denying that she’s managed to accomplish quite a bit in her racing career. To date, she’s the only woman to ever win an IndyCar race, the first woman to lead the field in the Indianapolis 500 and the first woman to earn a NASCAR Nationwide Series pole. To her resume, Patrick can now add one more first: the first female driver to earn a pole position in the NASCAR Sprint Cup series.

On Sunday, Patrick turned a lap of 45.817 seconds, at 196.434 mph, at the Daytona International Speedway. That was fast enough to put her on the inside of row one for the Daytona 500, arguably the most significant race on the NASCAR Sprint Cup schedule. What’s more impressive, perhaps, is that Patrick beat veteran drivers in what is only her second Sprint Cup start at the track.

Patrick’s teammates at Stewart-Haas racing also ran well, with Ryan Newman fourth-quickest and Tony Stewart fifth-quickest. Since Sunday’s qualifying set only the front row, all we know for sure is that Jeff Gordon will be beside Danica Patrick on row one. The remainder of the 43 total starting positions will be set during Thursday’s Budweiser Duel races, which consist of two 150-mile events.

While Patrick’s run is impressive, the Stewart-Haas driver has struggled in traffic. The switch to the Generation Six cars for 2013 won’t make things any easier, as the number of crashes racked up to date have shown that successful drafting will require new techniques. Any chance of winning the race will require Patrick to stay out of trouble for the duration of the event, then partner with other drivers for a charge to the front.

Patrick has always been a reasonably strong qualifier, but can she pull out a win in the Daytona 500? We’ll find out on Sunday.