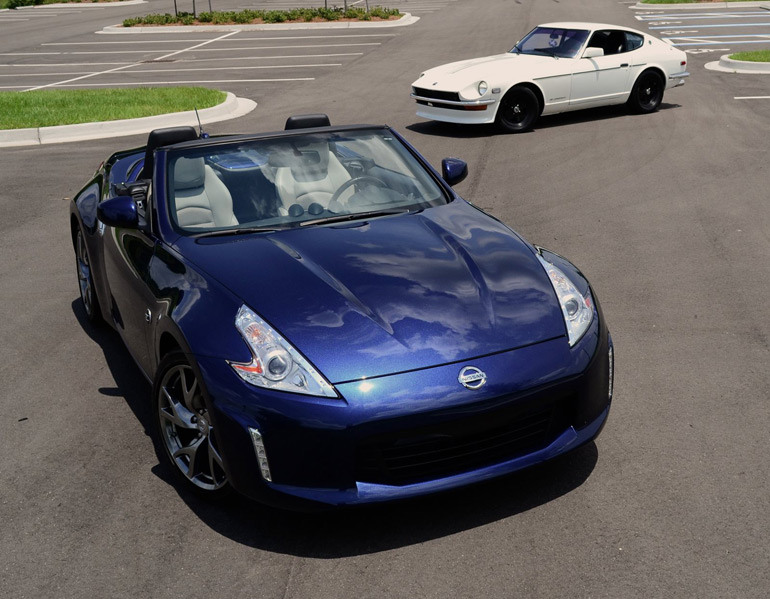 Nissan’s Z-car heritage is alive and well, residing in the latest iteration including the convertible variation featuring roadster-like styling and a sports car edge. For the model year 2013, Nissan revises the front end with new LED running lights, while an optional Sports package gets revised euro-tuned shocks for better balance in road handling and comfort. 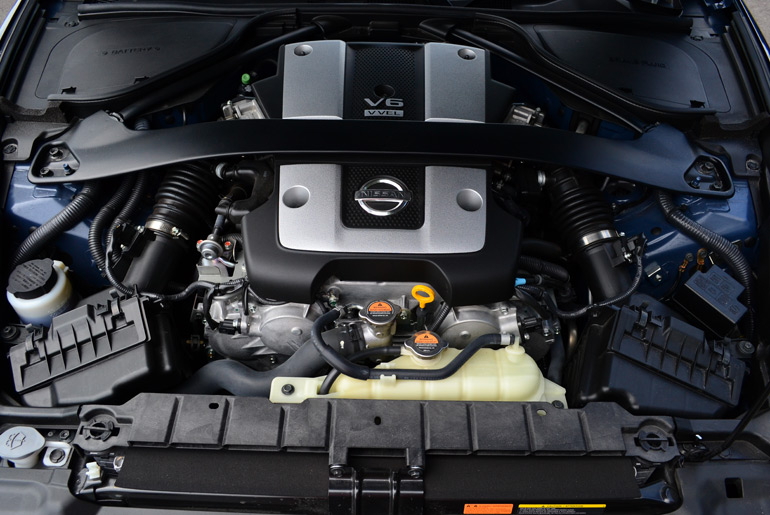 Powered by the highly praised VQ-series 3.7-liter V6 engine, the 370Z keeps its competitive edge even when you are allowed to fold the top down. With 332 horsepower at 7,000 rpm and 270 lb-ft. of torque at 5,200 rpm, the new 370Z keeps its paces on par with its competition. Still offering the choice of an intricate SyncroRev Match 6-speed manual transmission or the adaptable 7-speed automatic with steering column-mounted paddle shifters, the Z car continues to appeal to a wide range of enthusiasts. 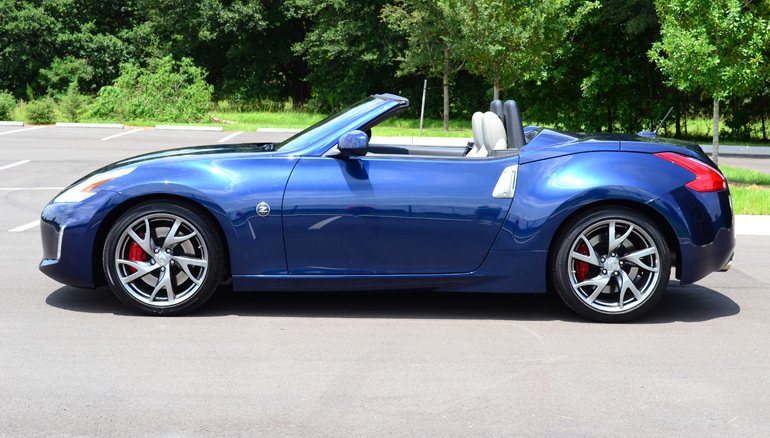 The SyncroRev Match system found in my new 370Z roadster test vehicle is a feature that is just now starting to show up in many other sports cars that still offer up a manual transmission. Though, as a dying breed, the 6-speed manual box bridges its life over to Generation Y’ers with the adaptation of its rev-matched downshifts. Basically, the system automatically controls the throttle upon recognizing a shift into a lower gear from the previous. It works pretty good to give novice and competent drives the ability to perform seamless rev-matched downshifts. The system also aids in upshifts on those rare occasions you take an ample amount of time to up-shift where the engine speed no-longer matches the rotational speed of the vehicles wheels – the system will place the throttle in the position to match the shift.

The engine, virtually unchanged from the past few years, remains to have a wide usable RPM range of power. At its sweet spot, about 5,000 rpm all the way to redline at 7,000 rpm, the engine keeps you well entertained. That entertainment comes with some subtle punishment with the characteristic peddle and floorboard vibrations that we have grown to know all-to-well in the 370Z. 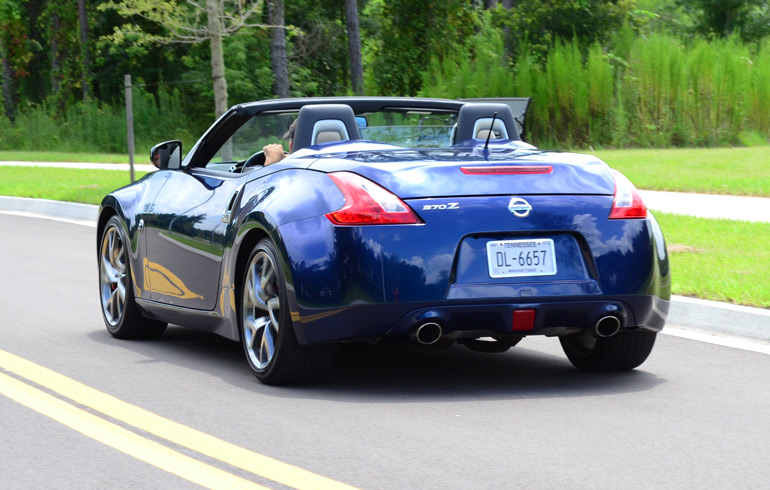 In comparison to the 370Z Coupe, the Roadster tends have a bit of the expected body flex. Nevertheless, body flex and vibrations are kept to a minimum with the implications of the 370Z Roadster having the proper reinforcements and suspension tweaking to nearly match the Coupe in performance. As far as 0-60 mph time variances go, the 370Z Coupe makes the run in 5.1 seconds while my 370Z Roadster is capable of taking just 5.5 seconds to reach 60 mph.

Handling and road adaptation in the 370Z Roadster is virtually identical to that of the Coupe. The well-balanced chassis of the 370Z Roadster has an open line of communication when behind the driver’s seat allowing you to kick the rear-end out and bring it back in line with ease for any proficient driver. The 6-speed manual gearbox also meets the demand for capable drivers with quick and direct shifts. 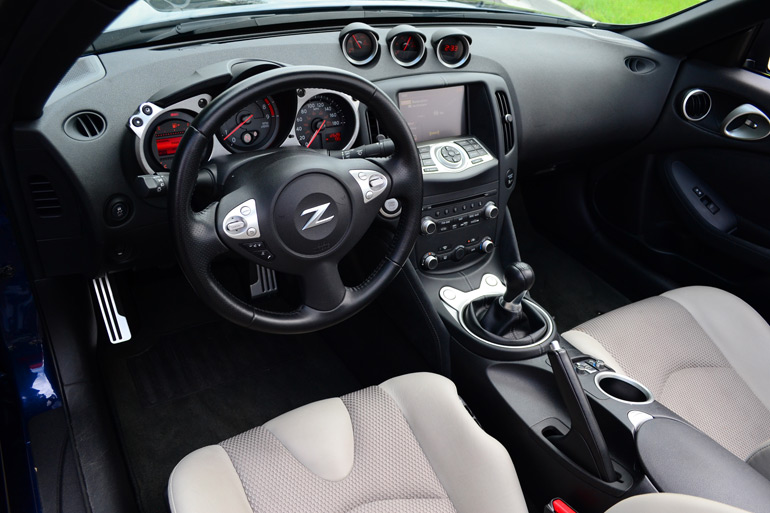 Having had an abundance of time behind the wheel of the 370Z coupe and convertible variations over the past few years, we can all agree on its Z heritage and true sports car character remaining intact as an appealing enthusiast-oriented two-seater. The Nissan Z Roadster, with its power-folding soft-top, now can be optioned out with a respectable list of options once only available on the Sport Touring Coupe trim. 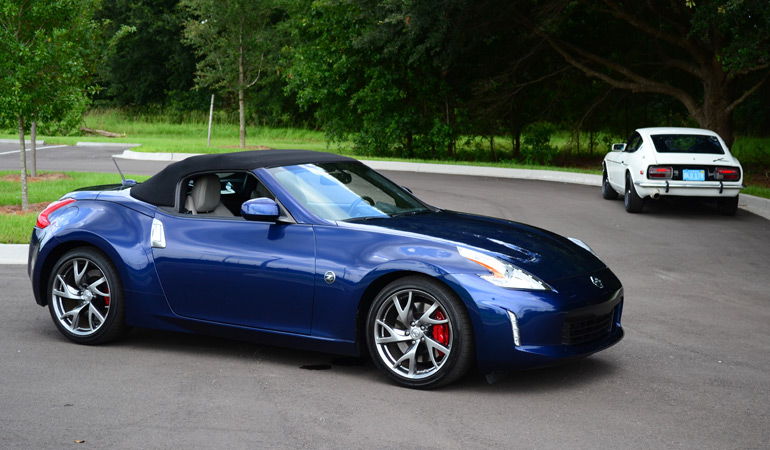 The Nissan 370Z’s styling is unmistakable in either Coupe or Roadster form. Its design pays homage to the classic Z car’s original design and impression on the road. Getting past the great design and excellent drivetrain, one would have to employ the 370Z Roadster’s uniqueness and long list of options to digest the as-tested price of $50,055. Although, the base price of a 370Z Coupe starts at just $33,120, the contrasting acceptance would reside on the Z Roadster being a rare and unique breed among sports cars and half of the price of its bigger brother, being the pavement shattering GT-R, which isn’t available in a drop-top form.