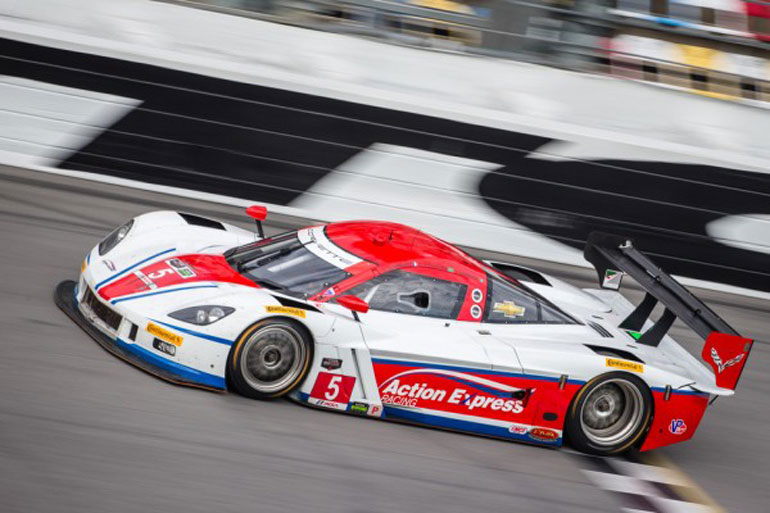 The 52nd run of the Rolex 24 race at Daytona commenced yesterday captivating automotive enthusiasts all over the world. The field started off as any man’s race but was abruptly halted momentarily with a red flag due to a horrific crash involving the No. 62 Risi Competizione Ferrari (GTLM) driven by Matteo Malucelli who was plowed into by Memo Gidley in his No. 99 GAINSCO/Bob Stallings Racing Corvette DP (GTLM). Both drivers were awake and communicated after being admitted to the hospital where Gidley required surgery for a broken back, injuries to his left arm and left leg. Malucelli is being held for additional evaluation but resting comfortably.

90 minutes or so later the race restarted after a lift of the red flag and clearing the crash debris.

Joao Barbosa (Sebastien Bourdais, Christian Fittipaldi) in the No. 5 Action Express Racing Corvette DP took home the over-all win and win in the Prototype class while Patrick Pilet (Richard Lietz, Nick Tandy) in the No. 911 Porsche North America Porsche 911 RSR captured the win for the GT Le Mans class. Alessandro Pier Guidi in the No. 555 Level 5 Motorsports Ferrari 458 Italia finished first in the GT Daytona class but some controversy ensued as officials announce a time penalty for allegedly having contact or not leaving a lane to Markus Winkelhock (Nelson Canache, Spencer Pumpelly Jr, Tim Pappas) in the No. 45 Flying Lizard Audi R8 LMS, which ultimately took the win. Colin Braun (James Gue, Jonathan Bennett) brought home the win in the No. 54 Core Autosport ORECA FLM09 for Prototype Challenge class.

Update: Level 5 Motorsports No. 555 Ferrari 458 Italia GT3 has been announced as the new GT Daytona Class winner after IMSA officials revealed the situations after a protest filed by Level 5.

“A full post-race review of the incident on the last lap of the 52nd Rolex 24 At Daytona was completed by IMSA Supervisory Officials. The decision has been made to reverse the decision by the race director, rescind the penalty against the No. 555 Level 5 Motorsports Ferrari 458 Italia team, and reinstate drivers Scott Tucker, Bill Sweedler, Townsend Bell, Jeff Segal and Alessandro Pier Giuidi as the GT Daytona class winners. We regret the confusion following the race, and appreciate the patience by our fans, drivers, teams and the media so we could properly review and subsequently report this decision.”

Elkins expanded on that official statement shortly thereafter: “The uniqueness of this was that it was on the last lap of a 24‑hour race, and so the race director was doing exactly what he is expected to do, which is to make a decision and try to have some finality prior to the end, and that’s what he did,” he said. “The process worked.  If you’re asking could we have done it differently, I don’t think so.”

“The fact is the winning team is now declared the winner, and I think that’s the right thing that needs to happen.”