In 1965, Toyota made a move that revolutionized the auto manufacturer’s reputation and fearlessly initiated the import sports car movement. Known as the most conservative of all Japanese car makers, Toyota wanted to strike out with a car that would rival the Porsche 911 and the Jaguar XKE in both style and performance. In collaboration with Yamaha, Toyota built the rear wheel drive, two-seater, 6 cylinder 2000GT. Limited in production, only 351 were produced, the 2000GT showed the world that Japan was capable of making cars that not only exhibited unsurpassed quality, but looked incredible and were fun to drive on the road or race track. Toyota crafted the 2000GT to at standard that even at the asking price of $6800, the company lost money on every car sold. For reference the 1965 Porsche 911 stickered at $6500 and the Jaguar XKE sold for $5600. 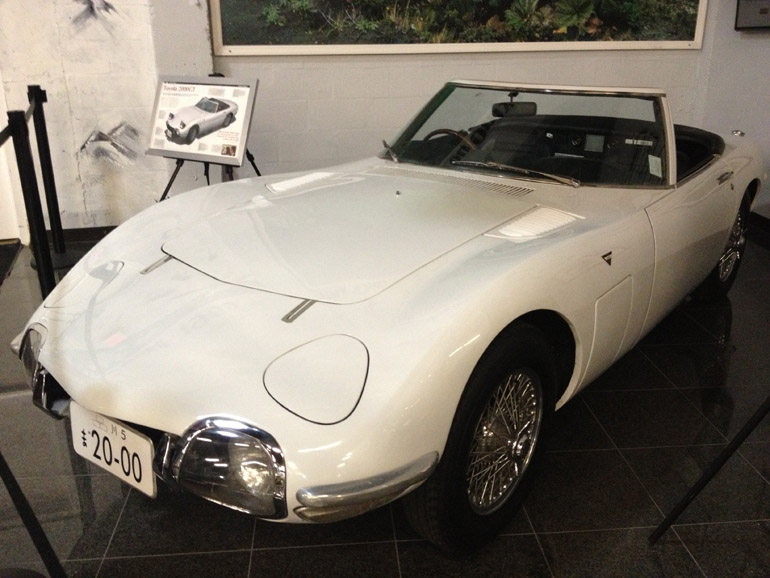 The styling and performance of the 2000GT inspired Nissan, then known as Datsun in the US, to build what many consider the grandfather of the modern import sports car, the 1969 Datsun 240z. The 240z followed the basic formula of the 2000GT as a rear wheel drive, two-seater, grand tourer powered by a stout inline 6, but did it for less than half the asking price. An enthusiastic reception from the US market allowed Nissan to sell over 168,000 first generation Z cars, eventually becoming the best selling sports car of all time. 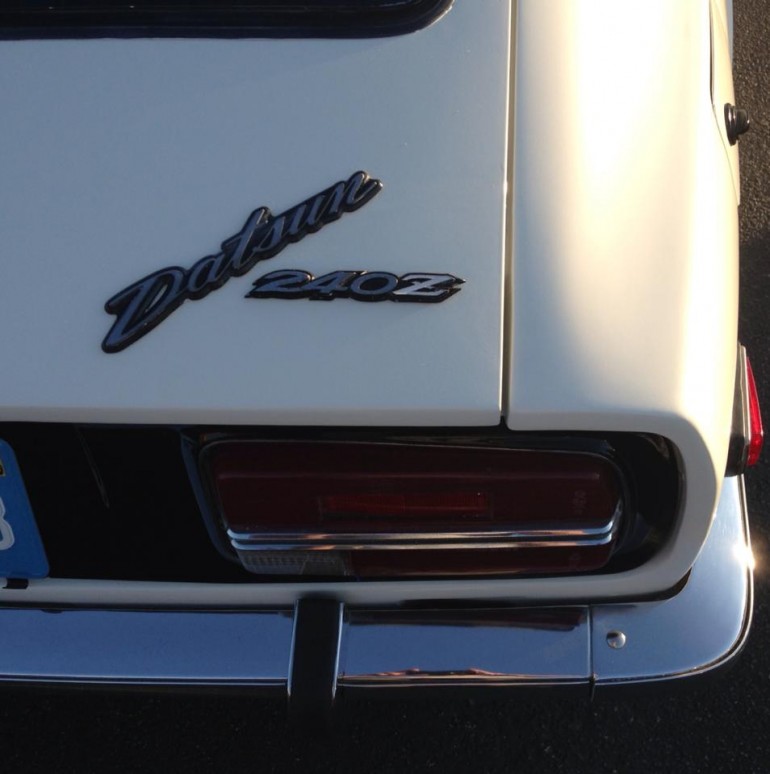 Over time the Toyota and Nissan flagship sports cars evolved, growing in size, weight and price. Both cars eventually ceased production by essentially pricing themselves out of the sales market. After a five-year hiatus in the US, Nissan reinvented the Z car in the form of the 2002 350z, but Toyota remained relatively silent on the flagship sports car front. Rumors would travel around the Internet from time to time, but the manufacturer never officially hinted of a new car in the lineage of the 2000GT. 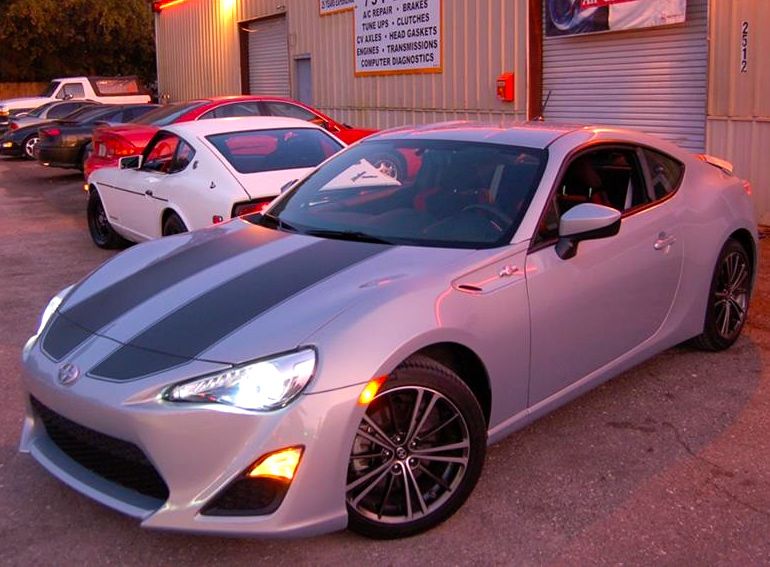 In 2009, Toyota announced the FT-86 concept at the Tokyo Auto Show. Inspired in part by the AE86 Corrolla and the Sports 800, the FT-86 had even more in common with the original 2000GT. Not only did the Toyota concept and the 2000GT look alike, the FT-86 was also the result of two Japanese auto manufacturers working together to build an industry standard sports car. This time around it was Toyota manufacturing the coachwork and Subaru providing the 4-cylinder 2.0-liter boxer (horizontally opposed) engine producing 200 horsepower and 151 ft. lbs. of torque. 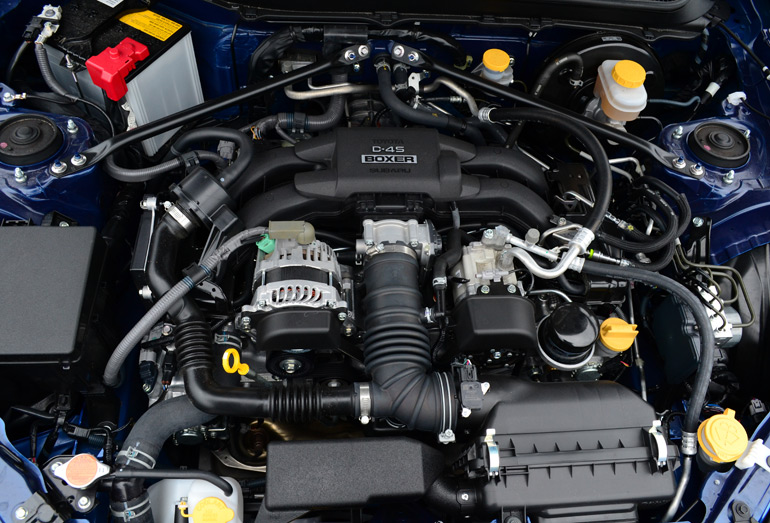 The warmly received concept soon entered into full production, getting the 86 and GT86 moniker in Japan and Europe. For the US market, the car was rebranding as the Scion FR-S and launched with great anticipation alongside its twin brother the Subaru BRZ for the 2012 model year. 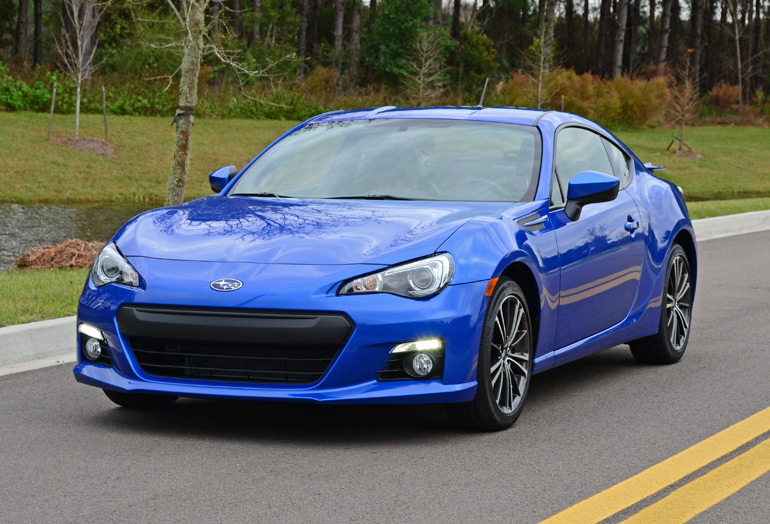 The Scion FR-S had an immediate fan base. Critics loved it. The car sold so well that dealers experienced back orders for months at a time. It appeared that Toyota had reimagined the formula of a well-built, lightweight, great handling, affordable sports car in the heritage of the Toyota 2000GT, but priced more along the lines of Datsun’s best-selling 240z.

But will the FR-S live up to the legendary status of the early import sports cars? As the owner of a 1971 Datsun 240z, I couldn’t wait to find out! 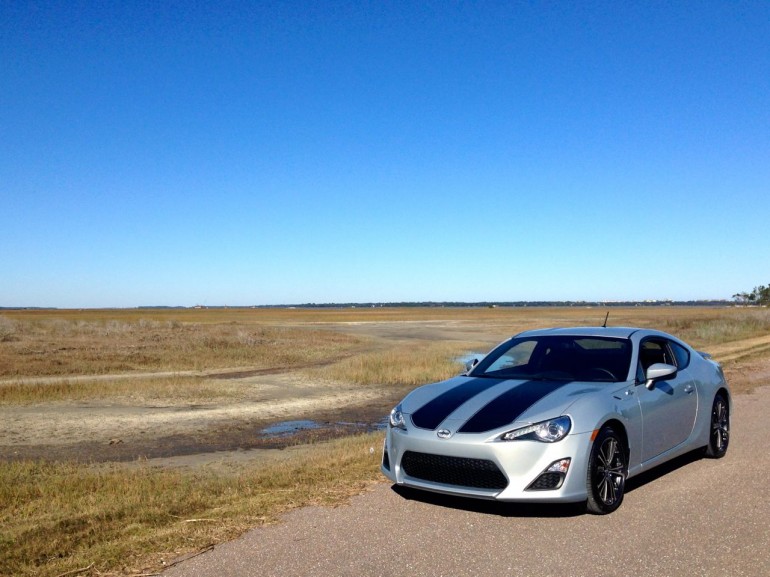 I picked up the 2014 Scion FR-S 10 Series at the Southeast Toyota Distributors Westlake Processing Center, located on the Westside of Jacksonville, Florida. The facility itself deserves a mention, providing jobs for many Jacksonville residents and giving Toyota a strong presence in northeast Florida. Many of the sport and luxury Toyota brand vehicles in the Southeast United States have the finishing touches completed at this facility. For instance, if your Camry came with leather seats, odds are Toyota installed them in Jacksonville.

The FR-S 10 Series comes equipped with a push button start. I sat down in the firm, but comfortable race inspired seat, buckled up and hit the button. I had read quite a bit about the high-revving Subaru boxer engine and quickly rolled down the windows so I could appreciate what it was up to. I placed the 6-speed rev matching automatic transmission in drive and drove off on what would become one of the most memorable weeks that I have ever spent with a car.

Approaching the northbound ramp of I-295, I sharply cut the wheel and stabbed the throttle. The rear end of the FR-S slid around to catch up with the front wheels and compliantly sped onto the highway. I could not stop smiling. The Scion is nimble and sure-footed, but make no mistake, the 2700 lb FR-S likes to dance.

The Scion FR-S has one of the lowest centers of gravity of any production car on the road today. We are talking Ferrari and Lotus territory. The finely tuned suspension, wide 17-inch tires, and record-book-low center of gravity means that the car handles incredibly well. I would argue that the FR-S is the best handling car under $50k, which is remarkable considering that FR-S starts at only $25,255 and the top-of-the-line FR-S 10 Series with an automatic is only $29,430. Adding to that value is that even with my led foot I was able to get an average of 30 mpg combined over the week that I drove the car. Scion officially claims the automatic gets an EPA 25 city/34 highway.

The 2014 Scion FR-S 10 Series is absolutely a driver’s car in the tradition of my 1971 Datsun 240z. When I had the two cars together in the driveway it was apparent that Scion had caught the vision of the affordable ‘70’s import and taken it to the next level. 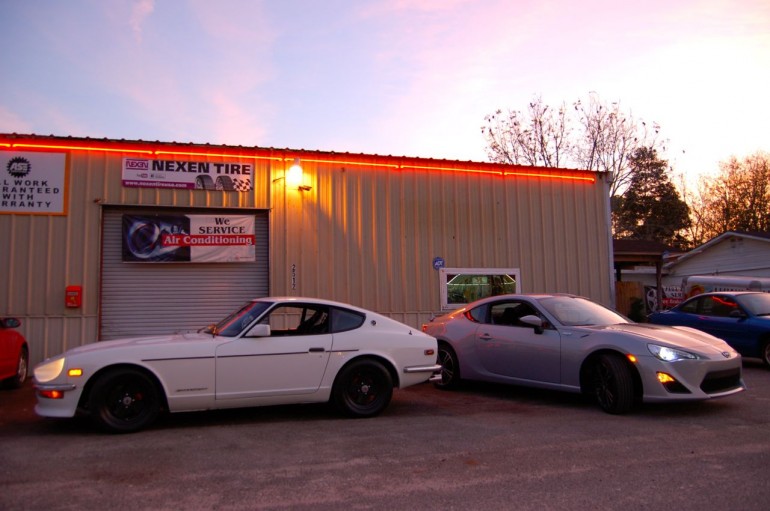 The FR-S is everything that the original import sports cars were and more.  The aesthetics, incredible driving performance, Toyota reliability and unequaled value, both in initial and long term cost, makes the Scion FR-S a well deserved top pick for sports cars under $30k. If you are in the market for a head turning car that is a blast to drive but won’t break the bank, the 2014 Scion FR-S might be the car for you.