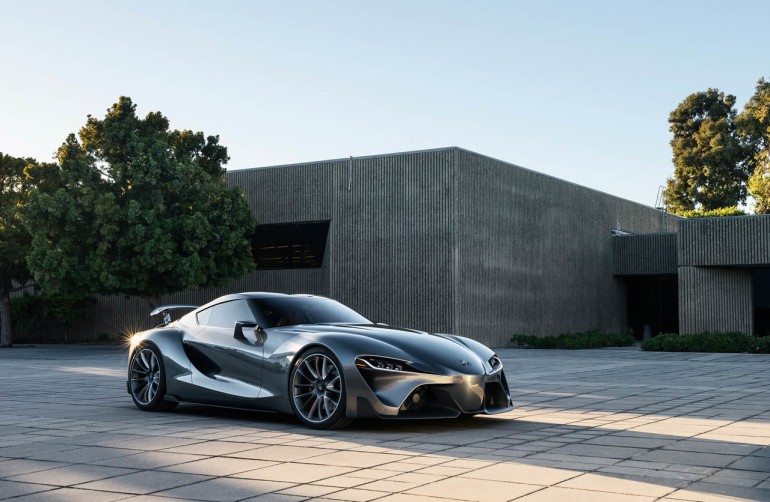 Today I don’t want to come off as being a know-it-all about cars in general, but our decades of knowledge combined makes it an easy task to dish out information about cars even without doing any painstaking research. It seems will I will completely avoid being called-out as a know-it-all mostly due to my efforts in speculating the next Toyota Supra have reached a frustrating point where I have no clue as to what Toyota is up to now. That’s right, all of my years of doing the “Car thing” has not prepared me for the teasing and perpetual waiting period all of us enthusiasts have endured in awaiting a true Toyota sports car potentially wearing the Supra badge again. 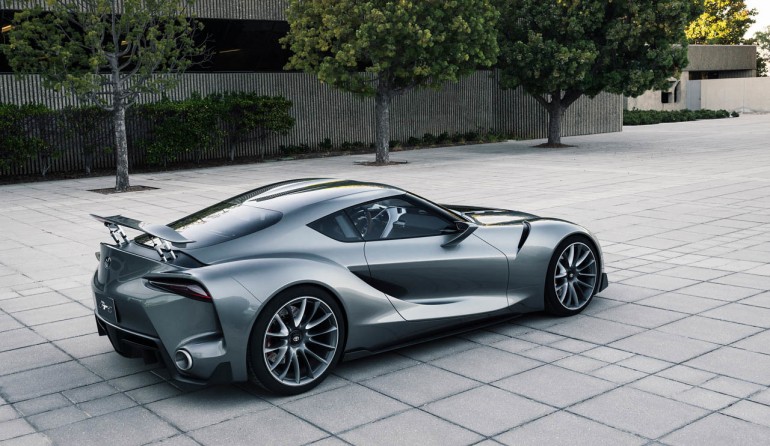 I say all of this because Toyota has dropped on us an ‘updated’ FT-1 Concept car, once again, confusing the crap out of us. The Toyota FT-1 Concept is in Pebble Beach this week with some slight tweaks possibly hinting at it inching towards production. The new photos show a slightly restyled Toyota FT-1 Concept featuring changes in the interior and a new graphite exterior color. Additionally, photos of a FT-1 Evo ‘race’ version were released showcasing aero tweaks as the Vision GT Concept in Gran Turismo 6. 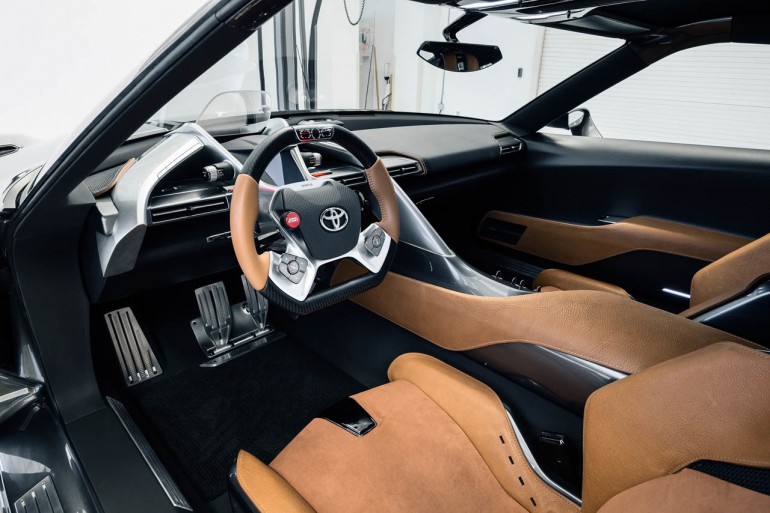 At this point I am not sure whether to think that Toyota is planning to officially introduce the FT-1 close to its concept form as the new Supra, or go off our previous reports of the new Supra having a design only “inspired” by the FT-1, which would look mostly different in a much subdued form. Your guess at this point is as good as mine. I guess we will need to watch the clock on this one. Hears to hoping that the new Supra looks JUST LIKE the FT-1 Concept car we see here!

August 13, 2014
TORRANCE, Calif. (Aug. 13, 2014) – Proof that its beauty lies on the inside and out, Toyota revealed today a second interior styling and exterior color for an upscale interpretation of its sensational FT-1 sports car concept. Developed by Calty Design Research in Newport Beach, California, the concept vehicle’s graphite exterior paint and light, saddle-colored leather went on display for the first time at the Gordon McCall’s Motorworks Revival gala held on California’s Monterey Peninsula.

The original FT-1 concept ignited sports car enthusiasts and the automotive world with its January debut at the North American International Auto Show. Labeled the spiritual pace car for the new direction of Toyota Global Design, the muscular, curved exterior builds on Toyota’s rich sports coupe heritage dating back to the 2000GT, Celica, Supra, MR2 and most recently Scion FR-S. That first vehicle stunned in a bold red, while this second FT-1 impresses with sophisticated graphite. Both share the deeply sculpted intakes and outlets that support its track-ready nature and the dramatic lines seemingly shaped by the wind. It’s a look that gets the heart racing.

The color of the upscale leather changes between the first and second FT-1 vehicles, and the visual difference is striking. The first car was dominated by bold, masculine black that keeps the driver focused on the road, while red painted edges and raw metals provide intriguing accents. In the second, the natural leather on the seat is supple with an all-natural grain, giving it an authentic appeal. The painted edges that are red in the first concept are now subtly blended brown in the second. The intention is to bring in a more sophisticated feel and authenticity through color choice, showcasing the versatility of the FT-1 sports car concept. Enthusiasts who desire a more pure high-performance experience might choose the black-red pairing, while others may desire the premium, athletic feel of the saddle leather.

“From the start of the FT-1 project, we wanted the driver to have a feeling of flow while at the wheel – to be able to focus on the road and nothing else,” said Sellene Lee, the Calty creative designer who proposed both color concepts. “In the color studio we help create the atmosphere of the vehicle, and our aim was to ensure everything supported the driver through efficient choices. The saddle leather maintains that same ‘in the zone’ driving intention, while bringing in a more premium feeling.”

Superhero Inspiration for the Interior

Sellene Lee drew inspiration for the FT-1 interior from the modern, high-tech performance materials used for today’s superhero costumes. A movie poster drew her attention to the modern shift from past heroes’ bright tights and colors to today’s performance fabrics and function. To achieve the FT-1’s advanced-looking, intricately detailed interior, Sellene Lee and the team compared leather thicknesses, grain sizes and textures to find the perfect combination. Raised metal mesh provides ventilation for the seats while lending a more textural, bold effect that beautifully matches with the metal accents. A dimensional embossed pattern on the instrument panel leather brings in a 3-D, technical look.

“From color and trim standpoint in the FT-1, there was a laser-like focus on staying true to function,” said Wendy Lee, studio chief designer at Calty. “This project was very special, as the FT-1 stands apart in its performance-driven, authentic purpose.”

Beyond her superhero performance material concept, Sellene Lee moved away from the typical stitching or piping edge treatment found in many vehicle interiors. The painted red edges on the welded leather and painted brown edges on the second FT-1 were inspired by high-end leather bags she found in an upscale department store. When drivers sit in FT-1, they can feel the difference in materials, textures and color choices that resulted from the team’s work.

Double the Fun in Gran Turismo 6

This September, two new versions of the FT-1 will be available for download virtually inside Gran Turismo 6 (GT6), the latest iteration of the best-selling racing franchise exclusively on PlayStation®3. Like the red FT-1 introduced in January, the graphite FT-1 concept roars onto the Gran Turismo 6 racetrack as a downloadable vehicle for a limited time. Additionally, in celebration of the 15th anniversary of the Gran Turismo series, Calty has also designed an ultra high-performance race version of the FT-1 that inside the game is called the FT-1 “Vision GT.” This high-powered version interprets what a full-race FT-1 might achieve on the track. See how the FT-1 Vision GT came to life by watching this video: https://www.youtube.com/watch?v=uuXFyCHp59w

The GT6 played an important role in helping key executives (including Toyota President Akio Toyoda) better experience the FT-1 concept prior to building the vehicle. Both virtual versions capture the same excitement, passion and performance the physical FT-1 vehicles inspire in those who see them.