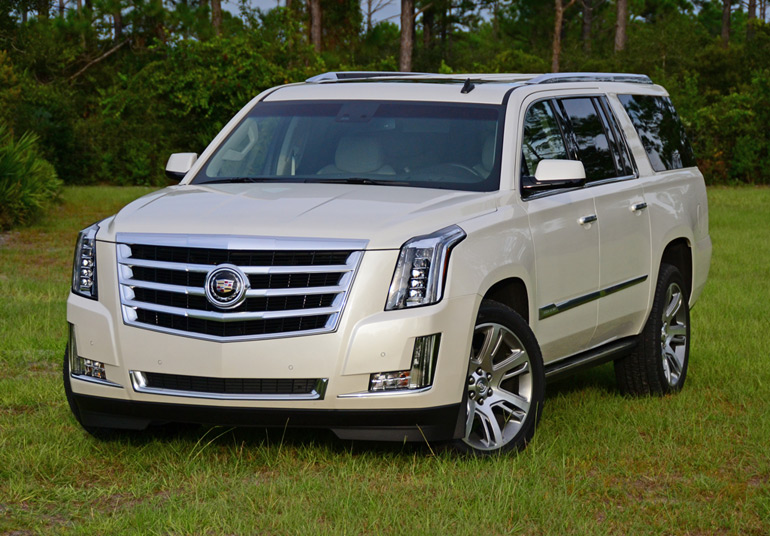 The all-new 2015 Cadillac Escalade, the king of large SUVs, has taken a bow with its completely redesigned platform. If there ever was an SUV that has captivated so many with its broad stature and luxury signification in many different demographic facets, it is the Cadillac Escalade. With its complete redesign for 2015, the Cadillac Escalade embarks on a similar journey to retain its king of the hill status when it comes to having your cake in eating it too in the spectrum of the largest and most luxurious SUV you can find on the road today. 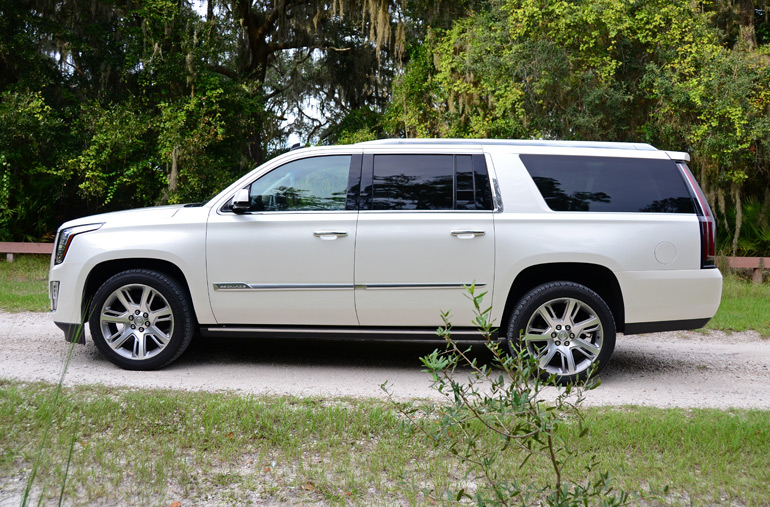 I consider myself to be humble about my vehicle choices. Even my color options of silver or black do their job as to limit unwanted attention. However, I cannot help but to drive the test vehicles that we receive each week around town attempting to avoid any connotations with the images that some of the test vehicles project. Sometimes, that projected image speaks louder than words, as it does in the all-new 2015 Cadillac Escalade ESV, which projects a massively-sized image, an ego that is worth the mass of the Escalades front grill in gold. There really is no way to get around the prominent image that the all-new Cadillac Escalade projects, especially having the ESV variation in my possession, which is the long-wheel-base version matching the size of its Chevrolet Suburban cousin. That image really isn’t all that bad considering there are many positive perceptions of the Escalade, just be careful who you ask. 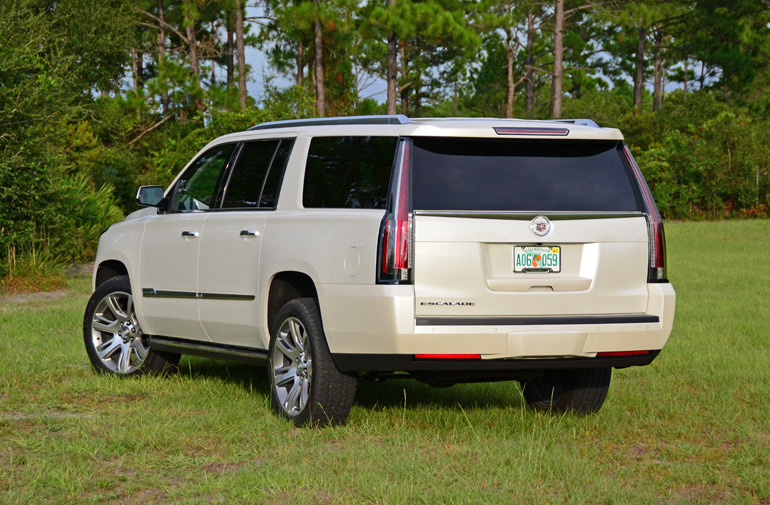 The all-new 2015 Cadillac Escalade ESV is undoubtedly a huge vehicle. The weight of my fully loaded Escalade ESV 4WD test vehicle tips the scale at 6,040 pounds. Certainly far from a lightweight, but not like the kid who splurges on too much birthday cake – there is still some composure here, believe it or not. Surprisingly, the new 2015 Escalade is stout in its ability to carry that weight without being the last to cross the finish line. Powered by a 6.2-liter V8 engine producing 420 horsepower and 460 lb-ft of torque make things come alive quickly, in a literal sense. The engine, transmitting its power to the rear wheels or all four by selecting the 4WD-high mode, mates to a 6-speed automatic transmission – a proven attribute for the rugged side of the new Escalade. Power is smooth but serious to the tune of reaching 60 mph in just over 6 seconds. That’s an amazing feat for an SUV. Actually, it is a magical achievement for the new Escalade ESV having 6,040 pounds to move around. 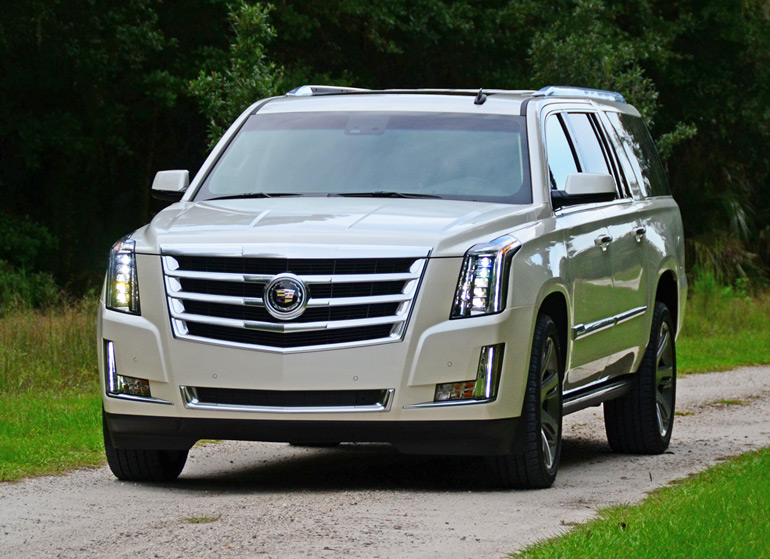 Looking at the imperfect economical side through a lightly-powered magnifying glass, the new Cadillac Escalade ESV has a few tricks up its sleeves, by implementing cylinder deactivation allowing the V8 engine to run on only 4 cylinders when light load times permit. I found that the V4-mode enabled quite often on the highway yielding surprising fuel economy numbers hovering around 22 mpg. Around town I averaged about 15.4 mpg and a combined 16.3 mpg. That is slightly better than the EPA estimated 14 mpg city, 20 mpg highway and 16 mpg combined for the Escalade ESV. 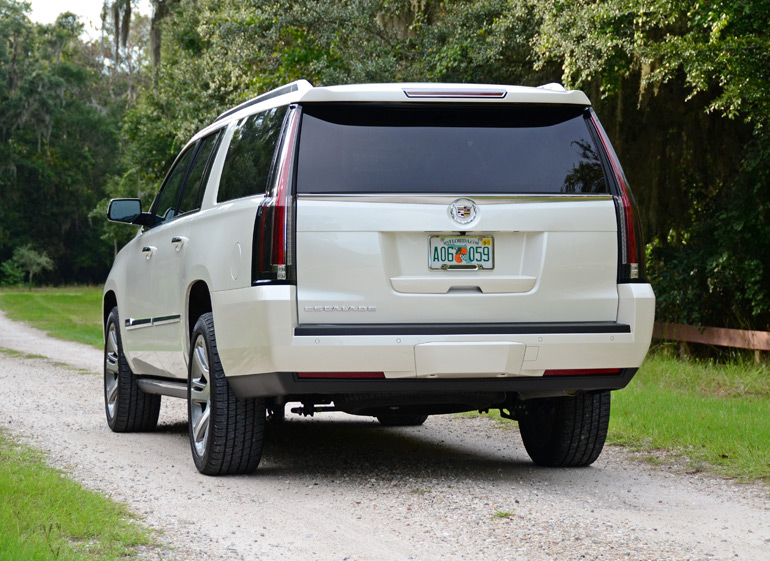 Keeping the massively proportioned Escalade ESV planted to the road pays thanks to its standard magnetic ride control, which utilizes the brands famous magnetic dampers with a touring and sport mode setting making millisecond adjustments to adapt to the pavement. The ride is amazing within itself as the Escalade ESV virtually flattens bumps in the road hardly ever losing its composure for any unwanted body motion or bounce. The truck underpinnings of the Escalade ESV tend to shine through the luxurious skin showing more rugged and stable traits causing a bit of unwanted body jiggle and shake going over bumps and rough terrain. This characteristic is probably the most disconcerting part of the all-new Escalade ESV, something that only few people will find fault with. Nevertheless, the body jiggle later becomes an expected part of the way the Escalade ESV rides, more of a reassurance of its ruggedness for some.

Leaning into the driving nature of the 2015 Cadillac Escalade ESV is nearly intimidating for some due to its size. Some will hesitate at the idea of driving something so huge. Despite the initial intimidations, the new Escalade ESV is easy to drive. The steering effort is easy enough at low speeds thanks to its electric assist, but not overly boosted to the point of loosing the little bit of communication that it gives back to the driver from the road at speed. For the most part, the steering remains to be numb to the road but beneficial for easily maneuvering the mammoth-proportioned SUV into tight spaces. In such circumstances, the Escalade ESV can be challenging to park, which is where the Driver Assist Package, Driver Awareness Package and rearview camera all come to the rescue. The combinations of these packages incorporate parking sensors and automatic braking in the event that the system detects the vehicle backing or moving forward into an object. The system works well, as I found out in parking near a curb out back, the system automatically slammed on the brakes as it thought there was an object in the way. All before enabling the brakes, the system will notify you through vibrations in the driver’s seat. The same vibrations in the drivers set take place for other functions, such as lane departure and forward collision warning. Additionally, cross path detection works in the same convenient and potential life-saving way for backing out of parking spaces. Such system integration is almost a necessity for the Escalade ESV. 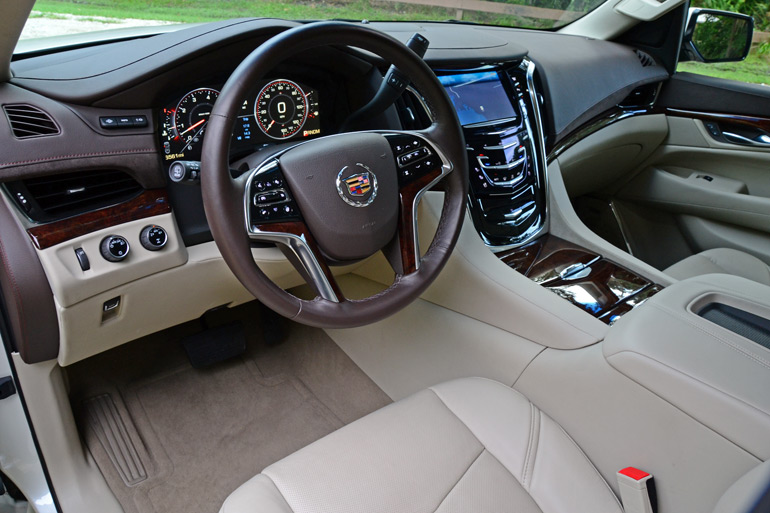 The cabin of the all-new 2015 Cadillac Escalade ESV is more of a short-stay vacation destination rather than the expected commonplace interior of a big SUV. There is really no shortage of space as all rows appoint virtually any size adult. The perforated leather seating up front, heated and ventilated, are comfortable for long trips and have just enough bolstering to keep you in place during light lateral movements. The 2nd row’s standard captain’s chairs give two passengers the feeling of authority, positioned in a spot to view the road or recline to watch a movie playing in one of the two roof-mounted Blu-ray player LCD screens. Out back, the 3rd row seating only diminishes leg room slightly compared to the 2nd row. As an option, the new Escalade ESV can be configured for 8-passenger seating by way of the 2nd row getting a bench seat in place of the two captain’s chairs. 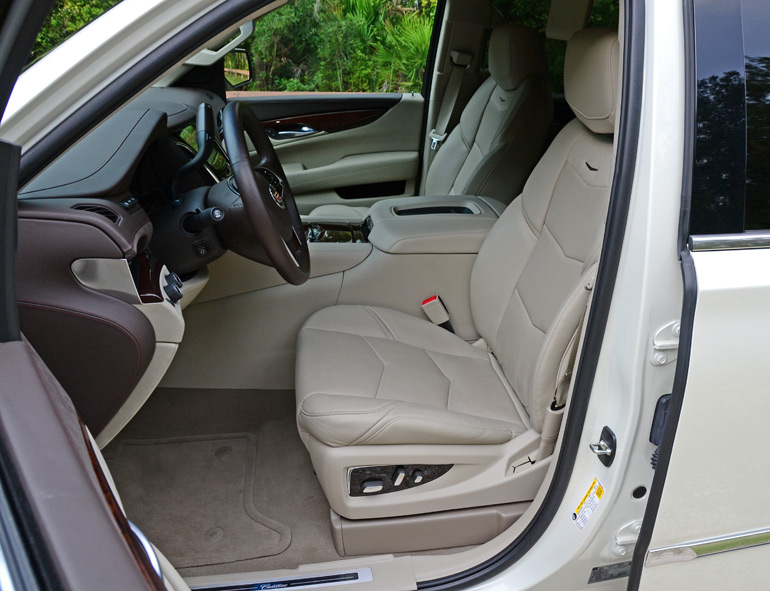 Rear passengers benefit from 2nd row climate controls, roof vents and the rear-seat entertainment system with two LCD screens as part of my test vehicle’s Premium trim level. To access additional cargo space outside of the impressive 39.3 cubic feet with all seats in place, the 3rd row seats fold flat into the floor at the touch of a button while the 2nd row flips forward through another set of power buttons. With the seats folded, cargo space vastly opens up to over 120 cubic feet, something I took advantage of to pick up planks of tile and hard-wood flooring for an over-due home project I have been planning. 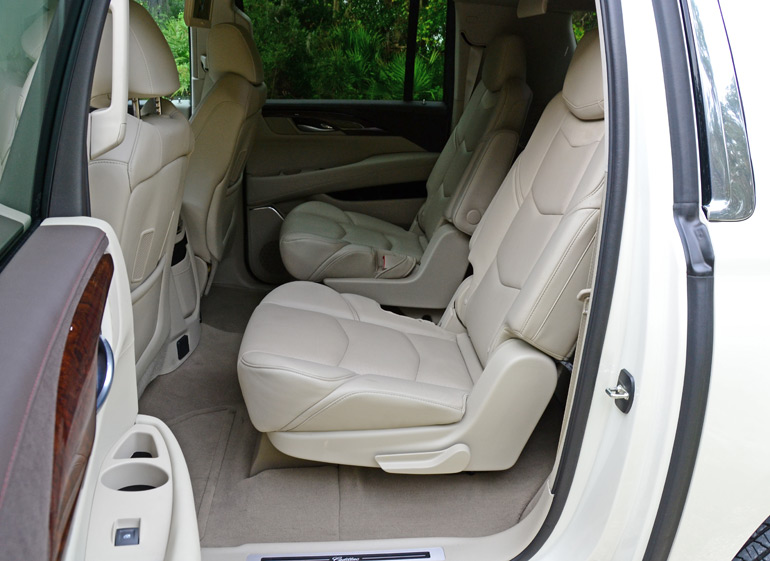 Technology has taken a front seat to tie together the all-new Escalade ESV’s luxurious stature to remain fresh in today’s uber tech-connected world. The CUE system (Cadillac User Experience) nicely integrates vehicle controls and functions through a touch-screen interface. The system is a bit cumbersome at times, mainly due to the slow response controls and capacitive buttons on the dash that sometimes seem to have a mind of their own. In the full spectrum of the system, it is easy to see what Cadillac is attempting to go for, foreshadowing products like the Apple iPad to bring an easy-to-use and familiar control system to consumers. It works well at times, but could still use some polishing, just no more polishing for the glossy fingerprint-collecting screen. 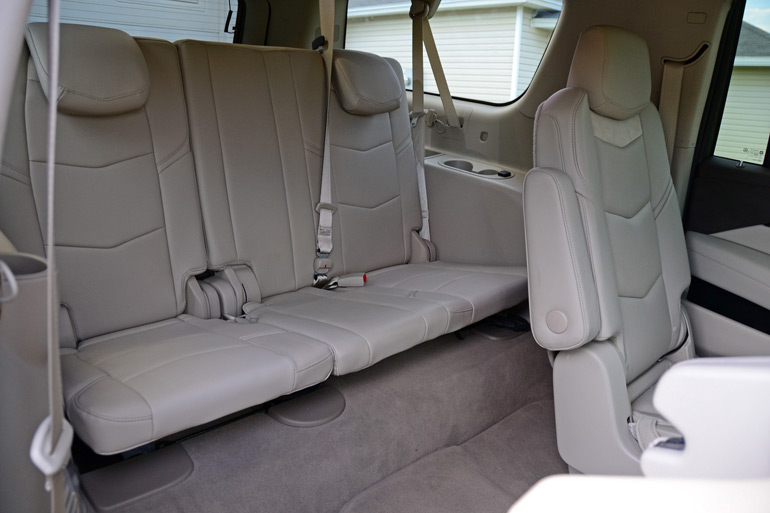 The all-new 2015 Cadillac Escalade ESV is more of a lone soldier in a vast army of SUVs and crossovers that really don’t compare to what the Escalade offers in terms of its size wrapped up in a truly luxurious package. The new styling of the Escalade sets it apart from the crowd in an unmistakable fashion. Up front of the exterior you find a vertical array of lenses for the LED headlights and brand-signature LED running lights. Out back are even longer vertical-running LED tail lights nicely accented by amber LED turn signals and the body molding to sharply end its box-shape sculpted lines. It all comes together well visually. Adding ease of accessibility are power-folding running boards that quickly unfold to greet you as you open any door. The power tailgate has an opening glass panel for those rare times you have something to transport that happens to be nearly as long as a football field. In that same area, the rear wiper is now hidden under the spoiler area of the tailgate. Tow rating for the Escalade ESV, when properly equipped, is rated up to 8,000 pounds. 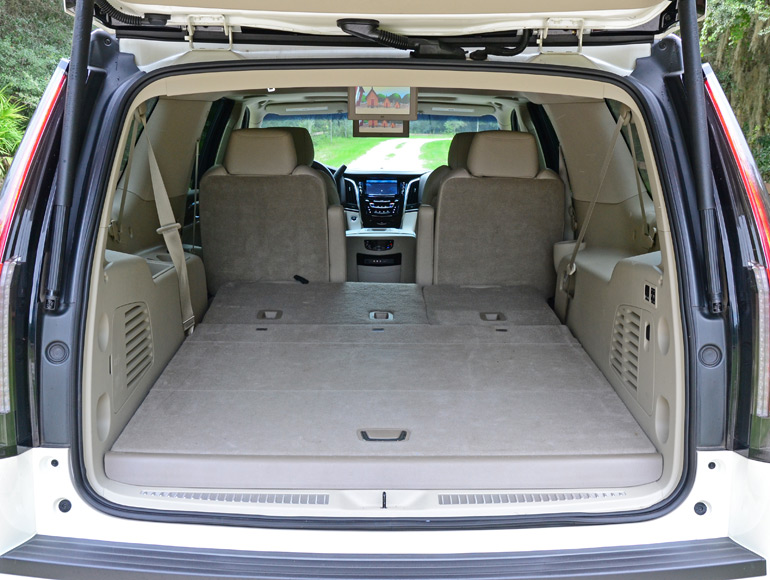 The Cadillac Escalade has always been a staple for signifying prestige. The all-new 2015 Escalade ESV is nothing short of that and its dominance has progressed even further permitting a higher price. Playing the game with one of the largest luxury SUVs you can buy will require that you pay your fair share. Having said that, it comes as to no surprise that bringing home the loaded-to-the-max 2015 Cadillac Escalade ESV Premium 4WD means leaving $89,890, including a $995 destination charge, at the dealer.