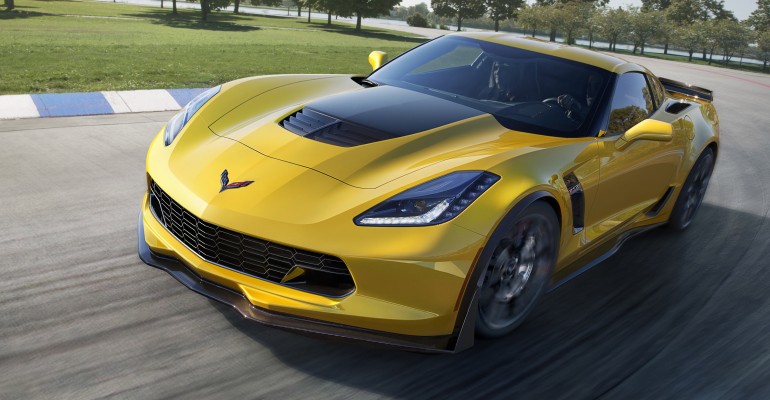 To say that the Automotive Addicts team is impressed with the seventh generation Corvette Stingray would be an understatement. Everything about the C7 Vette makes us want to scream from the rooftops “America.” With the Z06 posting numbers that are normally reserved for cars costing well over $100k, it is going to take a few days for us to decide if we should start selling off all of our personal possessions now or start buying lotto tickets in hopes of managing the necessary $83,995 to get one in the driveway.

Chevy’s new 8-speed automatic seems to be the final ingredient in the Stingray’s recipe book to transform the new Vette from an amazingly quick athlete into a bonafide super hero, streaking from 0 to 60 in a “blink twice if you can hear me” 2.95 seconds and finishing the quarter-mile a brief eight seconds later (10.95 seconds total for the 1/4 mile…seriously? Yes).

Check out Chevrolet’s full press release while I decide which one of my guitars to list on Ebay first:

DETROIT – The performance of the all-new, 2015 Chevrolet Corvette Z06 establishes it as one of the most capable vehicles on the market – and one of the few to achieve sub-3-second 0-60 performance and a sub-11-second quarter-mile time.

“The Corvette has long been known as America’s sports car,” said Mark Reuss, General Motors’ executive vice president, Global Product Development. “With the capability of the new Z06 rivaling the best performance cars in the world, we will also be America’s Supercar.”

The Corvette Z06 accelerates from a rest to 60 mph in only 2.95 seconds when equipped with the all-new, available eight-speed paddle-shift automatic transmission – and achieves it in 3.2 seconds with the standard seven-speed manual transmission.

The new Z06 is also the fastest production car ever tested at GM’s 2.9-mile Milford Road Course, beating the record set by the Corvette ZR1 by a full second.

All test results were achieved with Z06 coupes fitted with the Z07 Performance package, which adds Brembo carbon ceramic brake rotors and Michelin Pilot Sport Cup 2 tires. The Z07 package also features the most aggressive aerodynamic package available on the Corvette Z06, which delivers the most downforce of any production car GM has ever tested.

“The defining aspect of driving the Z06 is seamless integration of power, technology and aerodynamics,” said Tadge Juechter, Corvette chief engineer. “As a result, the Z06 delivers ferocious acceleration, tenacious handling, and high-speed stability that few cars can match.”

It is the first Corvette Z06 with a supercharged engine – SAE certified at 650 horsepower and 650 lb-ft of torque – and the first with an available eight-speed paddle-shift automatic transmission. Performance-enhancing Magnetic Ride Control and Performance Traction Management are standard, and the award-winning, industry-first Performance Data Recorder is available.