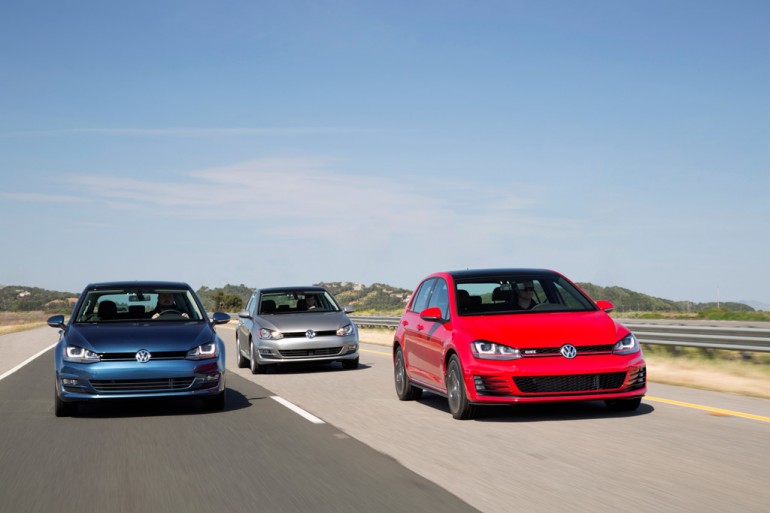 What Motor Trend is dubbing as the Jack of all trades, has won the over to choose the new Volkswagen Golf as the 2015 Motor Trend Car Of The Year.

It was back in 1985 when the VW Golf claimed its title for Motor Trend Car Of The Year and now, almost 30 years later it has risen to fame once again. The new 2015 VW Golf has been more of a background sleeper but with its multi-level trim offerings and abundant engine portfolio, it begs to appease a wide range of consumers and even picky enthusiasts.

“VW floored our judges by reimagining the seventh generation Golf for nearly every need and want,” said Motor Trend Editor-in-Chief Ed Loh. “From the value-laden Golf 1.8T and high-MPG Golf TDI to the legendary hot hatch GTI and all-electric e-Golf, there truly is a Golf for everyone.”

The 2015 Motor Trend Car of the Year award was presented to Michael Horn, President and CEO, Volkswagen of America, during an announcement Thursday morning.

“Volkswagen is extremely proud to receive this prestigious award,” said Horn. “This recognition from Motor Trend is a testament to the versatility of the Golf family and the quality and value these cars offer in the compact hatchback segment.”

Motor Trend’s Car of the Year program is open to any all-new or substantially upgraded 2015 automobile. Rather than being compared against one another, contending vehicles are first put through Motor Trend’s full battery of performance tests to measure acceleration, braking, and limit handling.

All contenders are then evaluated on three separate courses at a professional automotive test center before finalists are selected. Out of 23 contending 2015 models, Motor Trend’s judges picked 10 Car of the Year finalists, including the Volkswagen Golf. The other finalists were:

Each finalist is then driven on a real-world road loop that provides a range of surfaces and traffic conditions to evaluate ride and handling, engine and transmission smoothness and responsiveness, wind and road noise, and ergonomics. In the final phase of Car of the Year,Motor Trend judges debate and evaluate each vehicle against the award’s six key criteria:

Safety—a vehicle’s ability to help the driver avoid a crash, as well as the secondary safety measures that protect its occupants from harm during a crash.

Value—competitive price and equipment levels, measured against those of vehicles in the same market segment.

Performance of Intended Function—how well the vehicle does the job its planners, designers, and engineers intended it to do.

After 9 full days of testing, driving and deliberating, Motor Trend selected the Volkswagen Golf as represented by four powertrain derivatives as its 2015 Car of the Year. The seventh-generation version of Volkswagen’s best-selling model is bigger, lighter, more fuel-efficient, and even more versatile than the previous Golf model.

Based on the new Modular Transverse Matrix (MQB) architecture, the German-engineered 2015 Golf family is currently available in four different versions: fun-to-drive Golf 1.8T, frugal Golf TDI Clean Diesel, sporty Golf GTI and the all-electric, zero-tailpipe emissions e-Golf. With a host of newly available driver assistance features and excellent EPA estimated highway fuel economy, the all-new Golf is a standout in the compact class. Reinforcing this, the lineup will be rounded out in early 2015 with the all-new 292-horsepower, all-wheel-drive Golf R and the Golf SportWagen range.

With a starting price of $17,995 (plus $820 destination and handling) for the 2-door Golf S model, the 2015 Golf family offers advances in interior refinement, exterior styling, and a wealth of new equipment at even the lowest trim lines; the result is truly a Golf for everyone.

For more information about the award, judging process, and the contenders, check out the January 2015 issue of Motor Trend, visit www.motortrend.com and search the hashtags #MTCOTY, #VW and #Ready.Set.Golf on Twitter, Instagram and Facebook.

About Volkswagen of America, Inc.
Founded in 1955, Volkswagen of America, Inc., an operating unit of Volkswagen Group of America, Inc. (VWoA) is headquartered in Herndon, Virginia. It is a subsidiary of Volkswagen AG, headquartered in Wolfsburg, Germany. VWoA’s operations in the United States include research and development, parts and vehicle processing, parts distribution centers, sales, marketing and service offices, financial service centers, and its state-of-the-art manufacturing facility in Chattanooga, Tennessee. The Volkswagen Group is one of the world’s largest producers of passenger cars and Europe’s largest automaker. VWoA sells the Beetle, Beetle Convertible, Eos, Golf, GTI, Jetta, Jetta SportWagen, Passat, CC, Tiguan, and Touareg vehicles through approximately 649 independent U.S. dealers.