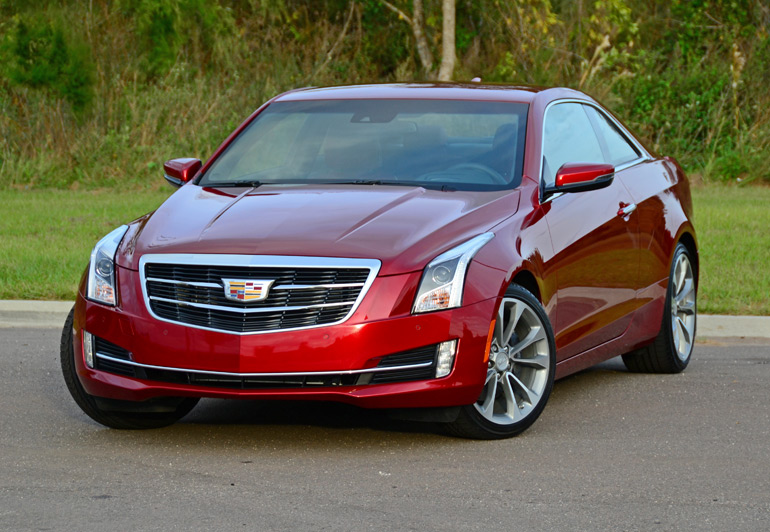 I always thought I had to be just the right age to drive a Cadillac, maybe in the scope of 55 to 70 years old. Something as simple as seeing my older uncle at the age of 65 proudly drive his Cadillac around town instilled that image into my mind, which has stuck with me through my 30s. With the opportunities I have now, to drive a different new vehicle each week, the chances of a Cadillac gracing my driveway are pretty high so I had better rethink my outlook. As such, the all-new 2015 Cadillac ATS Coupe 2.0T has greeted me with open arms and with each instance of strapping myself behind the wheel I grow fonder of what the brand has done to gain the attention of someone at my age. 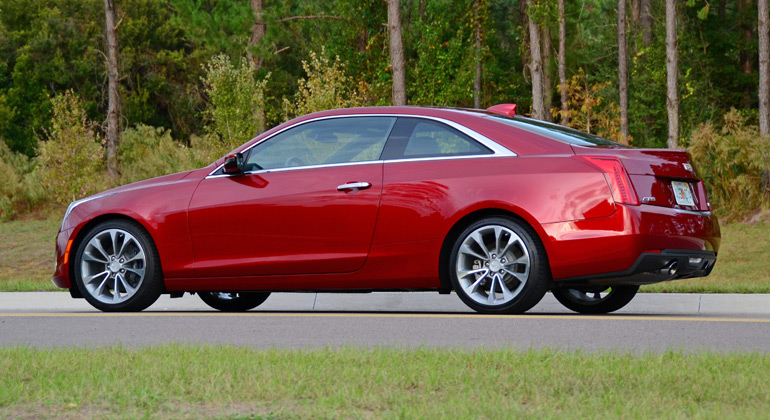 The new 2015 Cadillac ATS Coupe is a new vehicle to the lineup, taking the ATS sedan’s formula and redesigning most of the sheet metal in delightful proportions sans two doors for a good looking luxury sports coupe. The new ATS Coupe, taking its own approach to design mostly apart from the ATS sedan’s dimensions, brings a good look and a well-adapted driving quality that sits well with enthusiasts and those who seek a luxurious sports coupe – at any legal driving age. 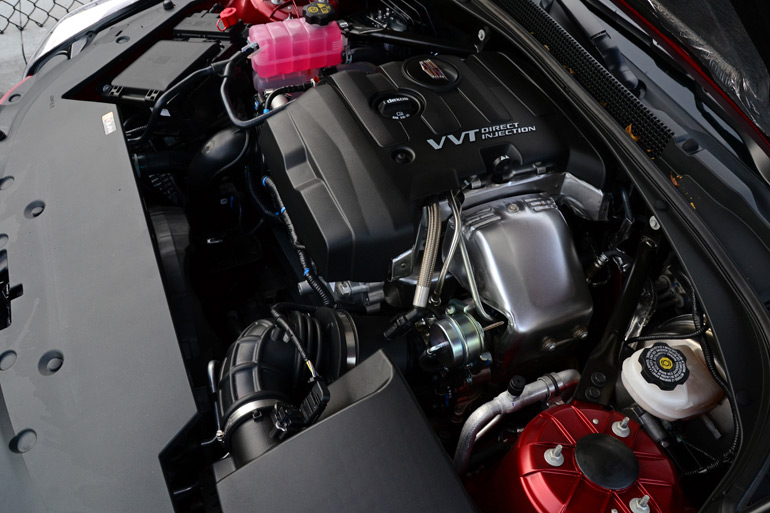 The new 2015 ATS Coupe has a choice of two engines, a new 272-horsepower 2.0-liter 4-cylinder turbocharged unit, redesigned from last year’s ATS sedan’s turbo 4. Now, the engine offers 295 lb-ft of torque, a bit more torque than the old 4-cylinder turbo’s 260 lb-ft and the 3.6-liter V6 with 321 horsepower and 275 lb-ft of torque. Each powerplant is mated to a 6-speed automatic transmission or you can have the 2.0-turbo with a 6-speed manual gearbox, both of which send power to the rear wheels or an optional all-wheel-drive system which is, unfortunately, coupled with the automatic transmission only. 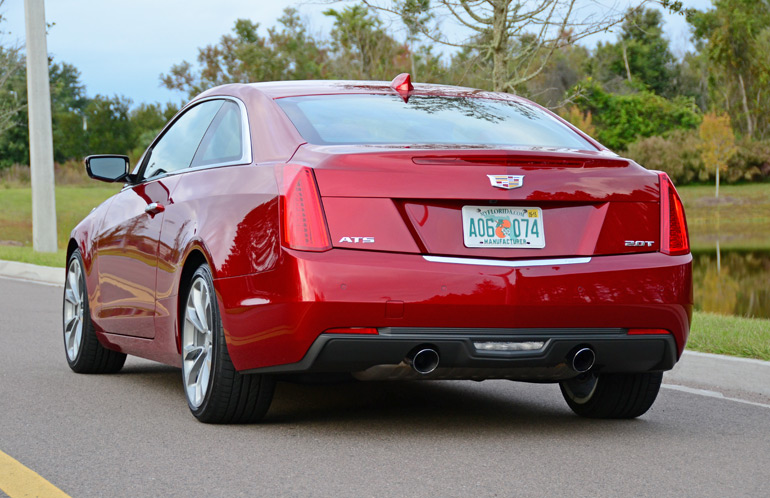 Cadillac’s forward-thinking in engineering really shines through the drivetrain and chassis of the new 2015 ATS Coupe. Much about its design and architecture pays homage to the long chase Cadillac has had to endure to catch the Germans, mostly gunning for the BMW 3 Series and now their new 4 Series coupes. I can now say, with certainty, that there is a photo finish brewing in this race between Cadillac and the ATS Coupe’s competitors.

My 2015 Cadillac ATS 2.0 Turbo test vehicle equipped with the 6-speed automatic transmission is a joy to drive. The turbo spools up fast enough from a stop to reduce turbo lag, getting things moving rather quickly. The surge and thrust of the engine at its peak torque rpm range comes on to nearly unseat the rear wheels through first gear. Up through redline the engine never gives out or acts as if it has run its course as you may find in some similarly-displaced 4-cylinder turbo mills. Even though the power band of the 2.0-turbo 4-cylinder engine is somewhat narrow, it kicks in where it counts and surges through each forward cog of the 6-speed auto transmission. With the help of direct injection and the displacement size of the 4-cylinder turbo engine, fuel economy is respectable with an EPA estimated 21 mpg city and 30 mpg highway. On a rather long trip from Jacksonville, FL to Miami I averaged about 29.6 mpg, nearly matching the EPA estimate. Of course I tended to run a few notches over the posted interstate speed limit at times. 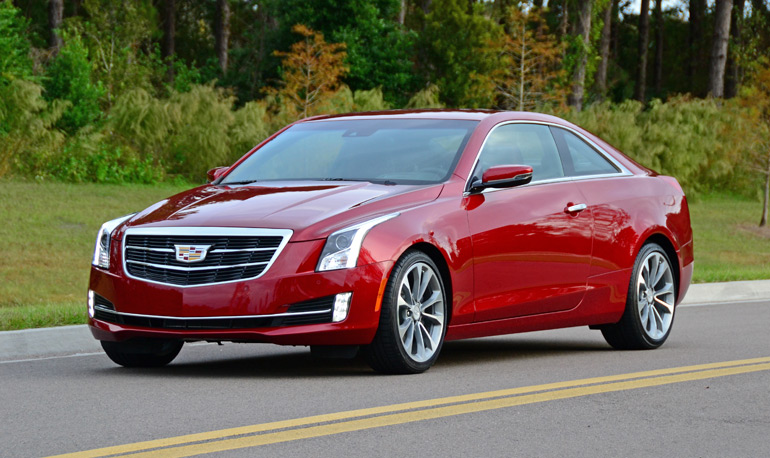 The driving and performance dynamic of the new Cadillac ATS Coupe 2.0 Turbo comes with many hidden surprises, mostly good ones. The balance of the chassis is remarkable with a nearly 50/50 front-rear weight distribution and a total of 3,411 pounds to tote around. Attesting to the balance, popping the aluminum hood reveals the engine’s front drive belts and pullies nearly coming in line with the strut towers, further proving Cadillac’s extra thought-in-process for balancing the ATS Coupe’s chassis with the engine being pushed far back towards the firewall. The short front fender overhang gives away the ATS coupe’s unique proportions and near-perfect front-rear balance. Being an inch shorter, over an inch wider and slightly lower than the ATS sedan, the ATS Coupe is a better-suited vehicle for handling and track duties. Bringing things down from speed is at the task of Brembo brakes up front. 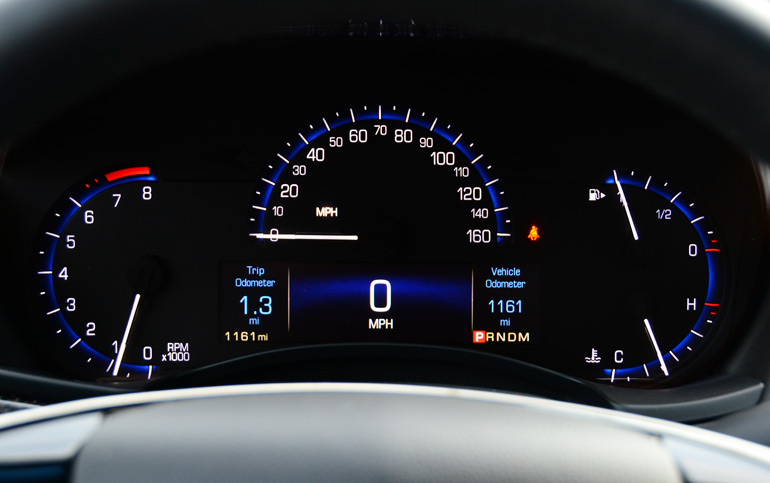 Acceleration from a standstill to 60 mph comes in at 5.4 seconds. Taking to the lateral performance side of things, the ATS Coupe 2.0 Turbo handles itself well through bends and turns. The ZF-sourced electric steering rack is up to the task of a high-speed ratio at low vehicle speeds while emitting a firm feeling at higher vehicle speeds to give the driver some assurance even though it lacks much feedback from the road. With the aid of the optional magnetic ride control, incorporating General Motor’s highly-sought-after adaptive magnetic dampers (magnetorheoligical shocks), the ride quality and sporty character traits are dialed in as to avoid diminishing either. The body roll and pushing weight, mostly kept to a minimum through hard turns, is hardly ever upset with subtle bumps or uneven surfaces. The optional mechanical limited slip differential out back aids to the ATS Coupe 2.0 Turbo’s ability to power out of turns without any unwanted surprises for those who find joy in burning up the 255/35 18-inch run-flat summer tires out back. I found this to be a little extra assurance when powering out of turns on an enclosed parking area putting the ATS coupe to the test, all while traction control and stability control were disabled. I don’t think my older Uncle ever did anything like this with his Caddy. 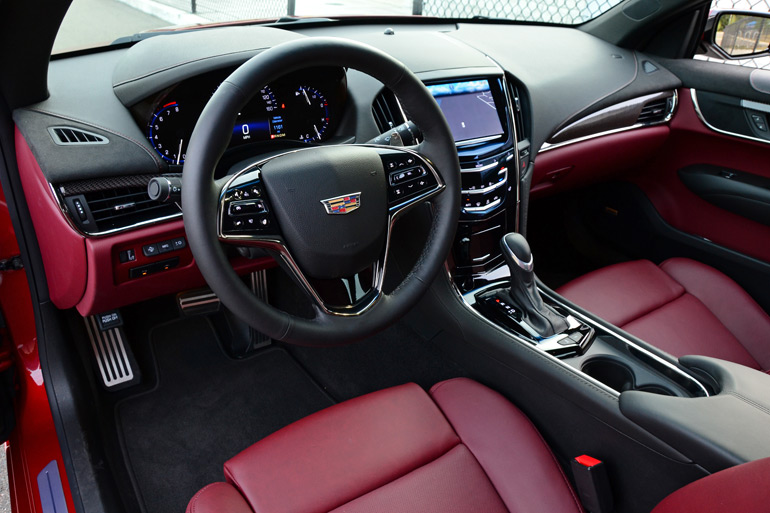 The interior of the new 2015 Cadillac ATS Coupe in the Premium trim places the driver and passengers in a serene and luxurious cockpit. The Morello-Red leather heated seats up front look better than they feel, as they could probably use a bit more padding and bolstering. I found the seats to reach their limit of comfort about 3 hours into my trip to Miami, FL. Many of the interior dashboard materials used are true to their high-quality perception with nicely-accented stitching throughout, many soft-touch surfaces, alcantara trim inserts, carbon fiber trim with matching red accents, and piano black reserved for the center console stack housing the controversial CUE (Cadillac User Experience) infotainment system. The CUE system has its usual annoyances of slow load and response times. However, the CUE may suit some folks just fine after becoming accustomed to its few shortcomings and fingerprint-collecting glossy screen. The beefy leather-wrapped heated steering wheel fits well in my hands and the steering wheel-mounted magnesium shift paddles are up to the task of performing rev-matched downshifts and timed upshifts. I will say, using the shift paddles for up-shifts in manual mode does take an extra split second or two to register in some instances. Probably why I allowed the adaptive transmission control unit manage shift points, which quickly adapted to my driving styles by holding gears longer and downshifting early when it detected spirited driving. 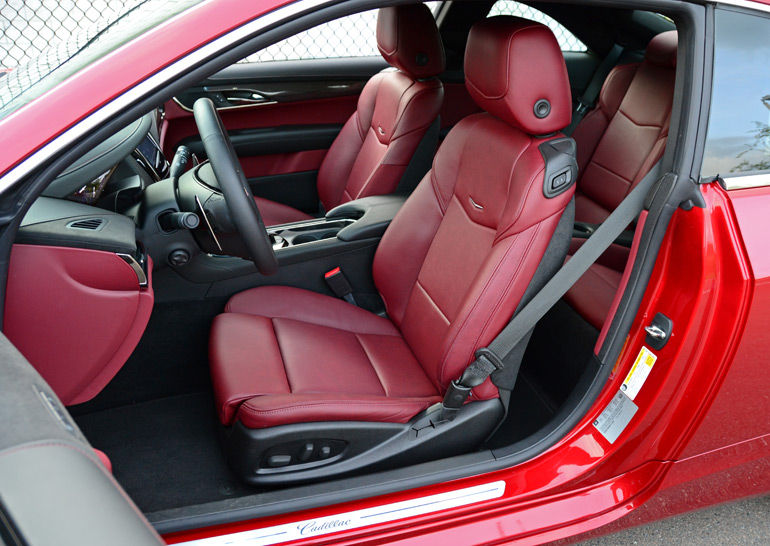 Perpetuating Cadillac’s signature styling, apart from its newly-designed crest emblem, the new Cadillac ATS Coupe shadows its bigger brethren to signify that unmistakable exterior look. The front Intellibeam (adaptive) HID headlights and LED running lights flowing vertically on each end mimic the aesthetics of the new CTS and Ciel concept car. The side and pillar sections flow in a fashion unique to the ATS coupe as does the rear truck lid with an integrated brake lamp. The rear diffuser encases dual exhausts and a single reverse lamp, all appealing to that familiar Cadillac pointed-tear design. 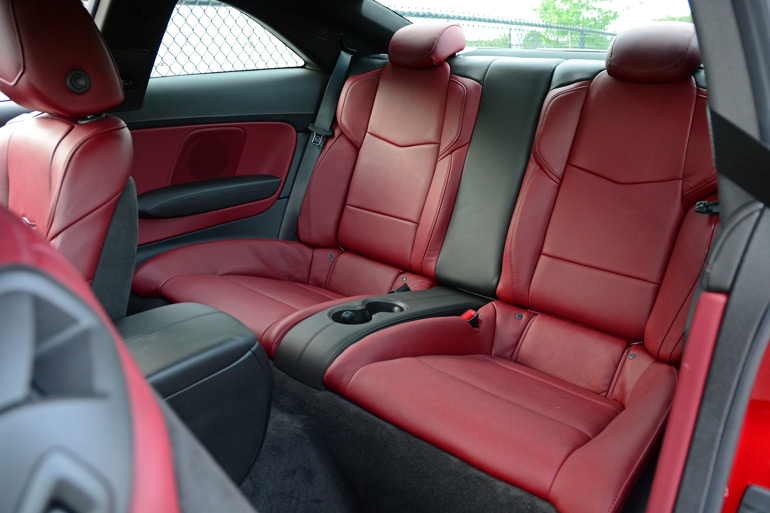 The standard Driver Awareness package on my test vehicle includes intellibeam headlights (adaptive headlights that turn at angle of steering) and a lane keep assist system that takes a while to get accustomed to. The lane keep assist system in the new ATS Coupe is rather intrusive by way of it tugging the steering wheel in the opposite direction if you start to leave your lane without signaling. I found it to be a bit too passive to alert me on occasion and almost to the point of being overbearing to jolt the car to the opposite side of the lane when it did detect the vehicle about to cross the painted lines in the road.

Loaded up at the Premium trim level, my 2015 Cadillac ATS Coupe 2.0 Turbo tips in an as-tested price at $50,380, which is nearly fully-loaded only leaving room for the all-wheel-drive system and the Driver Assist package with adaptive cruise control, blind-spot monitoring, and collision mitigation with brake assist. All of the other tech goodies, such as Bluetooth connectivity with streaming audio, USB connectivity, cellphone wireless charging via a Powermat inside of the dashboard motorized storage compartment, 4G LTE OnStar connectivity, rain-sensing wipers, and color multi-information heads-up display, were equipped on my test vehicle.