Forza Motorsport 3: The Race Is On 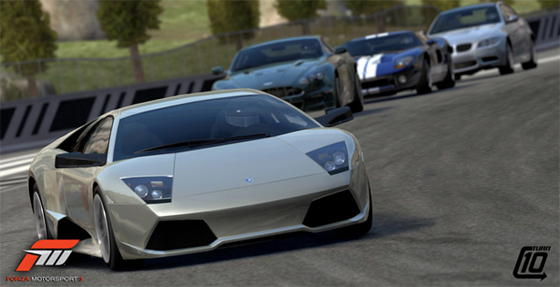 The race is literally ON! A new preview of Gran Turismo 5 for the PS3 was introduced just recently and now Forza Motorsport 3 for the Xbox 360 has injected the market with some serious car-porn-in-motion with new images and a video trailer.

From a reasonable distance, the preview images from Forza Motorsport 3 actually look like “real” cars and not a “video game”.  Developer, Turn 10, has set out to turn gamers into car lovers and car lovers into gamers. But maybe the developers have made something that is too “real” and gamers just won’t have it by resorting to arcade style games. Maybe it is the “realness” that will bring the car enthusiasts to the video game world. You will never know until one of the best racing games hits the market.

Forza Motorsport 3, with its 400 cars from 50 manufacturers, 100 tracks and High-Def (HD) at 60 frames per second, it is a major contender for PlayStation’s Polyphony Digital developed Gran Turismo 5. The battle is seriously on and we want to be there when game and car lovers pick their favorite.

Clean! That’s what Forza Motorsport 3 is all about. Check out the images and video below and I am sure you will agree. Oh, tell Polyphony Digital (Gran Turismo 5 developers) that they have met their match!