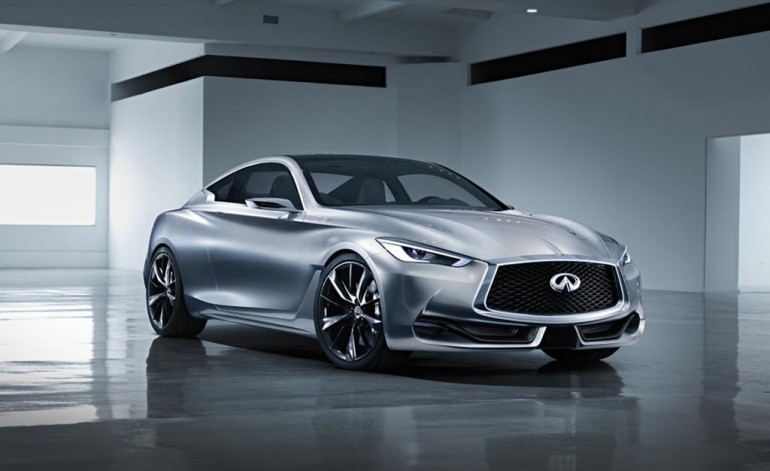 Infiniti is still striving to communicate its newfound identity. With several new models on the horizon, the Q60 is about to get its long-overdue revamp in a direction we see with this all new Q60 Concept, which is to debut next week in Detroit at the 2015 North American International Auto Show.

As we expect, the new Q60, the next generation of our beloved but name-torn G37 Coupe, will get the Q50’s 3.7-liter V6 engine with many other similar gizmos and underpinnings molded into a true luxury sports coupe stature.

Now all we need is the GT-R engine under that hood to pit an Infiniti supercar a-la Q50 Eau Rouge. We can always dream can’t we?

Check back next week for coverage on the Infiniti Q60 Concept from Detroit.

Muscular lines are revealed in the silhouette of the Q60 Concept: pure, well-defined contours, making the concept’s intentions easy to understand at first glance.

Overall proportions and full-sized wheels placed out at the corners of Q60 Concept make an unmistakable design statement and add to the exhilaration of the performance coupe. This latest concept builds upon the design language seen on recent Infiniti concept cars, foreshadowing the strong visual consistency to be a key ingredient of products in the future Infiniti lineup.

About Infiniti
Infiniti Motor Company Ltd. is headquartered in Hong Kong with sales operations in over 50 countries. The Infiniti brand was launched in 1989. Its range of premium automobiles is currently built in manufacturing facilities in Japan, the United States and China. Production in the UK will start in 2015, bringing with it significant expansion of the brand’s portfolio. Infiniti plans to also expand manufacturing into Mexico by 2017.

As the Title Partner and Vehicle Performance Partner of Infiniti Red Bull Racing, Infiniti has a far-reaching technical collaboration with the four-time FIA Formula One World Championship winning Team.