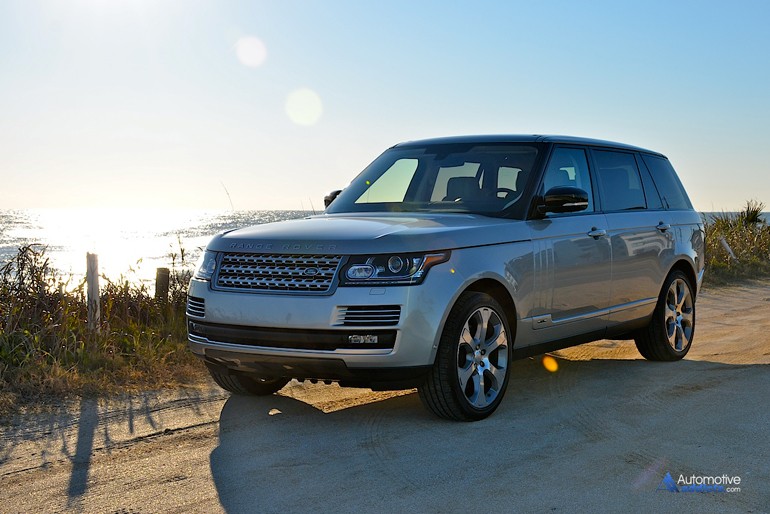 In my years of reviewing vehicles it is only natural for the many sports cars, exotics, and plush luxury cars to stand out in ways to foreshadow the basis of my expressional positive tones. Continuing on that basic principle, this week I had the delightful opportunity to experience the opulent luxury of the new 2015 Range Rover Autobiography Long Wheelbase. The luxury statement that Land Rover has reshaped in their newly designed Range Rover only begins to tell a story of living in excess, but excess that I can get used to in the go-anywhere nature of the Autobiography Long Wheelbase trimmed test vehicle in my possession. 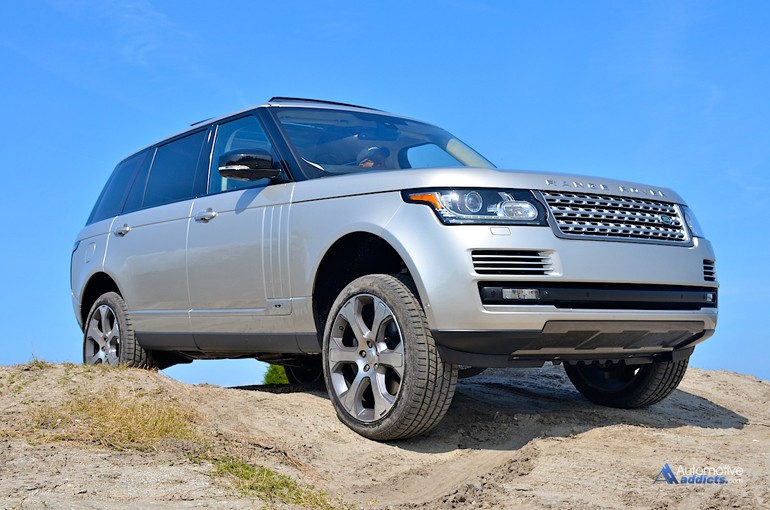 Year after year, Land Rover builds their vehicles with a few defined purposes setting them apart from halfway attempts from other automakers. You know the type, those that indulge in appeasing consumers who want nothing more than a crossover utility vehicle exclusively built for paved roads. Of course, you can’t get away from the fact that no fewer than 10% of Range Rover owners will ever take their capable SUV along the off-roading path. Still, that doesn’t stop Land Rover from making each of their vehicles among the most capable off-roaders offered in the current market, including the latest 2015 Range Rover Autobiography LWB with all of its lavish luxury appointments. 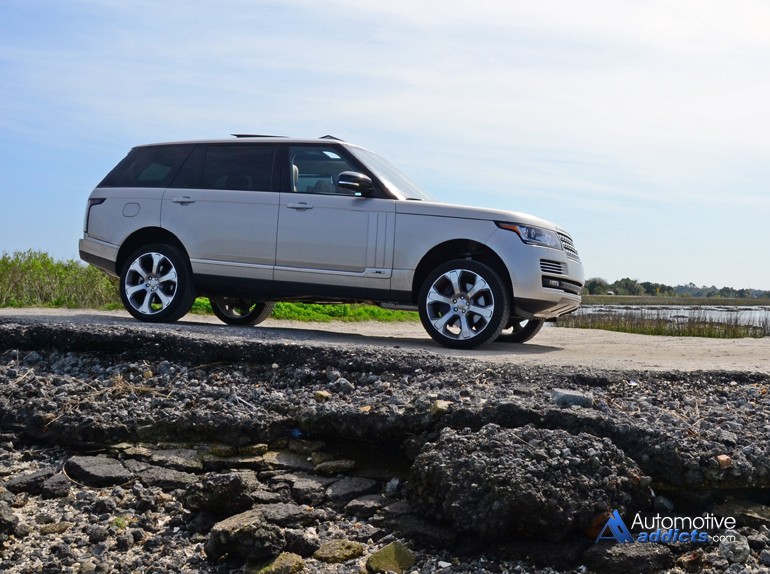 Receiving a major update and redesign for the 2013 model year, Land Rover put the Range Rover on major diet, shedding nearly 700 pounds thanks to its all-new aluminum design and architecture. Land Rover has managed to place the new Range Rover in a position that retains its devout off-roading capabilities and rigidity, yet lighten up the load for better on-road performance and room for additional creature comforts. 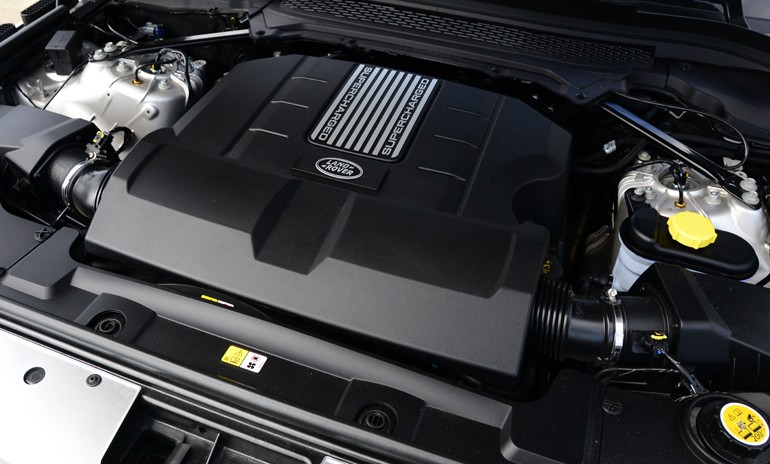 Powered by a 5-liter supercharged V8 engine making 510 horsepower and 461 lb-ft of torque, the 5,300-pound and 204-inch long Range Rover LWB is a road and land warrior. Putting its versatile chassis to work on and off road is the duty of the supercharged V8 mated to a new ZF-sourced 8-speed automatic transmission directing power through electronically controlled differentials to power all four wheels. In true Land Rover fashion, the new Range Rover features the latest Terrain Response II system with multiple surface selections including an automatic mode to allow the computer to sort things out when wheel slippage is detected. 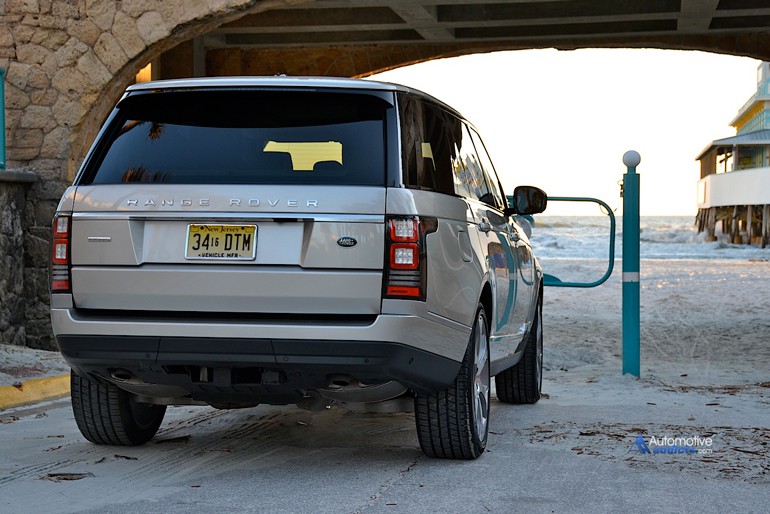 Getting the Range Rover LWB up to speed is no object as the 510-horsepower supercharged V8 has a wide power band getting the posh land conqueror up to 60 mph in just over 5 seconds. The thrust of the supercharged power comes on strong from the start and fills the band without any gaps. The wheels remain planted even on wet and slippery road conditions where stability and traction control softly kick in to sap any little wheel spin that the permanent four-wheel-drive system may employ.

The ZF-sourced 8 speed automatic transmission, among the best in the business, shifts seamlessly from one cog to the next while the supercharged V8 does its duty along side of the terrain management system to keep the momentum moving in the right direction on and off road. Of course, this type of performance will require copious amounts of premium fuel. I could only muster out 300 miles or so from a full tank. I seldomly hit the 19 mpg EPA estimate for highway mileage. 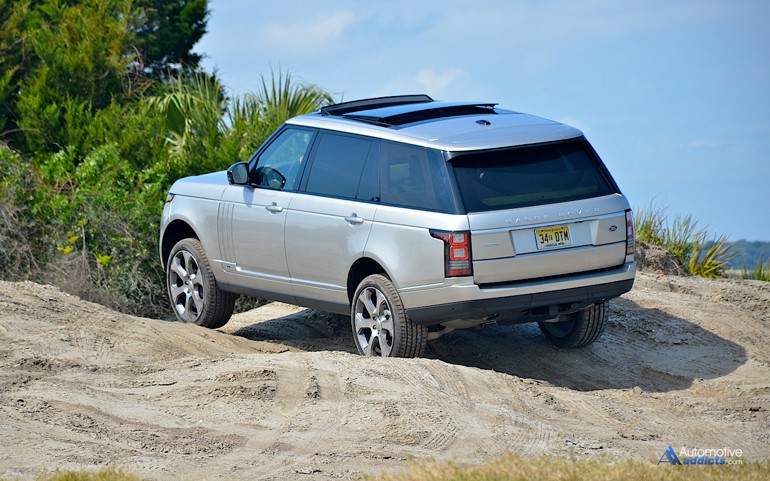 Around town and deep into the downtown Jacksonville, FL streets I saw a steady 15.4 mpg thanks to the start-stop technology, slightly beating the EPA estimated 14 mpg city figure. The engine would immobilize at stops while all accessories, including the air conditioner at an automatically-enabled lowered fan speed, remained on. Startup from stops was surprisingly quick preventing any delay to get moving again. 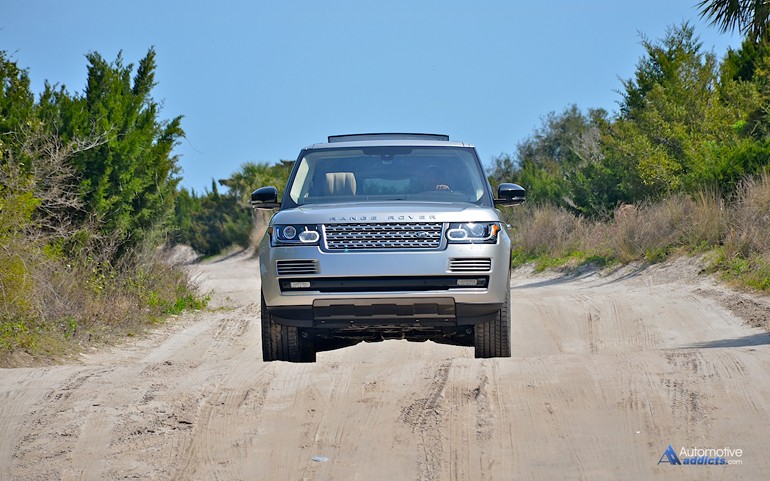 On road performance proves to be a welcomed trait of the large Range Rover LWB. It drives like a vehicle that is proportioned much smaller. However, there is no getting around the shear size of the Range Rover LWB as it feels there is some substantial substances rolling on the Autobiography LWB packaged optional 22-inch diamond-turned-finished wheels. The massive wheels do their job by providing just enough bite on loose surfaces as to hardly ever tax the robust Terrain Management system. Moreover, the 22-inchers never diminish the ride quality as the adaptive air suspension system, coupled with load balancing and a dynamic response system, provide an always-smooth ride without much unwanted body roll or sponge effects over uneven surfaces. Even on quick turn-ins the suspension does its job to retain the Range Rover’s composure with manageable amounts of body roll. Overall, the Range Rover Autobiography LWB’s ride is supple, just like its plush interior.

The new Range Rover Autobiography LWB’s interior is more along the lines of a serene escape than something you would expect to shelter you in a vehicle capable of immersing itself in up to 3 feet of water in the suspension’s off-road height mode and come out smiling on the other end. With an exclusive 4-passenger setup, the Range Rover Autobiography LWB leaves no stone unturned for luxury appointments and amenities. 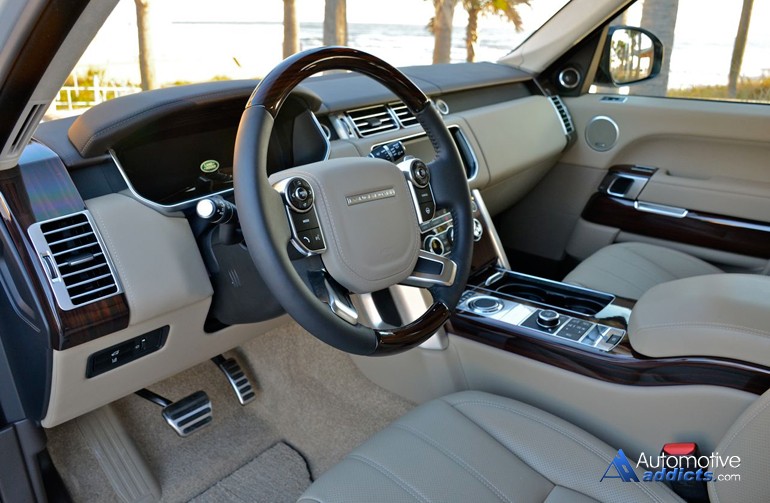 The cabin is laced in a soft-toned leather treatment accented by real wood, aluminum, a suede-cloth headliner, and four semi-aniline leather seats with 20-way power adjustments, a massage feature, heating, and ventilation. These features are an added appeal of the Range Rover all bundled up in my test vehicle’s Autobiography LWB package.

Also part of the package, you will find a rear seat entertainment system with two 10.2-inch rear screens. I have to say, allowing my daughter to view movies while driving is a whole new experience in the Range Rover Autobiography LWB as the Meridian 3D sound system glistens and thumps 1,700 watts of sound through 29 speakers. Thanks to the many active safety features, the theater-esque sounds didn’t bother me in knowing the Range Rover’s safety blanket was ready to prevent that phone call to the insurance agency. 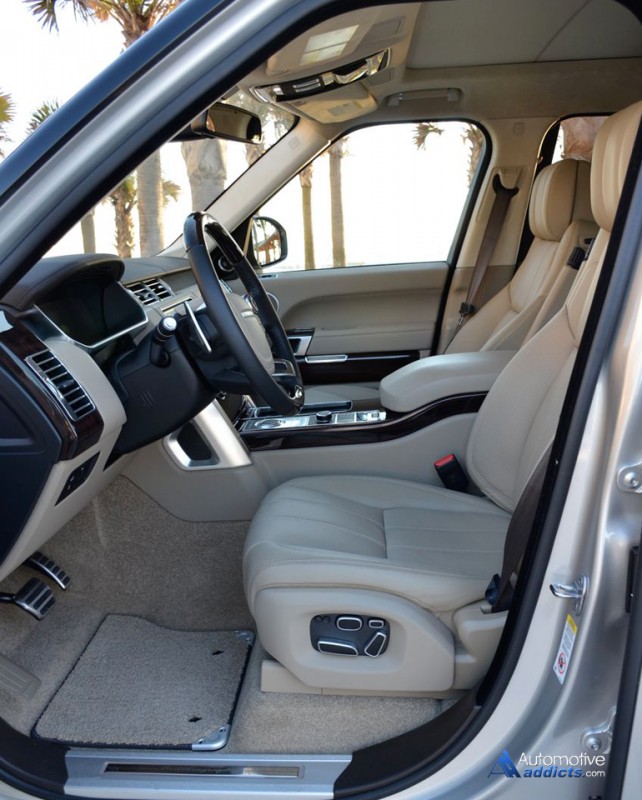 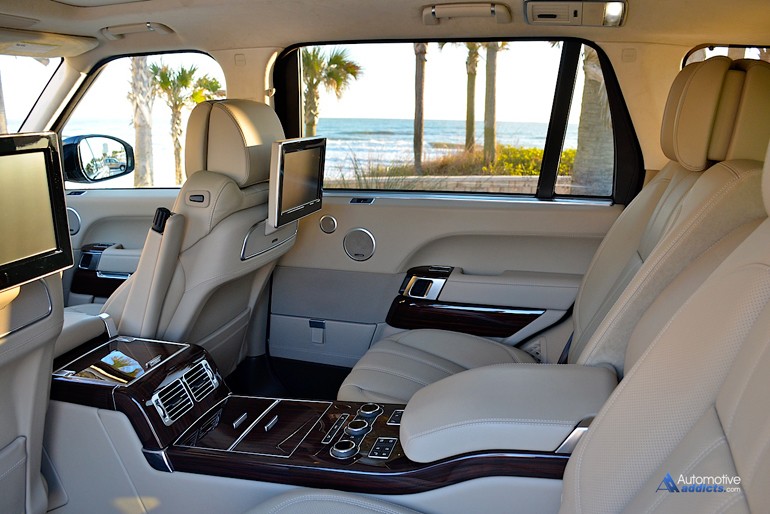 Undoubtedly, the new Range Rover Autobiography LWB is chock full of many useful creature comforts. The only take away is that some of the feature sets are cumbersome in their use due to a somewhat antiquated infotainment system that tends to lag with user inputs at times. Although the system has been updated to include a touch-screen panel on either side with dedicated functions, the on-screen controls of the climate system, audio system, navigation, DVD entertainment system, Bluetooth phone integration, outside cameras, and control of the 4 massage heated and cooled seats functions, the system is hindered by aged menus and unpredictable performance. Conversely, the system eventually becomes user-friendly and predictable after spending a few hours with it. 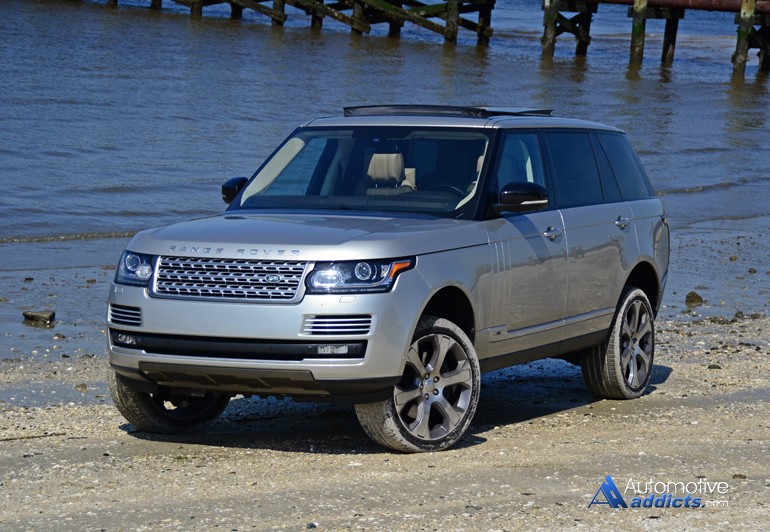 In the full spectrum of what the new Range Rover Autobiography LWB offers, it is among the most lavish SUVs you will find that has multiple personalities of conquering different terrain. The Range Rover Autobiography LWB nearly defies your expected sense of stability on the road considering its size, yet it provides the ultimate luxury appointments in its spacious 4-passenger cabin.

Living the lavish lifestyle that the Range Rover Autobiography LWB serves up comes at a price, and rightfully so considering how nothing is left to be desired in such an opulent vehicle.

Expensive taste has never digested so well. In the full spectrum, I would have to say that the new Range Rover Autobiography LWB might be worth the price of admission as a worthy adversary for anything that dares to compete. Start saving now.