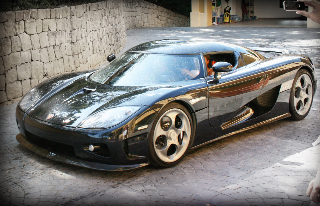 Okay, seriously, if you do not belive this is real… that’s OKAY! We don’t belive it either.

Supposidly this guy, Idar Vollvik, jumps clear over his Koenigsegg CCX BUT, I mean a BIG BUT, it looks completely fake. It look like he may have jumped along-side of the CCX. They said it was filmed using a Sony Ericsson Handset (Cell Phone) so naturally this makes an excuse for the poor quality of the video which we cannot confirm being real. You make the judgement call… view and enjoy the video below.

Famous Norwegian entrepreneur Idar Vollvik has copied a stunt performed by American basketball player Kobe Bryant jumping over an Aston Martin. Vollvik, founder of telecom company LUDO, jumped over his Koenigsegg CCX after a bet with a friend.

After seeing a YouTube video of Kobe Bryant jumping over an Aston Martin, Norwegian entrepreneur Idar Vollvik stated that “an Aston Martin is nothin’ but a sewing machine”. Later, the same evening he claimed that “I am as good a jumper as any basketball player”. Idar does indeed have a brown belt in two martial arts one being karate and the other still a well kept secret. According to a friend who wishes to remain anonymous, he confronted Idar, saying “I love you like a fat kid loves cake, but no way in hell could you ever jump a car”. This led to a short debate ending in a bet. Idar claimed that jumping over his Koenigsegg CCX would be a “piece of cake”. The car is according to the Guinness World Records the fastest production car on the planet, more importantly it only rises 1.07 meters (42 inches) above the turf. Filmed on a Sony Ericsson handset this video is the evidence sent to our source the day after.

Kobe Bryant’s response to jumping over an Aston Martin Video