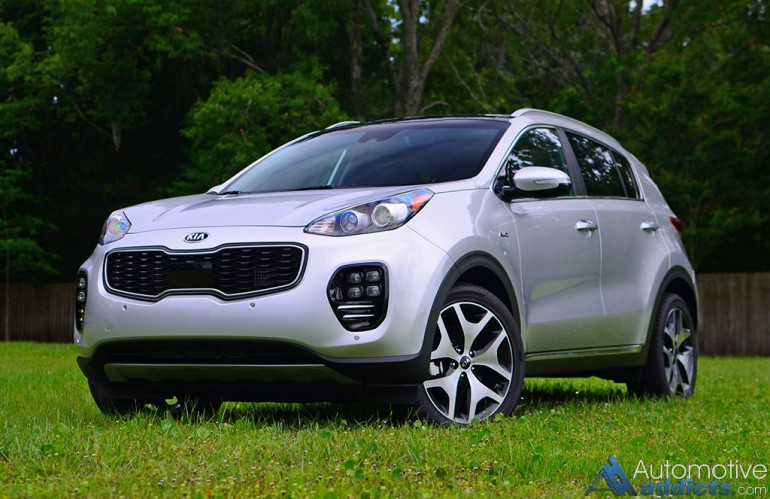 While the crossover vehicle segments are gaining unprecedented attention from the masses, Kia is there to captivate with the latest Sportage, completely redesigned for the 2017 model year.

>> Get the best price on the Kia Sportage from a network of local dealers now. <<

The new 2017 Kia Sportage has literally grown up and set out on a path to offer an abundance of goods in the form of highly desired amenities and features. Sporting the brand’s well-praised 2.0-liter turbocharged 4-cylinder engine with 240 horsepower and 260 lb-ft of torque mated to a 6-speed automatic transmission, the new Sportage in its top-level SX Turbo AWD trim is an attractive alternative to many midsize entry-level luxury crossovers. 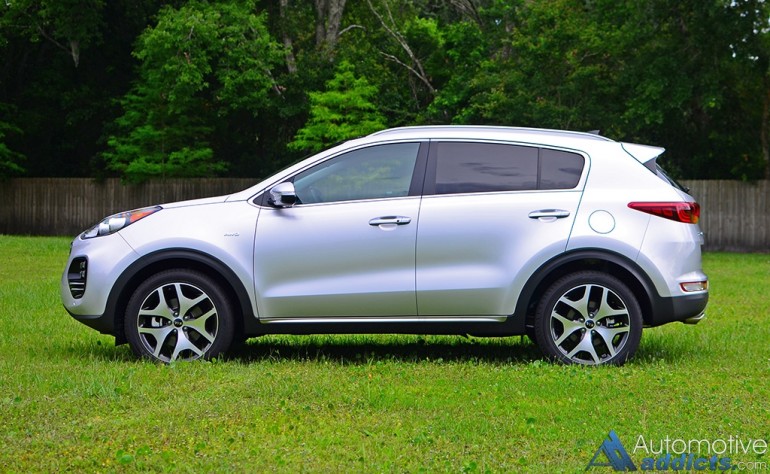 The challenges of combining a high level of versatility within vehicles have recently stood on the shoulders of crossover utility vehicles as of late. Kia has stepped up to the plate in a big way with the latest Sportage incorporating a compliant ride quality and a subtle sporty side through its SX Turbo AWD trim that I recently had a chance to drive. 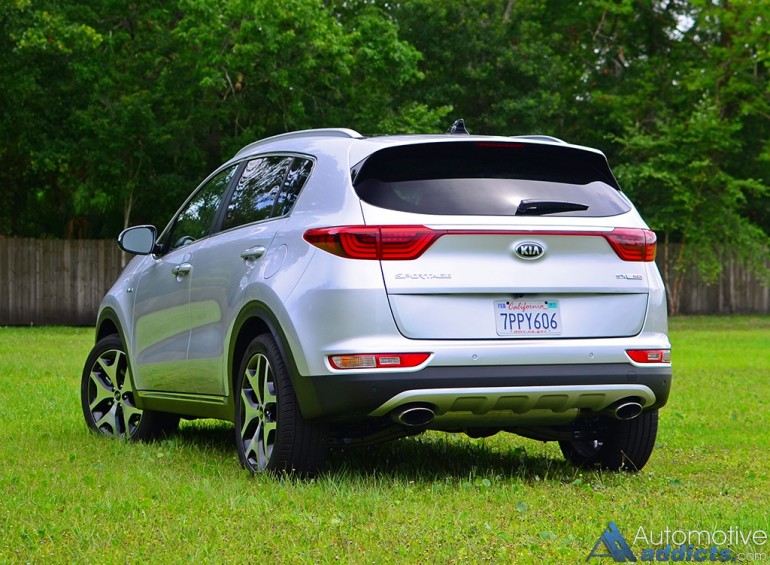 The power delivery from the 2.0-liter turbocharged engine is mostly predictable and consistent. There is very little turbo lag out of the hole, and the all-wheel-drive system keeps all four of the large-for-its-size 19-inch wheels planted to the ground without unwanted loss of traction. The driving position combined with decent visibility and assurance in handling places the new Kia Sportage SX Turbo AWD in an environment to please those who may venture from some midsize luxury crossovers. Getting up to 60 mph from a stop takes about 6.8 seconds, quite decent for the Sportage’s compact crossover class. Passing power is sufficient even when you load in four additional passengers and enough cargo to fill up the available 31 cubic feet of space out back behind the 60/40-split folding seat backs. Put the seat backs down and cargo volume opens up to just over 60 cubic feet and can be accessed by the power liftgate, which has a smart access feature that opens automatically after standing at the back of the vehicle for a few seconds. 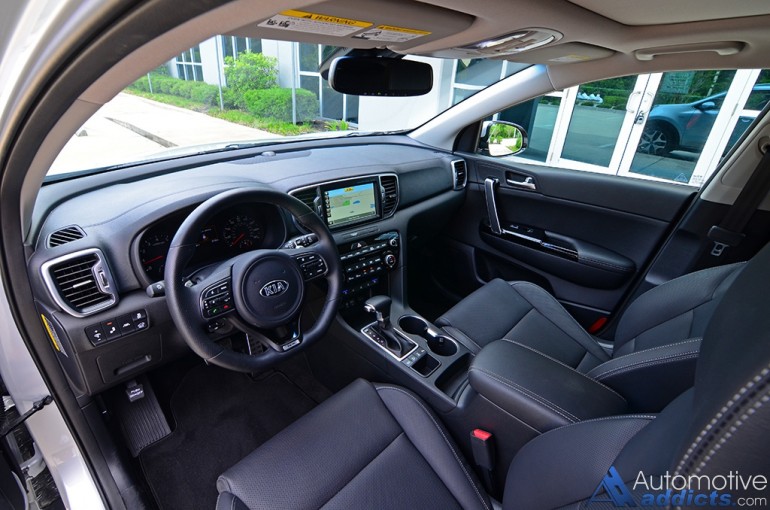 The creature comforts included with the 2017 Kia Sportage in the top SX Turbo AWD trim come in abundance numbers. Inside the cabin, which has a soft-touch dashboard and soft-touch materials on the door trim in the right places, many of the controls are straight forward and lessen the amount of clutter to put the theme of having a clean and simplistic design at the forefront. Additionally, Kia’s latest infotainment system is simple to control through dedicated function buttons or the 8-inch color touch screen with a quick-responding SD-card-powered navigation system that now features 3D map views. 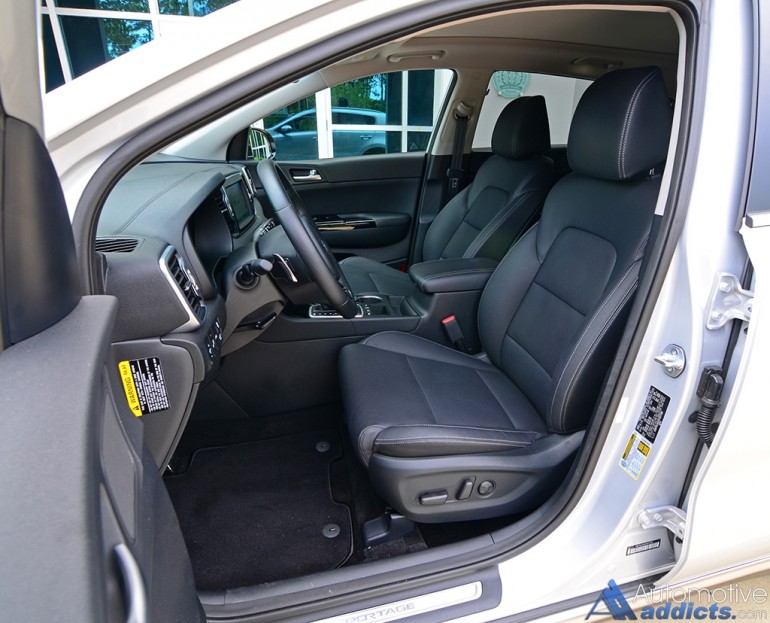 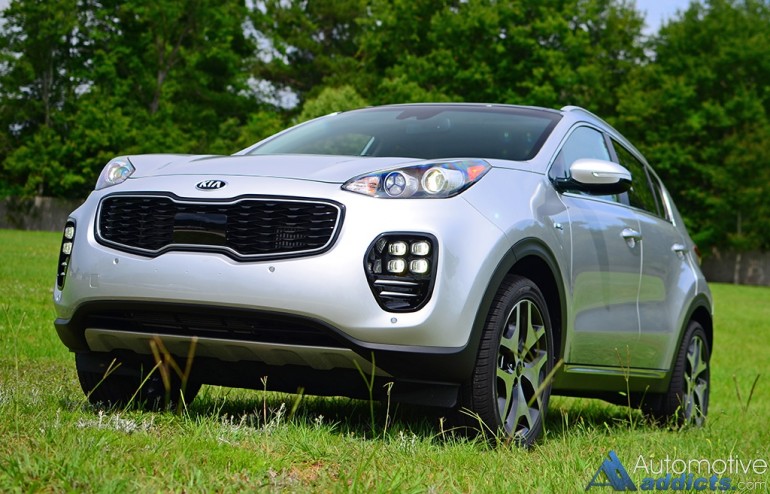 The new styling of the 2017 Kia Sportage is more of an acquired taste due to its aggressive front-end looks. The headlight bezels are more bug-eyed than a traditional look as is the grill’s uniquely sculpted design encapsulating the radar used for the forward collision warning and emergency braking system. Out back, the styling gets more contemporary but sharpens up with the use of LED taillights. The larger 19-inch wheels are a welcomed look to the Sportage SX Turbo AWD making it appear more grown-up, nearly molding into the midsized crossover category. The big 19-inch alloy wheel rollers wrapped in 245/45/R19 all-season tires seem to sacrifice a bit of the ride quality upon initial impact of sharp bumps, potholes or unevenly-paved road surfaces. 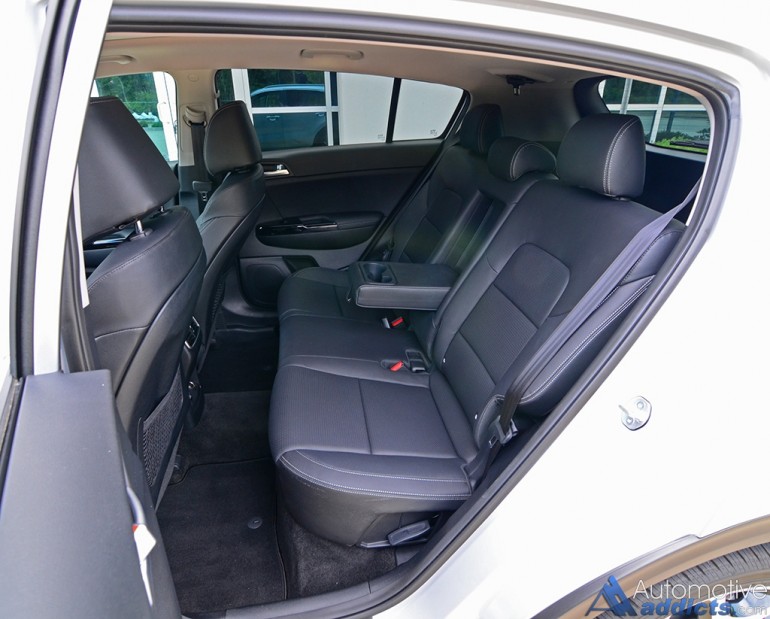 Surprisingly, the 2017 Kia Sportage SX AWD is more of a complete package than most of its competitors in offering several luxury features, decent seating proportions, and among the best performance for its class. However, at the cost of those items, the 2017 Sportage SX Turbo AWD is somewhat disappointing for its underwhelming fuel consumption figures, 20 mpg city and 23 mpg highway. While the fuel consumption is mostly consistent, it falls behind many competitors even with all-wheel-drive configurations. Though, having the 2.4-liter 4-cylinder engine in the base Sportage LX with front-wheel-drive you can expect to get 22 mpg city and 29 mpg highway. Opting for my favorite trim, the SX Turbo AWD, the Sportage is one of the most desirable for compact crossovers in my book thus far. 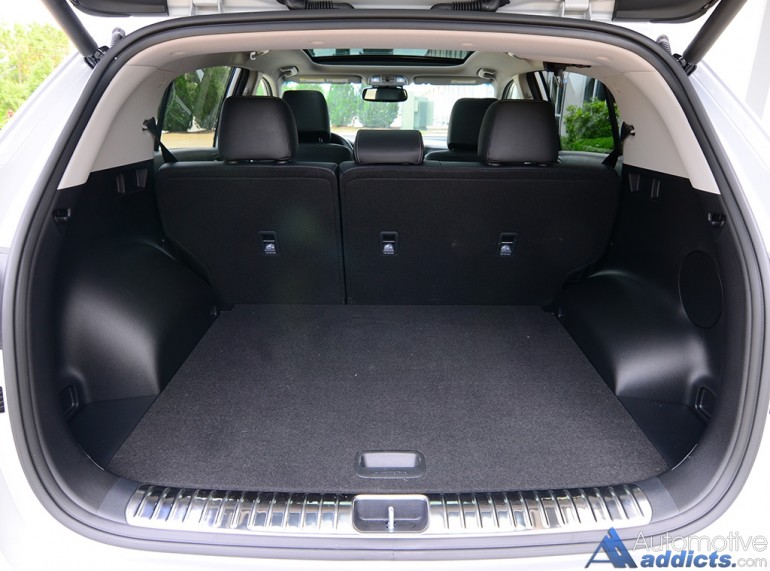 Kia has kept up with a good image in the realm of value in that they offer a 100,000 mile/10-year powertrain warranty and relatively competitive pricing. The new 2017 Kia Sportage is no different in that theme with a starting price of $22,990 for the base LX model with the less powerful but more efficient (23mpg city/30mpg highway) engine. Loading up the goods with the selection of my 2017 Kia Sportage SX Turbo AWD, which bundles up all available equipment, the as-tested price lands at $34,895. Such a price is nearly comparable to the base pricing of midsized crossovers, which isn’t all bad considering the collective of what the new Sportage SX Turbo AWD offers.

>> Get the best price on the Kia Sportage from a network of local dealers now. <<