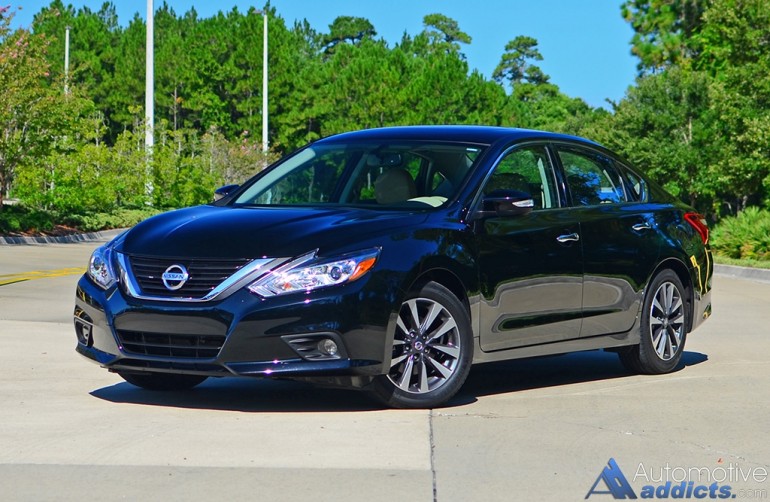 The Nissan Altima has been a hot-seller for many generations with sale numbers to compete directly with other popular midsized sedan offerings. In its latest generation, introduced as a 2013 model year, the Nissan Altima took on a new economical form with its 2.5-liter 4-cylinder engine to nearly dominate its segment for the time being. For 2016, the Nissan Altima gets a mid-cycle refresh to regain some of its lost ground in even though it remains to be a relevant contender as one of the most popular vehicles on the road today. 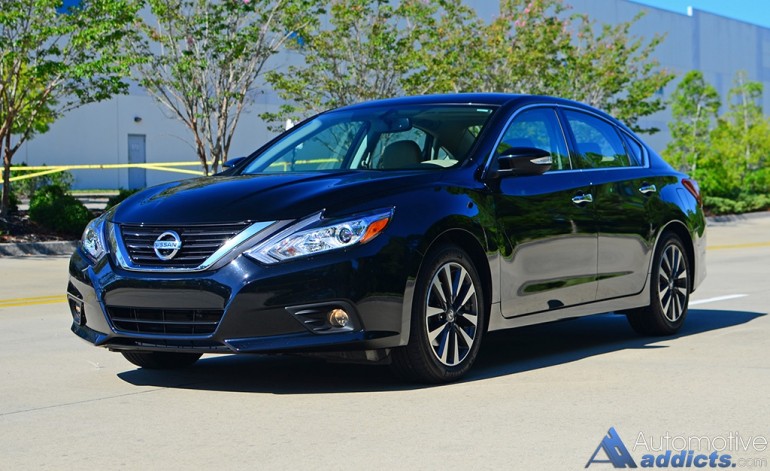 The new 2016 Nissan Altima gets a restyled front and rear end featuring brand-signature designs to somewhat mimic the trendy Murano and other redesign vehicles in the lineup. Riding off of the basis of two engine choices, the Nissan Altima continues with either a 2.5-liter 4-cylinder with 182 horsepower and 180 lb-ft of torque as found in my Altima 2.5 SL test vehicle or the powerful 3.5-liter V6 engine with 270 horsepower and 251 lb-ft of torque. Both engines get mated to a CVT (Continuously Variable Transmission) working together with either engine to send power to the front wheels.

The 2016 Nissan Altima in the 2.5 SL trim is a decent performer considering the engine choice. The power is transitioned smoothly through the CVT without much drama. Moreover, the CVT, despite its hate among enthusiasts, is the best yet to offer simulated shift ratios that drop down in increments to nearly emulate the shift pattern of a conventional automatic transmission. 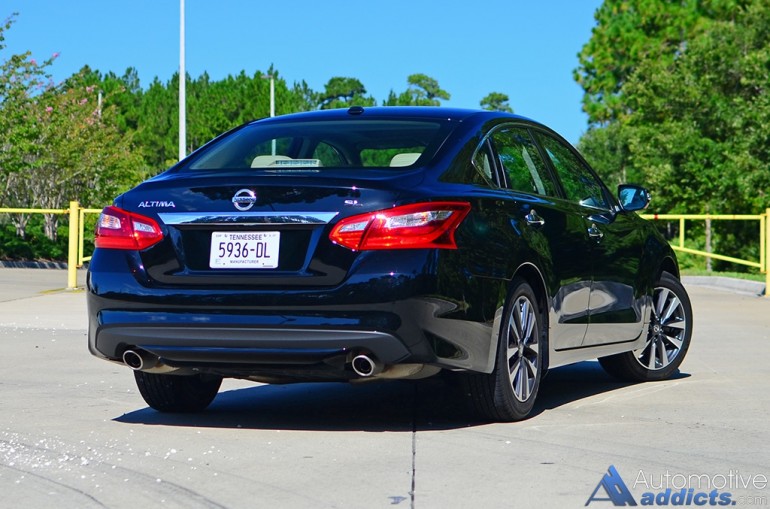 Having experienced many CVTs on the automotive market, old and new, I can say without a doubt that the 2016 Altima’s CVT is among the best in the business without much friction noise and a lessening of the traditional rubber band sensation. Though, the CVT is still just that, a transmission that resides on varying ratios and allowing the 4-cylinder engine to spin up with some unwanted droning sound emitting the cabin under moderate to hard acceleration. The ride quality and feedback is mostly confident inspiring in the new Altima 2.5 SL, something that gets better as you move to the newly-offered sporty 2.5 SR and powerful 3.5 SR trims with larger 18-inch wheels over my test vehicle’s 17-inchers. In all, the 2016 Altima 2.5 SL performs well, livelier than the Toyota Camry 4-cylinder but with a bit more cabin noise from the buzzing engine. Scooting to 60 mph the 2016 Nissan Altima 2.5 SL takes about 7.8 seconds, slightly better than some of its direct 4-cylinder-powered competition. 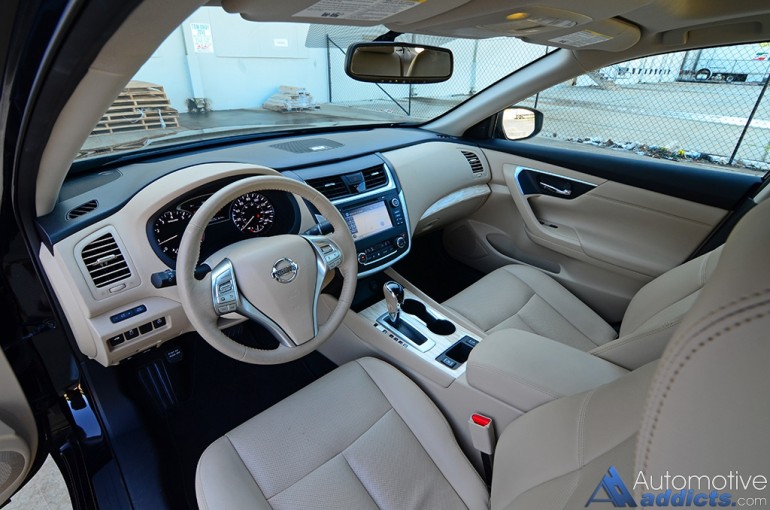 Fuel economy in the 2016 Nissan Altima 2.5 SL is class-leading and consistent, for the most part. The CVT does an excellent job in management of the engine’s RPM under light loads and locks up a ratio and torque converter whenever possible to keep the engine in sync with the wheels to limit unnecessarily high RPMs. The EPA estimates come in at 27 mpg city, 39 mpg highway, and 31 mpg combined. Such numbers are attainable, but the highway mileage quickly falls as you approach speeds higher than 65 mph. I saw a steady 38 mpg on the Interstate and about 29 mpg around town, mostly exceptional for such a large vehicle. 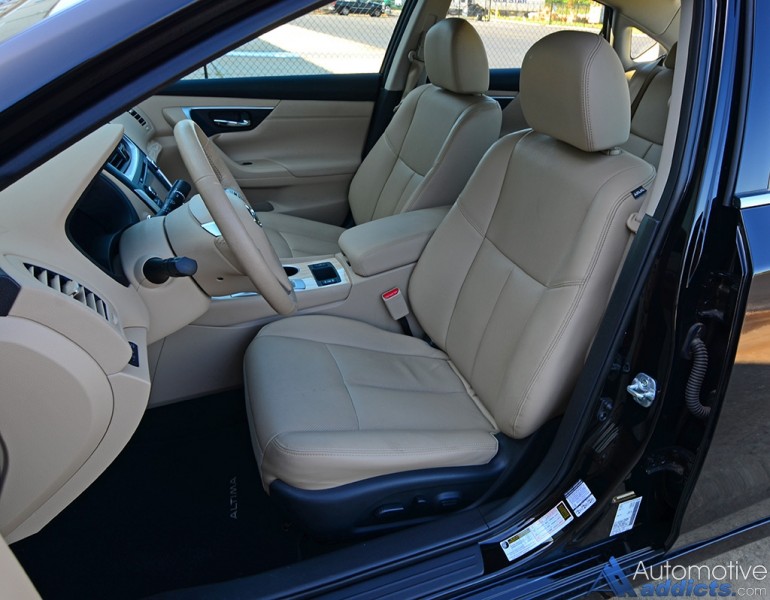 Nissan’s enthusiasm in their brand is still part of the 2016 Nissan Altima in offering a V6 engine and sporty trim levels for the new model year. Though, some of the forward momentum of technology and premium interior qualities have been out of the midcycle refresh. In that, the 2016 Nissan Altima 2.5 SL manages to retain several hard plastic surfaces throughout the interior only to be dolled up with a few accenting colors. A limited portion of the dashboard is soft touch as well as the door panel belt line and areas where you would naturally touch. Otherwise, there remains to be a diminishing perception of quality throughout the interior that is followed up with a lackluster infotainment system and 7-inch touchscreen. Though, the infotainment system is straightforward and doesn’t leave you guessing with an extensive list of voice commands that are easily accessed. 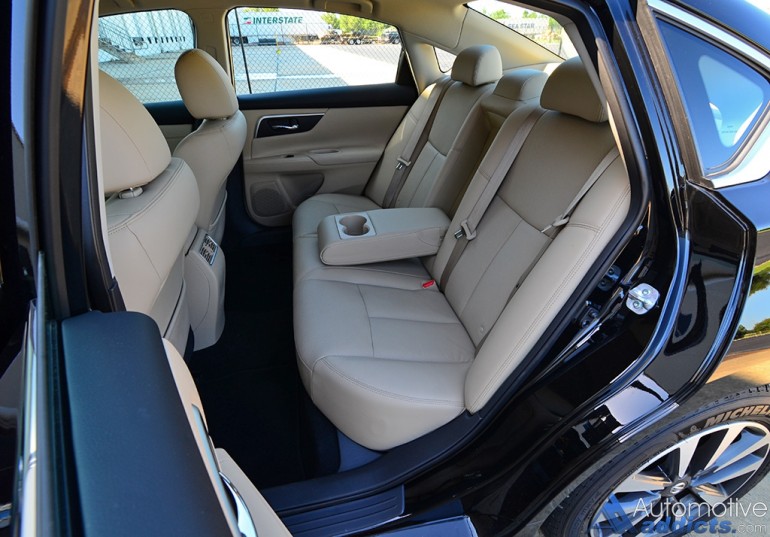 Keeping the 2016 Nissan Altima relevant with its midcycle refresh rests with its pricing, which has been an attractive part of what the Altima brings to the table starting at just $22,500 before any fees. Moving to the top SL trim for the 4-cylinder model with only three options (moonroof, floor mats, and the technology package), the price of my test vehicle comes to $32,115 including a $835 destination charge.