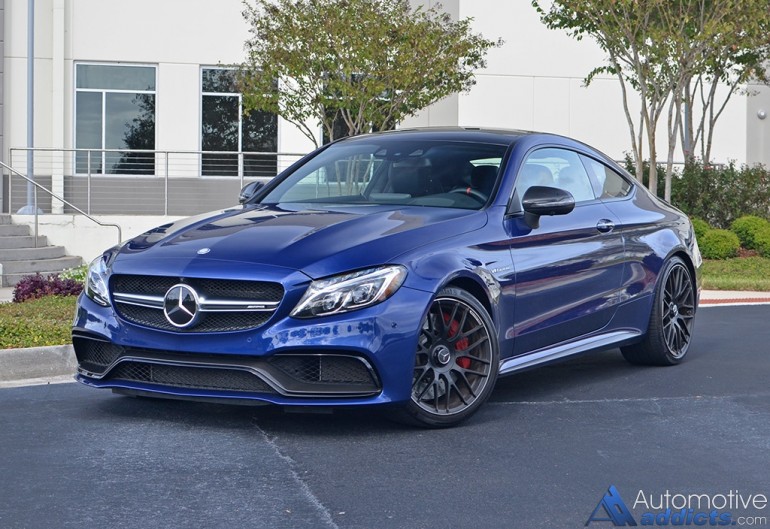 The AMG outfit of Mercedes-Benz has been working overtime to introduce new models that offer no compromise in the luxury performance arena. The latest C Class Coupe has received such treatment in the new C63 S with a thrashing 4.0-liter biturbo V8 stuffed under the hood and a remarkable chassis to contain and control the deep-growling force-fed power to run with stiff competition. 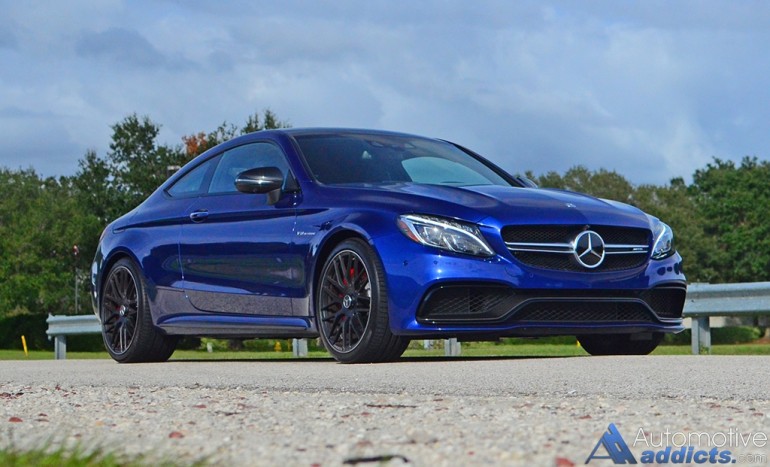 For many years, the C Class Coupe has reckoned with BMW’s M3 Coupe and current M4 in its latest redesigned skin. The new biturbo V8 under the bonnet of the C63 has its work cut out to battle the new BMW M4 gracefully transmitting 503 horsepower and 516 lb-ft of torque in the C63 S variant from eight cylinders of forced induction. With about 80 more horsepower on tap than the new base BMW M4, the C63 S attempts to make a bold statement on paper. Though, backing up the power figure with matching real-world performance is an uphill battle as the new C63 S manages to virtually match the new M4 in a run to 60 mph, which takes the C63 S Coupe about 3.9 seconds. Moreover, the C63 S with its added power over the standard C63 (469 horsepower and 479 lb-ft of torque), keeps with its competition but doesn’t dethrone the opposition as you would think it would. 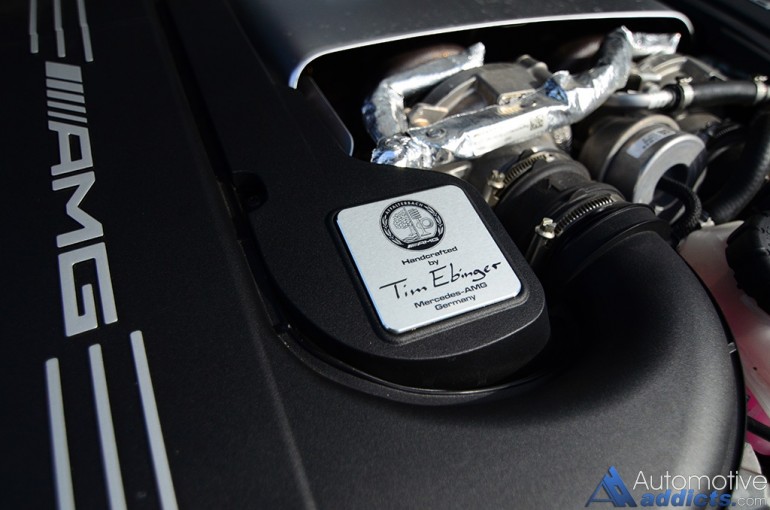 The new 2017 Mercedes-AMG C63 S is in no way a pushover, nor a machine to take lightly. The collective of its performance attributes allow it to run with the big dogs and easily stretch its legs on open highways and carve up twisty back roads. The biturbo V8 engine is a masterpiece, one deserving of its badge signed by its sole builder. The power from the biturbo V8 in the C63 S surges up through the power band but suffers from a slight bit of lag under 2,000 rpm. While the peak torque is stated to come on at 1,750 rpm, I sensed some delay in getting the full beans when the engine is taxed at lower RPMs. Once things get moving, they keep on moving well into triple digit speeds if you’re not paying attention. Once such speeds are reached, hopefully on a track, the stability of the C63 S is experienced with a hunkered down sensation and heavily weighted steering wheel. One thing to note is that the steering effort becomes exceptionally light when parking or driving at very low speeds, which can be a good thing for some. While there is some apparent isolation from the road, the C63 S attempts to communicate through the clattering exhaust and turbo wastegates spawning loud gurgles as each shift is made by way of the multi-clutch 7-speed automatic transmission, which can be commanded through the beefy steering-wheel-mounted paddles. 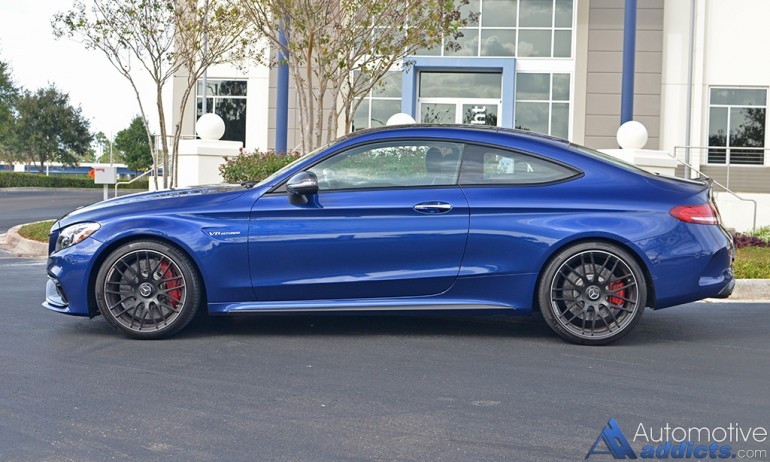 Mercedes-AMG elected to utilize a multi-clutch setup for the transmission in the new C63 S. Such a choice permits the C63 to take advantage of relatively quick upshifts and throttle-matched downshifts to extract the most from the boosted V8 engine. Such a unit performs an abundance of slipping of its wet-clutch setup to engage gears, such as on its default second gear starts in the automatic Comfort mode. The downfall here is that the automatic transmission lacks firing off shifts like a dual-clutch unit, leaving a slight edge to a properly equipped M4. 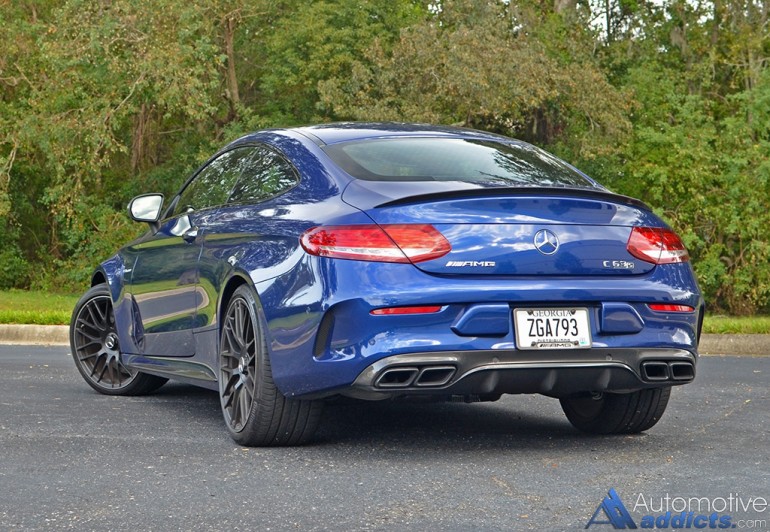 Borrowing many traits from the Mercedes-AMG GT S, the C63 S contains multiple personalities by way of adjustable adaptive dampers with three selectable modes, five dynamic drive modes (Individual, Comfort, Sport, Sport+, and Race), and a separate two-mode setting for the exhaust (sound). The handling from the C63 S is remarkable but tends to let things get fun and wild with oversteer upon disabling the traction and stability control. Enabling the Race mode placed the stability system into a more relaxed state allowing the rear end to come out in small amounts in addition to letting the rear wheels spin. In comparing the C63 S to the BMW M4, the C63 S doesn’t seem to have as good of a balance in keeping the rear composed or following a line that you pick for a short drift. I am no expert by any means when it comes to drifting, but I still feel that the M4 has a slight edge over the C63 S’ overall handling dynamic. Though, the braking performance of my C63 S test vehicle with its steel cross-drilled rotors and 6-piston front calipers appears to better the M4 without the optional Carbon Ceramic brakes. 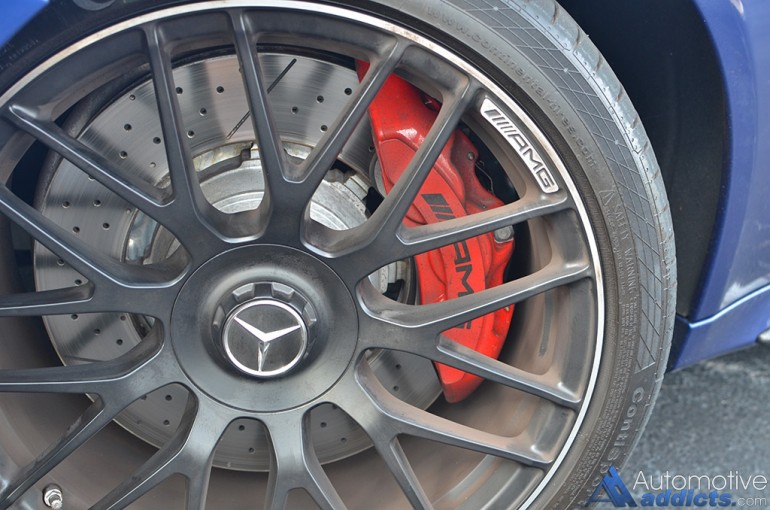 In the department of efficiency, the new 2017 C63 S can consume decent amounts of premium fuel. To its benefit, the C63 S does all that it can to savor every last drop of fuel by way of its engine start-stop system and a nifty feature to decouple the drive wheels from the drivetrain upon deceleration at times. The drivetrain will automatically place the car in a virtual neutral gearing when it senses that you have eased off of the throttle, which will, in essence, prevent deceleration from the engine’s backpressure and transmission downshifts. You can think of it as the transmission depressing a clutch and selecting neutral as you would on a normal manual transmission. By using the feature, which is only permitted in the default Comfort drive mode, the C63 S is able to get and sometimes best its 23 mpg highway EPA figure. Around town, things get interesting as the fuel mileage quickly drops to slightly below the 17 mpg city EPA figure when I repeatedly gave the biturbo V8 the full beans on back roads and in the midst of light traffic. I would say my overall average came to about 18.6 mpg, nearly matching the EPA estimated 19 mpg combined figure. 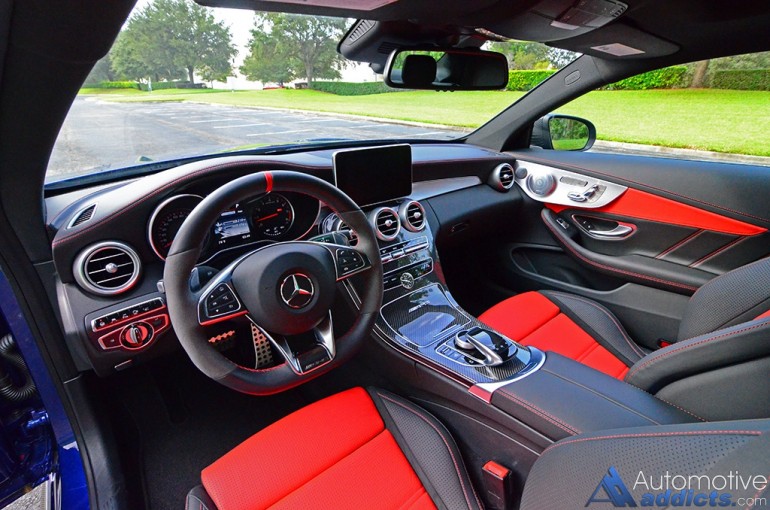 Mercedes-AMG injected the interior of the new C63 S with all that it could to show off its performance theme with an abundance of soft-touch surfaces, carbon fiber bits, brushed aluminum trim, and accented red stitching with matching perforated leather seat inserts. The cabin exudes a sporty nature with the right amount of luxury and somewhat supportive heated seats up front. The major qualm with the cabin would be the gear selector being mounted on the steering column. Such a location seems to diminish the sporty character of the C63 S inside, only making sense in the aspect of saving the limited amount of space that the C63 provides. Still, I wouldn’t be critical if Mercedes decided to lose a cup holder or two to place the shifter behind the large touchpad and COMAND infotainment system’s control wheel, as it is in the GT S. To add insult to injury in demonstrating the lack of space inside of the C63, the 7-inch infotainment screen floats out from the dashboard much like an iPad mini would resting above the unique round vents encapsulated in a carbon fiber panel. I get it, it’s a new theme for interior design and layout, and I suppose it will take a while to get used to for some. 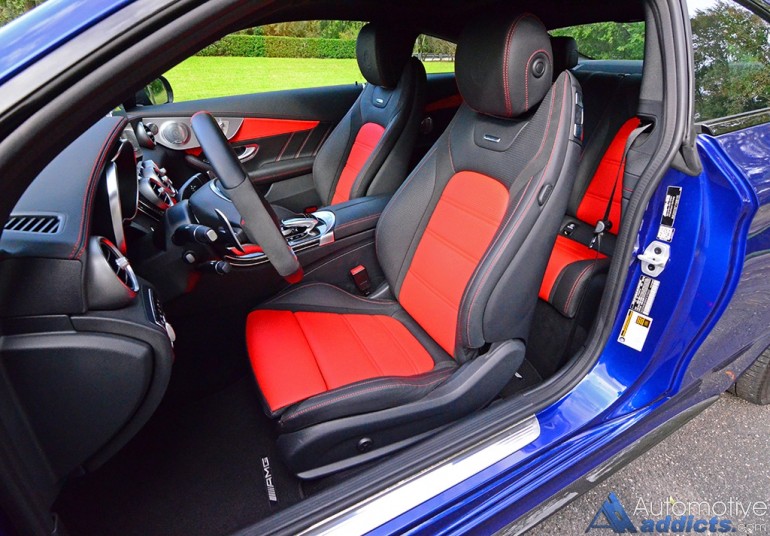 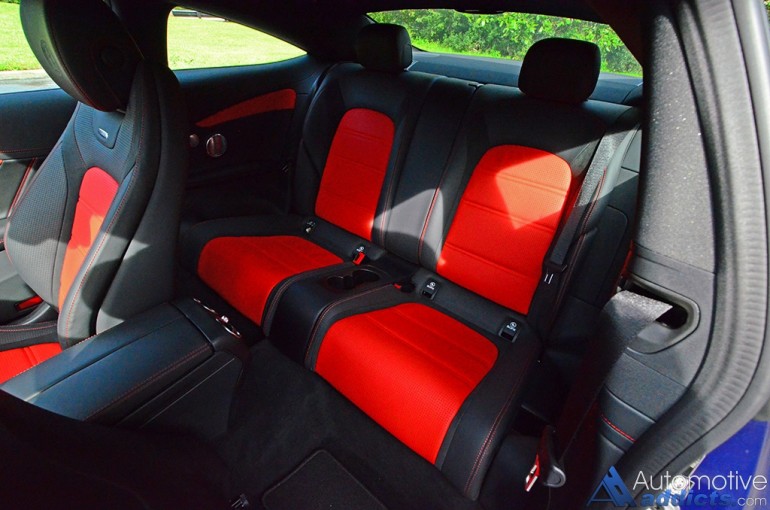 While the new 2017 Mercedes-AMG C63 S may edge out the BMW M4 in price, there are some bits added to the formula that may justify my test vehicle’s as-tested price of $93,885. Though, I am still hard pressed to recommend paying the full admission considering other alternatives have the performance chops to match for a little less. Although, some others may fall short in being as stylish and sleek as the new AMG C63 S. You’ll want to turn around and look at the gorgeous silhouette of the C63 S each time you park it and walk away. Fundamentally, it’s a Supercar wrapped up in a compact two-door hot rod Mercedes that you can drive daily and never feel overly pretentious.