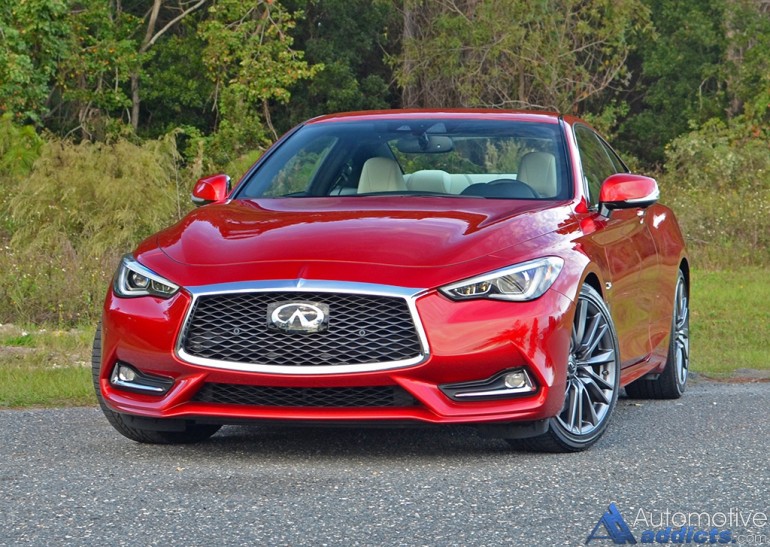 In my opinion, the Infiniti brand has been a sleeping giant in the past few years as they have revamped the naming structure of their vehicles while at the same time introducing new models that are gaining much welcomed attention in the luxury world. In the recent months, attention has been diverted to the all-new Q60 Coupe, a vehicle that has been highly anticipated as the older G37-based Q60 coupe is no longer beholden to carrying the luxury sports coupe torch for the brand. 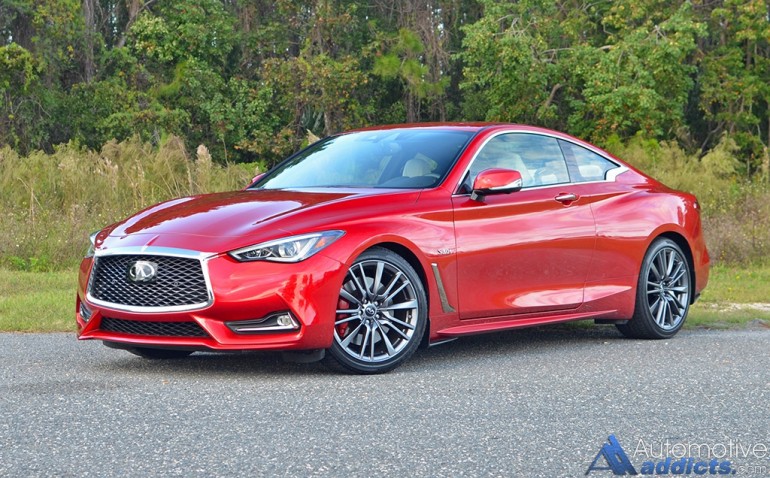 Following closely to the well-received Q60 Coupe Concept vehicle and somewhat inspired by the older Essence Concept, the new Infiniti Q60 is a stunningly beautiful car, one that has onlookers giving my loaded-up test vehicle second looks as it is garnered in a delicious candy apple-reddish Dynamic Sunstone exterior paint. With a total of three defined trim levels and three engine choices, and the availability of all-wheel-drive for each, the new Q60 Coupe attempts to offer something for everyone in the coveted luxury and premium sports coupe segment. Starting with the base rear-wheel-drive Q60 2.0t, the sports coupe gets a 2.0-liter turbocharged 4-cylinder engine with 208 horsepower. From there, the mid-ranged Q60 3.0t gets a 3.0-liter twin-turbo V6 with 300 horsepower. The top-trimmed Q60, which Infiniti is touting as the Red Sport 400, also gets a 3.0-liter twin-turbo engine but with 400 horsepower and 350 lb-ft of torque, as found in my test vehicle. To signify the Red Sport 400 from the other models, the emblems get a red “S” while the 300-horsepower Silver Sport variant gets a silver “S,” and the base model is just left to the Q60 nameplate on the thin-statured composite trunk lid and a 2.0t badge on the side fender.

The Infiniti Q60 Red Sport 400 with its new VR-series engine (VR30), which pays homage to its exotic GT-R sibling’s VR-series engine architecture, is eager to get the Q60 up to 60 mph in just 4.4 seconds. The power from the engine is strong and has a wide power band that the 7-speed automatic transmission, a long-time proven powerhouse for the brand, loves to stretch out at times. The combination works in harmony to lay the power down efficiently, sometimes riding long through a gear from low RPMs utilizing all of the available torque. The torque comes on early, which surges near its full potential from 1,600 rpm to 5,200 rpm. The twin-turbo V6 in the Q60 Red Sport never feels inadequate. In fact, the engine seems like it is sometimes too much for the chassis of the premium coupe. The new Q60 coupe is based on the premises of a coupe version of its Q50 sedan sibling.

While the twin-turbo V6 of the new Q60 Red Sport is a smooth operator that I believe to be a sleeper, the coupe’s athleticism is mostly agreeable on public roads instead of on a track. By that, I will go as far as to say the Q60 Red Sport leaves a bit to be desired when pitted against BMWs of the same performance realm, such as the 440i with the M Sport package. Most of the Infiniti Q60 Red Sport’s downfall starts and ends with the optional Direct Adaptive Steering system, which is a full-on steer-by-wire setup that could easily be closely compared to current force-feedback steering wheels for your latest PlayStation or Xbox gaming systems. The system goes off of the basis of eliminating steering vibrations or variations when going over imperfect surfaces. It does just that, to say the least – it is void of any feeling of the road or much of a reference to the driver of what the front wheels are doing other than rotating their 19-inch mass of two forged wheels and a disc brake sliding through red 4-piston calipers. The steering effort and dynamics can be adjusted through the Drive Mode Selector option on the lower infotainment screen. While there is a fail-safe for the steering, if it were ever to fail to communicate from its servos to the electric actuators to turn the wheels, a clutch mechanism would enable a physical connection from the steering to the front wheels. Otherwise, the clutch is always open when the vehicle is on acting like the most sophisticated remote control car around. 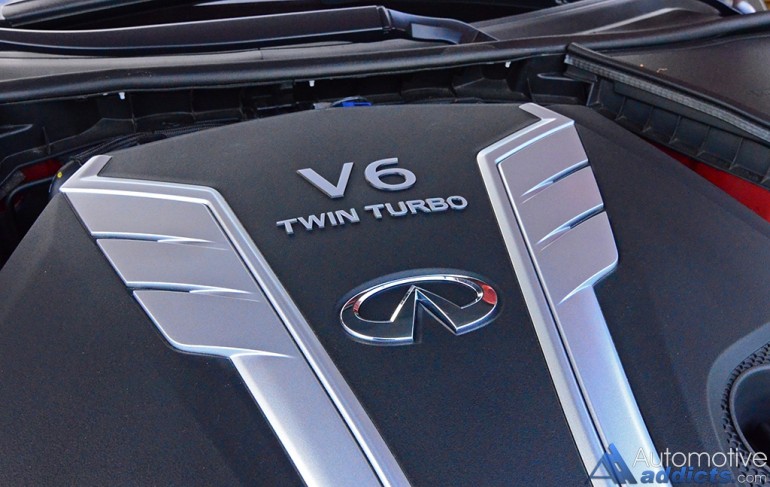 Going through the on-screen drive settings, which is enabled upon the drive mode’s Personal Setting, you can select one of a total of 6 drive modes (Snow, Eco, Standard, Sport, Sport+, and Personal). Each mode through Standard, Sport and Sport+ have slight subtle adjustments of the Direct Adaptive Steering, engine response, transmission shifting, and adjustment of the adaptive suspension dampers. The adaptive dampers only have two different modes to select, Standard and Sport, which are placed in Sport upon bringing up the Sport+ or a properly configured Personal drive mode. Even then, the difference in ride quality is subtle, which overall, is agreeable for a Premium Sports Coupe. 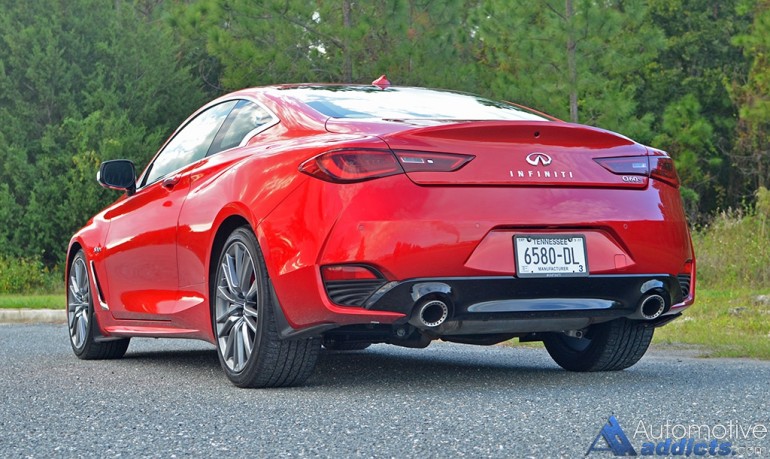 To sum up the performance qualities of the Q60 Red Sport 400 Coupe, it’s a nicely balanced vehicle that could use a bit more tire patch (265/35/R19 rears) and a physically-connected steering rack. The engine is never lagging, always full of power at the drop of your right foot. The way in which the Q60 Red Sport 400 tracks is interesting. Going off of the sometimes twitchy Direct Adaptive Steering, the follow of the rear can be indecisive and sometimes catch you off guard where the stability control steps in rather hard to sap any bit of oversteer. Essentially, you can mostly blame it on the steering system and the robust power output of the twin-turbo V6 engine. The stability and traction control is aggressive, to put it lightly. In totality, the Q60 Red Sport 400 Coupe has potential, but it isn’t fully tapped due to the virtually numb steering and the need for more meaty tires to keep the rear planted when the twin-turbo V6 kicks in. In a way, the 400 horsepower of the twin-turbo V6 is almost too much for the Q60 Coupe to handle. However, I assure enthusiasts that they would be delighted to pilot the Q60 Red Sport 400 Coupe on long straights and roads with light bends. The engine loves to rev and has plenty of smooth power to offer. 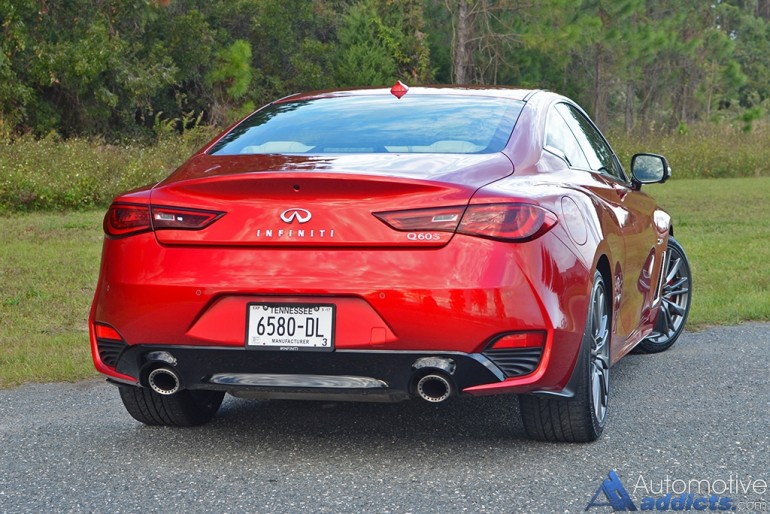 Fuel economy was surprisingly good in my time with the Q60 Red Sport 400 Coupe. I averaged about 29.1 mpg on the highway, which is much better than the EPA-estimated 27 mpg highway figure, and that was in the Standard Drive mode, not the push-your-foot-back Eco-pedal-enabling Eco mode. Additionally, the city mileage varied, but I was able to best the EPA-estimate of 20 mpg by about one mpg. Combined, I saw about 24.8 mpg, another surprising figure considering the Q60 Red Sport has 400 horsepower on tap. 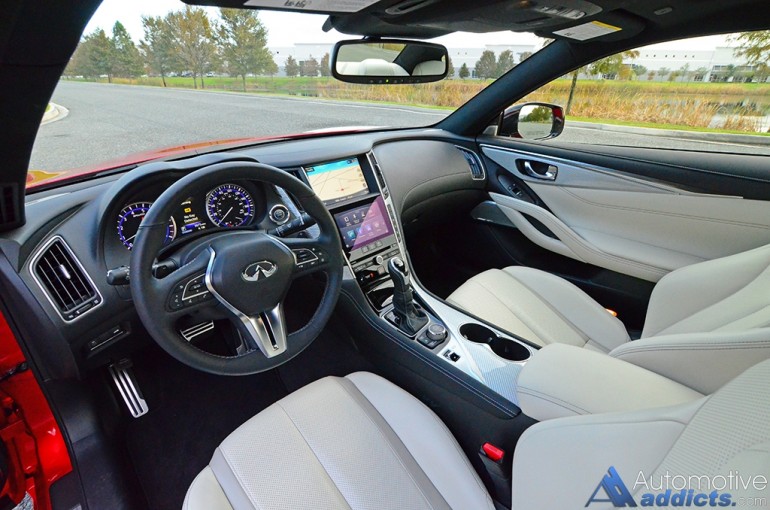 The luxury appointments and lavish cabin of the new Q60 are nearly as stunning as its stylish exterior. The contrasting materials, several soft-touch surfaces, and sporty perforated leather heated front seats are nearly perfect. The cabin has an agreeable theme with Silver Optic Carbon trim on the doors and center stack. Following the expected Premium Sports Coupe design, the interior is more tailored for the front occupants leaving the low-roof-lined rear two seats a bit cramped but slightly improved over the Q60’s predecessor, if that means anything to those familiar with such. 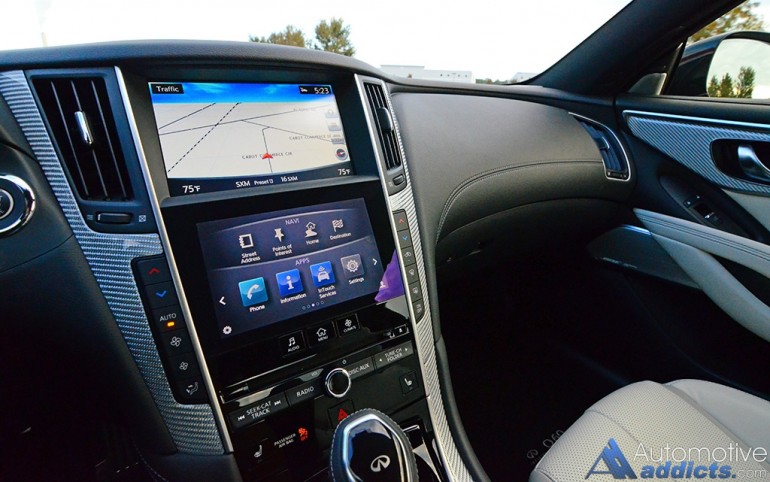 Infiniti ventured into a new realm with its new dual-screen infotainment system in the Q60, dubbed Infiniti InTouch. The newer unit, first introduced a few years back on the Q50 sedan, has received updates to improve upon its response. The drawback here remains to be that the system requires a steep learning curve with an abundance of system menus, settings, and app features that appear to be somewhat scattered. It took me the better part of my week with the Q60 to become acclimated to the core functions, while I still had trouble quickly accessing other essential settings. To sum it up, the lower screen’s complexities make the system unintuitive. The upper screen is used more for navigation map display and limited information and incorporates pinch-zoom and drag features, much like today’s smartphones. The lack of many physical buttons forces you to utilize the lower screen to bring up features that are thought to have their own button, such as the control for the heated steering wheel. I will say, the 13-speaker Bose Performance Series audio system isn’t lacking when it comes to integration and connectivity, which includes Bluetooth audio streaming, iPod USB connection, USB device connection, Auxiliary connection, CD-player, Sirius XM, FM/AM, and audio apps. 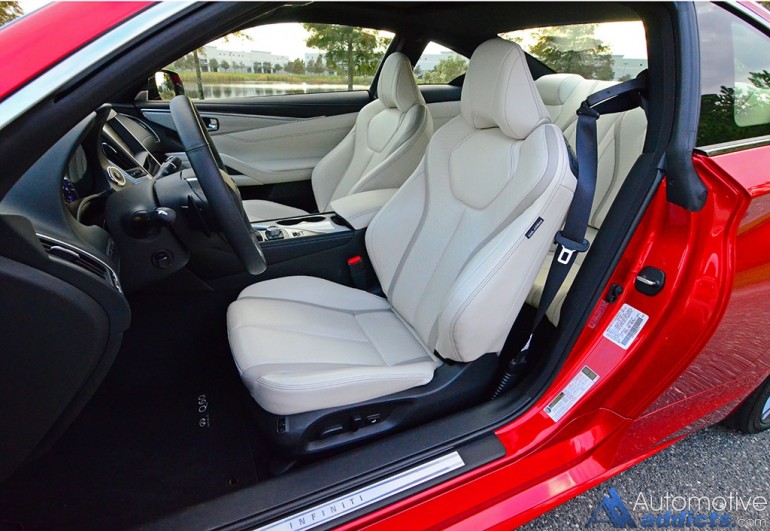 A mass of active safety features blanket the new Q60 Red Sport 400 Coupe when equipped with the Technology Package and Driver Assistance Package. You get a bevy of features that prevent accidents with warnings and intervention when you depart your lane, have a vehicle in your blind spot, approach a vehicle too fast, or back up into oncoming traffic and objects. Additionally, pedestrians are detected, and audible alerts ring before emergency braking is applied. All of the features work seamlessly in the background. The 360-degree around-view monitor on my Q60 test vehicle is also a welcomed feature that Infiniti has pioneered for the automotive industry. Keeping things safe at night, the Q60 Red Sport 400 coupe gets remarkably bright adaptive LED headlights with auto highbeams and LED foglights. 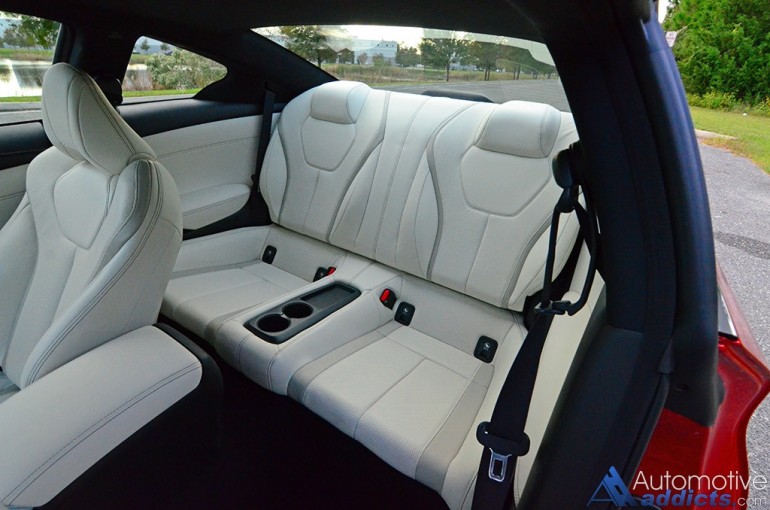 While Infiniti may have been recognized as a brand that was awaiting the moves of its competition before committing to any big changes, I can say without a doubt that the new Q60 Coupe in its Red Sport 400 trim is literally a fast leap in the right direction. Despite an immense disdain for the Direct Adaptive Steering system for those who want to “feel” the road, the Q60 Red Sport 400 has the proper performance chops, two-door luxury appointments, and stunningly fresh looks to win over many. Based on looks and its 400 horsepower figure alone, the Q60 Red Sport 400 Coupe is deserving of its nearly-loaded as-tested price of $60,355, which includes a $905 destination charge. Even better, a base Q60 Coupe with the 2.0-liter turbocharged 4-cylinder engine starts at just $38,950. Riding on just the merits of the new Q60 Coupe, Infiniti is redefining their presence deep into the automotive luxury spectrum. Now, we all await Infiniti to take the Q60’s formula and expand it, maybe even go crazy with a full-on performance variant to compete with BMW M and Mercedes-AMG, because it’s almost there!