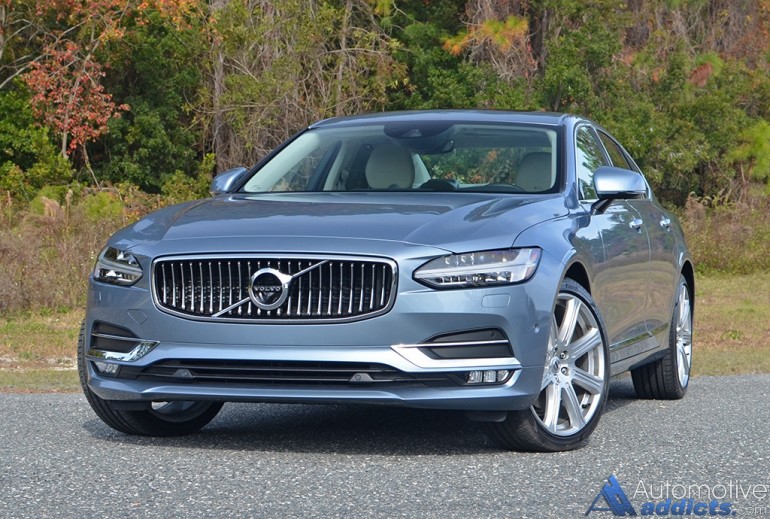 While Volvo continues to be at the forefront of advanced safety technology, the Swedish automaker is taking new strides to garner attention in the Luxury world with the introduction of the midsized S90 replacing the outgoing S80 sedan. The all-new S90 embodies the brand’s new signature style first captured in the new XC90 winning over the masses and taking home many awards.

To further embed the Volvo brand into the luxury spectrum, the S90 is a welcomed addition to the lineup that nearly rivals full-sized luxury sedans but makes due with conservative principles when it comes to a small-but-powerful and capable powertrain. 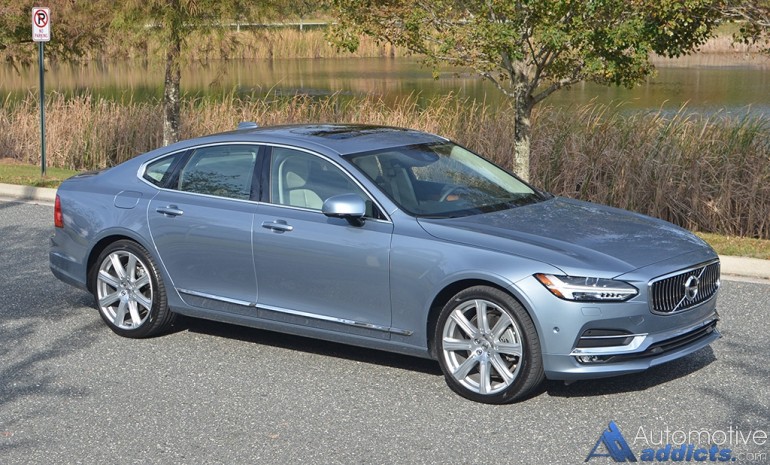 The powertrain of choice in the all-new S90 T6, the upper tier of offered trims (total of four trim levels: T5 Momentum, T5 Inscription, T6 AWD Momentum, and T6 AWD Inscription), is Volvo’s latest turbocharged and supercharged 2.0-liter 4-cylinder engine. The unique powertrain, combining the low-end forced induction of a supercharger and the high-strung torque and horsepower provided by a turbocharger, takes the best of both worlds wrapped up in an economical package. Power output from the Turbocharged and Supercharged 4-cylinder is quite linear to get the S90 moving up to speed. We made several 0-60 mph runs and came away with the best time of 5.8 seconds in our loaded-up S90 T6 AWD Inscription test vehicle. 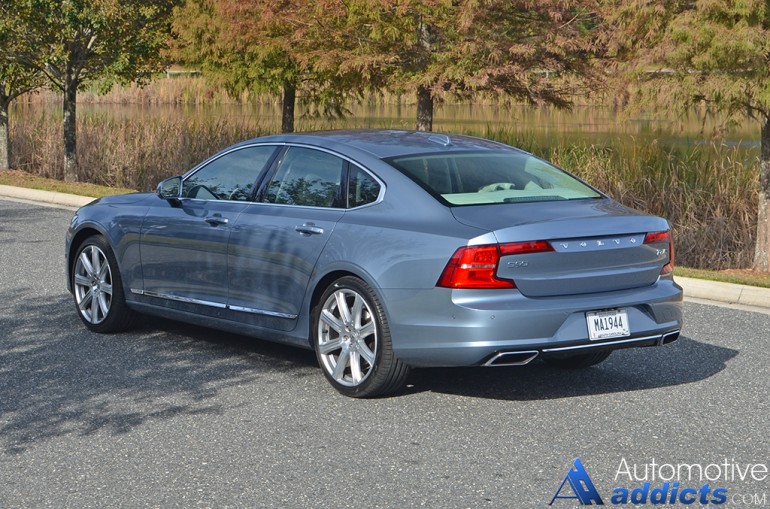 On the performance scale, the S90 T6 AWD Inscription is nicely balanced and proves that having a 4-cylinder with the assistance of both a supercharger and turbocharger can be a good experience. With that in mind, the S90 T6 AWD never felt inadequate in any situation when it comes to the need for power delivery. The body motion was kept in check by way of the adaptive dampers and air suspension system that would seldom make height adjustments or purposely lower itself upon parking or selecting the Dynamic drive mode, one of a total of four modes (Eco, Comfort, Dynamic, Individual). The larger optional Inscription 20-inch wheels equipped on my test vehicle transmitted a bit of harshness going over large bumps or road imperfections. Otherwise, the suspension was dialed in with a good balance of comfort and sport that inspirited added driver confidence. Though, the S90 T6 AWD isn’t quite up to par with the likings of BMW’s 5 Series. The S90 T6 AWD is more tuned to the notion of luxury instead of being a steadily planted luxury sports sedan.

When it comes to efficiency, the Volvo S90 T6 AWD Inscription using a turbocharged and supercharged 4-cylinder speaks volumes when you consider you can easily achieve a consistent 31 mpg on the highway. I saw such an average during my time with the S90, and the fuel consumption didn’t deviate far from the 31 mpg figure. When faced with city driving, part in thanks to the start/stop system and the 8-speed automatic transmission’s assuredness of selecting the proper gear, I saw about 23 mpg in the city, one mpg better than the EPA-estimated 22 mpg for the new S90 T6 AWD Inscription. 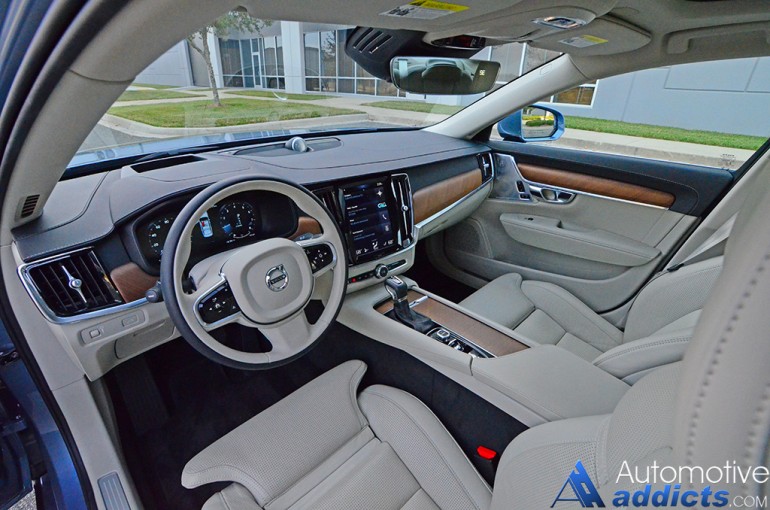 Diving into the interior of the new S90 T6 AWD Inscription, Volvo took a page directly out of their award-famed XC90 SUV, which isn’t a bad thing at all. Keeping with sedan proportions, those that nearly escape midsized measurements and rivaling full-sized dimensions, the S90 makes use of high-quality materials and a full-on luxurious theme. The dashboard is full of soft-touch surfaces and encapsulates textured wood and chrome-treated trim with large speakers grills by way of the optional and remarkably-sounding 1400-watt Bowers & Wilkins premium sound system with a total of 19 speakers. The smallish heating steering wheel adds a nice sporting feel in addition to its heavy weightiness, which may be a slight turnoff for some. While the steering effort can be adjusted, it remains to be somewhat heavy for a midsized luxury sedan in the default comfort drive mode. Additionally, while on the subject of steering effort and feedback, the Pilot Assist feature that nearly drives the S90 for you when you have clearly painted road lines on the highway, is overly aggressive and almost pulls the wheel out of your hand when it wants to turn to follow the lines of the road. 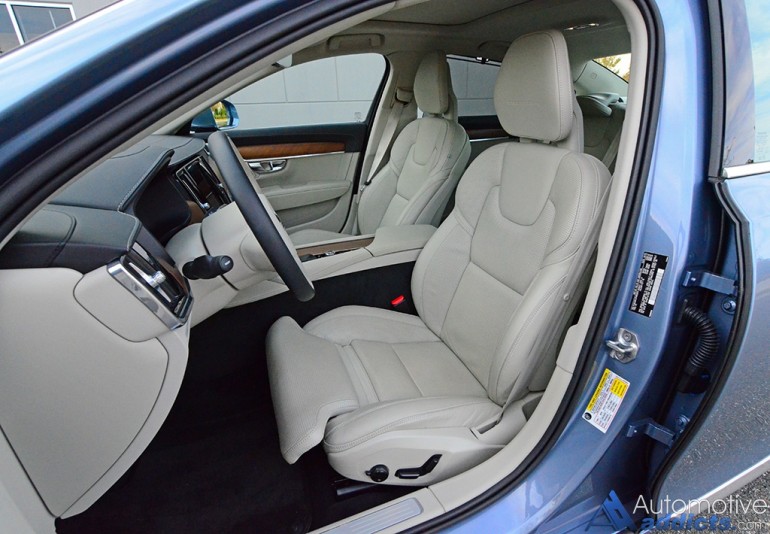 The generous interior dimensions of the Volvo S90 are part of its inviting cabin, in addition to the supportive 10-way power adjustable perforated heated and ventilated front seats. The minimalistic approach to the cabin and the dashboard controls are also a welcomed trait to take advantage of today’s tech combining most vehicle functions and controls through a center 12-inch screen with a portrait orientation. The large infotainment touch screen is quick with its response but tends to confuse with its steep learning curve to find the proper menu sets and functions. Otherwise, the overall usability of the system after you become acclimated to how it functions proves to be intuitive for those who have the savvy capacity and patience to learn the system and its long list of features. The driver’s gauge cluster uses a large 12.3-inch LCD screen that can be configured with different views and a center information display of either the navigation map or playing media information. A clear and bright heads-up display relays pertinent information such as your speed and current speed limit as there is a camera that reads road signs. 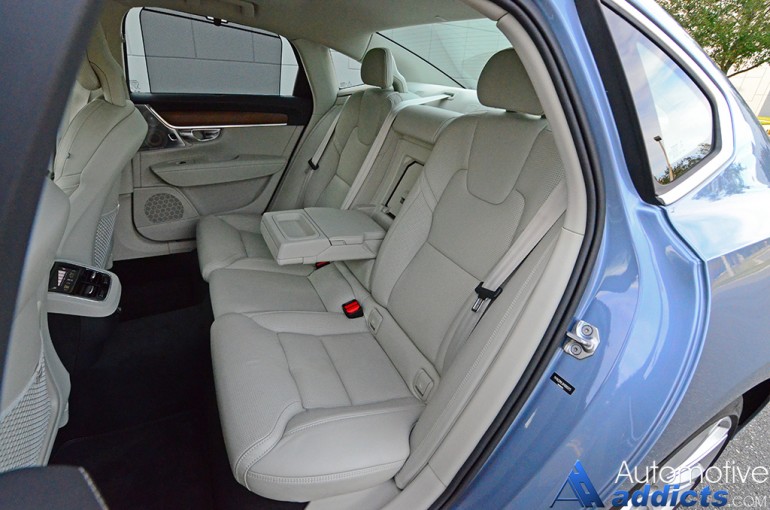 The technology is deep and plentiful in the new S90 T6 AWD Inscription, as is the abundance of active and passive safety features in true Volvo tradition. A bevy of IntelliSafe features combines Distance Alert, City Safety system, Blind Spot info system, Lane Assistance, Driver Alert Control, and Road Sign information. The S90 has a broad range of configurability in many areas. For Safety, many of the features can be turned off and you can configure items like the emergency brake to auto-activate in certain conditions, or choose to mitigate road and lane departures. Drivers of the S90 will appreciate the level of customization that Volvo has “safely” implemented, having the ability to nearly pilot itself on highways and Interstates – or take a virtual back seat when you don’t want the autonomy to be so intrusive. 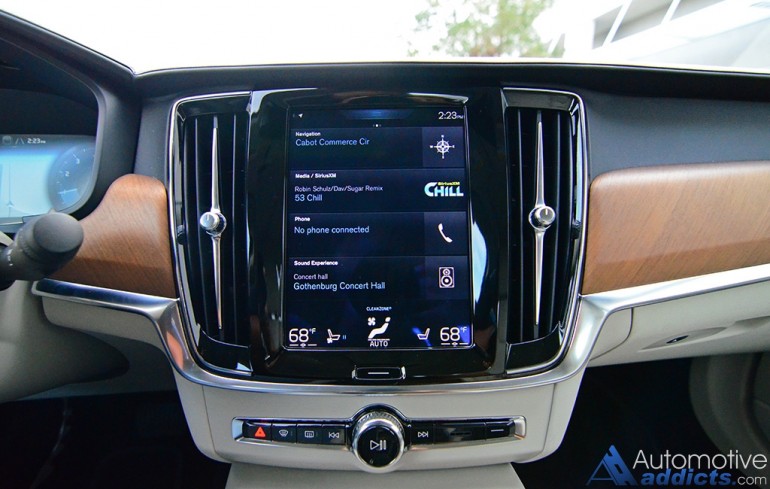 The design and styling of the new 2017 Volvo S90 departs from what was once a tradition for the brand. Long gone is the boxy nature and replaced with a new face that we will continue to see shared throughout new vehicle introductions for the brand. The use of Thor’s hammer-styled LED running lights up front captivate your eye through the concave grill up front. The roof line nearly mimics that of full-size luxury vehicles like the new Jaguar XJ, which uses smooth and subtle styling transitions as to limit the reduction of rear headroom. The rear end takes on a slightly different and unique approach with its C-styled LED taillights and widened Volvo letters encased in a chiseled power trunk lid. While there is no mistaking the S90 for being a Volvo, overall, the rather large-for-a-midsized-sedan looks better coming than going in my opinion. 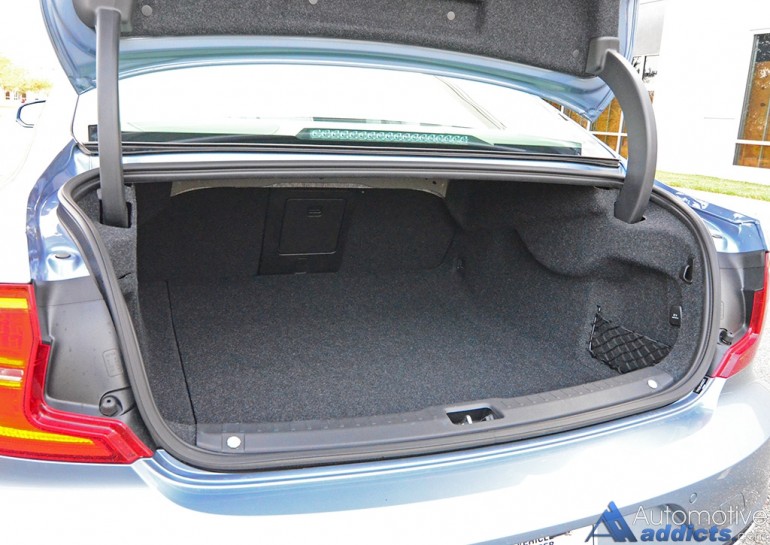 Volvo’s aggressively stated stance in the luxury spectrum has become attractive to many on several levels when you consider the all-new S90 starts at a price of $46,950 for the base T5 Momentum. From there, the price meets up with the S90’s luxury competitors when you tack on several desirable options.

My loaded up S90 T6 AWD Inscription test vehicle has an as-tested price of $66,105, including a $995 destination charge.