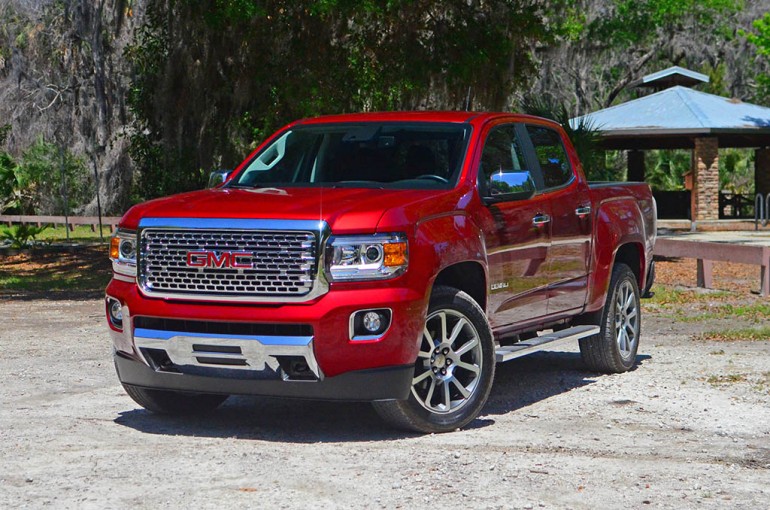 In an attempt to strive for more relevance in the modestly proportioned midsized pickup truck segment, GMC has introduced a new Denali trim level for the Canyon. With the higher trim level availability, the new Canyon Denali gives the brand a bit more outreach within those who seek vehicles that can serve multiple purposes without sacrificing the plushness and availability of luxury amenities mostly reserved for large trucks or luxury cars. 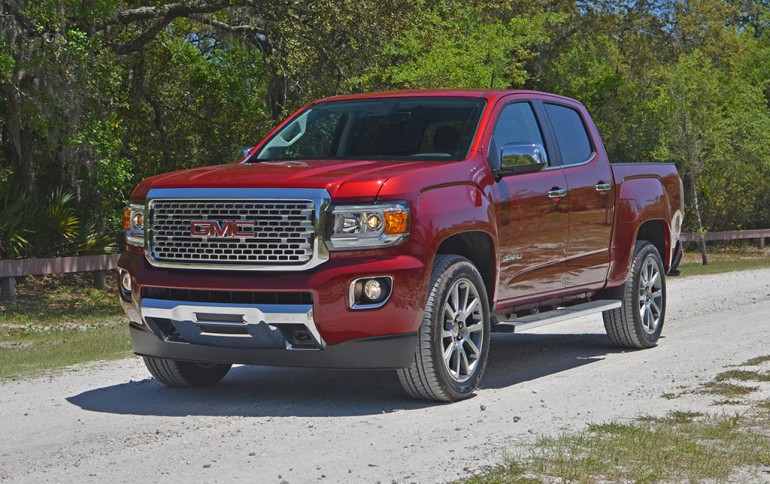 The new Canyon Denali brings forth a taste of the familiar branding communicated throughout GMC’s ‘professional grade’ marketing. Though, during my week-long escapade in the new GMC Canyon Denali, there remains to be a bit more desired in what I consider to be somewhat of a half-baked attempt to live up to the coveted Denali trim and nameplate proudly worn by the Canyon’s much larger and accommodating siblings.

GMC has done justice to bring back the Canyon, and since its reintroduction into the market in 2015, the smaller truck has proven to be a decent contender with several powertrain choices, including a Diesel engine that can also be had on the new Denali trim. For the 2017 model year, GMC brings the Denali trim to the table, but as the unfair world would have it there are a few items left off of the playing field that is expected with a name as large as “Denali.” 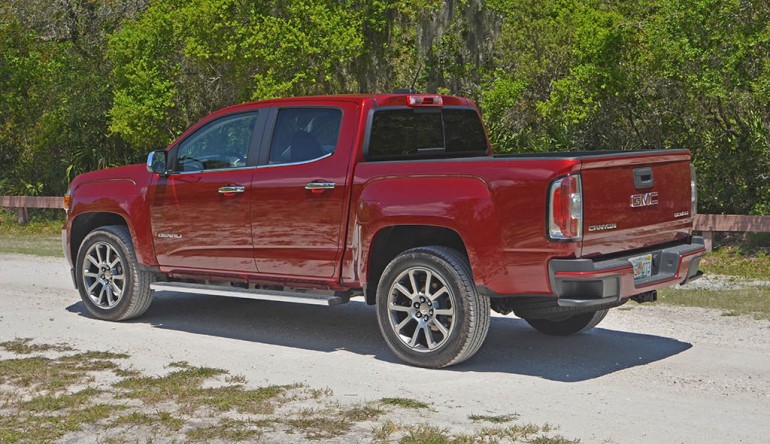 For 2017 the GMC Canyon can be optioned as a range-topping Denali trim, which adds onto the former top-level SLT trim for additional amenities. Unique to the Denali trim is a ventilated driver’s seat added onto the front seat heating, contrast stitching on the perforated leather seats, aluminum trim, heated leather-wrapped steering wheel, large 20-inch aluminum wheels, and a unique front grill that makes a statement much like the Canyon Denali’s larger Sierra Denali and Yukon Denali stablemates. 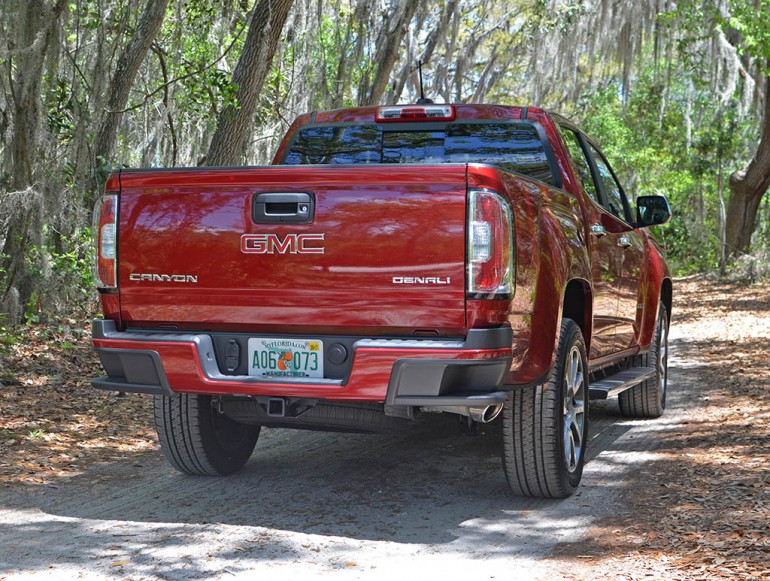 Where the new GMC Canyon Denali starts to despair for my expectations in the Denali trim are the several hard plastic areas and not much of a distinction between a loaded up Canyon SLT trim and the Denali, especially when it comes to the dashboard with the same aluminum trim and its few soft-touch areas. Fundamentally, there are several desirable options than can be had on the Canyon SLT trim to satisfy one’s appetite as the Denali trim attempts to do so. Though, part of the uniqueness remains to be the exterior style of the Denali with the polished 20-inch wheels and massively large mesh front chrome-clad grill. To the benefit of the new GMC Canyon in its top-level trims (SLT and Denali), they all exhibit a comfortable ride quality for a pickup truck and exude an effortless character for those who want to just jump in and drive. Moreover, the Denali trim adds a standard driver alert package, trailering package, black spray-on bedliner with the ‘Denali’ inscription, standard 7-speaker Bose premium audio system, standard forward collision warning, and standard lane departure warning. Again, most of the standard features on the Denali can be selected as options on the SLT trim. 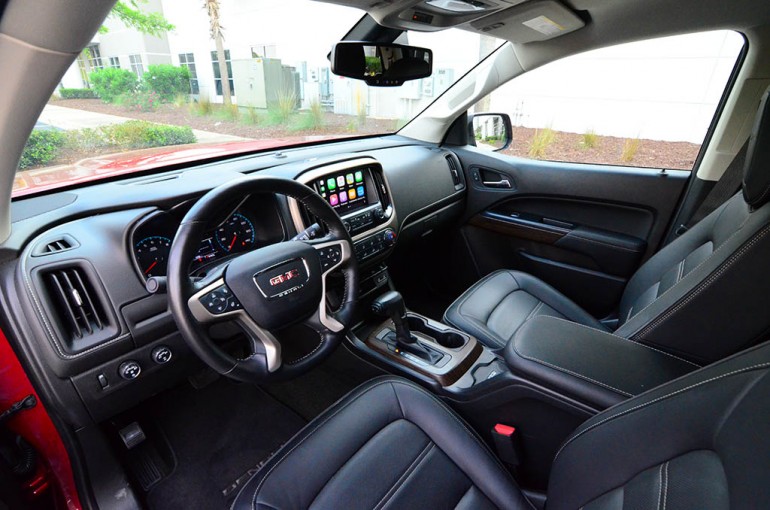 Space inside of the cabin of the Canyon Denali in the Crew Cab configuration, which can be had with either a long or short box, is plentiful and quite accommodating for my short box crew cab test vehicle. The controls are well laid out and the latest 8-inch touchscreen infotainment system with navigation is user-friendly with a wide range quick-responding menus and welcomed functions. Much of the layout of the Canyon Denali is identical to a loaded-up SLT trim with the exception of a few accents, such as the contrast stitching throughout the soft-touch areas of the dashboard, possibly adding a dash of luxury to fit the proper Denali mold. 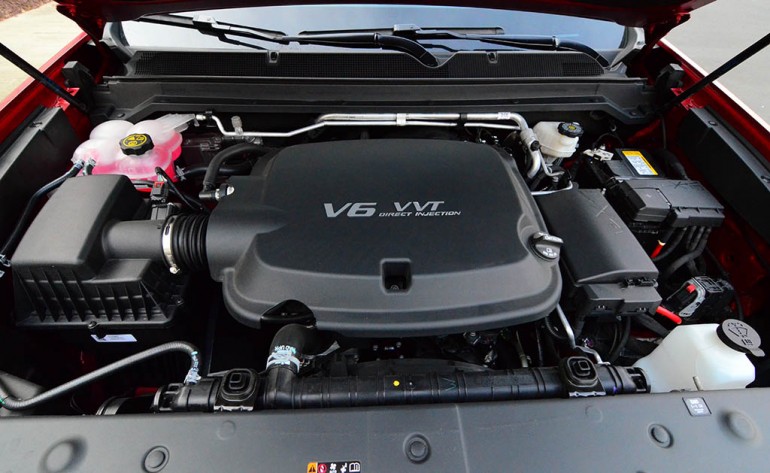 When it comes to the powertrain offerings, the new GMC Canyon excels in giving everyone just what they want starting with a somewhat efficient 2.5-liter 4-cylinder engine with 200 horsepower and 191 lb-ft of torque. From there the Canyon can be equipped with either a 2.8-liter Diesel engine with 181 horsepower and a healthy 369 lb-ft of torque. My Canyon Denali test vehicle comes with my favorite powertrain, the 3.6-liter V6 engine with 308 horsepower and 275 lb-ft of torque. The Denali trim only gets the option for the Diesel engine or the V6. New for the 2017 model year is an 8-speed automatic transmission, which the V6 gets mated to for a more adaptive range of power transmitted to all four wheels or just the two rear through the selectable drive toggle on 4WD-equipped Canyons. 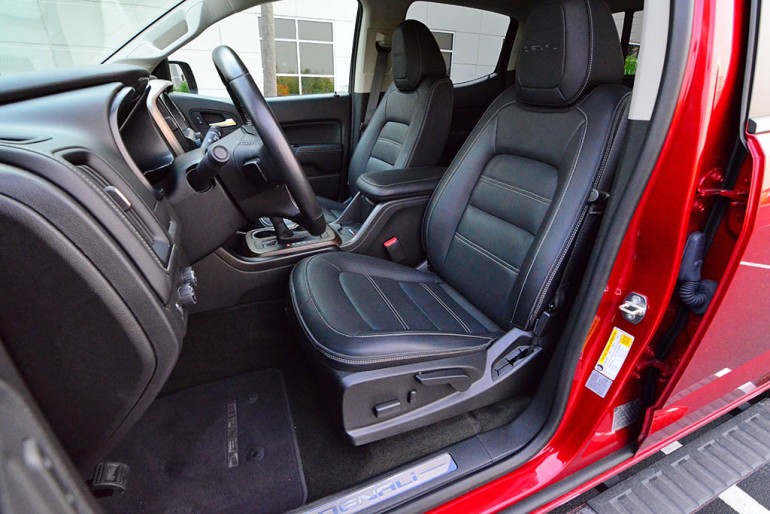 Fuel economy for the 2017 GMC Canyon Denali 4WD with the V6 engine and new 8-speed automatic transmission come in at an EPA-estimated 17 mpg city, 24 mpg highway, and 19 mpg combined. I saw a consistent average of about 21.2 mpg in mixed driving and as high as 24.7 mpg on the highway. 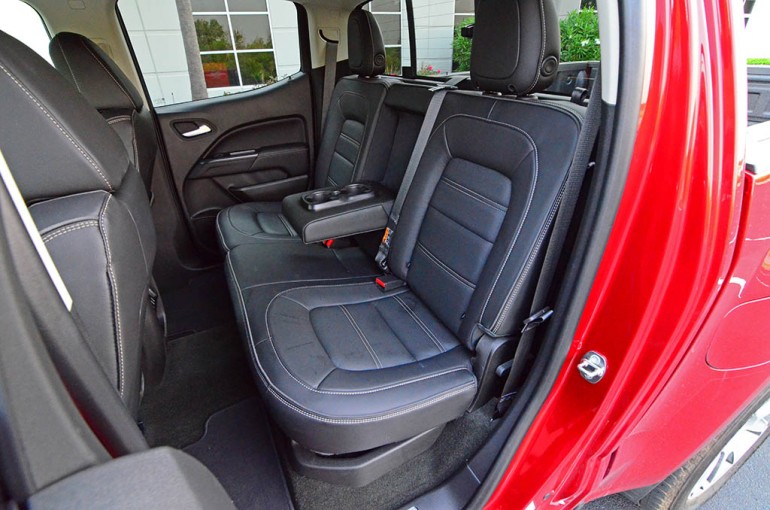 The 2017 GMC Canyon Denali is a favorable trim level at the top tier for the midsized pickup truck segment. I may even go as far as to say it’s a more agreeable choice for those who wish to make daily commutes to work when compared to the record-selling Toyota Tacoma in its higher trim levels. There is an added soft side to the new Canyon Denali that can’t be matched, and hopefully, it will pay off in the long run to garner much-needed attention when it comes to sales figures for the Canyon. Though, there is still a rugged side where the Canyon Denali 4WD V6 with the standard trailering package can tow up to 7,700 pounds or haul a few hundred pounds in the bed with ease. 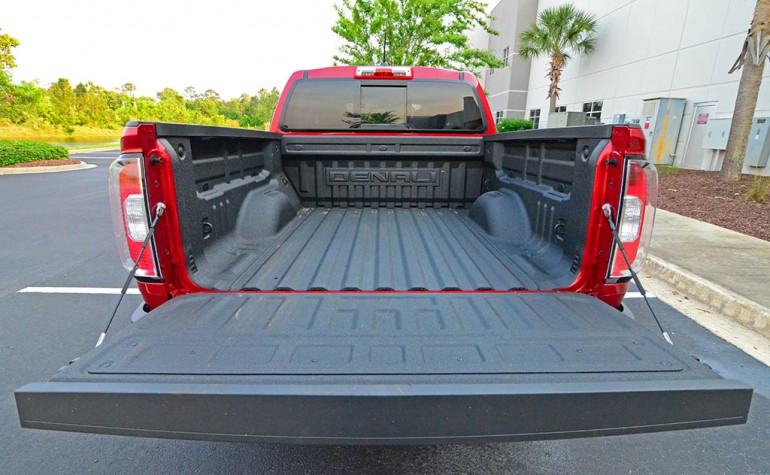 My loaded up 2017 GMC Canyon Denali 4WD test vehicle comes in at a price of $44,255, including a $940 destination charge. While the $44K price tag is far from the starting point of the new base model 4-cylinder-powered GMC Canyon SL, at just over $20,000, there is plenty of substance to justify its price. In all, it comes down to your taste in opting for the new Canyon Denali over something like a new Toyota Tacoma Double Cab Limited 4×4, which will run just over $40K. GMC’s couple added luxury features and creature comforts, which can’t be found in any other trucks in it class, may be the determining factor for some.