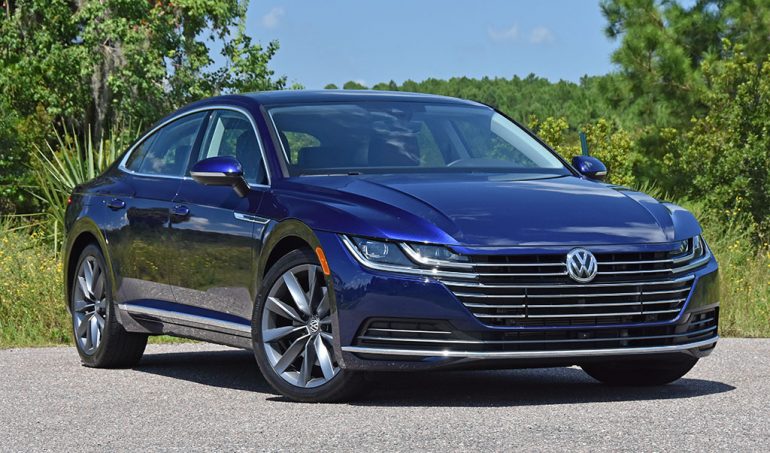 Volkswagen has somewhat remained in the shadows when it comes to their sedans in the mainstream segment. However, with the introduction of the all-new Arteon, much-needed attention has been gained within a vehicle that is poised to sit on the sedan flagship throne for the brand.

>> Get The Best Price On The Volkswagen Arteon from a network of local dealers now. <<

The all-new Volkswagen Arteon is mostly a replacement for the outgoing VW CC, a coupe-like-designed variation of the Passat. The Volkswagen CC was always a trendsetter for a bold design that captivated some on the basis of having a sedan with some added style that nearly fits the mold of what a sports coupe would fill. In comes the Arteon, a completely new style for Volkswagen that is nearly Audi-like in its design and unique flare nearly resembling the facemask of Kylo Ren from Star Wars. With such a look, the Arteon may be attractive to some but were we can agree is that it garners head turns. In my opinion, after driving the new Arteon for a week, it’s a good-looking German machine that is well-deserving for those who seek something different in the mainstream offerings of sedans that have to compete with record-selling crossover utility vehicles. 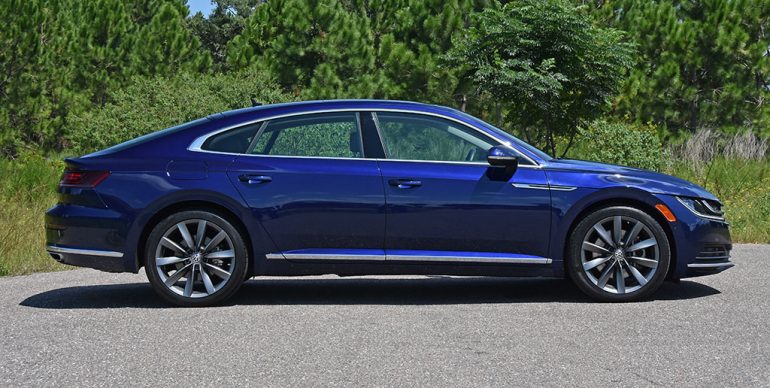 The all-new Volkswagen Arteon comes with one engine, a version of the 2.0-liter turbocharged 4-cylinder engine tuned to 268 horsepower and 258 lb-ft of torque sent through an 8-speed automatic transmission to power all four wheels through the 4Motion all-wheel-drive system. The drivetrain in itself is smooth and has a welcoming direct feel through the proven 8-speed automatic transmission. However, overall, the Arteon could use a little extra grunt off of the line as it appears to have a dash of turbo lag followed up with not much of a midrange punch that such a stunningly-designed swooping sedan deserves. In all, the Arteon looks as if it has much more substance under its low-sloping aluminum hood. Zero to 60 mph comes in around 6.6 seconds, which is good for such a sedan but doesn’t live up to the overall scope of the Arteon’s visual and sporty impression – in my opinion. 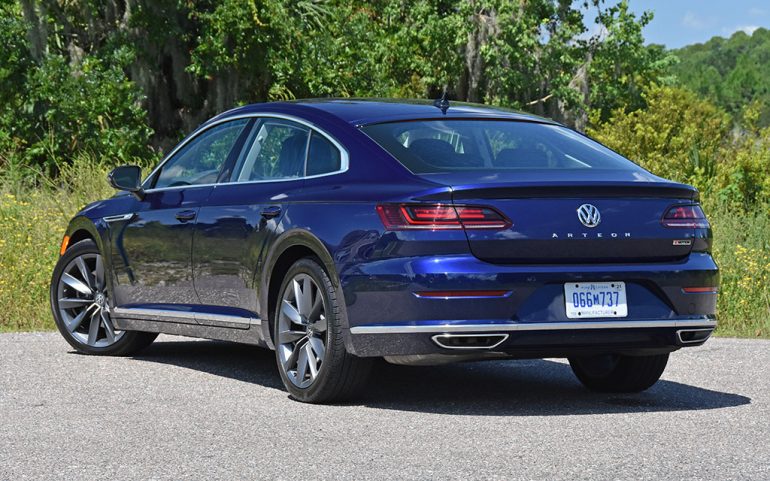 Making up for the shortcoming in power is a nicely balanced chassis. There’s even an electronic differential lock to aid the 4Motion system to provide power to where it’s needed. The Arteon out on the road is exceptionally stable and proves to inspire confidence in its handling abilities without divulging from initial comfort. The adaptive suspension dampers are nicely dialed in conforming to each drive mode with a subtle adjustment. There is even some customization of the DCC adaptive chassis control, which allows you to position an on-screen slider to your desired level of damper stiffness from the scale of comfort and then slightly past the sport setting for even stiffer dampening over the default sport mode. Such a setting is claimed to give the driver a more direct connection between the driver and the road. Does it pull off such an act? In a way, yes. While the steering feel is direct and mostly precise, it does not provide much feedback from the road. The nicely sized 19-inch wheels of my test vehicle with low profile tires do a good job of adding to the stability of the Arteon while the suspension soaks up road imperfections and those that may be exacerbated by the stiff sidewalls of the tires. 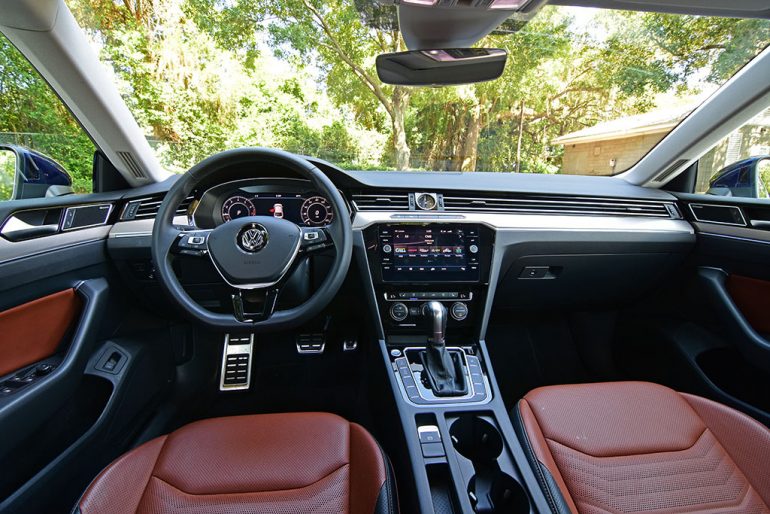 Fuel economy for the new Arteon, I thought, would be much better than stated on paper getting 20 mpg city, 27 mpg highway, and 23 mpg combined. To my surprise, real-world figures during my time with the Arteon were a little better than the EPA numbers at times. Overall, with mixed city and highway driving, I came away with 24.6 mpg. 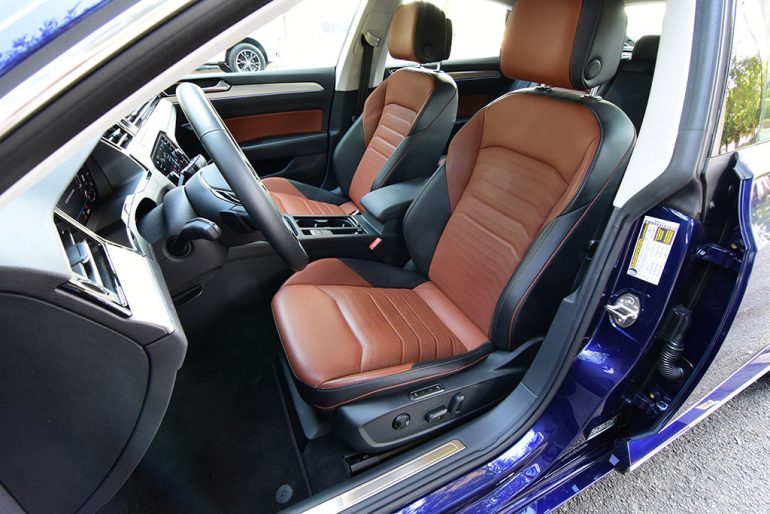 The interior of the Arteon doesn’t quite live up to the stunning premium-clad exterior in some ways. The interior is almost luxurious with some Audi-esq traits as the exterior pulls off an amazing act to fit the part of a luxury sedan. Inside, the dashboard is mostly soft-touch with aluminum trim as are most of the door trim areas. The virtual cockpit instrument cluster, a page nearly taken out of the Audi book, is a nice component where you can view your navigation mapping in the center with the two virtual gauges to your left and right. The 8-inch infotainment unit is a welcomed charm taken from the VW family that continues to provide a user-friendly experience with quick-to-respond controls and seamless integration of Apple CarPlay and Android auto. The Dynaudio premium sound system is strong and provides a clear concept of sound throughout the cabin. The seating areas are comfortable with ventilation and heating upfront with a light lumbar-area massage feature for the driver’s seat. The front seats are very supportive as well with some light bolstering. Out back, I was surprised to find enough room for me to sit with me being 6 feet 3 inches tall. 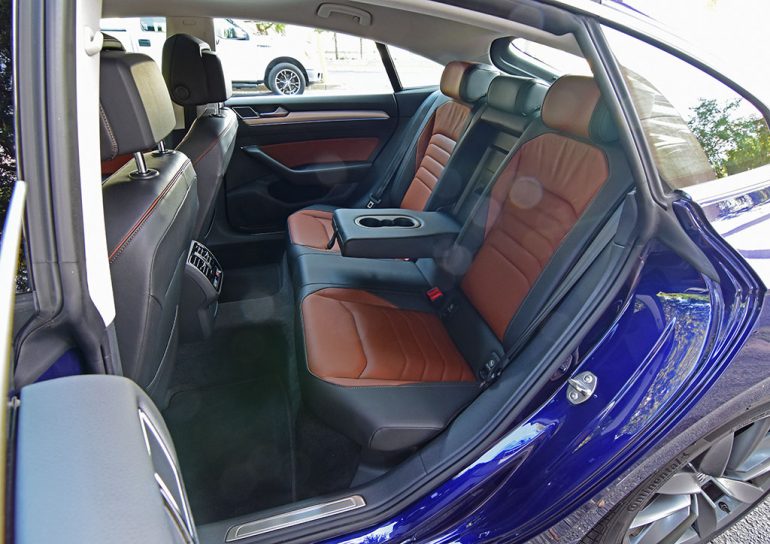 The cargo area of the Arteon, another one of its up-the-sleeve tricks, is in a hatchback form that opens up to an enormous 27 cubic feet of space with the rear setbacks all accessed by a large-opening power liftgate. Having so much space in such a stunning package is all the more reason to give the Arteon a deserving look. 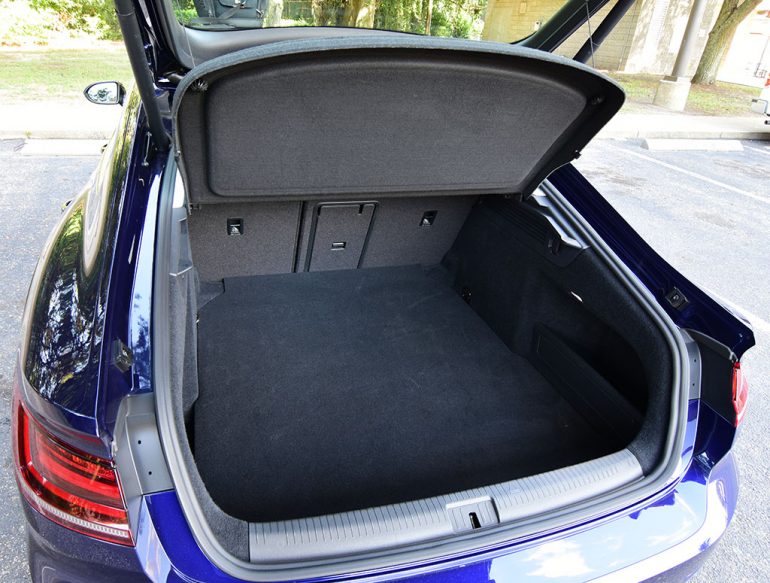 In the full scope of what the Arteon offers up, one can almost justify my test vehicle’s price of $45,940. In such a world at the time where crossover utility vehicles are attractive buys, the Arteon’s sole downfall may reside on its value perception, and that’s a shame because it’s such a lovely vehicle – the best sedan that Volkswagen currently offers. 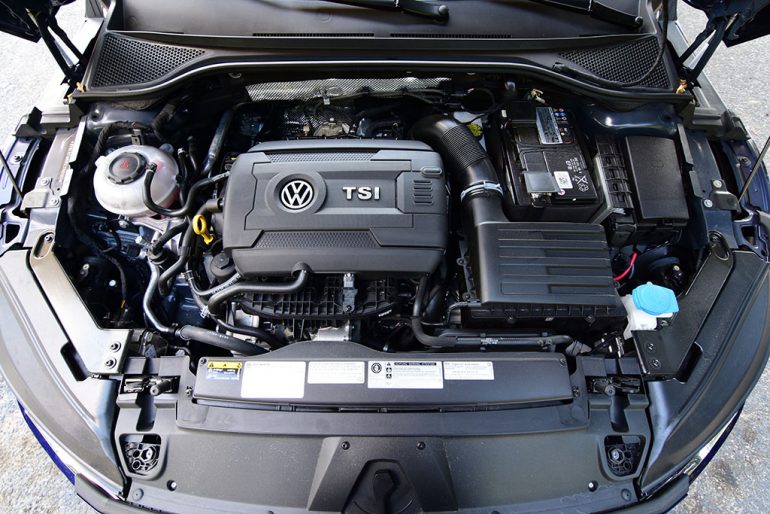 >> Get The Best Price On The Volkswagen Arteon from a network of local dealers now. <<