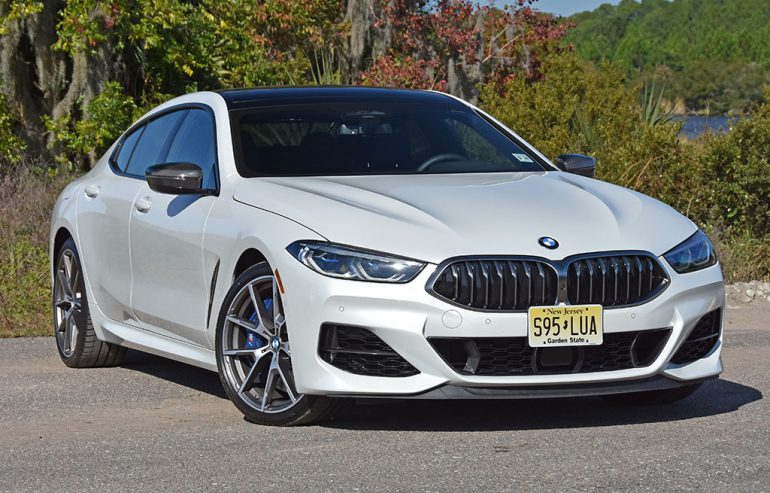 While the automotive market certainly has some big changes on the horizon, the current state of vehicles never ceases to amaze me with staggering horsepower numbers and stunning designs that even captivate the less enthused. BMW happens to be a brand that gets deserving attention in more ways than one. Strapping behind the wheel of something like the new M850i Gran Coupe gets your heart pumping yet appeals to a majority with a sense of style being a uniquely designed sloped roof 4-door version of the new 8 Series.

The all-new 2020 M850i Gran Coupe is something to behold that BMW brings to the market as a rarity in its design. The unique style is that of a coupe-like look but has four frameless windowed doors, reminiscent of the old 6 Series Gran Coupe or taking up space in a segment once pioneered by the Mercedes-Benz CLS. Such a style plays on the typical design aesthetics of a coupe (2-door vehicle) but makes way for a longer wheelbase to fit all four doors. With that, BMW’s M850i is transformed from its two-door glory into an appealing vehicle that can seat five with back seats that are actually usable for adults due to a surprising amount of legroom. The driving dynamics of the M850i Gran Coupe stay true to what the new M850i Coupe is all about with its thrashingly powerful 4.4-liter twin-turbo engine that is good for 523 horsepower and 553 lb-ft of torque that sends power to an 8-speed automatic transmission and the latest xDrive all-wheel-drive system to power all four wheels. 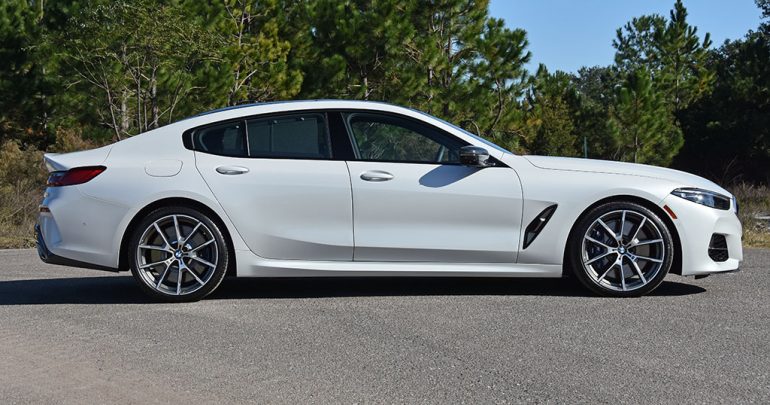 The 8 Series Gran Coupe is certainly a different animal in its extreme design. Most of the body lines contour and bend to nearly half circles to form bulging-sculpted doors. The roof is a smooth, uninterrupted curve from the lower windshield that doesn’t end until the power-opening and closing duck-billed trunk lid concludes. The M850i Gran Coupe is a stunner and looks the part to match its surprising sportscar-like performance.

In all of the glory of BMW’s widely used twin-turbo V8 engine, the M850i Gran Coupe is no different in that it takes advantage of a powertrain that feels much more powerful than its numbers state on paper. In fact, being able to go from zero to sixty in 3.8 seconds in my tests, the M850i Gran Coupe is nearly true “M” material. While most shouldn’t get the “M” lettering at the beginning of the M850i Gran Coupe’s model signification confused with the real-deal M cars – like it’s M5 or M6 Gran Coupe brethren with 600 or more horsepower – the “M” is more for it being a Motorsport-inspired vehicle that comes standard with what we used to define as an M Sport package. Such a standard setup in the M850i Gran Coupe features better brakes, an M Sport differential, special 20-inch M wheels wrapped with performance tires, and specialized Adaptive dampers as part of the Adaptive M Suspension Pro feature. In all, the M850i Gran Coupe comes as a complete package for being the most aggressive 4-door-coupe in the BMW lineup unless you spring for the forthcoming M8 Gran Coupe (due out in Spring of 2020). 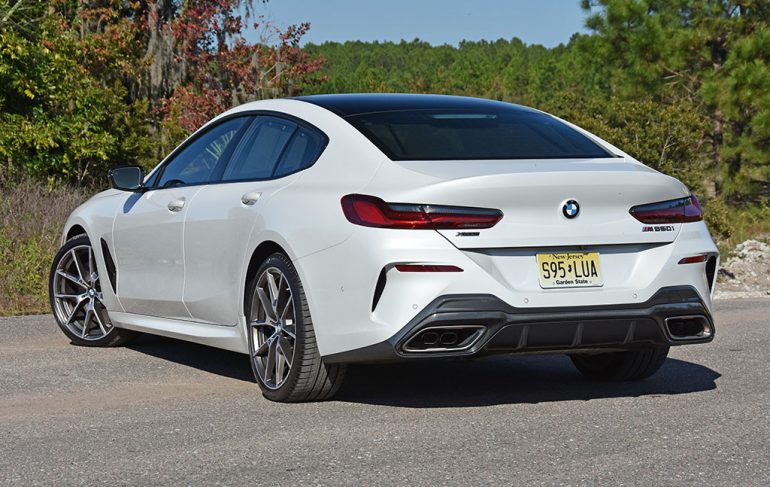 The way the M850i Gran Coupe drives makes you almost forget that you have four doors, which is probably part of BMW’s mission in developing such a unique vehicle. After having the new 8 Series convertible in for a full review, it’s comforting to see BMW utilize such a dynamic offering and expand upon it for better versatility to tote more passengers in style and comfort without sacrificing much of its stunning coupe-like looks. 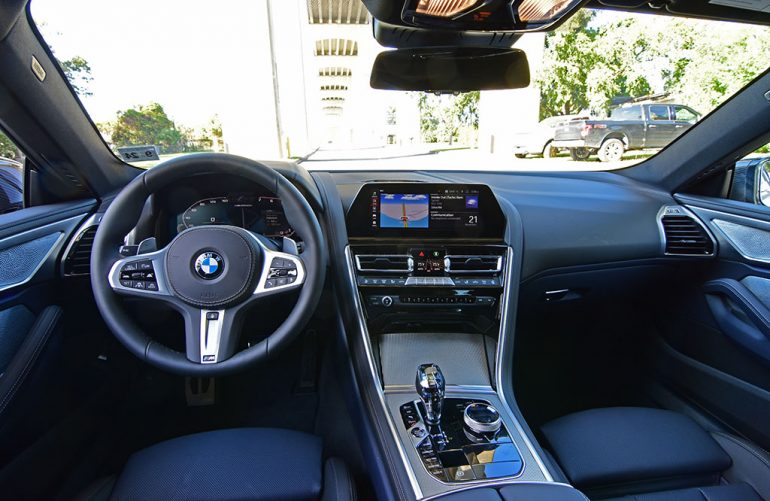 Inside of the new M850i Gran Coupe is a familiar cabin for BMW fans, which is a good thing considering the new design language that features a well-thought-out set of controls and the best-ever iteration of iDrive in my opinion. After becoming acclimated to the new iDrive system and its large 12.3-inch touch screen, I tend to enjoy the integration and seamless response of each and every control that you input, by either touching the screen, using the iDrive controller, or interacting with the advanced voice feature that now takes a stab at using more natural language recognition by simply saying “Hey BMW” (somewhat like how Mercedes-Benz does their “Hey Mercedes”). 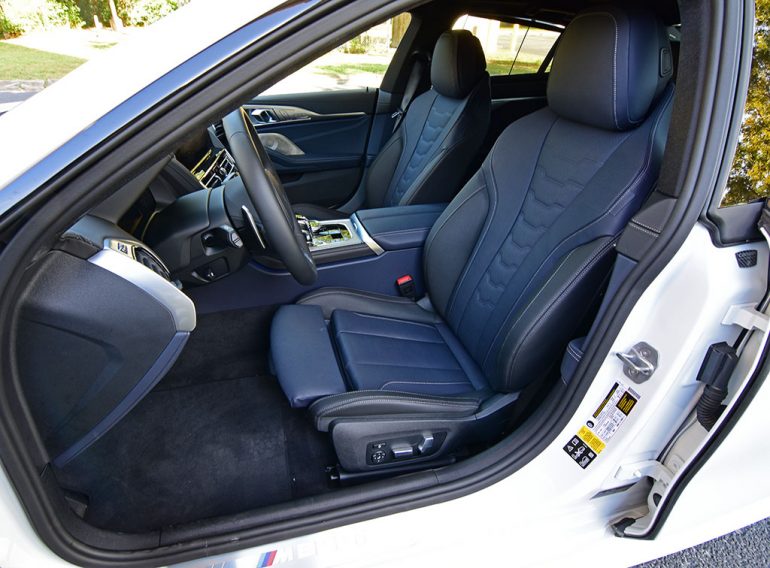 The more stunning aspects of the BMW M850i Gran Coupe’s interior is the subtilty contrasted leather colors and inserts on the sporty but comfy seats. Even sitting in the back is a delightful experience, especially considering I can actually fit in the back with my 6-foot-plus frame and long legs. The only complaint is the ingress and egress of the vehicle, where I may have bumped my head a few times and somewhat struggled to get past the B-pillar with my seat adjustment. Otherwise, the cabin of the M850i Gran Coupe is quite inviting. 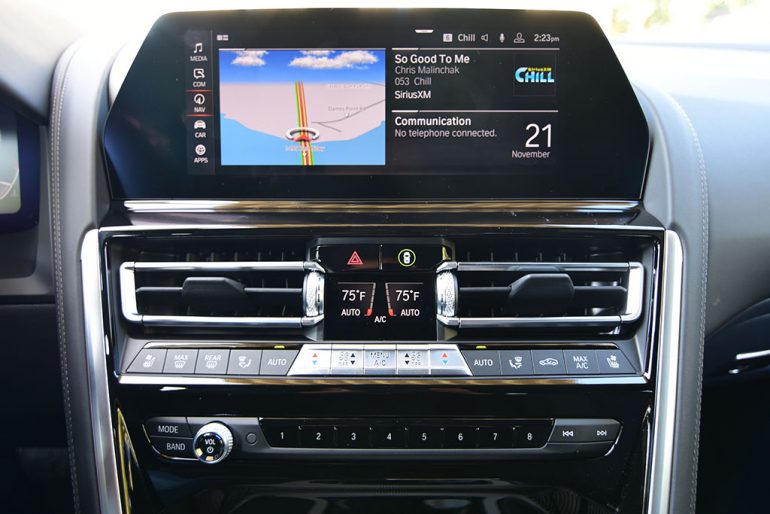 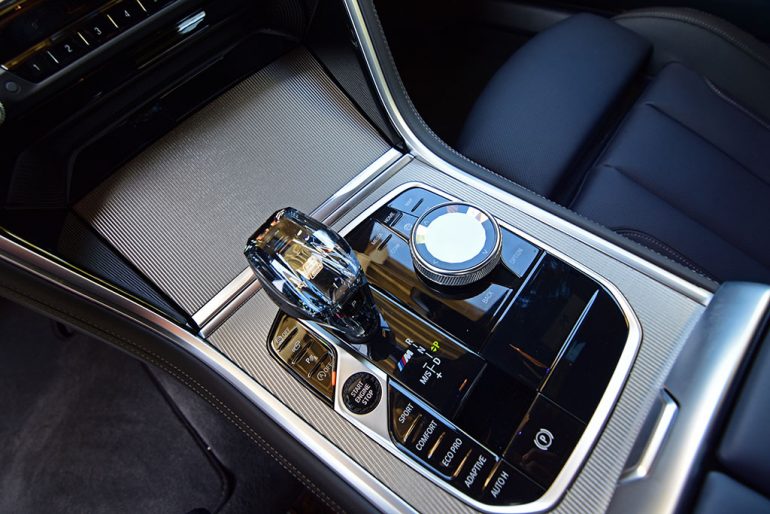 Performance has always been a forte for BMW, and the M850i Gran Coupe is nothing short of such. The Integral Active Steering, which steers the rear wheels a few degrees to the opposite turning angle at low speeds, virtually shortens the wheelbase making maneuvering parking lots an almost thoughtless act. The ample power from the turbocharged V8 and the follow-up of the rumbling exhaust with three different sound modes is always assuring that you own the road that you travel. The 8-speed transmission, that fires off seamless and direct shifts, is always in the proper cog and puts power down without any apparent slipping of the torque converter. The plushness of the M850i Gran Coupe only shows its face with the abundance of leather wrapping throughout the interior and the somewhat oddly soft feeling of the suspension in both Comfort and the many Sport driving modes. I found that the softness of the suspension was an oddity but didn’t upset the balance and ability to feel confident with the elongated 8 Series chassis. 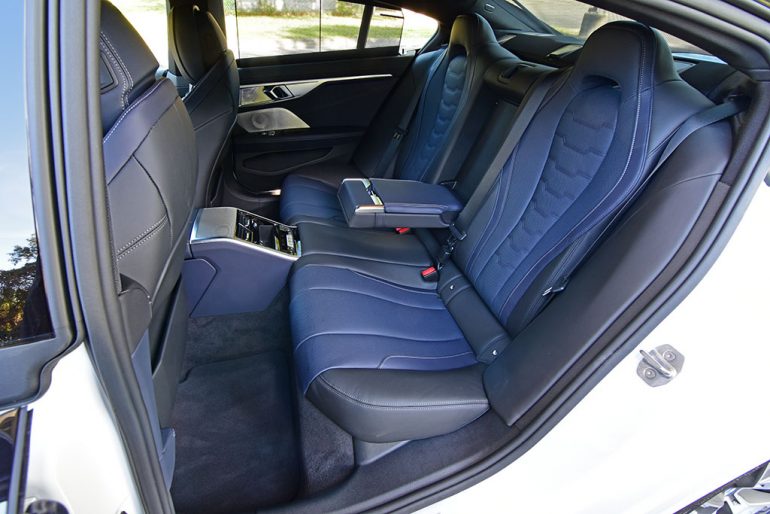 On the front of economy, the M850i Gran Coupe is mostly consistent to get its stated 17 mpg city, 25 mpg highway, and 20 mpg combined. Of course, with such a vehicle, no one is really going to pay much attention to the fuel economy after laying down $121,695 for my loaded-up test vehicle. 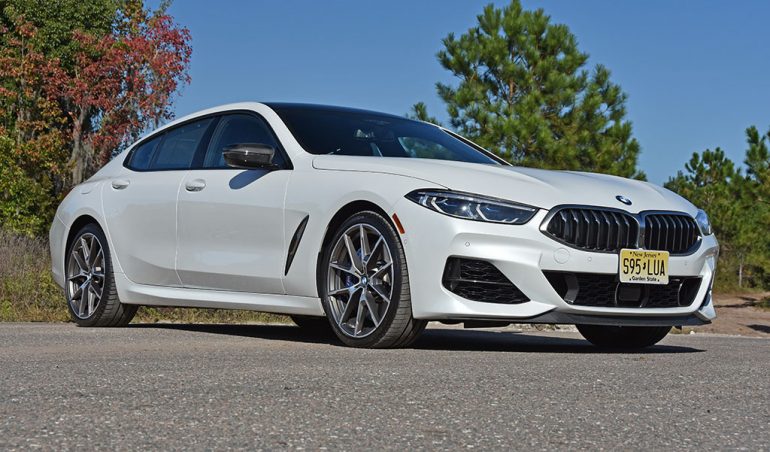 Six figures is what you will pay for the V8 version of the 8 Series Gran Coupe, unless you literally slow things down and opt for the 840i Gran Coupe, which starts at just $85,895, touting the 335-horsepower turbocharged inline-six-cylinder engine and the same good looks that you see in my test vehicle. I’m all for splurging here, go for the gold with the M850i Gran Coupe if the soon-to-come full Monty M8 Gran Coupe is too much in terms of power (600hp or 617hp Competition model) and price starting around an estimated $130K.