The Genesis G70 has ensured its future classic status for a very good reason. It’s out to fight the Audi A4, BMW 3-Series, Mercedes C-Class, and it’s the only one in this group still available with a manual transmission.

The appeal here is quite personal to me in the Future Classic file. Recently, I went looking for a first-generation BMW 7-Series with a five-speed stick. It would have been absolutely easier to look for a 3 or 5-Series from this era with a manual, but the E23 just had the attractiveness of added driver fun built into a grand touring size. I found the right example 2,600 miles away, and the comfortable and engaging sedan did not disappoint on the long journey home.

This Genesis seems to carry on that spirit. The shifting is somewhat uneventful with a simple and forgiving operation. It offers hints of row-your-own fun without jeopardizing its everyday nature, and that’s becoming a rarity today. There are hardcore cars from BMW that still offer a stick-shift, but their comfortable upper-middle class examples are no longer available with a manual transmission. Alternatively, the Genesis G70 only offers its six-speed on the lower spec motor and less expensive rear-wheel drive setup.

A base Genesis G70 with the automatic costs $36,475, and the three-pedal version is $39,525. On the surface, it appears like Genesis is charging over $3k more to get a manual transmission. That seems odd considering stick-shifts were once called “standards” partially because everyone had to pay extra for the automatics. But there’s more going on here.

The eight-speed auto version has four trim levels that can add as much as $10k in options. The six-speed manual has no additional packages available. Instead, it comes with a selection of items from the higher tiers, like the upgraded audio system, Brembo brakes, and larger 19-inch wheels on grippy tires. This no-choice menu is a reflection of the low demand a manual transmission is going to have. Genesis is just packaging some of the sportiest features, because they’re the ones the six-speed buyers already want. Since this is a small pool of consumers, it’s best to try and satisfy all with one rather than have some mismatched cars lingering on dealer lots.

If only a small group of stick-shift buyers are expected, why offer one in the first place?

First, low demand doesn’t mean zero demand. Second, it’s instant street cred. Genesis is offering a very BMW-like feature that BMW doesn’t even offer anymore in this size and price class. The manual makes the G70 more endearing to enthusiasts, and in turn, even people with automatics will occasionally get a nod of respect from those who own leather driving gloves.

The six-speed stick sets a nice tone for the G70, and in the future, a classic car is an excellent investment – there are going to be classic car fans like me who will be looking for this hidden gem. 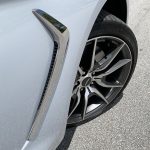