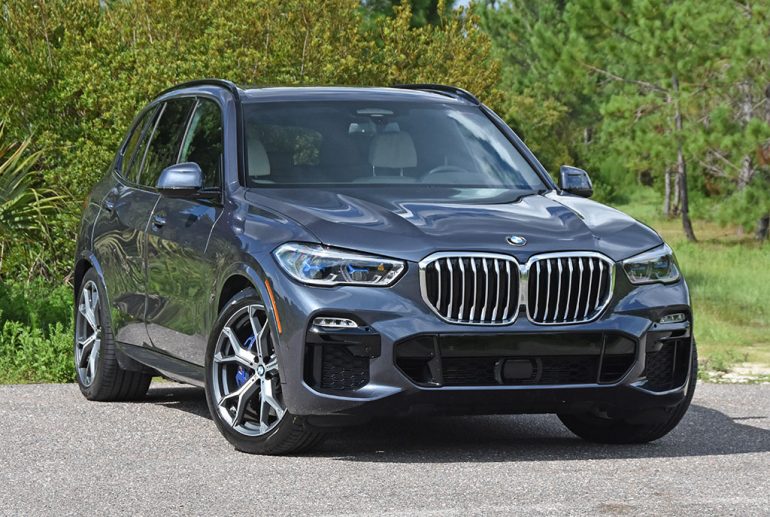 Currently, there’s much confusion to go around as we dive into uncharted waters in the world of Electric Vehicles (EVs), hybrids, and plug-in hybrids. While the American public treads water with the barrage of new information as manufacturers move towards EVs, we must all brace and prepare ourselves for the inevitable storm of EVs to blanket the market in the coming years. In the calm before the storm, we get hybrids and plug-in hybrid vehicles taking a small page from both forthcoming EVs and current gas-powered vehicles, like the latest BMW X5 xDrive45e that I had a chance to experience this week.

The new BMW X5 is already a welcomed vehicle that I’ve grown to respect with its rather tall stature making it accommodating for tall people in addition to serving up remarkable performance figures throughout the lineup. In getting into the new plug-in hybrid trim, the xDrive45e, it slots in between the 335-horsepower xDrive40i turbo inline-6-cylinder-powered X5 and the 523-horsepower turbocharged V8 M50i trim. While there was an outgoing X5 xDrive40e plug-in hybrid that I had mixed feelings about, the new xDrive45e plug-in hybrid seems to be more of an enjoyable experience in the area of performance. 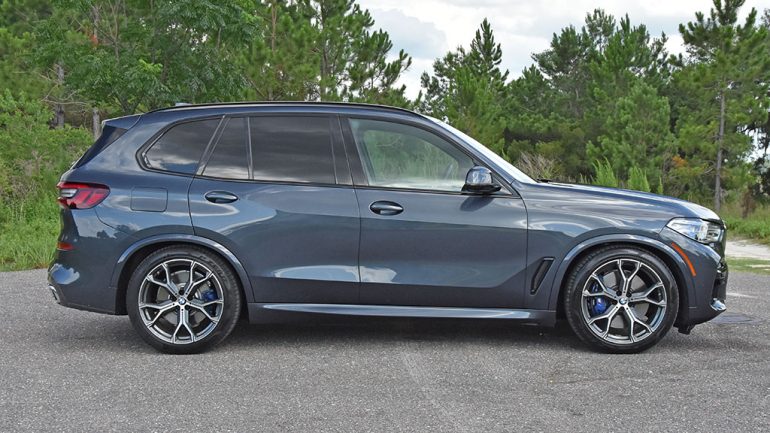 Surprisingly, the new X5 plug-in hybrid has about the same performance figures as its gas-powered xDrive40i sibling, which is a direct reflection on the plug-in hybrid having to carry around extra weight despite it having slightly larger power numbers at a total of 389 horsepower and 443 pound-feet of torque over the current gas-powered xDrive40i’s 335 horsepower and 331 pound-feet of torque that sports a mild hybrid system. The weight differences are huge with the X5 45e coming in at 5,672 pounds and the 40i tipping the scale at 4,863 pounds, which is a difference of 809 pounds. 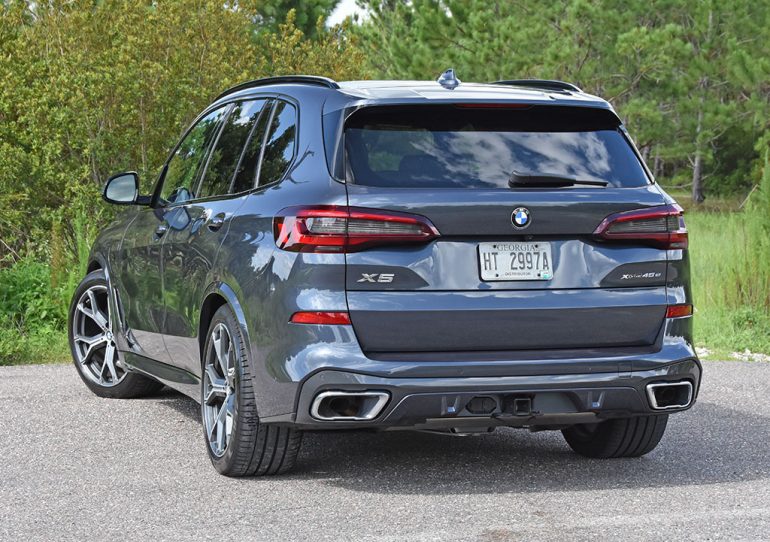 The X5 45e plug-in hybrid’s engine by itself makes 282 horsepower but has a rather robust electric motor to give it the combined 389 horsepower and 443 lb-ft of torque, which is sent to all four wheels via the advanced xDrive system. The electric motor has 111 horsepower and 192 pound-feet of torque on its own that you experience in the fully electric drive mode, which feels “okay” immediately off of the line from a standstill but requires some planning to keep pace once you’re out on the road. Using electric mode, the X5 45e will hit 60 mph from a stop in about 17 seconds – not exactly zippy here. However, that power is manageable and can easily get you around town on local roads and even keep pace on the highway until you reach its max electric mode speed of 84 mph. The benefit of the electric motor keeping pace is thanks to the 8-speed automatic transmission that both it and the gas engine will use to make best use of the spinning inertia of the electric motor or the gas engine and motor working in sync. Deceleration is somewhat aggressive when letting off of the gas for regenerating energy and the start of regenerative braking allowing you to almost use it as a brake – but not as aggressive as something like any new Tesla. Braking is surprisingly good and has a smooth transition from regenerative braking and use of the large M Sport Package friction brakes. 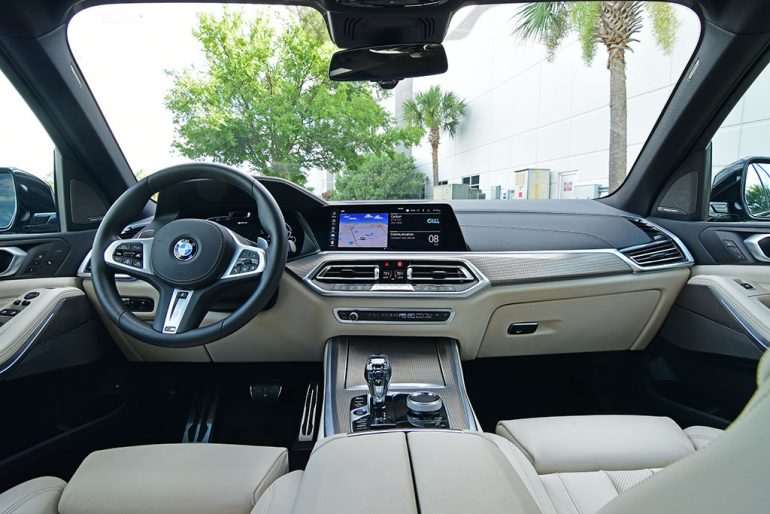 With the default hybrid drive mode enabled, the X5 xDrive45e will hit 60 mph almost as fast as the xDrive40i’s 4.7 seconds, which by the way, is quicker than most of the X5 plug-in hybrid’s competition. I was able to repeatedly best BMW’s estimate of 5.3 seconds to 60 mph hitting the best time of 4.9 seconds. 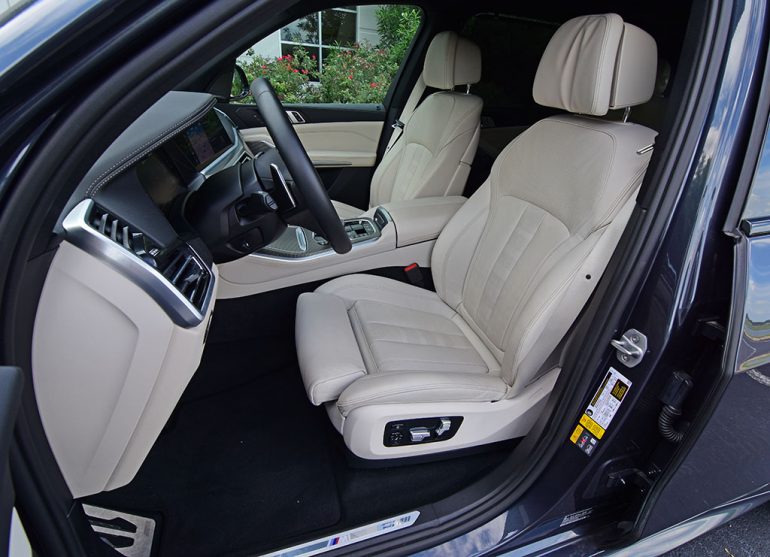 Getting down the range and where the X5 45e excels as a plug-in hybrid is its 31-mile EPA-estimated electric range, which is also something that I feel is underrated considering I was able to muster out about 34 miles of electric-only range. Fully charging the new larger 24 kWh (17.1 kWh usable) lithium-ion battery pack from full depletion takes a “full-day” if you’re using your home 110-volt wall plug, which was well over 10 hours from what I monitored. If you have a rapid level 2 charger, you’re looking at four to five and a half hours to charge taking advantage of the built-in 3.7 kW charger. 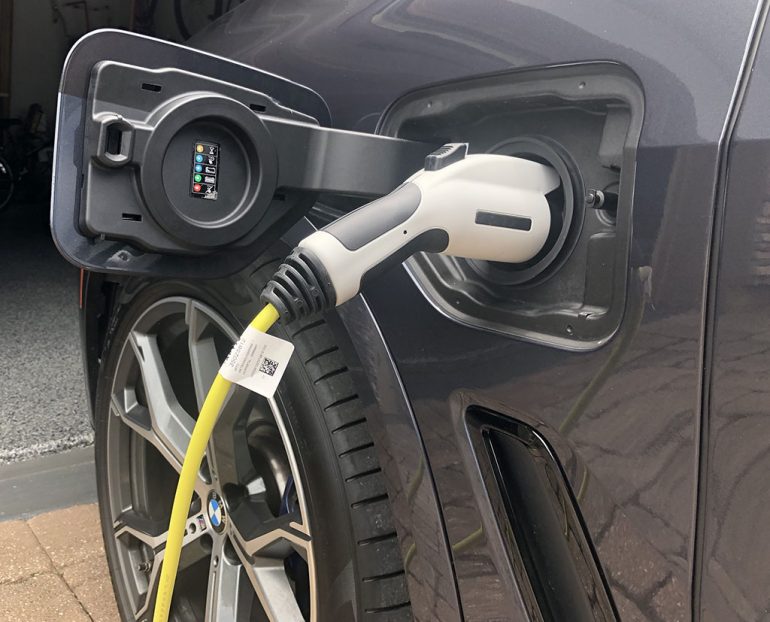 The advantages of the X5 xDrive45e plug-in hybrid aren’t experienced until you actually plug it in and charge its battery. If you were to leave the battery depleted and drive around town you won’t be expected to get fuel economy figures any better than the gas-powered X5 xDrive40i, which gets a combined 25 mpg. Charge up the battery in my X5 45e and you’ll easily obtain the EPA-estimated 50MPGe figure for a full tank of gas and a total range of about 400 miles. If you go gas only with a depleted battery, expect an average return of about 20 mpg. 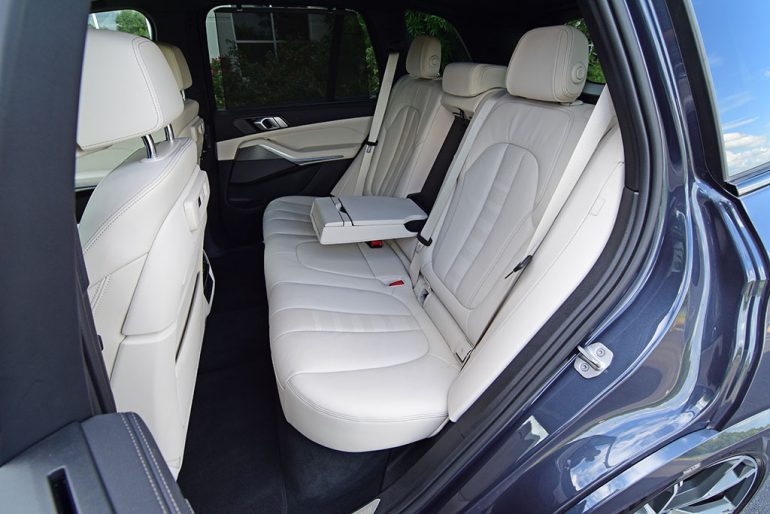 There is a feature on the X5 plug-in hybrid that permits the gas engine to charge the battery or retain a certain battery level for those times you may feel you want to run electric power only when you reach a certain destination. Use of this feature is beneficial when you feel that you can better use the electric motor power, such as in on a backroad or township area that doesn’t have as much impatient traffic wondering why you aren’t accelerating quickly to get out of their way. 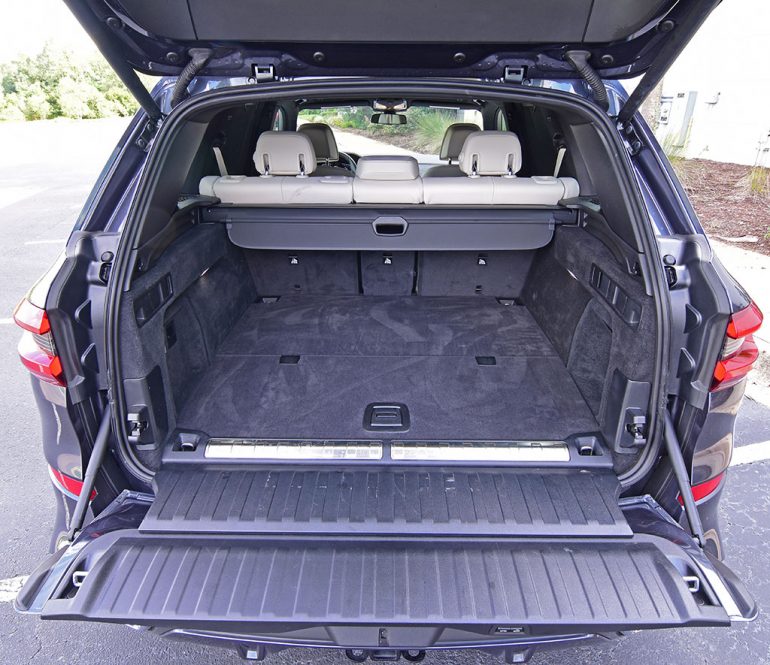 Having the X5 xDrive45e plug-in hybrid equipped with the M Sport Package with the 21-inch wheels and massively wide 315/45R-21 rear tires first seemed like an oxymoron on a “hybrid” but the more time spent with the loaded-up test vehicle I better understood its purpose. The X5 hybrid is more of a conscious decision to take advantage of its advanced plug-in hybrid tech and actually charge it up at night for a full 30-plus miles of electric range. Moreover, having the respectable performance at bay to use if you ever hit the throttle to enable to kick-down switch and fire up the gas engine if you’re rolling in electric mode, there’s a lot to appreciate of the 5600-pound Bavarian utility vehicle getting out of the way of itself and performing quite spirited. Fundamentally, the X5 plug-in hybrid is no slouch and can be surprising at times with the little bit of instant torque the electric motor musters. In all, the X5 45e is one of the most undercover hybrids you’ll find outside of something like a Porsche 918 or McLaren P1, which are supercars that both utilize plug-in hybrid technology. With its adjustable height air suspension and 21-inch wheels, the X5 45e looks the proper part of a performance crossover, and it is in some ways. 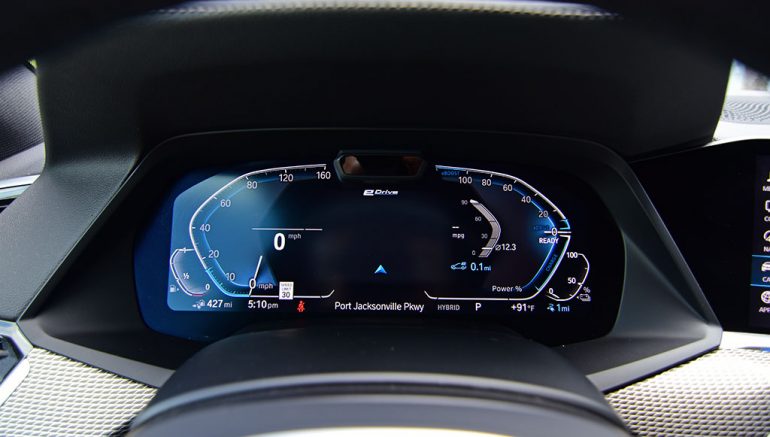 A big part of appreciating the new BMW X5 45e is the way the control systems and advanced engineering make the driving experience a seamless endeavor. Basically, the powertrain is smooth and isn’t the least bit choppy for its electric motor to gas engine transitions. Additionally, the overall feel of the X5 45e is on par with its gas-powered siblings but giving the drive a little more information as to how hard you can push the electric mode or hybrid drive modes to take full advantage of the remaining battery power. The readouts through the 12.3-inch gauge cluster are innovative and they make sense after a slight learning curve. All else about the interior is what I’ve grown to love in my previous reviews of the BMW X5, welcoming the latest iteration of the iDrive system and its redundancy of controls through the 12.3-inch touchscreen and iDrive controller. Wireless Apple CarPlay along with the configurable gesture controls continue to be welcomed features as well when the gesture control doesn’t mistake your hand motions for changing your SiriusXM stations. Luckily, you can easily disable the optional gesture control feature. 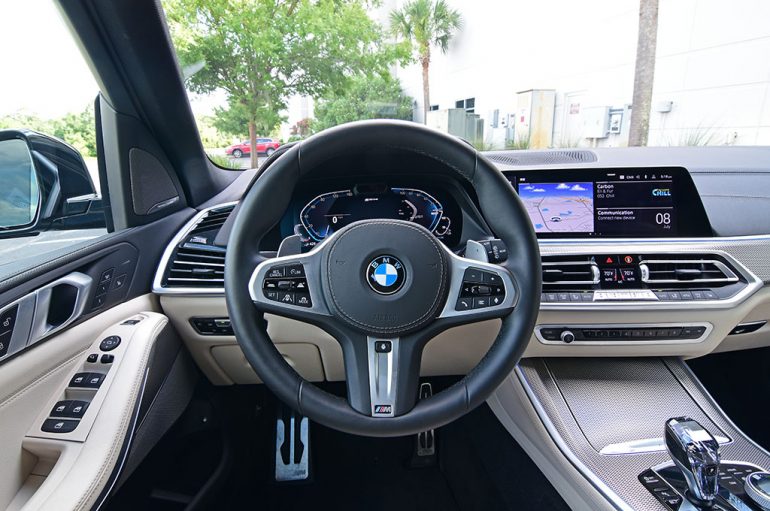 While the new 2021 BMW X5 xDrive45e plug-in hybrid isn’t going to exactly win in any fuel consumption wars, it will permit some extra savings at the pump if you purposely make use of a charged battery while enjoying all that is praised in the midsized X5 for a price out the door of my nearly loaded test vehicle at $81,695 but most may pay a lot less after factoring in up to a $7,500 federal tax credit potentially making it the least expensive all-wheel-drive X5 you can get if you purchase the vehicle versus leasing it.