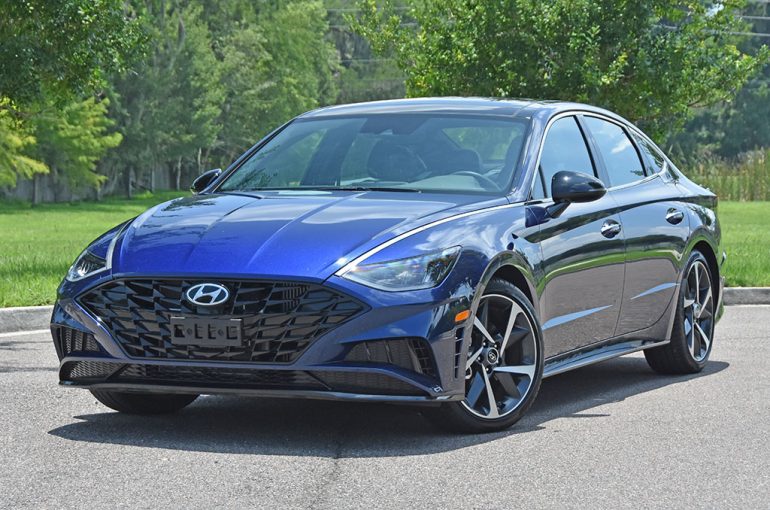 Marking its seventh generation with a redesign for the 2020 model year, the Hyundai Sonata has proven to be a commonality within the automotive landscape in America when it comes to a midsized mainstream sedan. For the 2021 model year, the Sonata remains mostly unchanged except for a new N Line model that ups the performance with a new 2.5-liter turbocharged engine capable of 290 horsepower and 311 lb-ft of torque.

For those who aren’t interested in the extra literal boost of performance from the new Sonata N Line, there’s the decently equipped Sonata SEL Plus that I had a chance to check out for a week with the middle-of-the-row 1.6-liter turbocharged 4-cylinder engine choice. 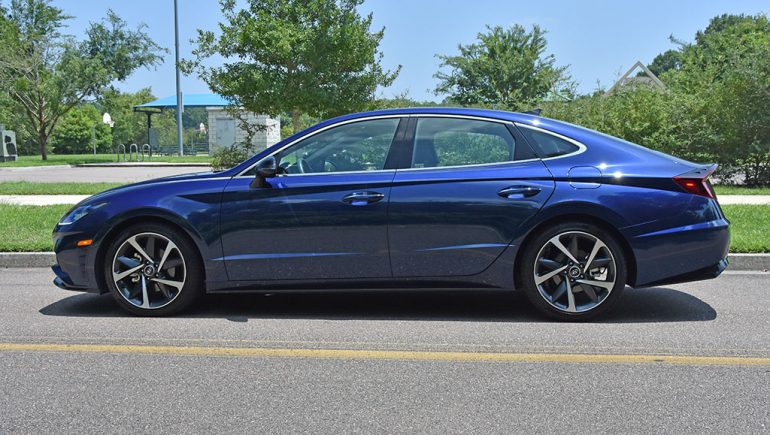 Powered by the brand’s 1.6-liter turbo 4-cylinder, the new Sonata SEL Plus is the sweet spot for value in a vehicle that has just about everything that mainstream buyers would seek except for a few amenities that I welcomed in the upper-level Sonata Limited that I reviewed last year. The engine in both vehicles, touting 180 horsepower and 195 lb-ft of torque gets the job done to put efficiency at the forefront with a small dash of performance. The Sonata SEL Plus isn’t going to win many races but it is mostly on par with other 4-cylinder base-model competition. You can hit 60 mph from a stop in just over 8 seconds, which again, isn’t going to thrill anyone but it proves to be a consistent pull of power from its front wheels. Power is sent through a decent 8-speed automatic transmission. 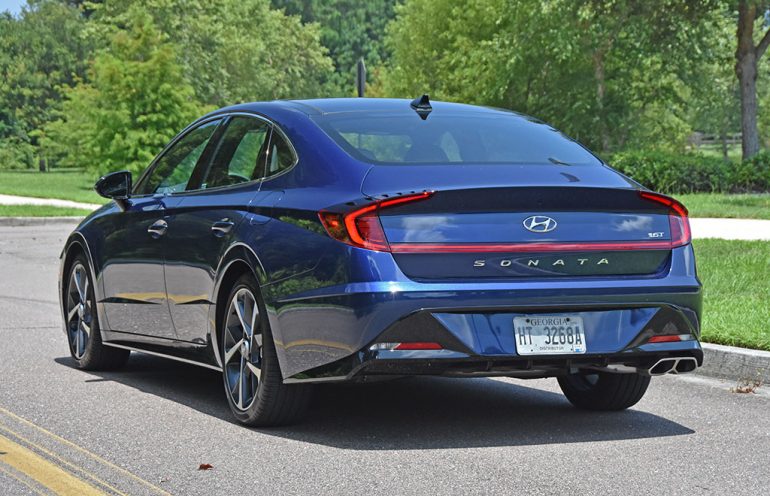 While there isn’t much to brag about in the area of performance, the Sonata SEL Plus with the 1.6-liter turbo engine is rather efficient and easily gets its EPA-estimated 27 mpg in the city and 37 mpg on the highway. I did expect slightly better figures considering the lack of power output, but the Sonata outside of the new N Line isn’t geared towards enthusiasts in the first place. 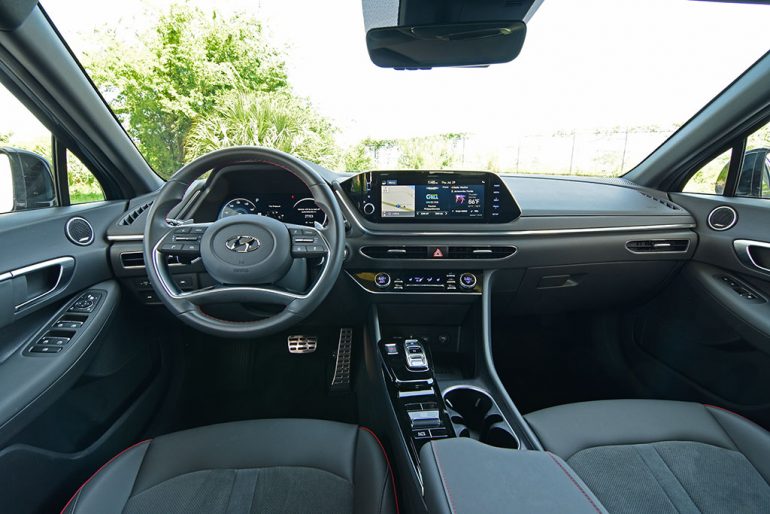 The interior of the Sonata is decently configured with the center of attention being the large 10.25-inch infotainment touchscreen that has a user-friendly interface with a plethora of welcomed feature sets along with the integration of Apple CarPlay and Android Auto. The larger 10-inch screen is part of an optional Tech Package that runs about $2,700 but is well worth the additional cost as it also includes a panoramic sunroof, Bose premium audio system with 12 speakers, LED interior lighting, and a highway drive assist feature to add to the adaptive cruise control. 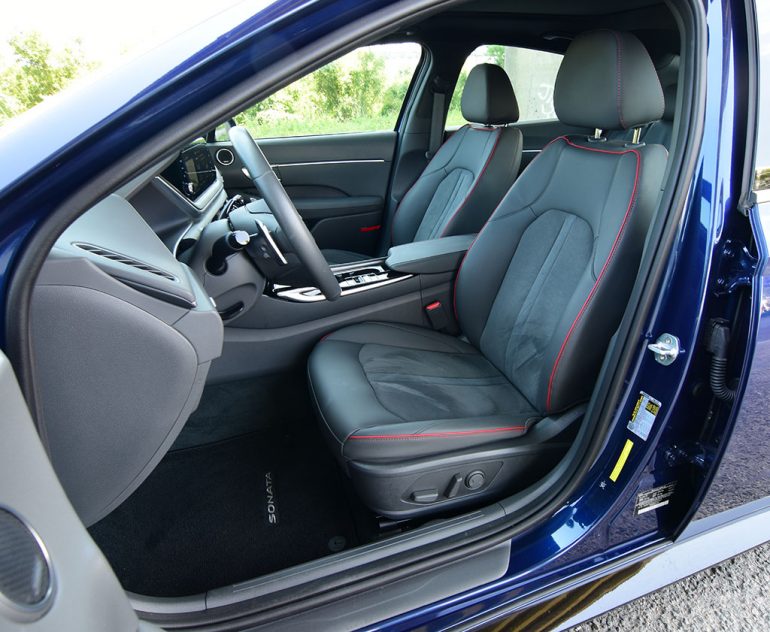 The seating areas are decent and there’s a good use of available space, but the roofline is a bit low for taller people. The one other downfall here is the interior doesn’t look premium but offers plenty of soft touch surfaces above the beltline. The 12.3-inch gauge cluster is a nice touch and can be equipped with additional functions in the higher Limited trim level to offer the blind spot view monitor for a live camera feed of your blind spot when you signal. 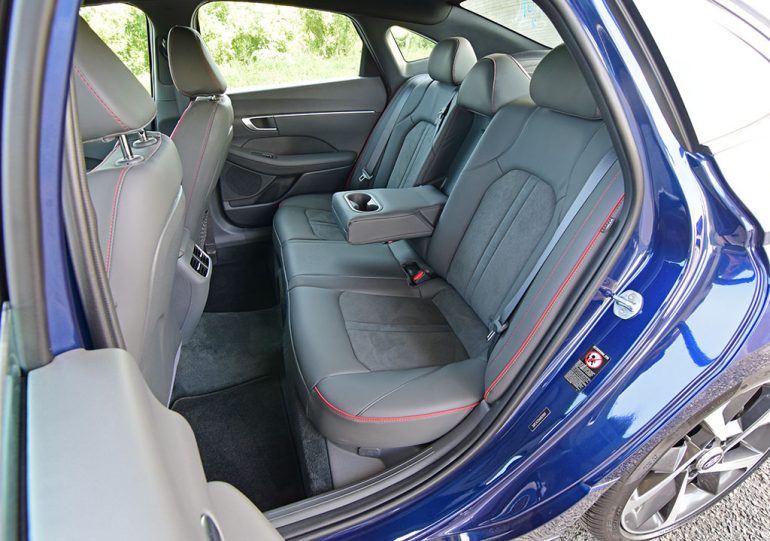 The 2021 Hyundai Sonata SEL Plus looks rather sporty with its 19-inch wheels and darkened front grille. The sweeping lines of the body also add a sporty appeal throughout the structure all the way to the LED taillights being part of a small integrated spoiler. 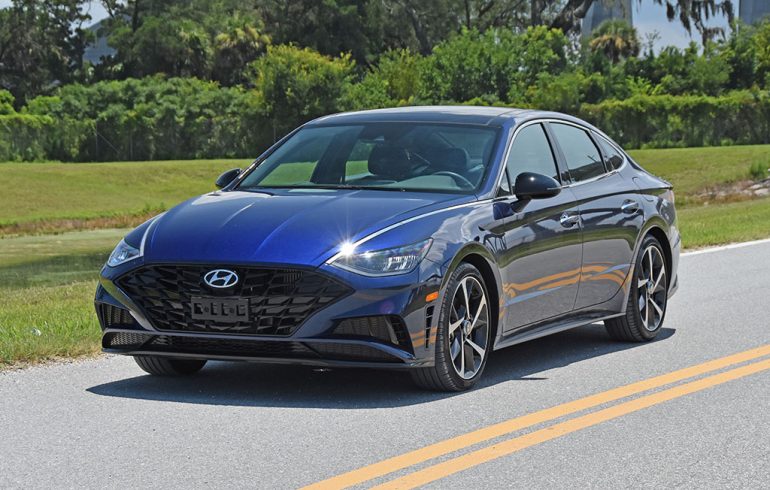 Hyundai has done well to keep the mainstream midsized sedan segment alive while it attempts to be a viable contender against the stiff competition of crossover utility vehicles. Where the new Sonata retains its enjoyment is in the price, starting at just $23,950 for the base SE trim with the naturally aspirated 191 horsepower and 181 lb-ft of torque 4-cylinder engine that isn’t as lively as the turbocharged engine in my Sonata SEL Plus test vehicle, which costs $32,174 including the optional Tech Package, carpeted floor mats, and a freight and handling charge of $1,005. Having a decent list of standard features, respectable ride quality, and a consistent level of efficiency, the Sonata is a good value and will continue to appease a wide range of buyers.