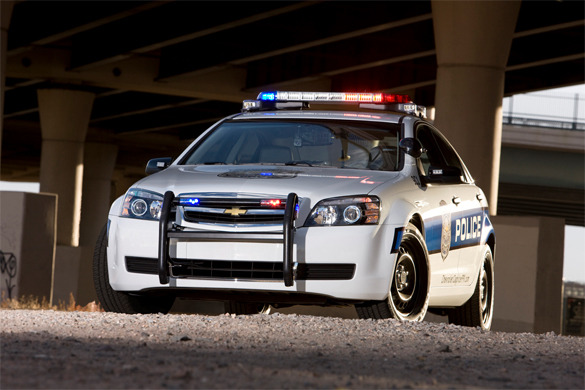 Do you ever pull up next to an older white Chevy Caprice on the highway and wonder if it is safe to pass him because you do not know if it is an unmarked police car or an older patrol vehicle sold at auction to a normal civilian? Pretty soon we won’t have to worry about trying to figure this out because there will be a new sheriff in town driving around in his 2011 Chevrolet Caprice Police car. That’s right; the Chevy Caprice is back, but this time only as a police car.

GM has unveiled a new 355hp Chevy Caprice police car based off of the, you guessed it, Pontiac G8 Zeta platform used to also underpin the new Chevy Camaro.

Surely you didn’t think GM would totally scrap a “good thing” and that thing being the Pontiac G8. Below is the full Press Release of the new 2011 Chevrolet Caprice Police Car.

Be On The Lookout: All-New Chevy Caprice Police Car Reports For Duty In 2011

DENVER – An all-new Chevrolet Caprice Police Patrol Vehicle (PPV) will join the ranks of law enforcement departments across North America in 2011. It’s a modern, full-size, rear-drive sedan that will offer both V-8 and V-6 engines, as well as a host of specialized equipment and features.

Chevrolet made the announcement at the annual International Association of Chiefs of Police convention, in Denver, Colorado. The Caprice PPV will be available for ordering next year and will hit the streets in early 2011.

“The new Chevrolet Caprice police car is the right tool at the right time for law enforcement,” said Jim Campbell, general manager for GM Fleet and Commercial Operations. “We asked for a lot of feedback from our police customers, which helped us develop a vehicle that is superior to the Crown Victoria in key areas.”

Vice President, Global Chevrolet Brand Brent Dewar added, “Along with Impala and Tahoe, the Caprice PPV gives agencies a greater range of choices for police and special service vehicles that are all available from Chevrolet.”

Unlike other police cars on the market, the Caprice PPV is not based on existing “civilian” passenger-car model sold in North America. It has been developed in key areas specifically for police duty, containing modern equipment and features:

* Powerful 6.0L V-8 with fuel-saving Active Fuel Management technology and E85 capability delivers expected best-in-class 0-60 acceleration (sub six seconds) and top speed; a V-6 engine will also be offered, beginning in the 2012 model year
* Optional front-seat-only side curtain air bags allows a full-width rear-seat barrier for greater officer safety
* Two trunk-mounted batteries, with one of them dedicated to powering various police equipment
* Designed for five-passenger seating, meaning the upper-center section of the dashboard can be used for equipment mounting without the concern of air bag deployment interference
* Compatibility with in-dash touch-screen computer technology
* Special front seats designed for the long-term comfort of officers whose car is their effective office, including space that accommodates the bulk of a typical equipment belt

The front seats are sculpted to “pocket” the equipment belt, which greatly increases the comfort for a great range of police officer sizes. The foam density of the seatback and cushion insert surfaces are designed to conform to the shape of an equipment belt’s various items, too, allowing the officer’s back to rest properly on the seatback surface.

“The Chevrolet Caprice PPV’s seats represent a revolution in comfort and utility for officers who spend long hours in their car,” said Bob Demick, lead seat design manager. “The shape also enhances entry and egress, making it easier for officers to exit the vehicle quickly. The seatback bolsters, for example, have been purposefully contoured to help pocket the equipment on the belt, which includes the gun, Taser and handcuffs, which rest comfortably in the sculpted lower bolsters. That also increases the longevity of the trim cover surface.”

Along with comfort, the materials used in the seats were also carefully selected. High-wear materials were chosen to stand up to long hours of everyday use, while breathability, long-term durability and ease of cleaning were also important criteria.

Engineers worked on several iterations of the seat, testing a couple of versions in the field to get real-world feedback from police officers, who used prototype seats in their cruisers for a month. Their input helped determine the final design.

The Caprice PPV is based on GM’s global rear-drive family of vehicles that also underpins the Chevy Camaro. It uses the longest wheelbase of the architecture – 118.5 inches (3,010 mm) – along with a four-wheel independent suspension that delivers responsive high-performance driving characteristics that are crucial in some police scenarios.

The Caprice’s 6.0-liter V-8 is rated at an estimated 355 horsepower (265 kW) with an estimated 384 lb-ft of torque. It is backed by a six-speed automatic transmission that is performance-calibrated for police duty. Additional, police car-specific powertrain and vehicle system features include:

A host of complementary features are also offered, including special equipment packages such as spotlights; lockouts for the power windows and locks; and an “undercover” street-appearance package (9C3).

To enable more room for interior equipment, the standard radio can be relocated to the trunk, allowing for an in-dash, touch-screen computer to be used.

Caprice on patrol: A brief history

Chevrolet’s history with law enforcement is almost as old as the brand itself. Police departments have used Chevy sedans as police cars for decades, ordering them with basic equipment and powerful V-8 engines – including some special engines that weren’t available in regular-production models, such as the 1959 Biscayne that was offered with up to 315 horsepower.

The full-size Chevrolets joined the force in 1976. All Caprice police cars – including the new, 2011 model – have carried the 9C1 order code. Here’s a quick look back at Chevys on patrol:

1976 – The 9C1 order code is given for the first time to a full-size Chevy police car package. It carries the Impala name.

1977 – The full-size Chevy is downsized. The 9C1 police package is retained, as is the Impala name.

1991 – A new-generation Caprice is launched, with the 9C1 police car still on the beat.