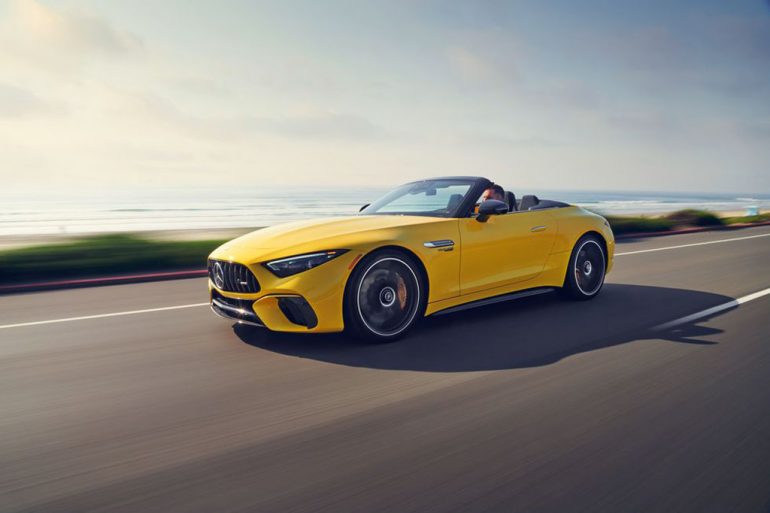 The Mercedes-Benz SL has long been a vehicle that attracted individuals who sought a certain level of exclusivity year after year. Even Steve Jobs while at Apple repeatedly leased the same spec Mercedes SL every six months mostly to avoid placing a tag on the vehicle and could drive around anonymously. The evolution of the SL has carried a traditional class for Mercedes ever since the Mercedes 300SL gullwing and convertible from the 1950s. Today, the SL returns after a short hiatus when production ended in 2020 as a cleverly positioned alternative to the Mercedes-AMG GT Coupe and Roadster, which just stopped production in December 2021.

The proportions of the Mercedes-AMG SL, which only comes in two AMG flavors, the SL55 and SL63, bring back the expected elongated hood and curvy aluminum body panels accented by subtle chrome, carbon fiber, and glossy black bits. The wheelbase is now longer to make way for rear seats that are more of an extra storage area than usable seats for adults because of their small size. The 2+2 seating configuration harkens back to the R 129 SL Roadster marking a time of the most successful versions. Gone is the power-retractable hard top in place of a classy soft top that takes just 15 seconds to open or close at speeds up to 37 mph. The soft top is claimed to save 46 pounds and helps to lower the center of gravity. 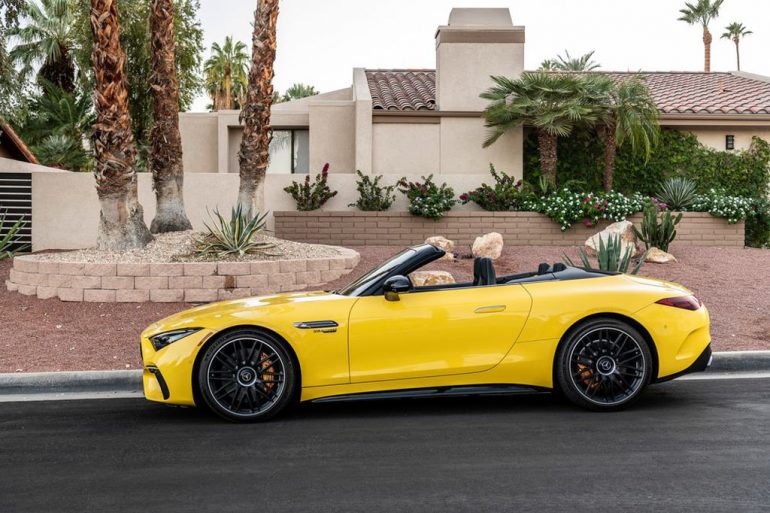 In the tradition of Mercedes, the new SL exhibits a stately classiness inside the cabin where it pulls off a new stunt to be more minimalistic potentially to exhibit an interior that ages well without touchscreen real-estate being so dominating. There’s a new 11.9-inch touchscreen that is mounted at a slanted angle and can be adjusted 12 to 32 degrees. The 12.3-inch digital gauge cluster combines the latest vehicle information and customizable screen for a variety of displays controlled through the latest steering wheel with touch-capacitive button areas that have haptic-press feedback. 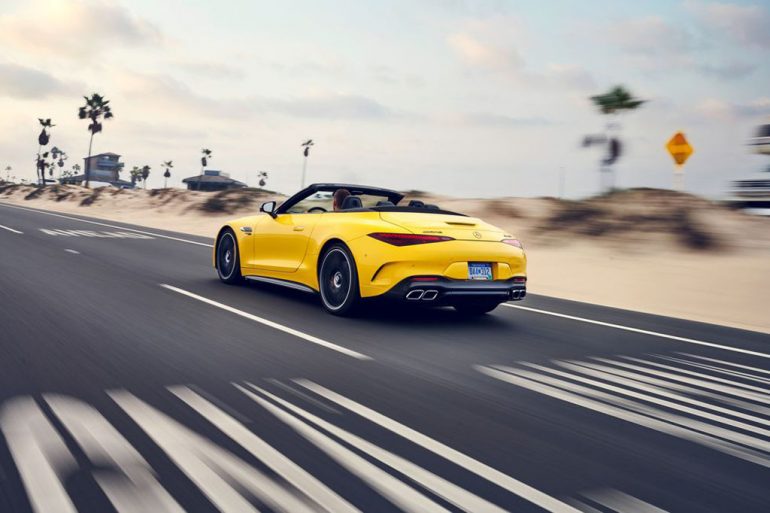 Powering the new 2022 Mercedes-AMG SL is the familiar 4.0-liter BiTurbo V8 engine but in the SL55 it produces 469 horsepower and 516 lb-ft of torque and in the SL63 you get 577 horsepower and 590 lb-ft of torque all sent through a 9-speed automatic transmission with a multi-plate clutch pack in place of the traditional torque converter. Both new SLs are all-wheel-drive and feature torque vectoring, rear-wheel steering, and the latest AMG Active Ride Control suspension system that features active hydraulics to control and compensate for body roll. Zero to 60 mph takes place in 3.4 seconds for the SL55 and 3.1 seconds in the SL63. 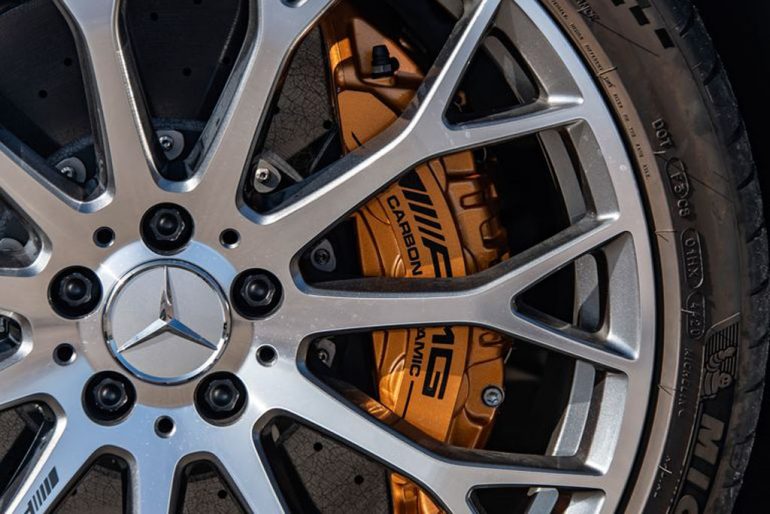 There’s a mirid of driving modes from the AMG DYNAMIC SELECT to customize the feel and aggressiveness of the SL. There is even a RACE mode that comes standard on the SL63 but as an option as part of the AMG DYNAMIC PLUS package. As expected, there is also a mirid of expected active safety features. 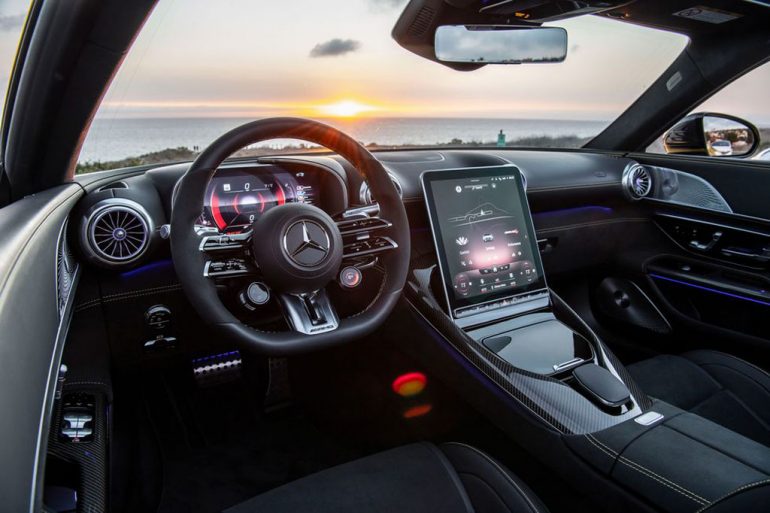 There are other add-ons to bring the new SL up to today’s expected standards for a world-class exotic roadster, such as a front axle lift system to raise the front end by 1.2-inches to clear steep obstacles, the latest iteration of the MBUX infotainment system with natural language understanding, AIRSCARF neck-level heating, optional AMG high-performance carbon-ceramic brakes, and increased rigidity by 18% from the combination of carbon fiber, aluminum, magnesium, and steel used in the underpinnings. 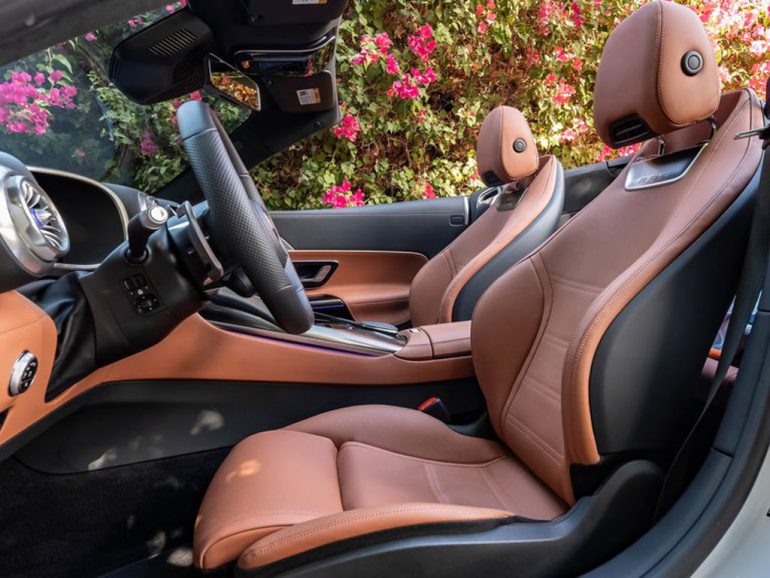 No stones are left unturned in the new Mercedes-AMG SL55 and SL63. There’s the expected opulence of a luxury roadster with the performance to run with the best of them. Of course, all that you get in the new SL55 or SL63 comes at an increased price over the outgoing model with the base pricing of the SL55 landing at $135,000 and $175,000 for the SL63. Of course, that pricing quickly rises as the options and option packages accumulate but ultimately birth a unique and alluring vehicle.