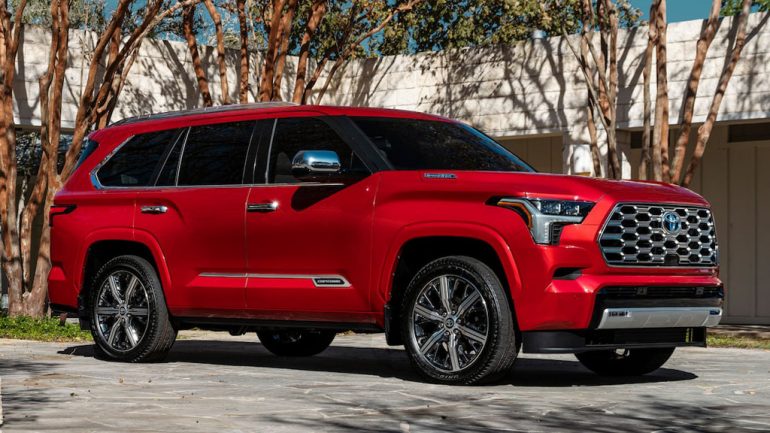 The Toyota Sequoia has been a methodical giant in the scheme of how popular SUVs are in today’s automotive landscape. Such a giant has prided itself on being one of the most reliable vehicles of its type on the road taking up its rightful place to fit its name as being a large presence but standing strong and tall, just like the Toyota brand.

Marking 13 years of the outgoing generation, it was well past time for an update, one that brings the Toyota Sequoia into the new age where technology rules the road. Now, Toyota has introduced the new redesigned 2023 Sequoia, and it looks amazing and promising. 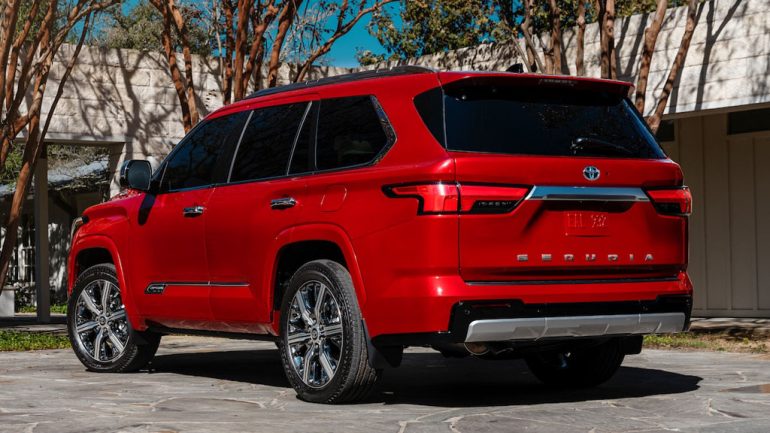 The new 2023 Toyota Sequoia builds off of the new Toyota Tundra and receives the Tundra’s i-Force MAX twin-turbo V6 hybrid setup touting 437 horsepower and 583 lb-ft of torque. As a large body-on-frame SUV, that is more power than in the new Lexus LX600, making the new Sequoia a rather attractive offering in more ways than one. The electric motor is sandwiched between the engine and transmission, which is a 10-speed automatic that can be decoupled when needed by the hybrid system. The motor serves extra duty as the engine starter and generator to recover energy under braking and provide an extra boost when accelerating from a stop. 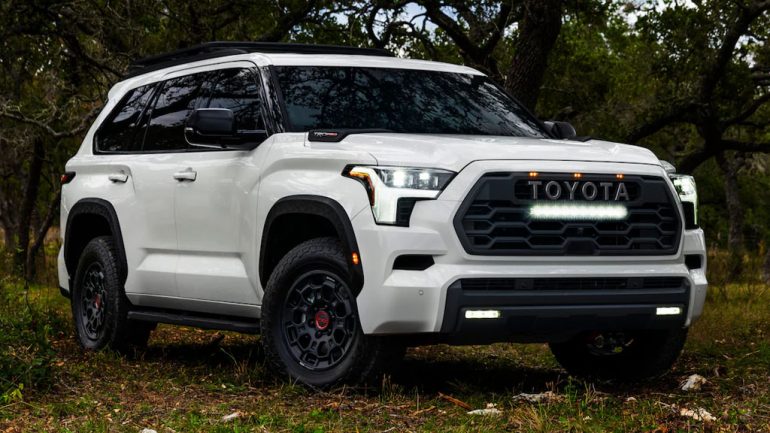 It was time to update the Toyota Sequoia and we think there was justice served here where the Sequoia can now tow up to 9,000 pounds and has the availability of a Tow Tech Package that helps steer trailers in reverse. 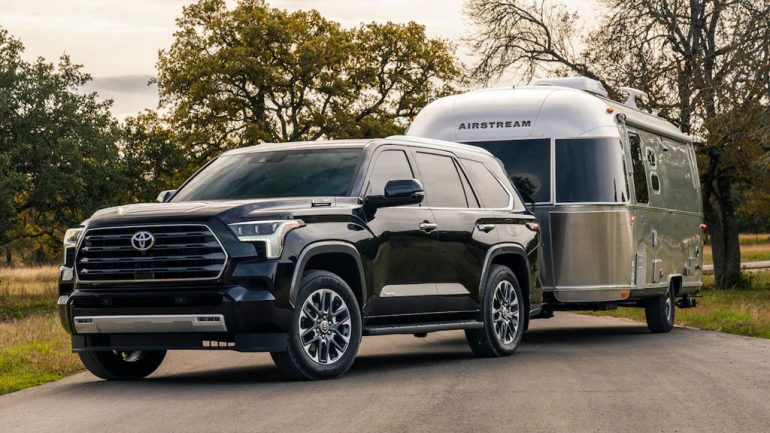 We shouldn’t confuse the new 2023 Sequoia as being the Land Cruiser replacement. However, one could argue that the new Sequoia fits the mold well considering there are several trim options from the base SR5 up to the rugged TRD Pro and luxurious Capstone trim. There are many distinctive features of each trim for the new Sequoia where Toyota offers many TRD variations before you get to the hardcore TRD Pro model along with a Platinum and Limited range toppers before you get to the plush and near-Lexus-like Capstone trim. 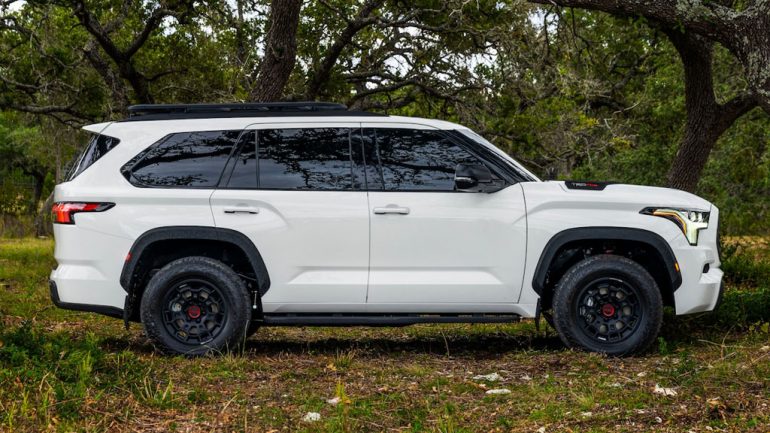 There’s plenty of off-road prowess as the new Sequoia can be had with all the expected goodies in its TRD Pro trim featuring the highlights of Fox internal bypass shocks, Crawl Control mode, several other multi-terrain drive modes, a TRD-logoed forward skid plate, and an onslaught of TRD Pro badging throughout the interior and exterior. Of course, four-wheel drive comes standard in the TRD Pro and TRD Off-Road package Sequoias while the base trims have two-wheel-drive as standard, which may yield slightly better fuel consumption. The new Sequoia as a live axle/solid axle suspension setup in the rear with the availability of a rear load-leveling air suspension system and adaptive dampers. 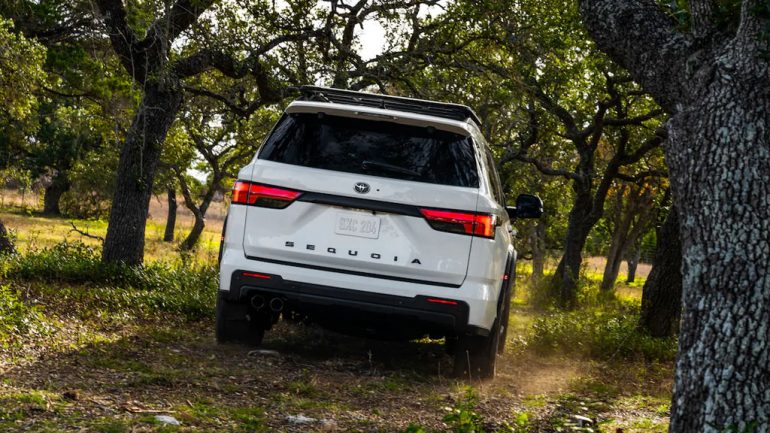 Speaking of fuel consumption, we expect the new 2023 Sequoia to be much better than the gas-guzzling outgoing model where we could see just over 20 mpg, which is quite a departure from the dismal mpg we used to see in the 5.7-liter V8 Sequoia. There’s something magical about having a twin-turbo V6 hybrid powertrain from Toyota who pioneered hybridization of mainstream vehicles! 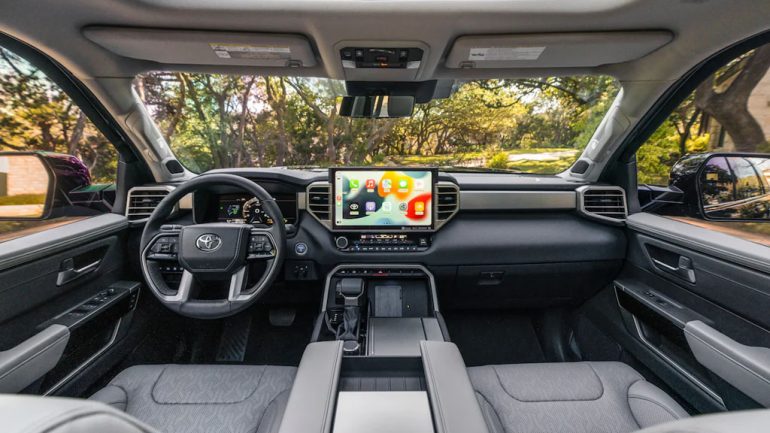 While the exterior of the new Sequoia borrows a bit from the new Tundra, there are many distinguishing features that make it unique and stand out in the crowd. In a way, the look looks more like a cross between the new Tundra and Toyota RAV4, only in larger proportions over the compact crossover. There are a variety of wheel options and the proper body cladding or painted fenders to fit each unique trim level. 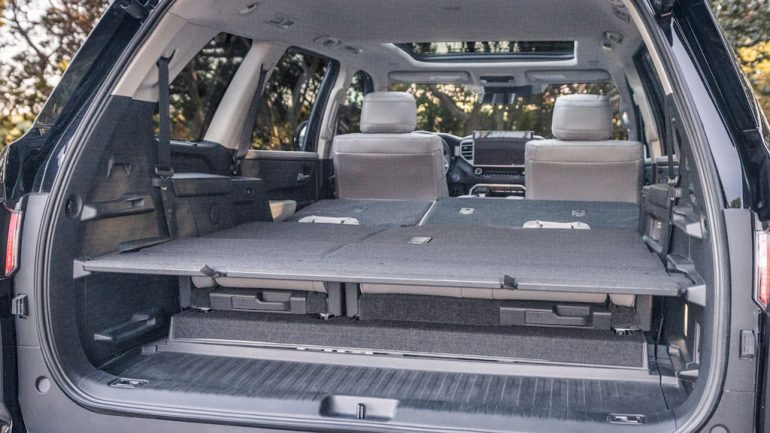 Inside, the new 2023 Toyota Sequoia closely follows the new Tundra with its overall layout. There’s the dominating 14-inch infotainment touchscreen in the center that’s nicely integrated into the dashboard running a new system, which features Apple CarPlay and Android Auto smartphone integration, Wi-Fi connectivity for up to 20 devices, and a new voice-activated assistant that can handle several vehicle functions controlled via voice. There’s an available 12.3-inch digital gauge cluster, also like what you find in the new Tundra. A bevy of active safety features will be standard, which include items like collision detection, lane/keep departure alert/mitigation, blind-spot monitor, rear cross-traffic alert, automatic braking, and adaptive cruise control. 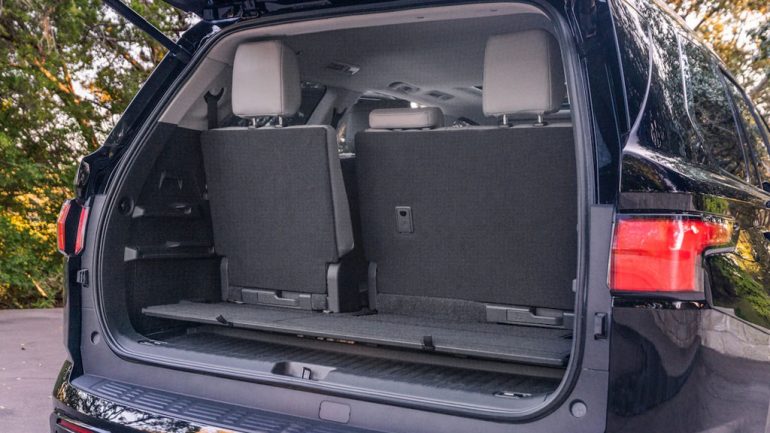 There are five trims available for the new Toyota Sequoia, SR5, Limited, Platinum, TRD Pro, and the Capstone premium trim. All trims come with three rows of seating but offer three configuration options where the second row can be either a bench seat or a pair of captain’s chairs. The second and third rows can be removed for maximum cargo area. 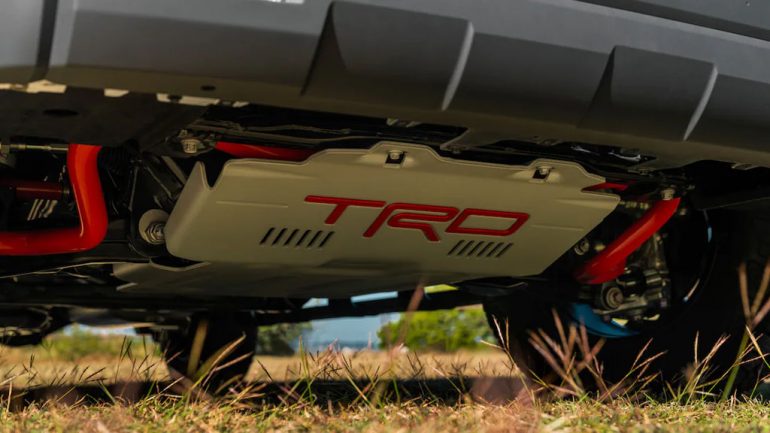 The new 2023 Toyota Sequoia is set to hit dealerships this summer. Currently, there’s no word on the specifications for fuel economy or pricing, but we expect something slightly more than the outgoing model’s starting price of $50,500 and rise to pricing comparable to its direct competition.