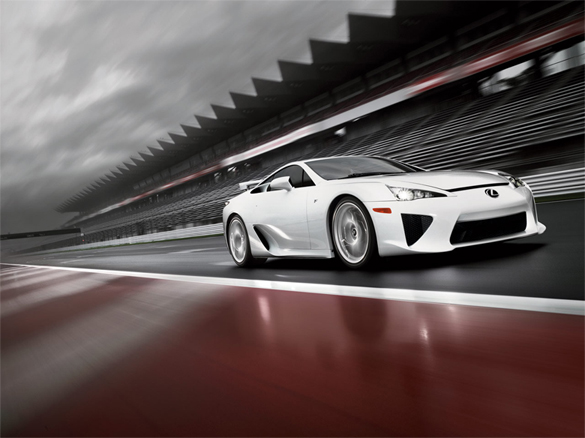 As soon as the Lexus LF-A is put on display at the 2009 Tokyo Motor Show, Toyota releases official details of the upcoming Lexus Supercar. With an expected release date in early 2011 for customers, the new Lexus LF-A has been a creation-in-progress for almost 9 years now.

The confirmed specs of the rear-wheel-drive Lexus LF-A supercar are highlighted with a 4.8-liter V10 that makes 552hp and 354 lb-ft of torque that can rev to a lofty 9000 rpm redline. To lay the power down the rear wheels is a 6-speed sequential gearbox. The LF-A tips the scale at 3,263 pounds which makes this car good for a mad dash to 60mph from a standstill in 3.7 seconds while being able to reach a top speed of 202 mph.

Why the $375,000 price tag for a Japanese supercar? Well, only 500 of these bad boys will be produced.  You better start talking to Toyota/Lexus so you can place your order now. I am sure we can find 500 people that are willing to make a home for the second coming of Godzilla.

Speaking of Godzilla, we wonder how the LF-A will do put up against the heavier Nissan GT-R? With the GT-R having a price-tag that is $300,000 less than the LF-A, it is already a winner in my book even if the LF-A turns the Nurburgring at a faster time. With the current specs of the LF-A I just cannot justify the “price for performance” factor. But then again, maybe Toyota is chasing the Bugatti Veyron. Yea, that’s it, this is a Japanese Veyron on a budget right? Regardless, Toyota seems to be making an attempt to bringing back that “excitement” that we use to love.

Tokyo, October 21, 2009 – Lexus announces today the official launch of the LFA, a two-seat supercar scheduled to go into production at the end of 2010 as the pinnacle of the Lexus “F” premium sports car series. Pre-sales start today.

Ultra-responsive and extremely stable even when taken to the edge, the LFA creates a sense of reassurance that opens up a new world of driving emotion, exhilarating the senses to move the driver in more ways than one.

Only 500 units of the LFA are to be produced and sold worldwide.

A prototype of the LFA is now on display at the 41st Tokyo Motor Show, which is open to the general public from October 24 to November 4 at Makuhari Messe in Makuhari, Chiba Prefecture.

1. Packaging brings out the most in fundamental performance

Balanced
Relatively higher weight components such as the engine and transmission are placed within the wheelbase. A low center of gravity is made possible by the use of dry sump lubrication1, along with placing peripheral components (oil pump, water pump) behind the engine. Furthermore, optimal placement of the transmission and the fuel tank in front of the rear axle adds to this application of centralized mass. This minimizes weight shift during cornering and contributes to outstanding performance and stability. Lighter weight components, like the radiator and electric fans, are placed behind the rear axle.

Combined with a front-engine and rear-wheel-drive configuration, the short, wide and low body allows the LFA to achieve its target front-to-rear weight distribution of 48:52.

Driver-centered
The driver’s seat is positioned near the LFA’s center of gravity. The centralized seating concept (with the seat between the front and rear axles and closer to the left–right center) is made possible by the use of a rear transaxle and vertically stacked torque tube and exhaust pipes reducing the width of the center tunnel. The driver placement is aimed to provide maximum car-to-driver feedback, especially under sport or high G-force driving conditions.

Titanium valves, ultra–light weight rocker arms with a diamond–like coating and a fully integrated lower crankcase that reduces pumping losses at high RPMs combine to provide the driver with overwhelming acceleration right up to the 9,000rpm redline. The LFA’s purpose-built V10 delivers 90% of its peak torque between 3,700rpm and 9,000rpm.

The very light and rigid CFRP cabin, combined with a front double-wishbone suspension and a rear multilink suspension, result in a very stable, controlled ride. Detailed aerodynamic engineering results in elements such as a flat underbody, a diffuser and a speed-controlled rear wing, which allows precise vehicle response at all vehicle speeds, thus creating unity between driver and machine.

The exterior design includes carefully tuned aerodynamics and airflow management. The use of CFRP, in addition to strength and weight advantages, frees up the design of the exterior panels allowing a fresh supercar L-finesse design. The interior design combines state-of-the-art instrument-panel design and technology, along with a variety of custom-tailored interior trim packages to suit the most discerning driver.