I’m not sure if this is typical of car guys but once or twice a week I come across cars from yesteryear that catch my eye and I would like to own. Can I necessarily afford them? Well, no, but it is fun to dream. I’ll spend time researching the car and, of course, examining whatever historic footage I can find on YouTube and looking at pictures. 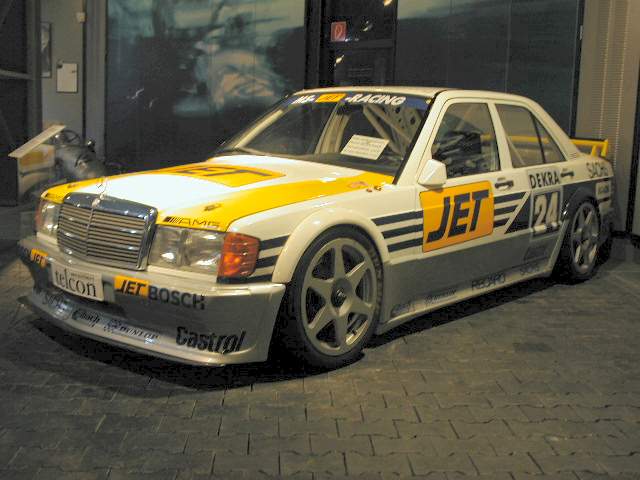 The 190E model range was launched by Mercedes in 1983 as there attempt to fight the Bavarians on new ground established by the original late 1970’s 3 Series – bringing both companies into the small luxury sedan market. Mercedes decided to take it a step further and approve a racing program to take the 190E into rallying and called upon famed British engine builder Cosworth – the very same company that built the hugely popular Ford V8 DFV engine for Formula One that was in service from the late 1960’s up through the mid-1980’s. Cosworth took their shot at the existing Mercedes 2.3L 4-cylinder 8 valve engine which was then only producing about 125HP. Cosworth tuned up the engine with revised cylinder heads, and an additional 2 valves more per cylinder all of which pushed peak output to a then-heady 185HP. Hence the name 190E 2.3-16 for a 190E model with a 2.3L engine displacement engine and 16 valves per cylinder. The car also came with a subdued body kit to help reduce drag and increase downforce but little aesthetically separated the 190E “Cossie” from its lesser siblings. Mercedes also supplied an impressive multilink suspension for the 190E – technology that moved on to go into other Benzes of the future. 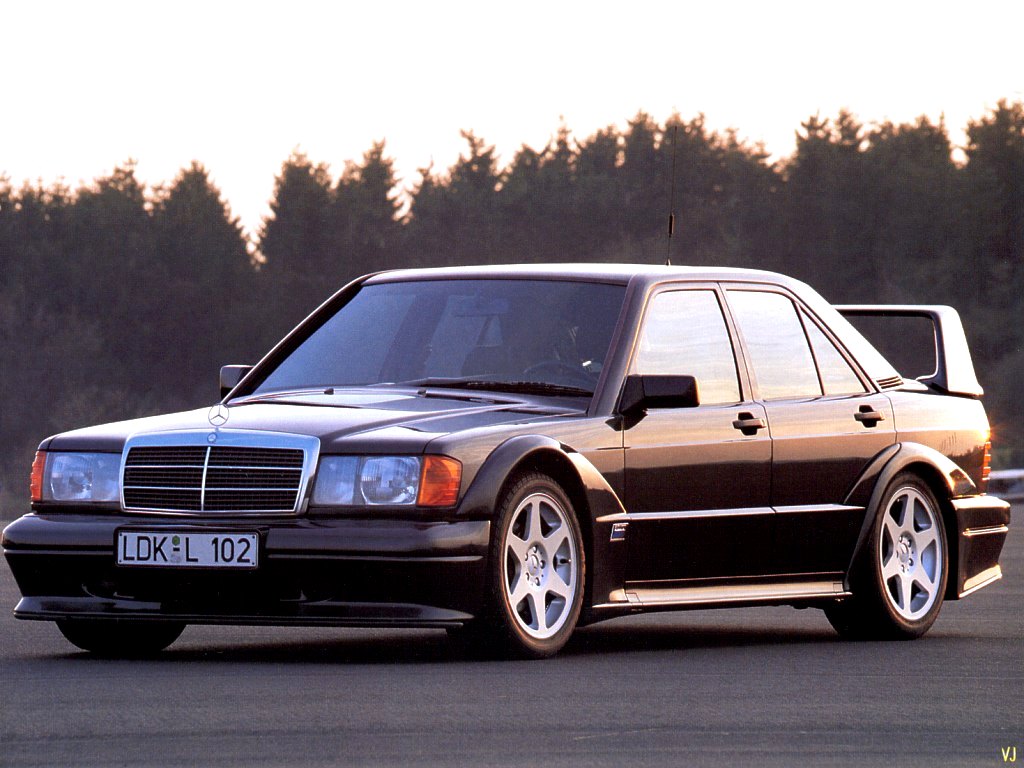 However, while Cosworth had presented Mercedes a masterpiece, Audi was delivering an unexpected blow with the their turbocharged engines and all-wheel-drive in the then-new Quattro Coupe in the world of rallying. As a result, Benz found the 190E “Cossie” to already be uncompetitive in the Group B rallying that was dominated by forced induction, all-wheel-drive cars. So, they took aim at their own backyard and entered the 2.3-16 into the DTM( Deutsche Tourenwagen Meisterschaft). Another way in which Benz showed off the revised 190E was to  demonstrate both its sportiness and reliability.

Mercedes first decided to prove the reliability of the 190E with a test at the 12+ km Nardo circuit in Italy. The test was comprised of 3 190E’s traversing the circuit continuously until the 50,000 km mark was broken. Over a period of 8 days the 190E’s ran without fault only stopping for tires and fuel and small maintenance to break the barrier demonstrating the incredible reliability of the cars and averaging an unbelievable 154 mph. The second demonstration took place in 1984 at the famed Nurburgring where Mercedes assembled current and past Formula One greats for a head-to-head race in the 2.3-16 Cosworths. With names like Prost, Lauda and Hill it was quite the race but a very young, future champion named Senna ultimately pulled out a victory. Mercedes had officially arrived back in motorsport and with a car that could get the job done at that. With 5,000 units to produce for homologation in DTM, Benz stepped it up and rolled out the souped up 190E’s.

The late 1980’s saw the 2.3-16 swapping paint with the E30 M3 and Ford Sierra Cosworths of the day on many European tracks. As a response to increasing competition, the engineers at Cosworth reportedly found the need to upgrade the potent 190E 2.3-16 from 2.3 to a displacement of 2.5 liters and increased the horsepower of the street version (without catalytic converters) to about 202HP. The M3 continued to move the goal posts in the early 1990’s by releasing Evolution models and Benz followed suit with its own two Evolution models of the 2.5-16 that carried much revised engine and body work. The engine had revised cams and was given a shorter stroke while the body work was beefed up for further aerodynamic benefits. The engine also was revised by AMG and provided an additional 30HP for the street versions. About 500 models of each were made of the Evolution I and Evolution II to keep in line with the homologation specifications for the DTM. 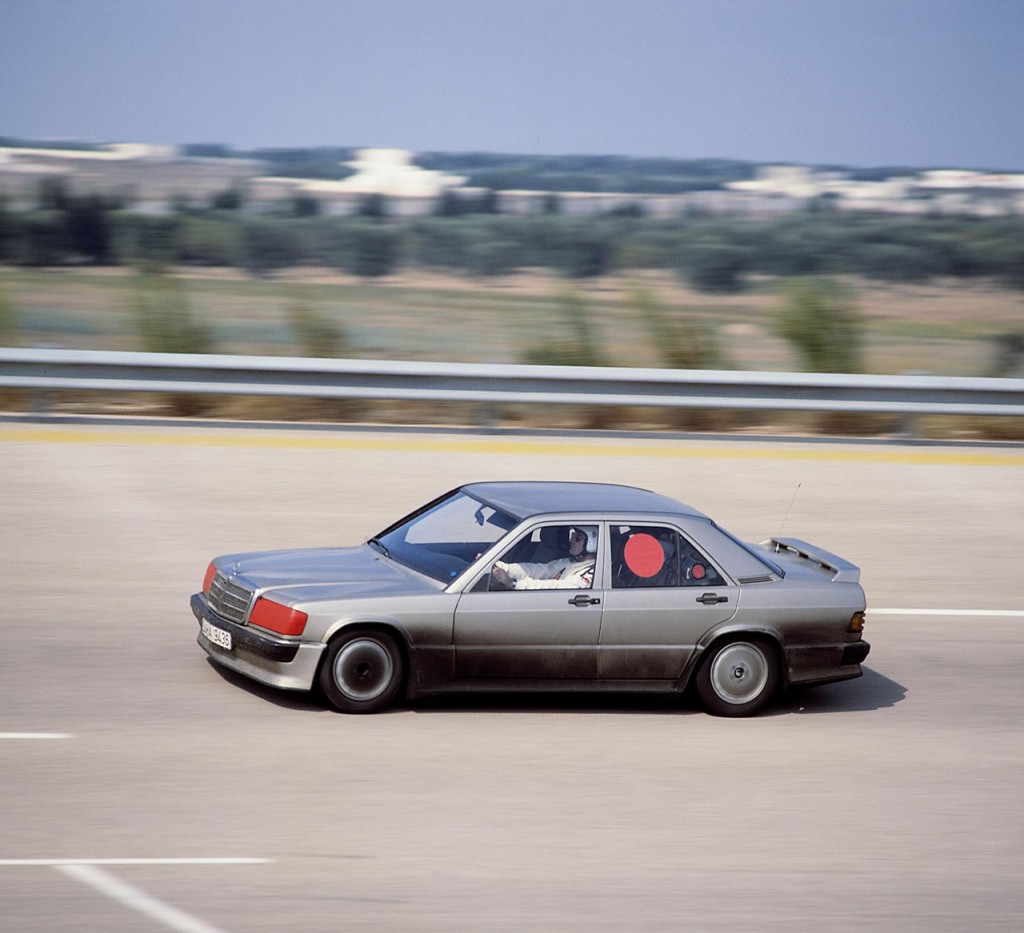 While the 190E 2.3-16 and 2.5 variants weren’t the most dominating of cars in DTM like its rival the E30 M3, the little Benz managed to further Mercedes’ reputation for building both sporting and reliable cars. The Cosworth-tuned 190E has won over the hearts of many car enthusiasts over the years for its revvy engine, excellent suspension and tight little package with the dog-leg, racing-style 5-speed manual transmission and hasn’t been forgotten entirely for the impression it left on motorsport two decades ago. Even better for car fans, you can easily find good condition 190E 2.3-16 for under $10,000 compared to the E30 M3’s going for the high $20,000 to $30,000 mark.