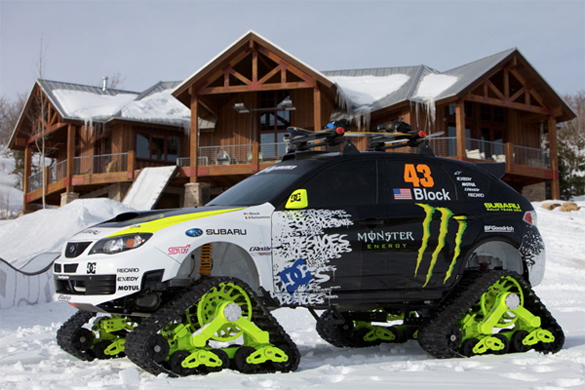 Could you only imagine taking virtually the same Subaru WRX STi that Ken Block drives in those absolutely stunning Gymkhana videos onto the snow as a fully built TRAX vehicle? Well, that is exactly what has come of a new rally-prepped 2009 WRX STi TRAX vehicle built by Vermont SportsCar.

Below is the full press release spilling all the details on this 400hp snow beast that is making its debut at the 2009 SEMA show in Las Vegas, NV. 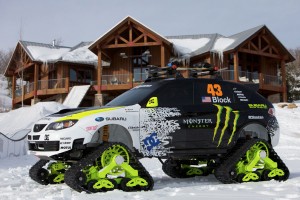 Just in Time for the Holidays, a 400-Horse (-powered) Sleigh

CHERRY HILL, N.J., Nov. 2 — The Subaru WRX STI, when equipped with proper tires, is capable of impressive all-weather performance. But when even snow tires are not enough, Subaru offers a solution – a 400-hp WRX STI equipped with a snow tracks system, as showcased at the 2009 Specialty Equipment Manufacturers Association (SEMA) Show at the Las Vegas Convention Center, Nov. 3-6.

Starting with a rally-prepared 2009 WRX STI, Subaru Rally Team USA’s technical partner, Vermont SportsCar, built the one-off 400-hp TRAX STI envisioned by, and built for, DC Shoes co-founder and SRT USA driver Ken Block. The WRX STI TRAX is ready for the half-pipe, with a Yakima FatCat 4 Snowboard Rack up top, a Yakima Landing Pad rack base and DC Shoes XFB-C Snowboards. Naturally, there is a custom matching sleigh to go with it.

With the exception of the Mattracks rubber track system, the car is rally-prepared and similar in specification Block’s #43 SRT USA competition STI. Starting with a stock 2009 Subaru Impreza WRX STI, Vermont SportsCar stripped the car’s interior bare, lightened the shell and then fully seam-welded it for added strength, also installing a multipoint roll cage manufactured from T45 steel. Major differences from the stock STI include the addition of lightweight carbon/Kevlar RECARO SPA ProRacer competition seats with the Head and Neck Restraint System (HANS), carbon fiber door panels and an onboard fire suppression system.

And Now for Something Completely Different

Protected beneath the padded roll bars are four heated and embroidered leather RECARO Speed seats with Sabelt 4-point harnesses. For music on the slopes, a marine grade water resistant Alpine digital media receiver is coupled with marine grade Kicker speakers and a 10-inch subwoofer. The rear of the sleigh features a large cooler and a grab-bar for towing snowboarders. Cup holders and LED lighting finish off the interior.

The sleigh also features a carbon fiber dashboard, center tunnel cover and rear-cooler cover. Tucked into a glovebox within the carbon fiber covered dashboard are two Viosport POV.1 camera systems. One camera lens is flush-mounted within the dashboard to film passengers, and the other is mounted high on the roll bar to record action around the sleigh.