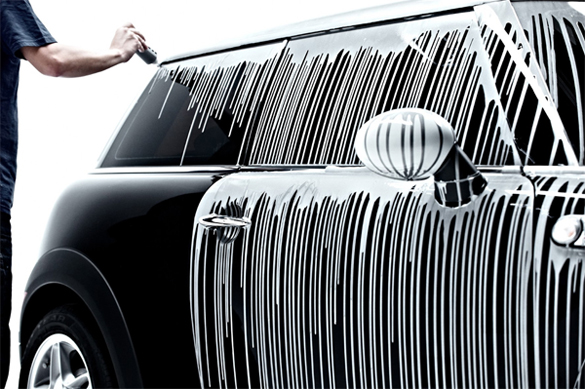 MINI has some of the coolest “little” cars around which as me puzzled as to why someone would “KRINK” all over it. Well silly me, it is all part of a urban phenomenon that showcases street art on an “urban” vehicle, the MINI Cooper. Below is a newly released video from MINI and press release on the new KRINK MINI. Enjoy!

KRINK MINI – Street art and MINI have a lot in common. Both are an urban phenomenon, both are part of metropolitan streets.

MINI Germany has invited the New Yorker street artist Craig KR Costello to come to Hamburg and design a MINI.

KRINK is the name of his brand, that stands for highest Quality markers and ink (KR-INK) and has a great reputation among street artists as well as designers worldwide.

The typical style of KRINK, the so-called KRINK dripping ink aesthetics can now be seen on a black MINI Cooper S.

28.10.2009 Munich — What MINI and street art have in common? The MINI has always characterized the image of the metropolis and is itself part of the urban street culture. Exceptional design has always been to claim the mark. A passion shared by the protagonists of the creative street art.

The legendary New York street artist Craig “KR” Costello has missed last week in Hamburg, a MINI its unique style. His trademark, so-called KRINK dripping ink aesthetics, are motifs for which the color extends downward, as if it were applied too thick. The entire MINI was designed in the typical drop KRINK aesthetics of the creative people from Brooklyn. In the silver color runs along the distinctive shape of the MINI, around the body and side and rear windows of the black car.

The project was the “first love story” and the photographer Ali Salehi.

Am 28.10. presented the Hamburg trendy KRINK MINI in the bar “First Love” to the public. Am 31.10. interested will have the possibility of the MINI, and other works by the artist from the Vicious Gallery (HH) to admire.

For more information about the project and an interview with street artist can be found at www.MINIspace.com.

About KRINK.
Craig “KR” Costello earned in the 90 years of downward trending silver signature great fame in the scene.

This resulted in the brand KRINK. Today’s tags can be found in doorways, on walls, subway stations, street signs, etc. in the cities weltweit.Bereits in his youth, he lived in Queens, New York, developed KR graffiti colors. What began as a personal experimenting with homemade materials, quickly became a first strictly limited product line with special silver paint in bottles, which he distributed to selected friends. The result is a thriving company has grown, offering under the name KRINK (KR-INK), a wide range of specialty inks and markers that represent the highest quality and have a genuine cult status.