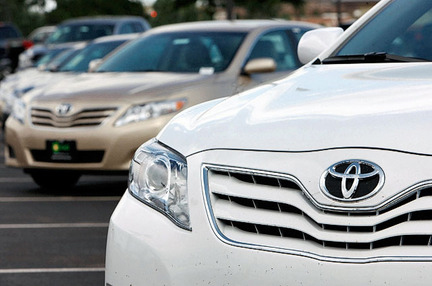 ABC News Investigation uncovers the reports of Toyota’s “runaway cars” that may have resulted in 16 deaths and over 200 Accidents. Toyota owners are demanding answers. Watch the controversy unfold November 3rd on World News with Charles Gibson’ and ‘Nightline’

Refusing to accept the explanation of Toyota and the federal government, hundreds of Toyota owners are in rebellion after a series of accidents caused by what they call “runaway cars.”

Safety analysts found an estimated 2000 cases in which owners of Toyota cars including Camry, Prius and Lexus, reported that their cars surged without warning up to speeds of 100 miles per hour.

Toyota says the incidents are caused by floor mats becoming stuck under gas pedals, but owners say that’s not what happened to them.

Watch the full report tonight on ‘World News with Charles Gibson’ and ‘Nightline’.

“I’m absolutely certain that in my situation, it was not the floor mats,” Elizabeth James told ABC News. She was driving her Toyota Prius outside Denver, CO when she says it suddenly shot up to 90 miles an hour, even though her foot was on the brake and not the gas pedal.

“I kept going faster and faster,” James said. “And all of a sudden& my foot was pressing on the brake super, super hard and I wasn’t slowing down.”

James and some other Toyota owners suspect the accidents have been caused by some kind of glitch in the electronic computer system used in Toyotas that controls the throttle.

Toyota officials refused to talk with ABC News about the incidents, but posted a statement from executive Bob Daly on its website last night that said: “Some news reports suggest there may be other causes of unintended acceleration, speculating about electronic engine control systems, braking performance or electro-magnetic interference among other theories. There is no evidence to support these theories.”

The National Highway Traffic Safety Administration has done six separate investigations of such acceleration surges in Toyotas since 2003 and found no defect in Toyota’s electronics.

Some Toyota Owners Point to Problem Other than Floor Mats

Many Toyota owners remain convinced that an electronic problem is to blame.

Bulent Ezal was driving with his wife of 46 years in their Toyota Camry in central California, when he says it suddenly took off. The car plunged over a 100 foot cliff into the Pacific ocean, and while he survived, his wife did not.

“All of a sudden the car surged with force and I was thrown back to the seat,” Ezal said. The last thing he heard was his wife screaming before he blacked out. Toyota says the accident was caused by Ezal mistakenly pushing the gas pedal, but Ezal is adamant that his foot was “absolutely, positively on the brake.”

There have been other deaths as well, including a fatal accident near San Diego this August that took the lives of California Highway patrol officer Mark Saylor, his wife, daughter and brother-in-law.

The Lexus they were driving, borrowed from a dealer, raced out of control at 100 miles an hour before hitting another vehicle, crashing into an embankment and bursting into flames.

Right before the crash, Saylor’s brother-in-law called 911 from the backseat of the vehicle and said urgently, “Our accelerator is stuck. We’re in trouble&There’s no brakes.”

Toyota said the problem was the wrong-sized, all-weather rubber floor mat in the car which was caught and held down the gas pedal. The company ordered a huge floor mat recall for 3.8 million cars.

In Tokyo, the president of Toyota, Akio Toyoda, formally apologized, saying, “Four precious lives have been lost. I offer my deepest condolences.”

But many Toyota owners remained unconvinced, including Elizabeth James in Denver, CO and her husband Ted. They organized a YouTube campaign accusing Toyota of gross negligence and cover-up and are demanding answers.

To see more of ABC News’ investigation, tune in to ‘Nightline’ tonight.