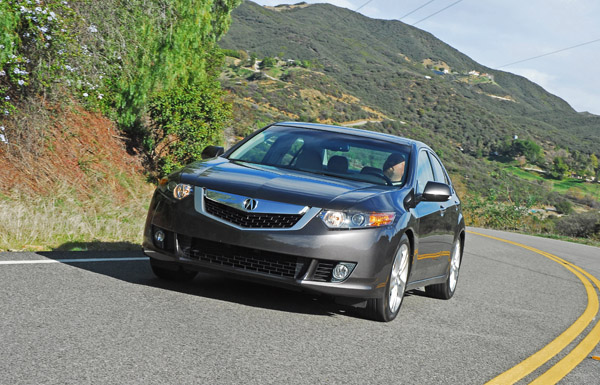 For 2010, Acura expands the performance and appeal of the TSX sports sedan by adding a V6 powered TSX to its lineup.  Targeted at a performance oriented near-luxury buyer, the 2010 TSX brings more power by offering a new 3.5 liter V6 model to its popular sport sedan line-up.

The new 2010 TSX V6 can go toe-to-toe with the top sports sedans in it class.  Matched with 18in. wheels and a revised suspension, the TSX V6 is proof positive that a smart vehicle choice doesn’t have to be a boring vehicle choice.

Designed as a desirable choice for entry-level luxury sport sedan buyers, the second generation TSX is larger, more agile; more performance oriented and even ‘more Acura’ than ever before.  The latest has evolved to offer more comfort, convenience and safety.  It does so with expanded luxury and electronic features, a wider stance for more agile handling and advanced safety systems.

The new TSX engineers developed an entirely new V6 powered engine for the 2010 model.  Delivering a potent 280hp at 6,200rpm and 254lb.ft. of torque at 5,000rpm, the SOHC V6 features an 11.2:1 compression ratio, VTEC valvetrain control and a dual-stage induction system contained within a lightweight magnesium intake manifold.  The V6 engine yields a linear torque curve with emphasis on the rpm range most commonly used during day-to-day driving.  The 3.5 liter meets California’s CARB LEV II ULEV emissions certification and delivers an EPA estimated 18mpg in the city and 27mpg on the highway. 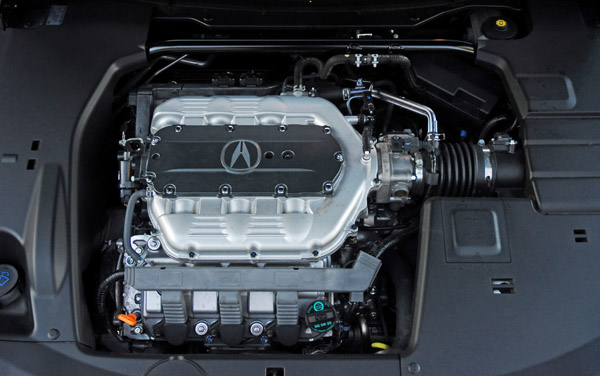 Power is channeled through a specially-geared Sequential 5-speed ShortShift automatic transmission turning the front wheels.  The transmission permits full automatic operation with intelligent features such as Grade Logic Control and Shift Hold Control, which makes driving the TSX V6 on hilly or winding roads more enjoyable.  If you so desire, the Sequential SportShift transmission can also be operated manually via steering-wheel mounted paddle shifters. The TSX V6 generates substantially improved performance for drivers who prefer the more interesting route over the quickest route.  For faster automatic shifting you can put the shifter into S (Sport) that works with the electronic throttle and engine management computer for higher revs and faster shifting. 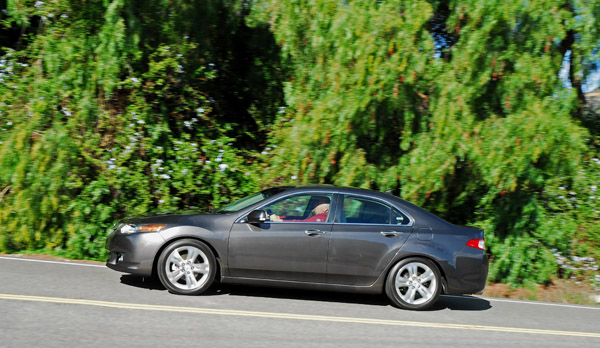 Quickly slowing the new more powerful TSX down from speed are larger, revised power-assisted steel disc brakes.  Up front are 11.8in. vented discs while 11.1in. solid discs are featured in the rear.  The new TSX V6 model also uses special rear brake pads that deliver enhanced stopping power.  In addition, the V6 model uses a larger brake master cylinder, a revised pedal ratio for a more linear feel and a new brake booster to deliver a more performance minded braking feel.  Enhancing braking even further are standard ABS, EBD and BA.  Furthering you control of the new model during spirited driving or when driving over slick wet roads is standard Vehicle Stability Control utilizing throttle control and brake control, with yaw, lateral g, speed and steering sensors for traction and stability enhancement.  You can of course shut the system down when you want to take the new model to its limits of adhesion.

All TSX models make use of a chassis that includes a closed-channel cross-braced roof structure and inside frame rails.  Along with a stronger rear bulkhead, the closed-channel cross-braced roof structure yields more rigid and vibration-resistant structure.  When I was behind the wheel the ride was always solid and strong with no noise, vibration or harshness (NVH), even when traversing poorly paved roads.

The first use of inside frame rails for any Acura model help tailor the aerodynamics underneath the car for improved fuel economy, lower emissions and reduced noise.  In addition, A-B-C-pillar separators improves TSX’s quietness over rough roads and at high speed.  The TSX V6 model features expanded use of Acura’s Electronic Control Mount system for the engine and transmission that delivers more control over drivetrain generated NVH. 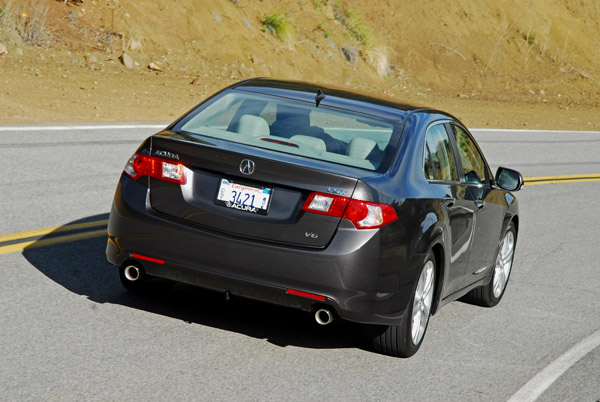 With the second-generation TSX body, Acura designers sought to retain the crisp, dynamic design of the original TSX and enhance it by widening the body overall and adding more muscular cues to create a keen-edged sports sedan.  Externally, the TSX V6 looks similar to the four-cylinder model with the exception of a V6 badge on the trunk, and a slightly revised front fascia with functional side openings for improved radiator cooling.

Just a couple of minutes behind the wheel you’ll agree that the new, V6 powered TSX is something special to drive with increased power, enhanced handling response.  You’ll feel as if you are a part of the car.

Functionality and refinement converge with luxury and style in the interior of the TSX.  Featuring a blend of sweeping, contemporary shapes, a high level of standard comfort and convenience features, widespread use of premium materials and an available Technology Package, this 5-passenger sports sedan offers the upscale modern interior that customers have come to expect from Acura, at a substantial savings.  My loaded V6 powered TSX was priced at 38,760.00, lower than any comparably equipped near-luxury sports sedan, and prices start at just $35,660.00. 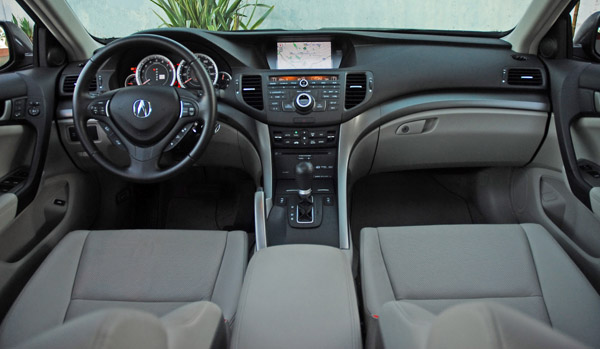 For 2010, all TSX models receive an easier-to-read navigation screen when equipped with the Technology Package.  It is recessed so that there is no sun glare making it hard to read the screen.  Also there is an improved look of telephone number text displayed on the Multi-Information Display.  I also liked the new instrument cluster with the mechanical looking gauges and floating orange needles.  All buttons, switches and dials are within easy reach and fully illuminated for safe nighttime travel.  The sporty, 3-spoke leather wrapped, tilt/telescoping steering wheel felt perfect in my hands. 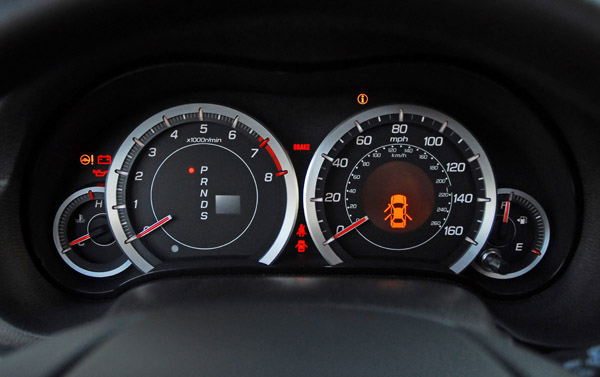 An available Technology Package delivers leading-edge electronics that make driving more efficient and enjoyable.  Features include an Acura Navigation system with Voice Recognition, AcuraLink Real-Time Traffic with Traffic Rerouting, AcuraLink Real-Time Weather and the highly useful AcuraLink Satellite Communication system.  Also included in the Technology Package is a premium audio system tuned by 6-time Grammy award winning sound engineer Elliot Scheiner.  This Acura/ELS Surround 415-watt Premium system has 10-speakers with DVD-Audio and includes Note function for XM radio that makes it easy to identify songs to recall at a later date.  With push of a button, the Note function can capture 10 seconds of up to 30 songs, along with noting text indicating song title, artist name and XM channel.  Amazing!

The Acura TSX leads the way in safety with its Advanced Compatibility Engineering (ACE) body structure.  ACE improves the dispersal of frontal crash energy through the use of load-bearing frame structures that better match the TSX with other vehicles of different sizes and with different bumper heights.  Simply put, ACE helps maximize the effectiveness of the TSX’s front crumple zones, better dispersing crash forces before they reach the passenger compartment. 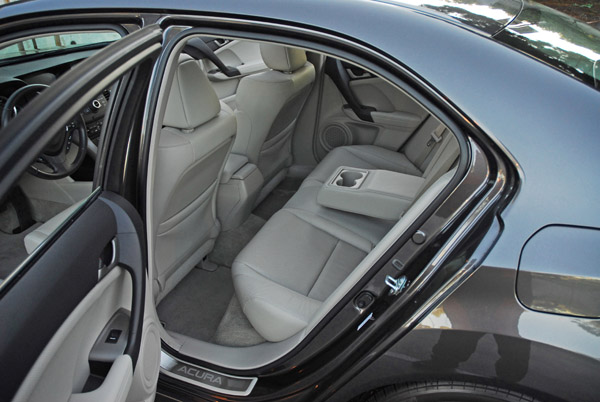 For all TSX models, a broad range of passive safety features contribute to occupant safety, including six airbags (dual stage, dual-threshold front airbags, dual-chamber front seat side airbags and side curtain airbags for outboard seating positions).  Head restraints are provided for all seating positions and the front seats employ an active headrest restraint system.  Three-point seatbelts are provided for all seating positions along with seatbelt load limiters with an integrated automatic tensioning system for the driver and front passenger seat belts.  Standard Daytime Running lights warn drivers ahead of your presence in foggy or low light situations.